There is a mistery at Villa Benvenuti. An archaeological find containing an ancient fountain, a stela but not anymore the bust was supposed to be on the top of the latter. Hunt to the historical documents to discover the truth…..

Villa Benvenuti is located in the historic center of Este, near the western side of the walls of the castle Carrararese. Surrounded by an imposing fence wall that runs along via Cappuccini, is possible to be reached by crossing the Arch of Falconetto and along the tree-lined avenue that rises gently with two bends the hill. The building, surrounded by a thick vegetation, is currently experiencing a state of disrepair. Despite this the place retains a certain charm thanks to the romantic and evocative atmosphere of the park. 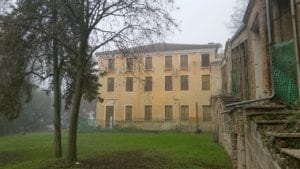 The villa takes its name from the Venetian family, who owned the property in the first half of the nineteenth century. The Benvenuti   bought it from the nobles Forsetti, which in turn had inherited in 1707 by Cornaro. Probably in the same site where there was the villa was also located the “cinquecentesca” home of Alvise Cornaro, mentioned in documents of 1537 and of which, however, there are not material of evidence except for the monumental arch that today serves as the entrance to the property. The villa, having undergone various renovations in the eighteenth century, was rebuilt around 1840 by the will of Adolfo Benvenuti and to this period dates the still existing building.

The property, since the time of the Cornaro, was equipped with a large garden, used by the Paduan patron as a place for recreation during periods of holiday he spent in Este.

Probably, in this garden of delights, the famous playwright Angelo Beolco said “Ruzante” entertained his friend Alvise acting in an outdoor theater of which today there is no trace. Instead of the park now there is a romantic imprint park, where there are several old trees: according to some historical sources the family Benvenuti took advantage of the great architect Giuseppe Jappelli for its design. Green space, originally focused on the presence of a long central staircase sandwiched between two rows of cypress trees with a fountain at its summit, was reorganized in the mid-nineteenth century according to the romantic taste of the english gardens which had become very popular even in the Veneto region.

Inside the park, between 1879 and 1880, they came to light numerous pre-Roman tombs belonging to the civilization of ancient Venetians. The necropolis of Villa Benvenuti become soon one of the most important archaeological sites in the area and all the findings coming from its graves were moved to the National Museum Atestino, where still are exposed. The most important piece of the collection is undoubtedly the so-called situla Benvenuti, funerary container made of finely embossed bronze, a real masterpiece of Venetic art and therefore chosen as the emblem of the archaeological museum.

Right now the mansion, owned by the foundation that manages the nursing home Santa Tecla, it is set in a huge park .
Until a few years ago the villa and the park, which is located on a hill overlooking Este, had been abandoned, and it was feared that everything could be lost. Then the volunteers of the atestina Scauteste Onlus arrived, who have signed an agreement of use with the foundation . With various funds, financing and hard work, the group has polished the park and part of the structures. The villa Benvenuti, in fact, makes chapter in part to a series of costly complications. But the old stables and other outbuildings have returned to their former glory.

The nicest part of the whole complex is still the park where the association has brought to light three fountains, which, according to historians, had gone to replace an eighteenth-century staircase. The jappelliana revolution of the park led to the cancellation of the staircase and the construction of the three fountains. One of these has been restored by volunteers Scauteste, which in the tub now in ruins they found a pillar of stone. On this stele the ancient documents shows it was a statue. It was probably a bronze bust, which unfortunately has been lost and which is open in the town a dispute. The curious can visit the site, also seeing the crib built by the association in the fountain. 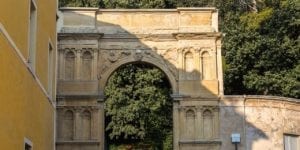 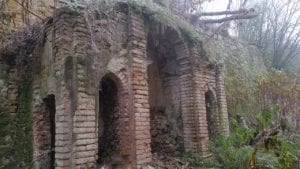 Not really safe to get inside. In totally “state of decomposition” is better to look from outside rather then risk your life indoors, even because by now nothing is left , only rubbish and dust. 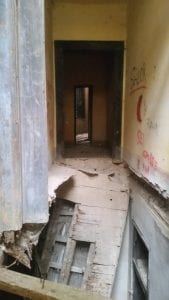 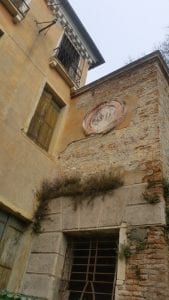