The hospital is located in Lamac area of Bratislava, out from the city. We entered it from one side, where there were no guard, and the entrance was free without any fence. But from another side, where we excited, there was guard with a big dog. They say, that the guardians were put after 5-year old boy felt from the roof of the hospital.

Today is 1985 year, the weather is good, Czechoslovakia is in the prime of her life, communism is flourishing. Authority of the county decided to start the national project involving Faculty Hospital, lecture halls for young doctors, laboratories, dormitories for the students and other civic amenities. It was even planned to build apartments for the employees.

And everything, just in 5 years! 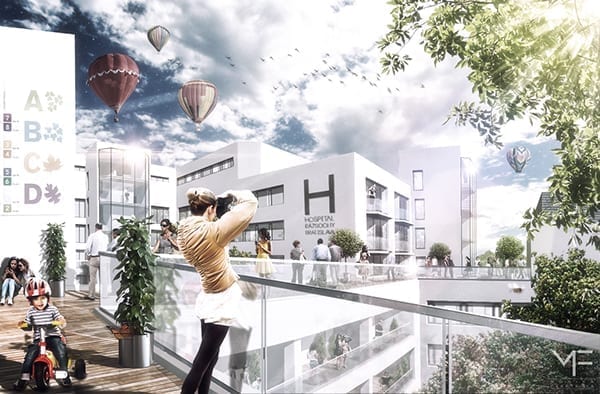 (How it could be, designed by Monika Feketeova)

In 1997 the government decided to extend the project, and include the intensive care unit, heliport and driveway ramp for vehicles for emergency cases.

In 2000 the works completely stopped due to some financial problems (after the collapse of Czechoslovakia in 1993 it wasn’t easy for anybody to finish such a massive project).

In the building of the hospital almost 65 millions of euro were invested. The state after more than 30 years of incremental investment argues that there are money for completion the building. For example, in 2014 the government led by Robert Fico approved the construction of a new hospital in the nearby area for two billion euro.

In 2001 some activists of Lamac area tried to save the building, they wanted to complete the shell construction at least as a scientific and technological park. Unfortunately, unsuccessfully.

When you get inside the territory, you see the big forest. Walking, walking, and then suddenly you see this concrete monster: just like a tincan – structural frame and outer walls. In some parts has been installed ventilation and windows, boiler room was completed at 90%. In a highly stage the transformer station and sewage treatment plant were completed.

Like the abandoned hospital in Zagreb, the building is enormously huge. Though it’s a little bit more interesting to explore. Inside you can find different interesting graffiti on the grey walls and empty cans of spray.

It’s really pretty to come here in the summer or in the autumn…the weather is good, and you just lay down on the roof, and enjoy the gorgeous view from upside, which stretches for many kilometers ahead. Everything is green around…the sun shines…birds are singing…all above makes it as a really cool place to hang out with the friends and drink some beer together. We also wanted to set the tent on the roof, but other abandoned buildings in Bratislava were calling us keep moving ahead!