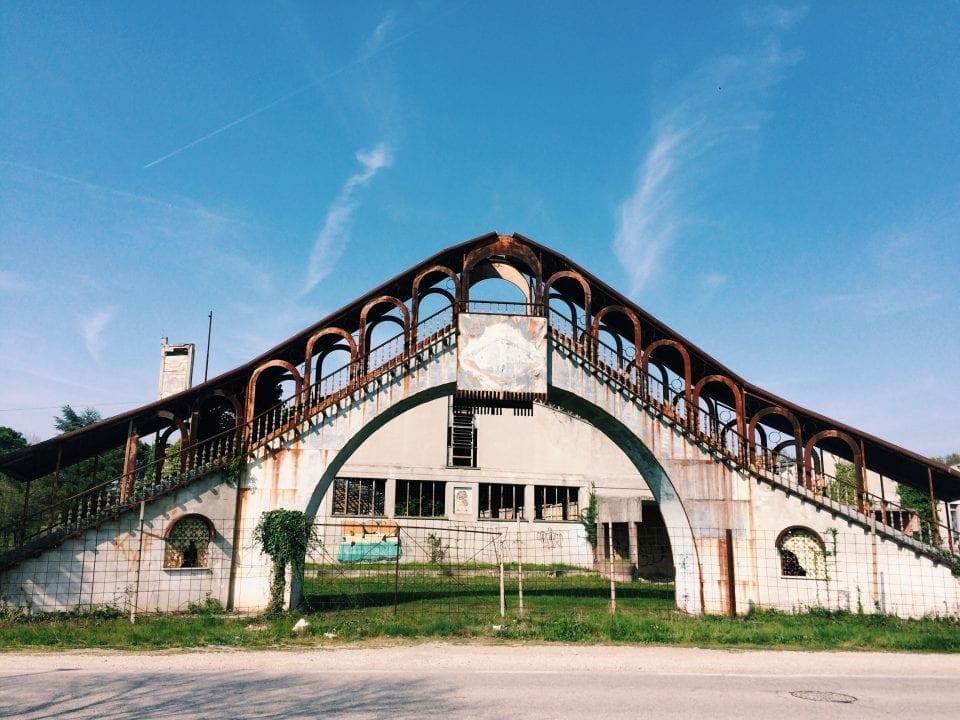 What do you know about one of Italy’s most glamorous region – Veneto? Maybe you know about Venice and San Marco square, maybe you have heard about romantic city Verona, if you like skiing you could hear about Dolomites…. But what is hidden behind this mask? Maybe tons of abandoned buildings?

After an amusement park in Berlin, today we will again visit one. This time in Veneto region of Italy.

Veneland is located in the zone of Mogliano Veneto, which is called Marocco. Go to the street Marocchesa, and there you will find this abandoned park. It is fenced around, though there are some holes in the fence where you can easily sleep through.

The park Veneland was born in the mid-seventies. At this time people were especially interested in visiting small amusement parks, as long as they couldn’t afford going to the USA to see Disneyland.

Veneland had an ice-rink, video-games, pizzeria, bar, hall for events, and even a small zoo. Also outside there was the barbecue area. Did they need something more in 70-s to feel absolutely happy?

Additionally, park had reptile house, aquarium, and other attractions, which were typical for travelling shows (as long as founders of the park enjoyed a lot these kinds of shows!). Also you could find here some real thematical zones, like “The Fort”, “Western Village”, “Cow Boys” shows, and horse riding.

The park Veneland was really famous among the citizens of Mogliano. They still remember the articles from the newspapers about queues and traffic jams of cars, which appeared every weekend.

The park was closed already in 1980. The reason for the closure was the fact that the various stakeholders were not satisfied with that money that park was bringing. Though we should notice that the park already after the second year started to bring money (this was usually impossible at that time)!

When the founder of the park tried to encourage members, and tell them that park was successful, and that much more people will come with the time, the stakeholders didn’t listen to him. They preferred another strategy, popular at that time, putting their money to carrousels, losing instead a unique opportunity.

There were 2 other banks that wanted to replace stakeholders and finance big and ambitious project, though the founder of the park had some family problems. So banks gave up putting their money in this great project.

The Rialto Bridge is greeting you at entrance. It is a prototype of one of the most famous venetian bridges, though it is not possible to come up, and see from there all the park.

Except the bridge, you can find inside the territory abandoned house. Exactly here 30 years ago were located all of the attractions… “Macchine Bella Epoque”, “Treno del Safari”, “L’Arca di Noè”… what a beautiful names of attractions that you could find before. Now the building stays completely empty, just graffities are reminding that people are still visiting this place.

Behind the house, we have found a small artificial lake with the boat full of overgrown wild plants. Maybe here before you could find zoo… Now just wild birds are left inside this place.