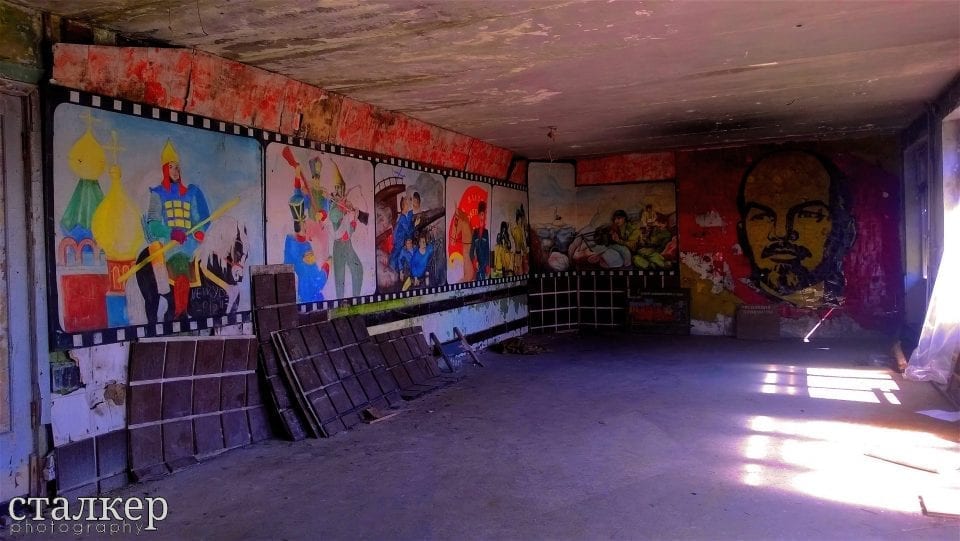 Two people, one woman and one man, the last one without hand and the woman with burned face. They should have a grey jacket with dirty and ripped trousers, sitting both on old chairs at the both sides of the entrance. Just one purpose was in their mind: to not let anyone to get inside!

Only a bribe could convince them to let come inside, no one will know what could happen to you if you would refuse… Who knows, how many of them are waiting behind the wall? This is what some people who has visited Skrunda have told us….

Skrunda-1, also known as Skrunda-2, is a ghost town and former Soviet radar station, located 5 km to the north from Skrunda, in Raņķi parish, Latvia.

To get inside you need to pay the people who are guarding the entrance, 4 euros each one. If you don’t want, just turn all around the town and from the wood or from the grass you will be able anyway to reach it. When you will be inside you will not need to worry, guards are just waiting outside. 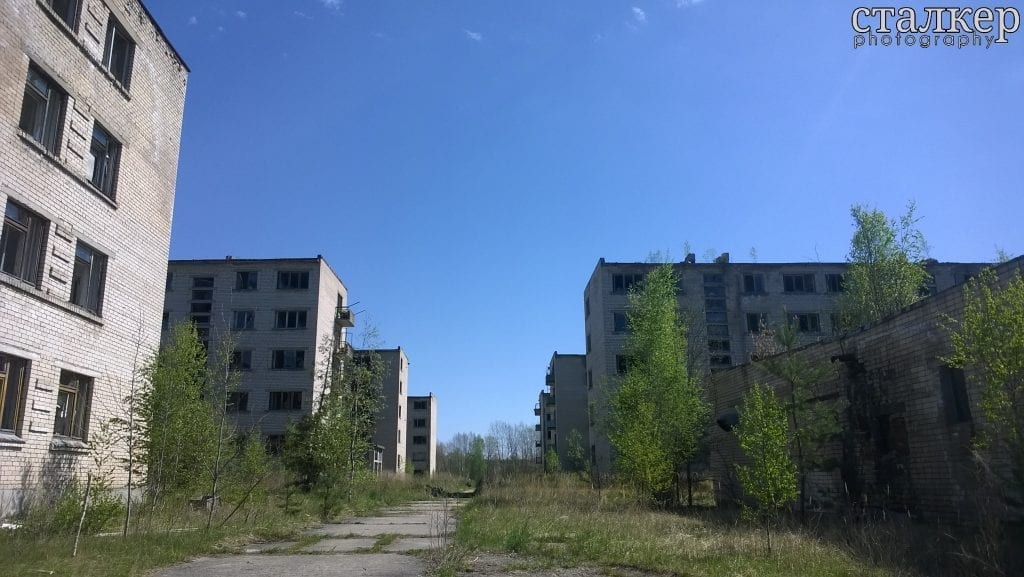 A Daryal radar was built before the collapse of the Soviet Union, in the 1963, by the Soviet Union’s 129th independent Radio-Technical Unit. Skrunda was strategically important as its radars covered all Western Europe. The two barn-like radars were one of the most important Soviet early warning radar stations for listening to objects in space and for tracking possible incoming intercontinental ballistic missile, feeding then back information to Moscow.

According to an agreement on the Legal Status of the Skrunda Radar Station during its temporary Operation and Dismantling, signed by Latvia and the Russian Federation on 30 April 1994, the Russian Federation had been allowed to run the radar station for four years, after which it was obliged to dismantle the station within eighteen months. The deadline for dismantling was 29 February 2000. Russia asked Latvia to extend the lease on the Dnepr station at Skrunda for at least two years, until the new Volga station under construction near Baranovichi in Belarus became operational. Riga rejected these requests, and the radar was verified closed on 4 September 1998 by an inspection team from the Organization for Security and Co-operation in Europe.

The demolition of Skrunda was sponsored by the United States the main nuclear revival of the USSR, as they paid 7 million US dollars for the destruction, while the US-based firm Controlled Demolition, Inc. was hired for the destruction job.

In a joint New Year 1998 statement, the presidents of Estonia, Latvia, and Lithuania urged Russian President Boris Yeltsin to complete the pullout of all Russian troops from the region, as Russia had promised four years prior in 1994. All materials of value were removed from the site and carried back to Russia when the last Russian troops left in 1998.

What is hidden inside Skrunda?

Covering an area of 100 acres, Skrunda-1 featured ten apartment blocks, a school, a theatre and a gymnasium; the community had shops, administrative offices, canteens and even an officers’ club. There were military barracks onsite, a water tower, boiler houses, machine workshops and pumping stations. In its heyday Skrunda-1 hosted more than 5,000 people.

Skrunda-1 was one of the many secret cities omitted from maps or road signs, and some of them even went nameless. They would be designated instead by the name of the nearest town combined with a special postcode: so there was Chelyabinsk‑65; Arzamas-16; and in the Soviet Socialist Republic of Latvia, a military complex known only as ‘Skrunda-1.’

In 2008 the Latvian government decided to sell the Skrunda-1 site, and on 5 February 2010, the entire 40-hectare former town was sold as a single lot at auction in Riga. The winning bid was by Russian firm Alekseevskoye-Serviss for €2.2 million. The auction, which lasted two hours, was also contested by another Russian firm, as well as a bidder from Azerbaijan, so the town was reauctioned.

In 2015 the site was bought by Skrunda Municipality for €12,000. Around half of the area has been handed over to the Latvian National Armed Forces as a training ground. The remainder is to be leased by the local government with the stipulation that potential investors develop the area economically. Demolition of selected derelict buildings has since commenced. 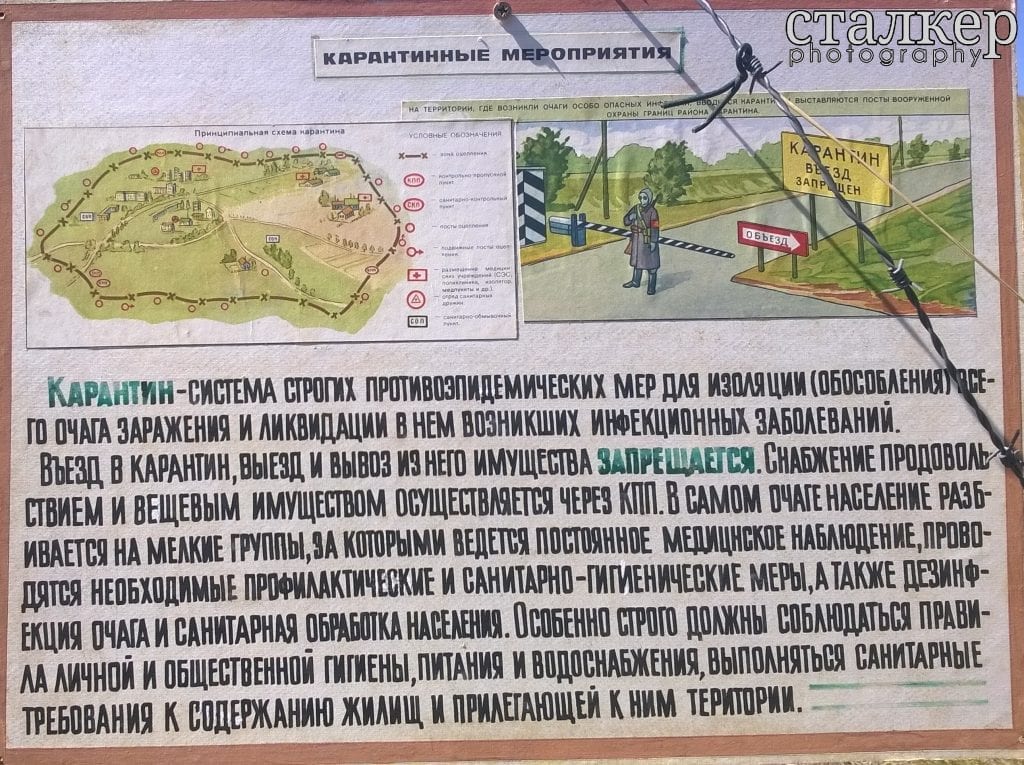 From February 2016 in response to increase interest at the site, the municipality began charging an entrance fee of 4 euros for individuals. Now what wait Skrunda is just an uncertain future. For sure its potential has been severely underestimated, as already other many abandoned sites has been transformed in museums, bases or touristic sites.

Our exploration dates back to May 2016. Sources passed on to us by other explorers tell us that Skrunda has now become a training camp for Latvian troops, so it can no longer be visited.

Oh wow what a spectacular entrance!!!!!

-Are we in Chernobyl, Giovanni?
-No, Jacopo, this is Skrunda-1…. 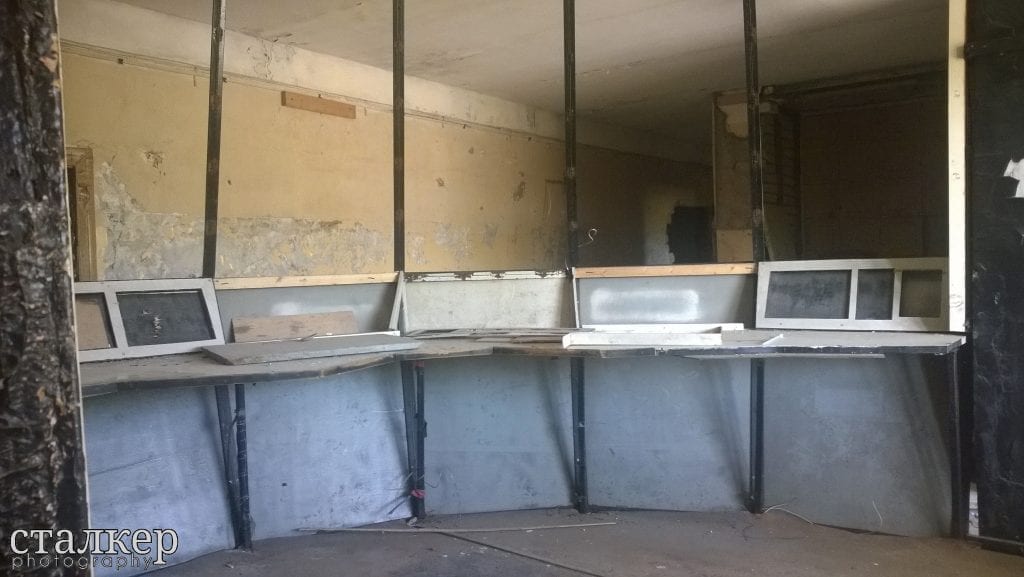 Me and my friend arrived in the early morning in Skrunda-1, after hitch-hiking a car directly from the town of Skrunda. The guy left us right in front of the entrance to the ghost town, barred by a rusty gate used before as a military checkpoint. Behind that, raising from the ground the rows of the former concrete apartments blocks.

Two people, one man and one woman, were waiting inside a car. We came there and we asked for two tickets – as the driver already told us about the necessity to pay in order to be inside, and the man in addition gave us a map of the town (in fact, nothing of special, more similar to a work of a baby). We passed the rusty gate walking instead through a door straight through a brick wall and, in front of us, there was a huge and large space sprinkled of broken concrete cubes and weeds.

Plenty of abandoned buildings and with a whole town spread out ahead of us, it was difficult to decide where to start. So we began from a normal abandoned building on our left and then turned all around the town in counterclockwise. 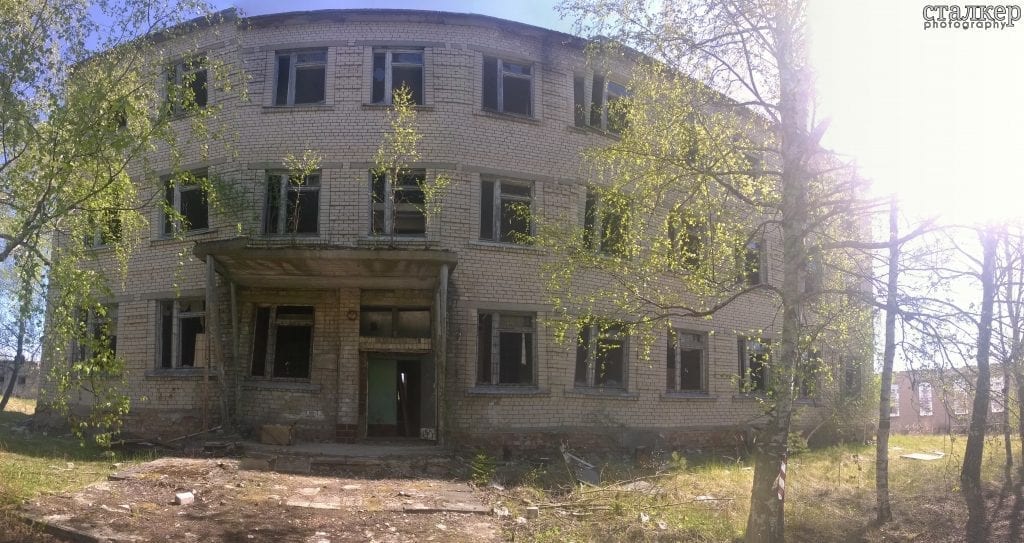 From outside the edifice was enough easy to read, it was a school. Steps led us till the darkened corridor feeding off into classrooms. Empty frames hung side by side on walls; chalkboards covered by dust and graffiti, everybody was absent today at lesson… Broken windows, broken bottles, clothes left on the ground, traces of fires previously made by local people and the situation was exactly the same in all the settlements.

It was clear that the place has seen lots of vandals, plunderers, though most of the decay looked like the action of the elements. The school was stripped from everything it had, survived just broken furniture and empty shelves. Rot and water damage was everywhere, the floorboards no more than a soggy mess in places. 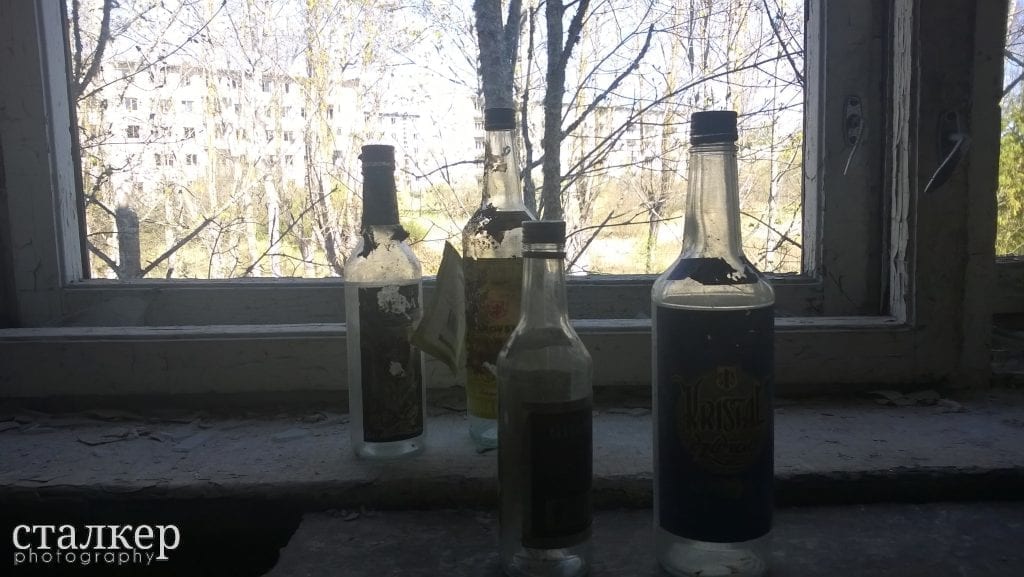 Following the stairwell up, I soon found myself stepping out onto the rooftop, a black and horrible expanse of matting. The sun overheating the material produced a bad smell not letting even the joy to sit and enjoy the view. Continue moving we entered in other edifice, probably an abandoned store, where they were leaving weapons and other kind of weaponry. 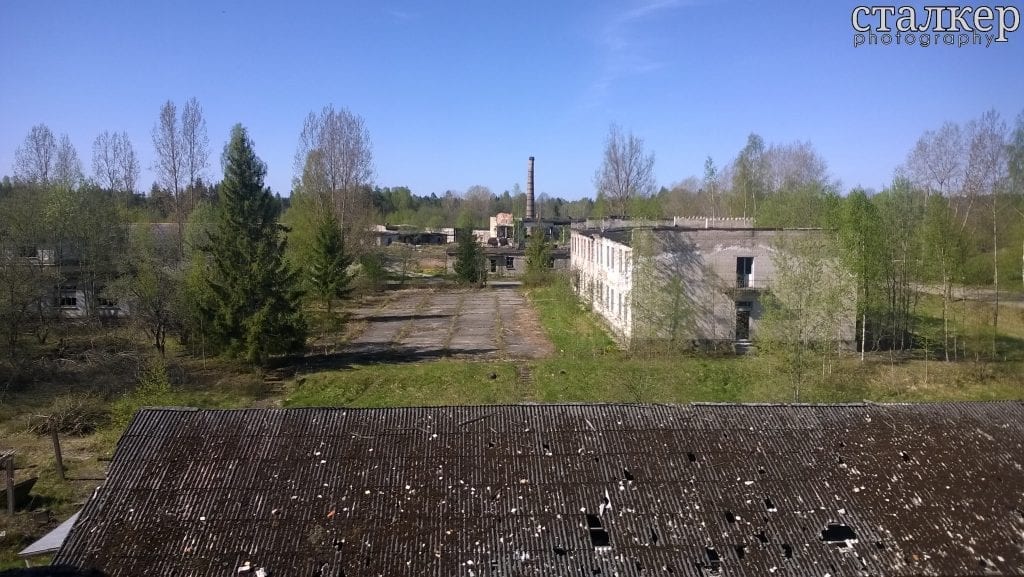 Further from the centre of the town, almost to its perimeters, barbed wire surround and protect Skrunda-1. A bunker springed out from the ground, hidden by a thick vegetation. Inside immediately we felt the temperature leap, at least 10 degrees minus than outside. The air was thick, full of dust and hardly was to breathe. Long tunnels were leading us somewhere, we didn’t know where… what was pushing us to go on was the excitement and the curiosity to discover something of completely new.

We run across in several weapons store when we finally found a staircase from where we could reach the outside world. On our way to the water tower, easily recognizable from far away, we visited other buildings. Nothing left there but still we didn’t want to miss anything from what was there, everything should be visited!

Unexpectedly, somehow, we arrived in the center of the town, where people in uniform – probably from army or maybe tourist guides – were waiting other people. They started to talk to us first in Latvian, then in Russian and when finally they understood we were newcomers from other countries they tried to say something in English. From what we could comprehend they were trying to explain something about the history and, after they entered in small house close there, they also showed on their map the main “tourist attractions” and how to reach them. We were close to theater so we moved there. We immediately have been welcomed by the familiar face of Vladimir Lenin pictured in a yellow and red mural. The remaining wall was painted with different historical scenes all along the watchful eye of Lenin. The next room was the theatre with a wooden stage and green drapes falling down from the walls. From here we moved to the main street where we could admire in all its entirety Russian architecture. No much time was left and we had to hurry. After walking next to all the blocks and taking 100 pictures of us we decided to enter inside one.

Endless corridors, many doors, memories of a past which is running fast in our minds projecting pictures of people and their daily lives. The apartments were simple, but enough spacious to host a family. Journals left trampled by our own foot tells facts about Russia which right now doesn’t exist anymore. After reaching the last floor I came closer to the window, then moved to the decadent sill. From up was easily understandable the alien quality of this place, residents who had everything they would ever need at walking distance. Blocks all the same following with the logic of host people, without any care about aesthetic beauty.

When the sun was up on the sky it was the time for us to go, leaving this decadent place for the next explorers. Now, twenty years after, it was hard to distinguish one demolished feature from the next – and the areas of the complex that had once played the most significant, sensitive roles, were little more than rubble, husks and weeds.