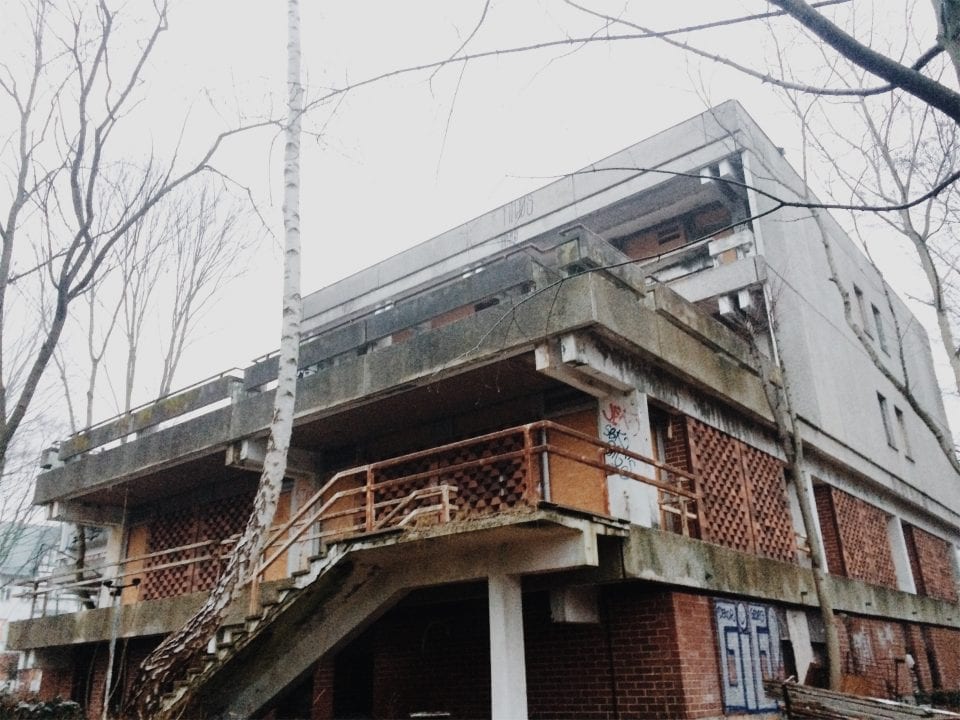 Already from the title you can guess that today we will visit the place somehow connected with the ex-president of Iraq Saddam Hussein. Maybe in this place you could be really invited? And you can really visit it? Well, if you are in Berlin, why not! Don’t miss this opportunity!

The former Iraqi embassy is located in Berlin-Pankow part, Tschaikowskystraße 51. Before I went there I’ve read some information about the possibility to get inside. Each site was writing that now it is impossible, every door and window are barricaded. Though I decided to go there any way. And not for nothing.

Near the parade door there was the wooden plank, and half of it was missing. It seems like people are still not losing the interest to visit this place.

As always be careful! There are residential buildings around, and neighbors could call to police.

The Iraqi embassy was built in 1974 in the part of German Democratic Republic. It was stated that Iraq is allowed to use this territory for the indefinite period. From the territory given to embassy (5.000 square meters), you could understand the size of relations between Soviet Union and Iraq. Iraq was first not-socialist country, which recognized GDR as a diplomatic state in 1969. Also it was believed that GDR was offering to Iraq scientific help, including the development of nuclear and chemical weapons.

In 1980 the secretary of the embassy and the head of Iraqi intelligence were caught red-handed collecting a suitcase full of explosives! It was said that they wanted to attack Kurdish people in the West Germany. Later they confessed that the order came “with special greetings from the president of Iraq” – directly from Saddam Hussein.

After that in 1990 the newspaper Junge Welt wrote that, according to an Iraqi informant, the embassy was used as a storage of explosives for terrorists. After that the embassy came under scrutiny. Though the times inside Germany were developing really fast and it was no time for investigating Iraqi embassy. In 1990 Germany was reunited, at the same time started the first Gulf War, so Germans decided to put away from their country Iraqi embassy. The place was left in a hurry: without packing documents or even closing the doors.

A unified embassy was collected and reopened in the “Western” part of Berlin – on the Pacelliallee 19-21 in 2003. About the old one everybody, except explorers, has forgotten.

Due to some reports of another Stalkers you can see that before in Iraqi embassy you could find lots of things! Portraits of Saddam Hussein, different documents in Arabic typing machines from GDR times, cassettes with speeches of young Hussein, different anti-Iranian propaganda maps.

But now… there is unfortunately completely nothing left. Fire destroyed everything. There are some funny graffities, but nothing more.

But anyway the place is used by many people for making parties! (Who would refuse to make a party at Saddam’s house?!) When I was there, I have found loooots of bottles of bear. Later I have found in news that in 2009 the place was used by Australian journalist Joel Alas to organize a big party! More than 100 people accepted his invitation to come.

“We wanted to organize an event, so that the visitors could experience this lively museum before the place finally disappears. Every time I visit this embassy, I feel less, as well as I find the building in even more desperate state.”

Apart from parties there is completely nothing interesting to do in the embassy. Everything of value or interest has been removed. Though as for me the thrill of visiting this place laid in its name…

Today I have been in abandoned Iraqi embassy, and it was a good day.