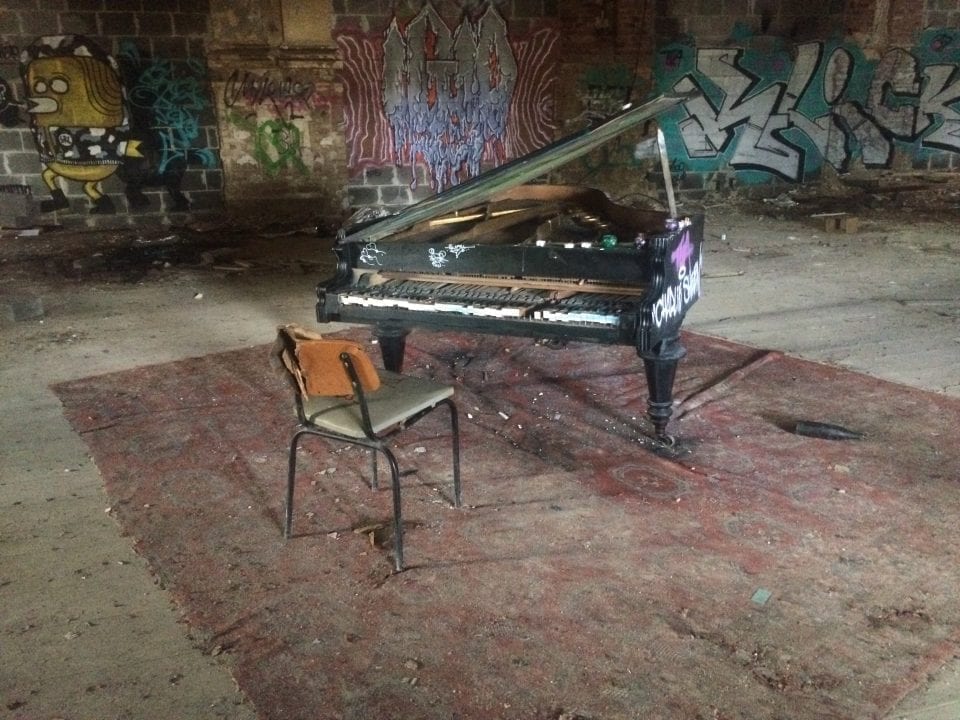 Would you like to feel, how was the first ball for Natasha Rostova from “War and Peace” of Leo Tolstoy? Or to see what kind of dance was popular in times of Scarlett O’Hara in “Gone with the wind” of Margaret Mitchell? A little piece of that dancing epoch you can find inside the Grünau Ballhaus in Berlin.

Ball house is located near metro Grünau.  After metro you need to go straight on by the street Wassersportallee, and then turn to the Regattastrasse.

There is no way to come inside from the parade entrance. So, you need to go to the back side of the building (you can find some holes in the fence also there). It is needed to say that there are two buildings on the territory, and in both of them you can come in through some holes in the windows.

The first dance took place in Grunau in 1890. The place was built as the response to the growing need of Berliners to have a variety of leisure activities. As long as it was the time when a good party was in a big demand, that’s why more and more clubs were appearing.

In 20s this place appeared to be the center of culture and chic. For musicians it was a big honor to play here. The Ballhaus was located near river and had its own pier. So sometimes boats took the dancers down the Dahme river up till some beer gardens.

Luckily the ball house was not somehow damaged during the Second World war. Though it has lost some of its magnificence during the GDR time. Nevertheless it was attracting lots of people, mostly during the weekend.

In 80s here was opened Disco, so much popular at that years. And this was the beginning of the end for this pace.

Later again came the Reunification of Germany, and can you guess what happened with this place? Well, as it already occurred to several abandoned buildings in Berlin, reunification meant the end to the Ballhaus. Grünau Ballhaus doesn’t receive any visitors from 1991.

After the abandonment, there were several companies who wanted to buy this place. It was decided that companies can demolish the buildings just if they preserve the large ballroom and art deco facade. For this preservation they needed to spend around 15 million euros, so nobody wished to buy this land.

There are two billings on the territory: Ballhaus Riviera and Gesellschaftshaus Grünau (social house).

I should say that the second building is useless to visit: there is completely nothing left inside. Though if you still have decided to go – be really careful, it’s really dangerous to be in, as house could collapse in any minute. By the way before it also had an impressive ball room, bathhouse and sporting facilities. It was at one point as popular as Ballhaus Riviera, but not anymore.

What is the most interesting – the ball house itself. When you get in, the first you see is a huge Ball Room… Close your eyes, wear your beautiful dress and turn on the music. Vo-a-lia! Everything lives again here, just dance-dance, and don’t stop!

In the ball room there is even piano and chair left, so if you don’t have enough imagination to see the music – just create it!

And then, when you are tired, go through the rooms that are left: there are still some elements of decor from that time. Enjoy!

Before coming here I have looked through some photos of this place and have found out that now a lot of things are already in the past. This place is already pile of ruins, what will be with it in several years or even months?

So I would totally suggest visiting this place now, if you are staying in Berlin. Later will be already late.