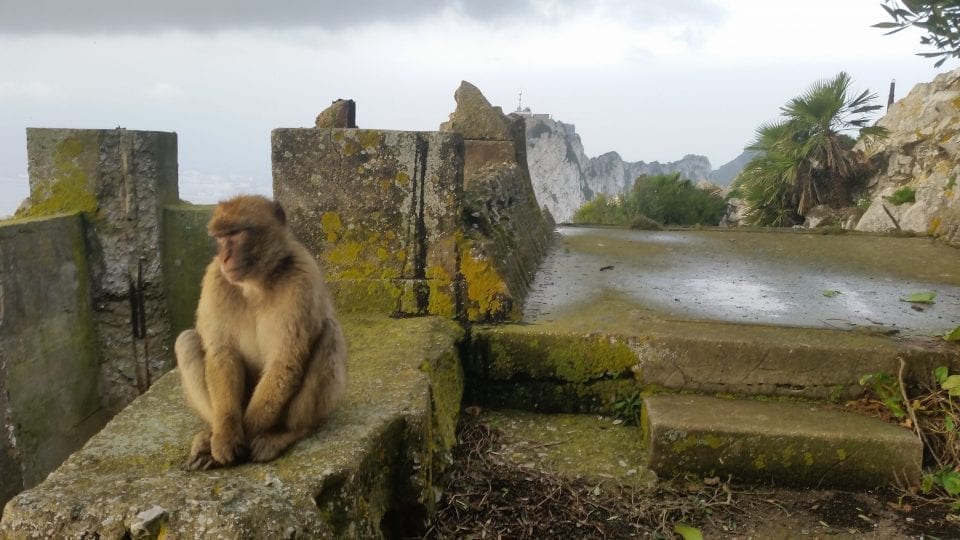 Humans and apes were leaving peacefully till when, one day, the latter decided to appropriate of what the man left behind himself. – If human beings will not take this place then we will do it! – Said by an ape:D.

!!All the pictures I took show military installations, bunkers, batteries and observation posts from both First and Second world wars!!

How to get there

Today Stalker is in Gibraltar! Gibraltar is a British Overseas Territory and headland, on Spain’s south coast. Dominated by the Rock of Gibraltar and, the latter one, in turn dominated by ruins, abandoned fortresses and fortifications.

Almost everywhere here you can find abandoned/forgotten places, accesible or not, so there is no  need to put the location: it is everywhere!

The six square kilometres of the Rock of Gibraltar are steeped in history, from the very beginning around 100,000 years ago when primitive humans and Neanderthals fished the shoreline and inhabited the limestone caves, to visiting Phoenician and later Roman sea farers. It was the Moors of Tarek ibn Ziyad however that first settled the Rock in 711AD, and since then, this much-prized site and its people have witnessed many sieges and battles over the centuries.

The position of Gibraltar guarding the entrance to the Mediterranean is unrivalled, and has for many years been fought over by Spain, France and Britain, all claiming possession.

Gibraltar’s unique position proved invaluable during World War II. Most of the civilian population were evacuated, except for 4,000 who fought with great courage to defend the freedom of the Rock (the repatriation of the civilians started in 1944 and proceeded until 1951). Control of Gibraltar gave the Allied Powers control of the entry to the Mediterranean Sea and was a key part of the Allied supply lines to Malta and North Africa and base of the British Navy Force H.

Germany planned to occupy Gibraltar but the operation was cancelled because the Spanish government was reluctant to let the Wehrmacht enter Spain. Gibraltar harbour was also attacked many times by Italian commando frogmen operating from Algeciras.

Why monkeys in Gibraltar?

An earlier theory, now disproven by the DNA evidence, was that the original Gibraltar macaques were a remnant of populations that had spread throughout Southern Europe during the Pliocene, up to 5.5 million years ago.

There is an old superstition that if the Apes leave the Rock; the British will go as well. Sir Winston Churchill made sure during World War II that the number of Apes was kept up. He even had some Apes, so it is rumoured, brought out from Africa to maintain their numbers.

Another story links Gibraltar to Africa by a subterranean passage over 15 miles (24 km) long which begins at Lower St. Michael’s Cave and passes under the Strait of Gibraltar, and the Gibraltar Barbary macaques entered The Rock from Morocco this way.