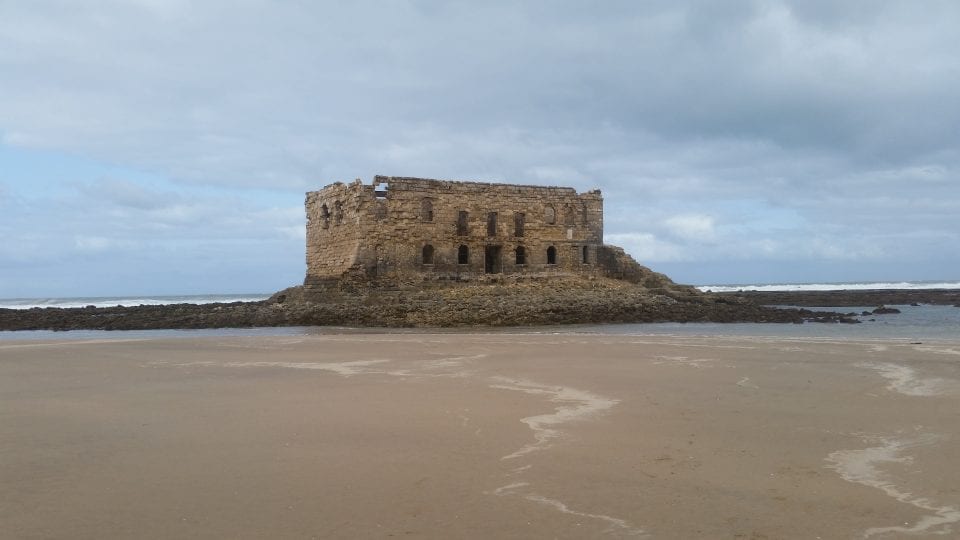 Have you ever dreamt about of a remote place? A house where you could escape the city and dive into the tranquil surroundings? Perhaps you are looking for a stone house in the middle of ocean?…

Tarfaya, Morocco. Easy to reach and easily visible from the beach. No worries about people around because right now this place has become a tourist attraction for everyone. Just pay attention at the tide and consequently at the clock. Not only your trousers could become wet!

It was 1882 when Tarfaya was occupied by British troops, and Casa del Mar was built. Casa Del Mar, meaning the house of the sea in Spanish, was once inhabited by more than 400 British businessmen who were deployed on the shores of Trafaya in 1876. They built Casa Del Mar as a commercial centre for their business exchanges with merchants from distant African lands. The Sahrawi tribes urged the intervention of Sultan Hasan I, who in 1885 bought the building. In 1912, the territory of Tarfaya, at that time called Cape Juby, was occupied by the Spaniards as belonging at the Spanish Sahara.

The tides of the ocean fill its rooms with every waves. In vain I waited for the water to leave the house so as to be able to reach its inside.

I understood from Legzira beach that the ocean is a completely untrustworthy being if only you are not in touch with it. Can hug as can overwhelm you, can cuddle as can drown you. Unpredictable.

Crossing the thin strip of earth that now separated the sand from the rock, I wet myself. I was joked by the wave which was waiting me behind the house. Not bad as it was quite hot at that time although the windy weather. Down part of my body was wet and the up part covered by sand, stuck in my hairs.

With bare foot was quite painful to walk on the rocks where also the floor inside the house was filled by. Out of the house an old plate where engraved on the wall.  A date(1882), the name of the colony and the names of people who probably colonized Tarfaya were written up on it.

Indoor everything changed. Perception, smell and sensations up my foot was different. The brackish heavy air I was breathing was coming deeply inside my lungs, and then slowly outside of my nose. Slippery, jumping from one stones to the other, paying attention to every spot I was stepping on.

Looking right through the broken roof at the sky, it was possible to glimpse at the clouds of sand dancing and moving around. A guy, whom before I didn’t notice, was there, came out from one door of the first floor and with a salam alaikum he greeted me. I answered in the same way, even though I didn’t try to ask anything about how to get there and something about the history of the house. In fact there were no stairs and the wall, wet and without any support, was quite hard to climb. 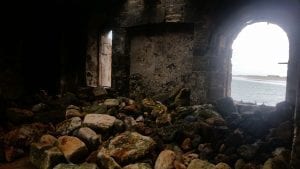 Rooms mostly dark enlightened by windows or holes on the walls. Dark also the future of this beautiful historical monument that has survived to the power of storms, wind and time.