Again Africa, again Morocco. Today Stalker is in M’Hamid, a small village in Zagora region of Morocco. Situated 98 km after Zagora, it is one of the two places in Morocco where Sahara begins (another one is Merzouga).

Coming from Zagora, through the only existing road, at the beginning of the village and on the right you will see the abandoned hotel. No worries for people around during the day because of hot weather all Moroccan will be at home drinking a cold mint tea:D.

Firstly the building of  Hotel belonged to the Royal Moroccan Armed Forces. Then in 90th many tourists were interested in visiting desert, that’s why in M’Hamid started to appear first hotels. Hotel Iruqui was one of them.

The owner of the hotel, named Abas, was a doctor, born in M’Hamid, but whose parents were from Western Sahara. He himself was married with a Swiss woman. In the 2007 the doctor moves away with his wife to Switzerland in a search of better life, and the hotel  slowly-slowly started to degrade.

The Sahara is the largest hot desert and the third largest desert in the world after Antarctica and the Arctic. 35 degrees and no one in the street. Warm, hot, distressing warmly absorbed slowly from the clothes, warming inside and coming out again like the gas of a pressure cooker. Salvation comes only from the narrow spaces where shadow hides from the sun. The Tuareg knew well how and when to move, on the other hand they were born in the desert.

Fortunately, we do not miss the water and there is still little left to get to the gas station from where we will hitchhike for Zagora.

“The desert is a hostile place, perhaps too much for a couple of young rookie foreigners,” says Nastia, my companion.

-Ah could be because you’re Russian and – as is well-known – in your neck of the woods is the cold who rules. You’re not used to such heat, I say with a dry voice.

After an hour of walking we see the gas station. Once in town, the situation becomes more livable, even if Moroccan people not even the trace. When the midday sun is strong and straight on the nape, the best thing to do is to sit at home in the company of a refreshing mint tea.

A few meters before our starting point for the hitchhiking, on our left, an abandoned building. Approaching I see the sign: hotel Iriqui. Ah, finally something abandoned! Nastia wait out in the shadow, while I went to see one of the few abandoned sites in Morocco.

Inside from a window left open I immediately notice that there are two other doors gouged to the side of the structure.

Sand everywhere: above the desk bench, on the floor, on the fixtures, on the door handles …

On the ground floor there are several bedrooms with two bathrooms and showers at the end of the corridor. Even sinks and bidets overwhelmed by the desert wind leave sand drops instead of water. On the other side of the hotel, always on the ground floor, the kitchen and the warehouse. Tajines, dishes and cutlery remain a testament of a past of a Moroccan cuisine. In the warehouse, thrown in bulk, there are boxes, tables and chairs. 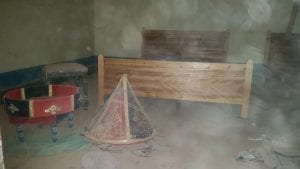 Outside, two palm trees rest over each other, a sign that the sun does not grant any respite to anybody. A black spot stuck in the yellow wall shows a porch, with old wooden stairs that probably lead to what once was basement.

On the first floor, climbed up the stairs, I find myself surrounded by walls of  reddish colors typical of the Sahara areas. On the ground white plastic chairs. Ahhhh how much I would like to relax here, in the shade with a beautiful mint tea…

Unfortunately, time calls us and it would be rude to make it wait, in the evening we needed to reach Marrakech. 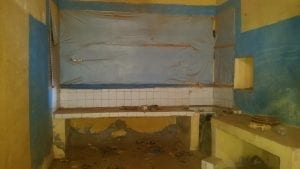 Lopatinsky Mine
Catacombs of Paris - Museum
The Human Zoo