Which sparkle with the florid of dawn,

And they switch off with the death of the sun.

The abandoned villa is located in Battaglie Terme. Taking the state road 16 direction Este-Padova you can see it on the opposite side of the canal. The place is easily accessible from fields and there are open doors at the sides of the property.

In addition to various astronomers and scientists, was living there also Jacopo Dondi, he built the clock overlooking on Piazza dei Signori in Padua.

The probable date of construction of the villa is most probably 1552, which also appears on the façade of the villa. Already owned by the Dondi dell’Orologio and then by the Wollemborg (rich Paduan Jews of German origin, owners until the 1920s of much of the current Giarre), was subsequently purchased by the Sgaravatti family of Padua, which used part of the land in front of villa as a nursery. The turret is supposed to have been built in different ages: the part containing the staircase ends with a cornice that reproduces exactly that of the eighteenth-century construction, while the upper one by type of the external stairs, the railings and the belvedere can be framed in the nineteenth Romanesque. The interior of the villa has undergone considerable renovations until the early 1900s (bathrooms, service rooms), the east staircase was erected and some windows were covered. The north facade is free of plaster because an iris has been removed that in the past completely covered the masonry.

A tower stands high on the rest of the villa, out of reach by nature and by its guardians. A cute little group of bees decided to make the nest on the top of the staircase and we, without being rude and without disturbing, head back.

The horseshoe-shaped villa at the center has a small colorful church. Inside “she” presents herself completely bared and naked to us, young explorers. 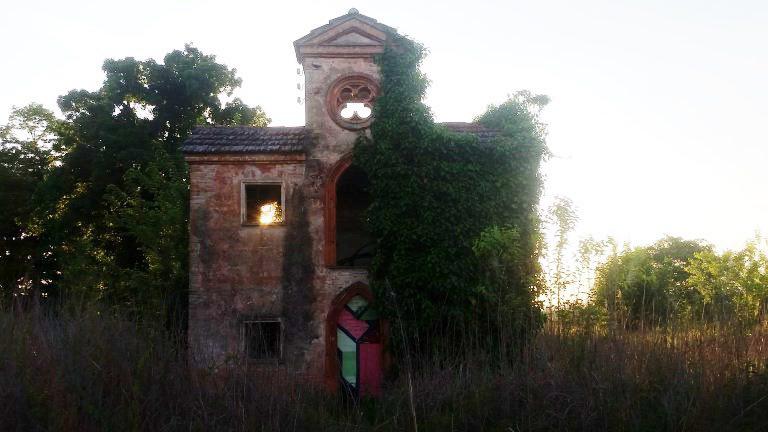 The portico on the left has some testimonies of a previous agricultural life. Tools and machines for plowing land, unused fertilizers and bricks are left in the wake of time. And here’s the dog’s house: the little animal who lived there, no longer having to guard something of abandoned, decided to follow the master’s fate and leave behind itself everything.

Inside the structure we bumped in empty spaces and colonnades, used as storages for goods and probably also as a farm for animals. Damned for wine made room for dust. Tables before filled with local delicacies and specialties right now present themselves as garbage and garbage baskets. Someone occasionally spends nights in this desolate countryside ruin, partying and getting drunk.

The right side is a small oasis where nature has decided to recapture what man had previously removed from her. Trees and shrubs intertwine in a game of those who get higher. Ah, here’s a bathtub hanging on a quarter of a floor. Not to mention the water smeared on the wall of the foreground! But who would want to live here ?.. a group of jugglers?