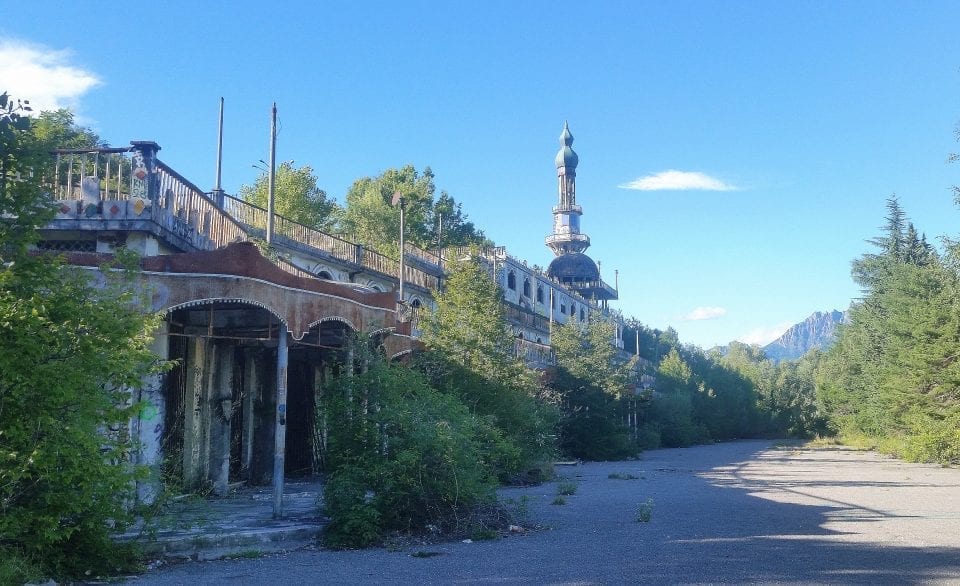 An entertainment town, a small Las Vegas in the Brianza Mountains, an eccentric count and a tragic event of the nature. These destinies are intertwined to create what is today Consonno, the ghost town.

Consonno is a hamlet of the municipality of Olginate, located at the extreme south of the Prealpi lombarde, in the province of Lecco. You can reach the abandoned town from the road which rises from Villa Vergano (the stanga on this side is about a kilometer from the village, so you can not easily access Consonno by car when the balusters are closed).

It must have been the ambitious project of an eccentric industrial brianzolo, Count Mario Bagno, who in 1962 wanted to turn this place into a great amusement park. The few inhabitants in the hamlet (around 60) thought that it was time for them to become a tourist center, so they saw the project proposal positively.

In fact, what in real happened then was the complete destruction of the hamlet. Scrambles came into action without warning the inhabitants, still with the people inside the houses. It even paved the hill in front of the village in order to have the panoramic view to the mountain. Only the church and the cemetery were saved.

His “balloon city” ideal was slowly beginning to take shape with the construction of buildings from the most varied and extravagant forms: an arabing mini-mall with a minaret, which on the last floor housed small holiday apartments, a Chinese pagoda, a medieval castle, a ballroom, multipiano fountains and a luxury hotel (the Plaza Hotel). However, Count Bagno wanted to continue building new attractions such as a soccer field, a basketball court, a tennis court, a bowling alley, a golf course, a skating rink, a moon park and a zoo. It should have been even a car circuit.

Consonno become an amusement center with a huge shopping center and restaurants that hosted famous characters of music and entertainment. Huge insignia on the road to Consonno welcomed visitors.

In 1976, however, a landslide decided the fate of what is still today Consonno, a ghost town. At present there is only one inhabitant who lives in the old canonical house, while the abandoned buildings of the town have been completely fenced after the further devastation suffered during the rave party.

One step further and we are in Consonno. The minaret is the first thing that jumps to the eye and, just because it should be the elite attraction of the city, we decide to leave it as last thing to check.

Our exploration starts from the various houses and premises located to the right of the main road. The rooms are all empty except for some of the beds left in the dust and not artistic graffiti. Outside this building we see a “hippie” pickup truck guarding two other rooms used as storage. 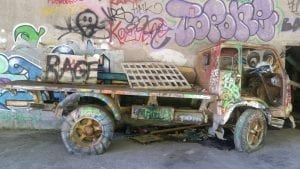 Continuing towards the center of the city we bump into the Chinese pagodas and the dance floor. In the center the town there is a church and another building to the side with doors and windows barred. Behind it probably the only inhabitant lives with his garden and hens. 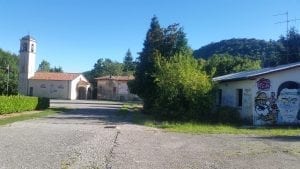 Walking backwords we come back where we first saw the minaret and the dome. Here the image that is repeated more than once of Consonno, we can finally see it in real life as well. We have a look at the ground floor and the first floor to try to figure out if there’s something else to visit. 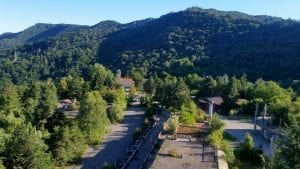 Graffiti, graffiti and nothing more than graffiti. 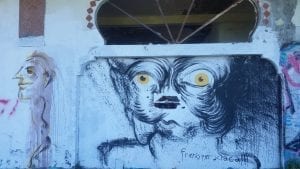 So here we are climbing and climbing up the stairs leading up to the minaret where the bell is hidden. The way to get there is by no means certain though but then, when you get up, the sight is really taking your breath away. Mountains all around you, wind that caresses your skin, a city abandoned under your eyes, and the joy of having finally reached the goal you set in the past.