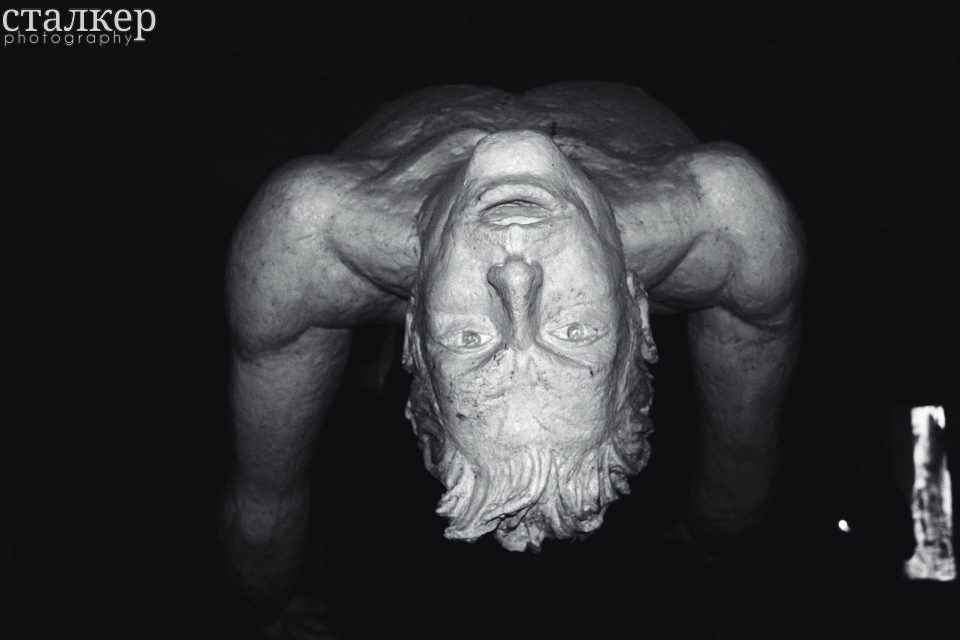 What is your talent? – I build big castles in the air. – And then? – I plug the ears for not hearing the noise they make collapsing.

Invisible at first glance and yet so impressive, it is named by the small village where it is built, in the heart of the Emilian countryside between Ferrara, Bologna and Modena. Covered by vegetation, it is located along the road and is easily accessible from the gate or from the surrounding enclosures. Urbex must pay attention because the castle is guarded by the inhabitants of the area and by a guardian, in order to prevent any vandalism. 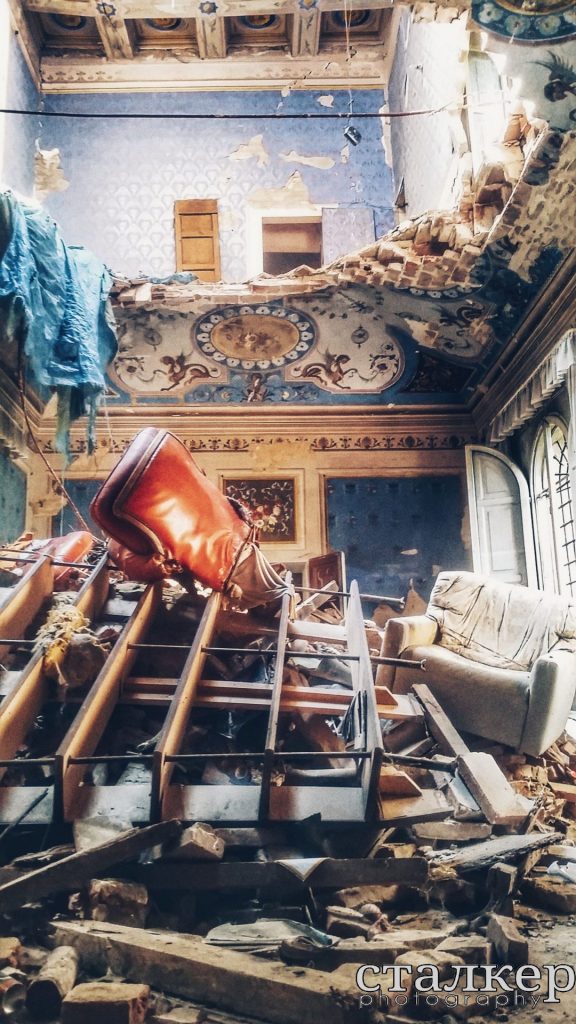 The castle was built in different times. The oldest part is the main tower, built in the 14th century and named “tower Anna” in honor of the wife of the leader Galeazzo Pepoli who built it. In 1870 it was bought by Alessandro Falzoni Gallarani, a famous noble with a good taste for art and esteemed musician of the time, who expanded the project building to what will become the true castle in neo-gothic style, complete with garden. The main purpose was to use it as the residence of the family: among the 100 rooms there are numerous bedrooms (for nobility and servitude), kitchens, basements, stays and kitchens… a true abandoned dream.

“Fast as Vandalo” was a way of the time to indicate the fastest horse ever. Vandalo was in fact an Italian horse who won over 300 races abroad, and had the stable here. After countless victories and being attributed the fictitious title of “horse of the Risorgimento“, his first master, King Victor Emmanuel II, decided to use it as a horse drawn carriage. It is said that once he accompanied the master to see a race on the racecourse and that, at the sound of the bell, he started  to wriggle and forced 4 people to keep him down. 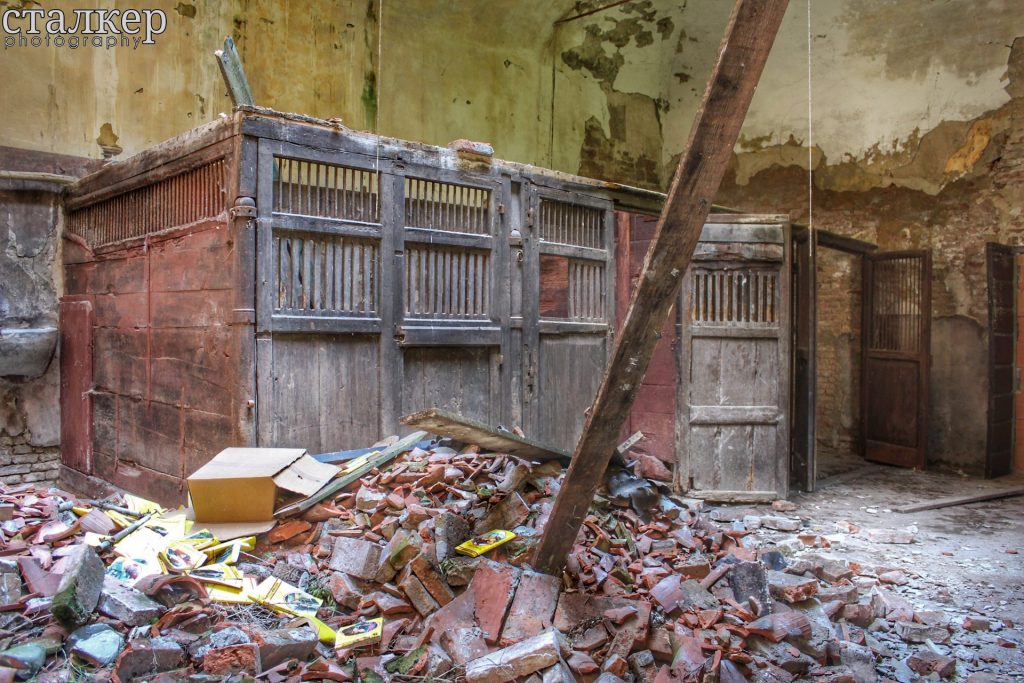 In the spring of 2002, the wealthy American Clarck Anthony Lawrence bought the castle and moved there the headquarters of the cultural association “Reading Retreats in Rural Italy“. The purpose of the association was to promote tourism and share the art of the castle (which ranged from countless frescoes to a collection of more than 3000 books) by organizing events such as reading stays, exhibitions, concerts, balloon flights, walks in the rich park full of various types of plants etc. This was successful by attracting tourists from all over the world.

In 2013 a terrible earthquake, however, destroyed the Castle , and the association could not remedy this catastrophe. The subsequent shakes of the following years did not help the situation, and the association together with the castle owner was forced to abandon it as it was, saving as much as possible. However, it has not lost its fame, remaining a destination for the hardest explorers. Much of the work is still trapped between the bricks where you can admire neglected beauty hovering among the debris. 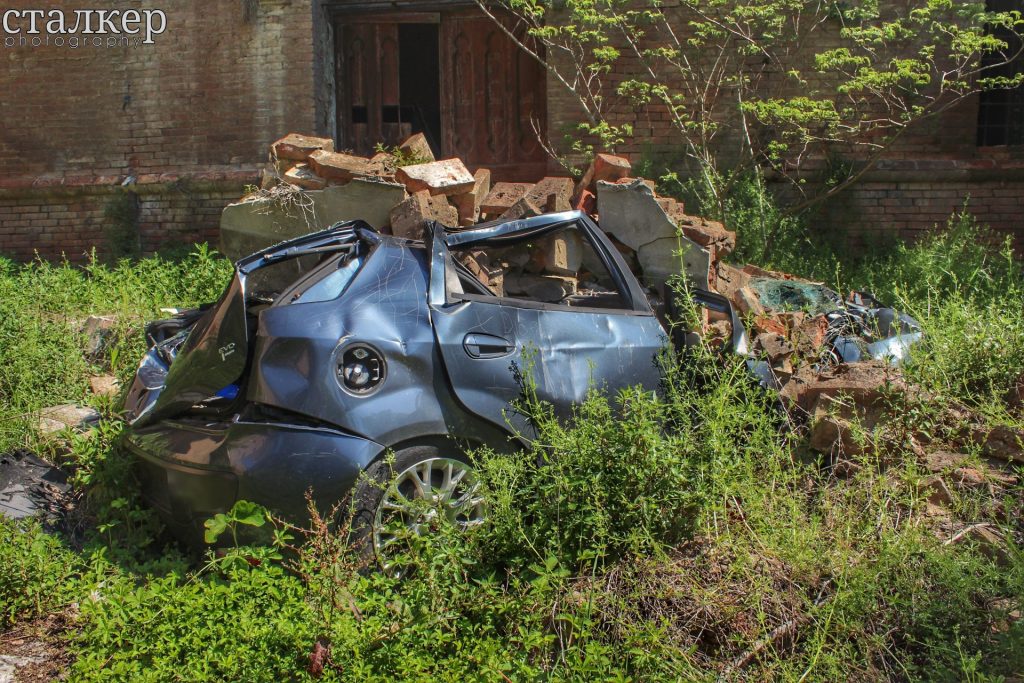 The castle of the giant

The upper part of the castle is largely collapsed, as the tower Anna which that did not withstand the earthquake. The lower structure (ground floor) has signs of disaster but is still standing. 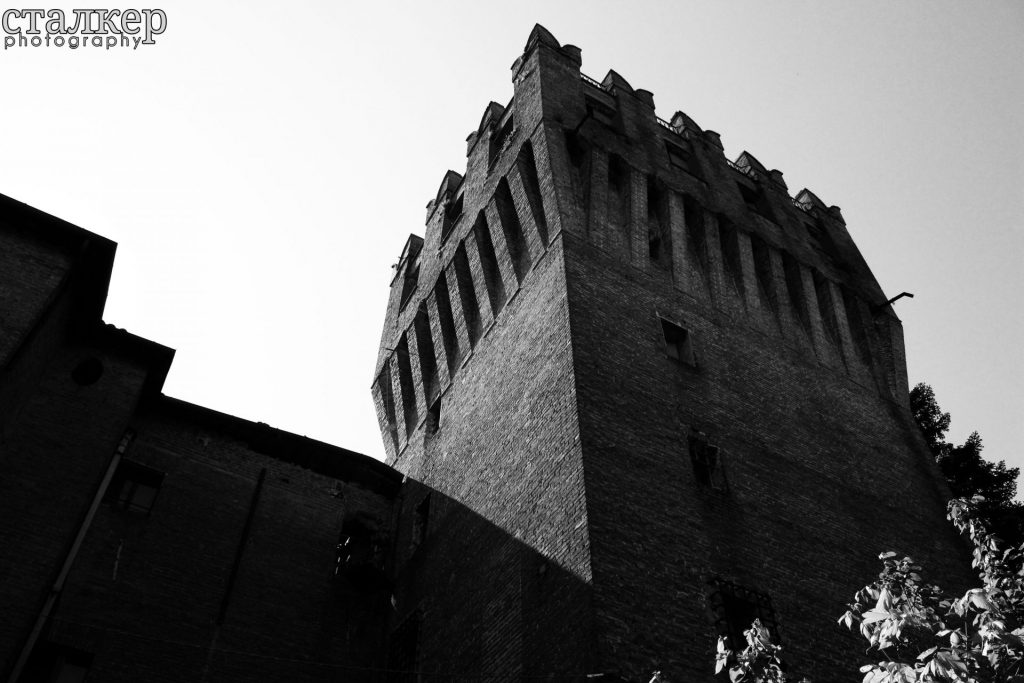 The left wing of the castle is a park of wonders where objects of everyday life and not only are still enclosed and trapped inside. Canned food, glass jars with spices, candlesticks, candles, dried flowers, books in all languages (a real room full of books), a television, a washing machine and many more. Through a collapsed wall, under the tiling of the tiles and the creaking of the beams, you come to a rather disturbing room at first glance. A warehouse – probably used to store clothes, objects, masks, halloween disguises and various objects – shows at its center a paperback mannequin hung with a long chain to the ceiling. The dummy moves slowly, turning constantly on itself, controlling every corner of the room as if he is the guardian and could determine who can and who cannot get in. 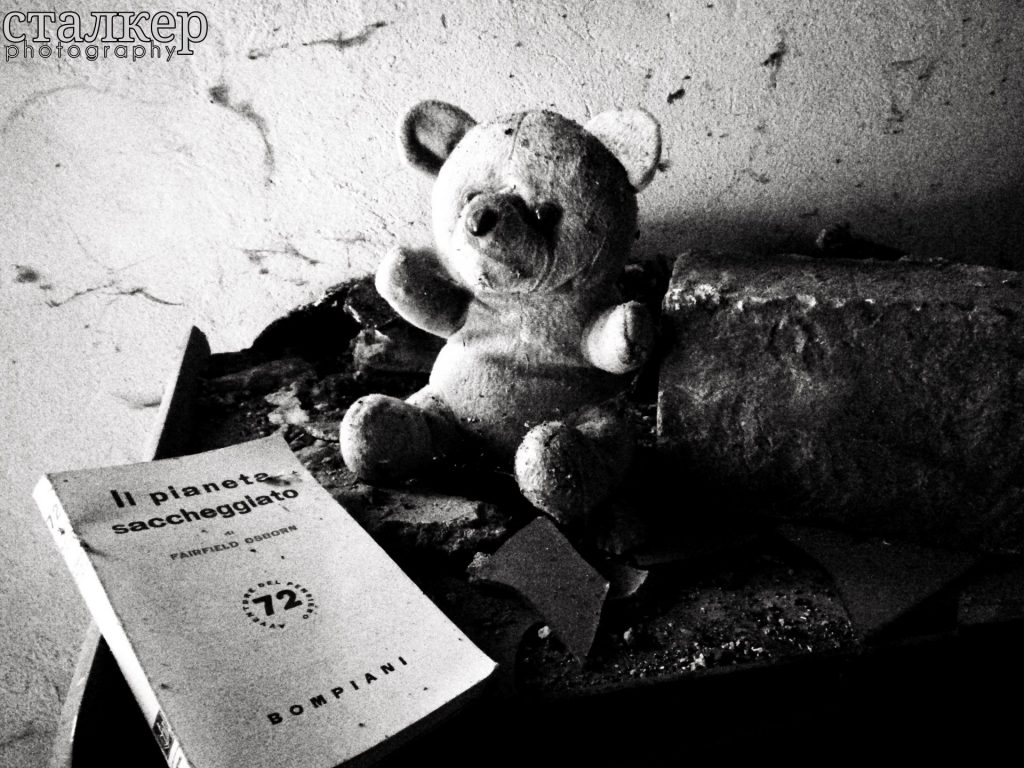 The first floor is easily accessible with a wall staircase.  All around blue painted walls, colored red doors, plush everywhere and over the bedside table a book “The plundered country.” It seems to be in another world, catapulted into the fairytale country! On the right corner there is a double bed and next to it a sofa, hanging on one side with strings. The rest of the floor lying in ruins. 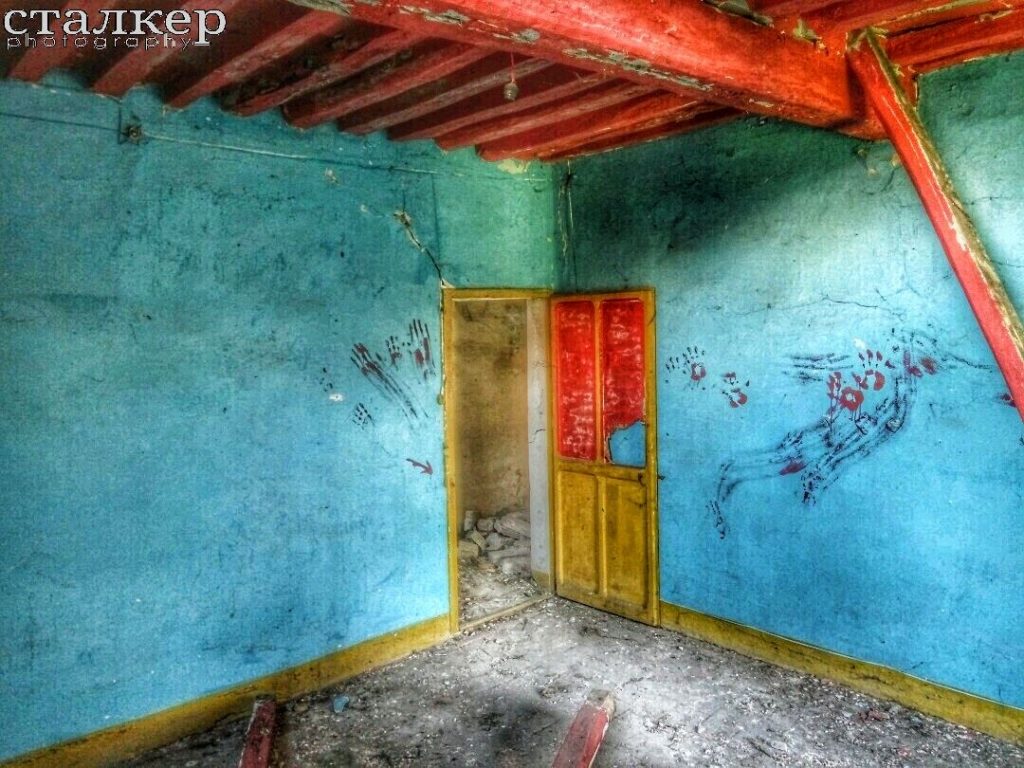 From the central garden, you can enjoy the 360 degree view of the entire castle. Majestic as helpless against the force of the nature. From the 14th-century tower, starting from a door up, a pulley drop down. Two swings, hidden by some tree branches, fall in wait for someone to return to use them again. Under the shadow of an imposing magnolia, there is a wooden table, with some nice chairs made from tree trunks. Finally a break from the sunny midday sun! A car – once owned by a guest of the castle and friend of the owner – is now crushed under tens of pounds of bricks. The destroyed car lies right in front of the stall of the famous “Vandalo” racing horse (see above for history). A tour around the perimeter and it turns out that almost all the entrances are walled except for a hole in the wall, near the secondary gate. One at a time and here’s all that’s gone.

Some empty rooms, a toilet and a wine cellar with bottles of wine (not full). This is what is possible to see on your way to the last floor, from where then you can take the road for the “true” and ancient part of the castle. You have to pay close attention to the holes on the floor, where at times it miss a place where to rest your feet. Walking on a wooden beam, passing over the barn of our friend Vandalo, we reach the entrance of another world. At first sight it is believed to be in something surreal and the person is immediately welcomed by a feeling of incredulous shock.

Everything is as if it had been crystallized over the time: a table with books above and armchairs around, a wardrobe and a mirror cabinet, a fireplace and flowers in a jar. Above us a painted vault. All this is not limited to that room, continuing to walk you can admire other beautiful painted ceilings, dust-lined objects (such as turntable or full baulk) and ornaments. The part in my opinion that most can impress is in the central body. A marble stairway gently descending … an old map cover almost entirely the wall … over the ceiling is dotted with coats of arms, each one different from the others. On one hand the kitchen, on the other a completely collapsed floor (who knows what else can be buried under those rubble). Passing through the only possible passage that leads to the tower you can see a library and a beautiful colored chair.

Another curiously charming room: two chairs next to two lamps and a coffee table with a set for the thè. The whole thing in front of the fireplace. It was easy to understand the passage of many other urbex who, attracted by this treasure, have “decorated” and willingly arranged the objects. The dining room and the kitchen are all still intact, with  various dishes and cut over the table. On the furniture are arranged some bottles of wine. In the kitchen there is the scoop, pots and a pair of coca cola still packed.

On the way to the tower, you come across the bedrooms and even in a chapel with bible, crucifix and some framed photographs of Jesus Christ and other saints. On the last floors, the corridors are virtually all collapsed, so reaching the tower becomes an even harder challenge. The spiral staircase is very long, almost endless. Finally, on the top floor, you can enjoy unprecedented views. Fields all around, a breeze that caresses your face and the sun that slightly hits you on the back. 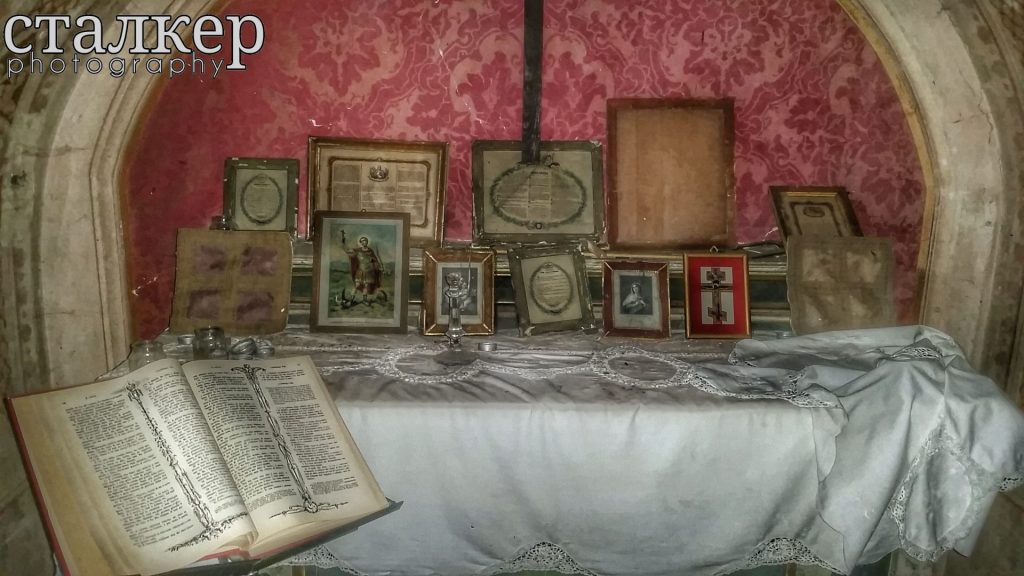 This castle represents a life scenario, something of alive and unforgettable. Not forgotten by those who remember and who relive these moments -of normal life routine and not-. Urbex, this is part of our work. Return to the present what has been left in the past. 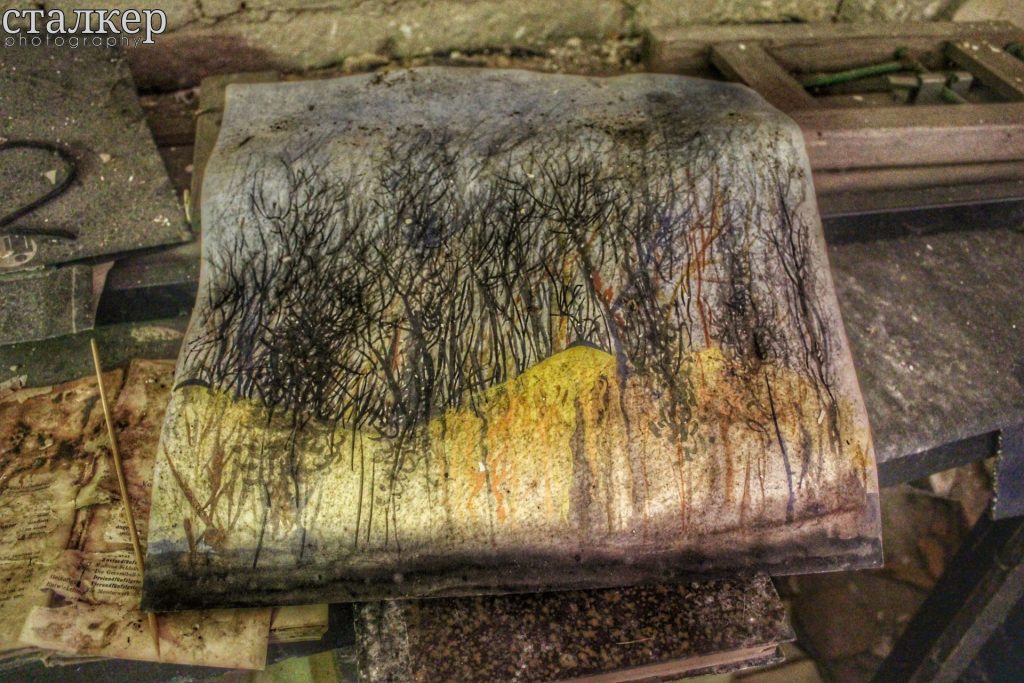 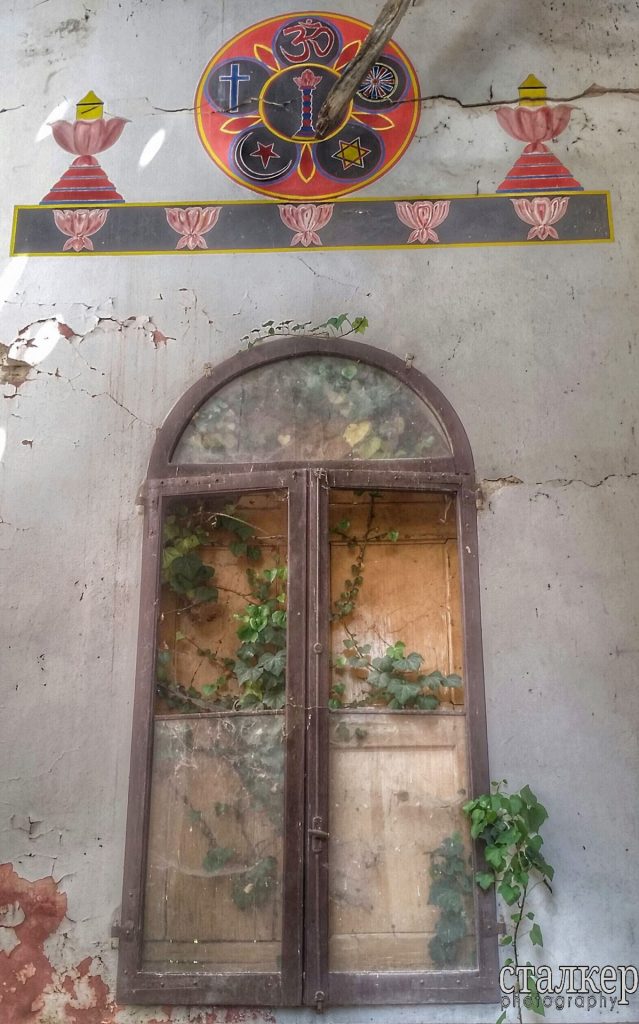