When I was coming for my first time in Finland the first question was (as always), is there something of abandoned? Everyone was laughing! In Finland? In the country where land costs so much?! No way! But of course Stalker has found some and is ready to share it with you!

Someone told me that there is peninsula, called Kruunuvuori (Crown Mountain) where I can find many abandoned villas. Google showed me that it is just 10 km from me. As long as transport is expensive in Helsinki, I decided to take bike (that Google promised that it will take just 30 min.)

Kek, in the end I was cycling for 3 hours, but it was totally worth it. The nature around was absolutely amazing! And here I am, in the Kruunuvuori, in the forest, searching for something abandoned. 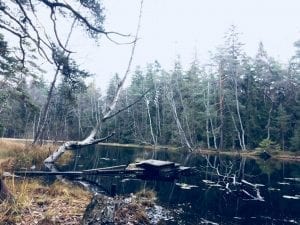 As I read before Kruunuvuori appeared in the late 19th century, before here were just fields and forests. In 1900 German businessman Albert Goldbeck-Löwen turned this place into a resort for the upper classes and the wealthy Germans who lived in Helsinki. Later this place became also available for the middle class.

After WWII members of Communist Party of Finland had fun here. In 1955 this place was turned into a residential area for thousands of people.

There were still some houses belonging to communists. While the uncertainty was growing, the number of neglected houses was also increasing… 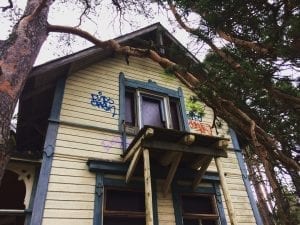 Now I am staying here, in the forest, all alone. I am trying to find at least one abandoned villa, but it seems impossible… around I see just trees and a beautiful lake…

Luckily, I find one house, and another one fully abandoned and burnt. They stay all alone, on the other side of the bay from beautiful modern houses. 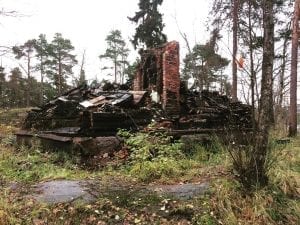 This is the monument to the glorious past. It will also disappear soon.

As I open out later the villa I have found is called Villa Hallebo.

It is unknown who built the villa. Rumors say that Governor General Nikolai Bobrikov built this villa for summer vacation. So the villa should be built before 1904, when the general died. Others say that Hallebo was built-in 1920.

Villa was the last residence on the Crown Mountain, where people lived. One person was staying there from 1992 till 2012. This person was really lucky. The view on the bay that is opening from the windows was and still is stunning. There was beach in the near, no people, birds singing in the morning.

In 2003 this villa acted as a venue in several films and TV shows.

But from that times many things have changed. Now Villa Hallebo is fully trashed, floor is rawed, and it is quite dangerous to come inside.

So the only thing was worth – nature, that is not changing with times, and gets just more and more adorable.