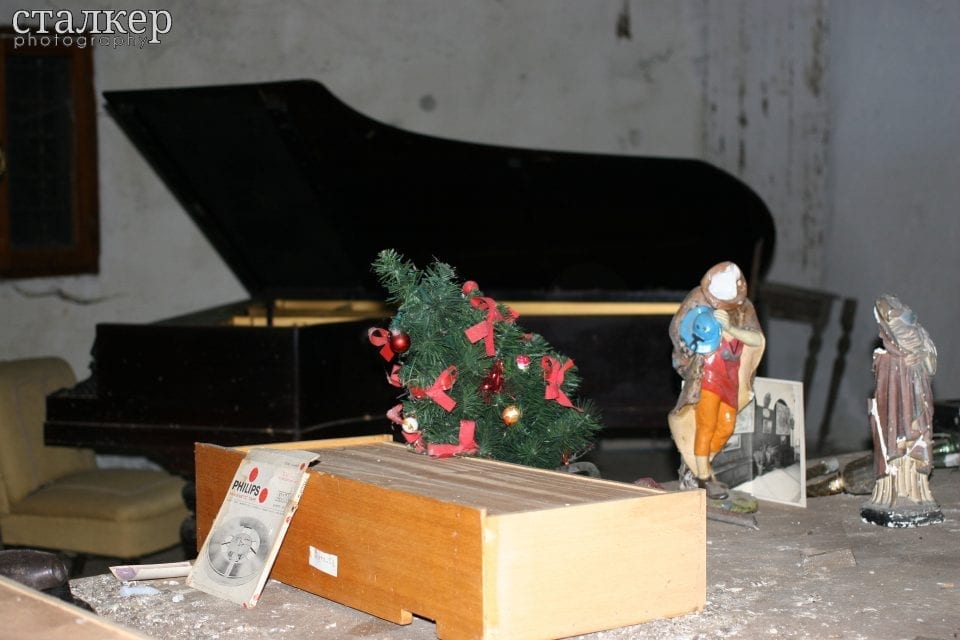 In a small village of 600 inhabitants, on a hill surrounded by cypress trees, stands the home of Foscolo, in memory of the probable stay of the poet and writer Ugo Foscolo.

The villa was born on a hill in the countryside of the province of Padua. Getting there is not difficult at all. It is possible to leave the car in a nearby street and walk the 500 meters that separate the paved road from the entrance of the villa. The entire courtyard is surrounded by a high stone wall, so you will need to climb over an iron net (already bent by someone else) and climb another 100 meters up the hill. 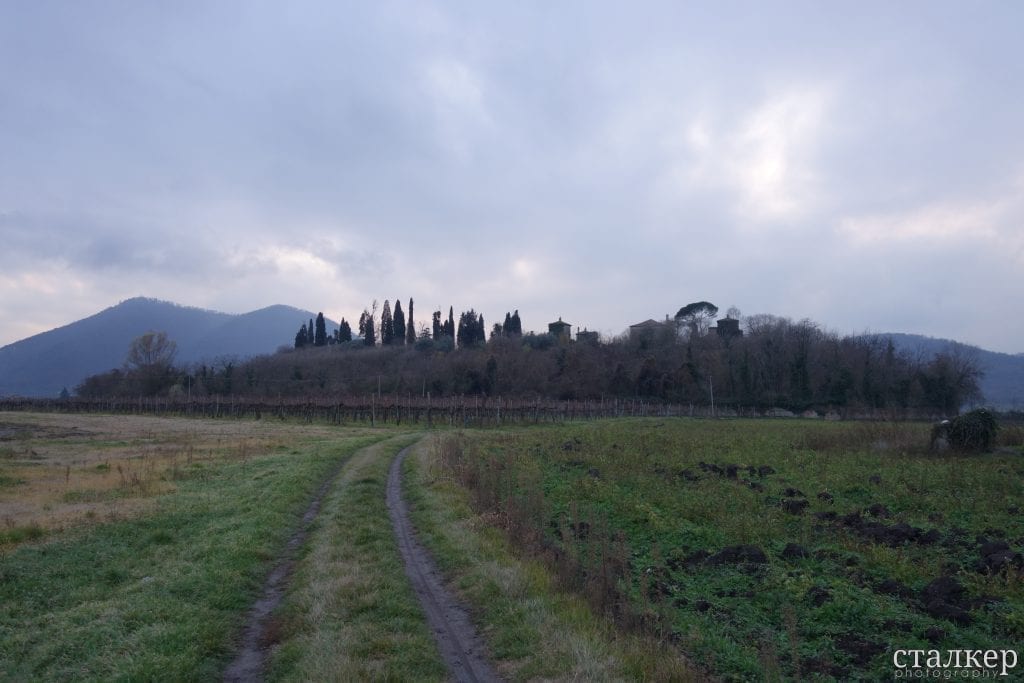 The complex was built on a hill where, in the twelfth century, a fortified building was located. The current villa was built in the 16th century on behalf of a Venetian patrician, and later it is enlarged with the addition of four tower buildings on the corners of the property, annexing the colombara and the oratory. It is said that in the nineteenth century Ugo Foscolo, Italian poet, writer and translator and one of the leading writers of neoclassicism and pre-Romanticism, stayed in the aforementioned villa and wrote the novel “Ultime lettere a Jacopo Ortis”.

Custodian of an imaginary stay of Foscolo, the villa is enclosed in itself, elaborating memories and shots of what has been lost over the time. Despite the historical character of the Euganean hills is Francesco Petrarca, in this area took the “upper hand” Foscolo.

We arrive at the gate of the villa with the torches already lit and the darkness behind us. The gate is obviously closed, so we decide to step over the iron net one at a time, giving us a little push by placing the foot on the wall. We slowly climb the slope that separates us from the property, through trees and bushes. 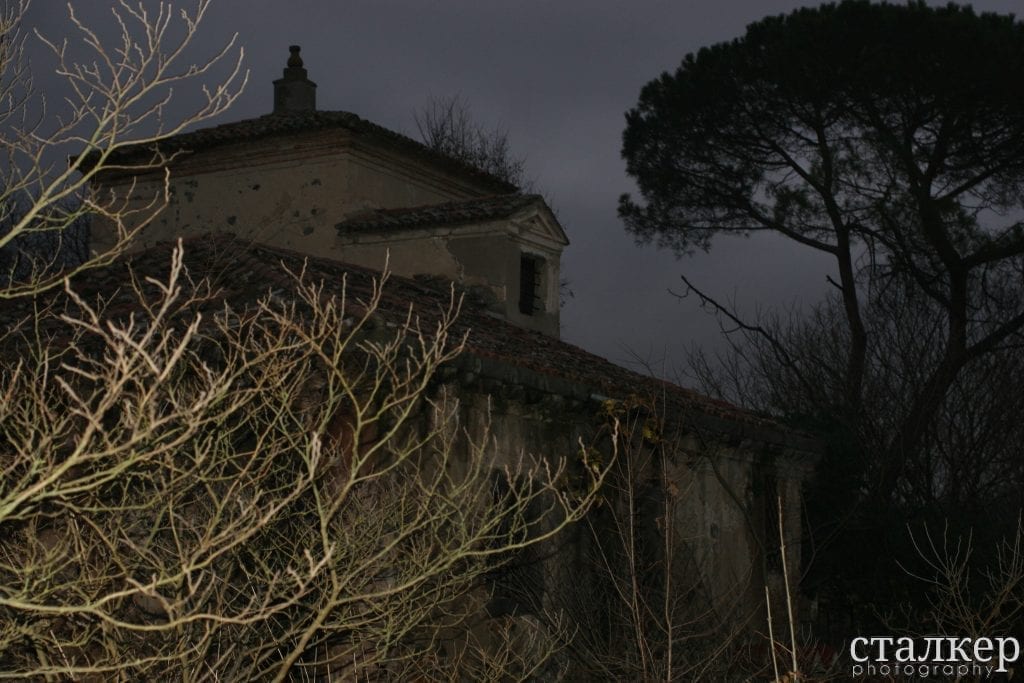 The first to appear before us is a small stone building, probably used as a warehouse, which we skip without even think. We go even further, crossing the threshold of a wooden door and finding ourselves in an old cellar. There are bottles, trophies and huge green demigods sleeping on the ground. Every now and then we wake up some, slamming against with our legs, because the room is completely dark and we can not pay particular attention to where we put our feet. We light the torches that reflect the light on the damp walls, illuminating old bottles of wine placed on a wooden shelf. There are two narrow passages that end with a wrought iron door, from which you can then reach the villa. Let’s go back and see that there are other stairs that lead even further down. We arrive in a simple empty room, nothing interesting. The room next to where we found the demijohns is a real treasure chamber. Three carriages, placed one next to the other, dominate the scene. By now, no longer able to return to run on the road, they rest here, without life and without purpose. One of them even has the seats lined in imitation brindle leather. The rest of the room is used as a warehouse, houses chairs and tables, some work tools and an unusual turntable. In a shelf of a closet we find dishes, glasses, pots, matches and buttons. 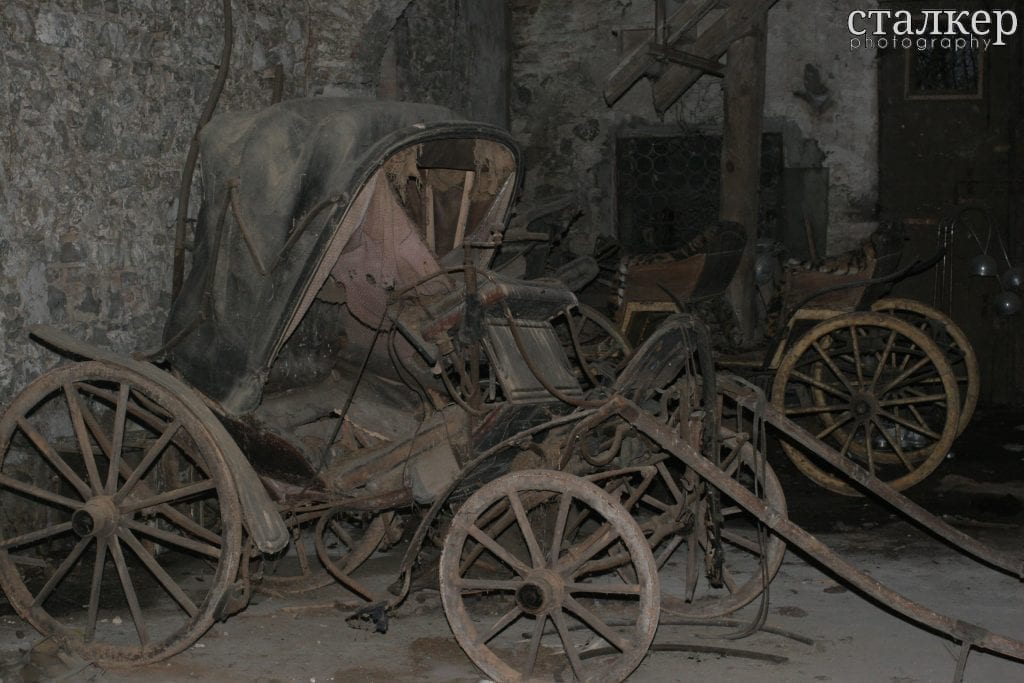 We go back along the tunnel and climbing the stairs to then emerge into the garden. There are three buildings to visit, including the villa. We decide to leave it last and visit the building on our left. A magnificent piano, still capable of letting itself be played, lies helpless in a corner of the room. The floor is covered with antique photos and statues. Hundreds are scattered all over the floor along with excerpts of newspaper and some books. On a wooden table there is a small Christmas tree, two statues that recall those of the crib and a chest of other times.

In the next room we find clothes and clothing of all kinds, including hats and colored jackets. In the near room, on the other hand, we are witnesses to a real store of lamps, chandeliers and broken ornaments. All these small glass objects are placed on some wooden shelves on the sides of the walls. 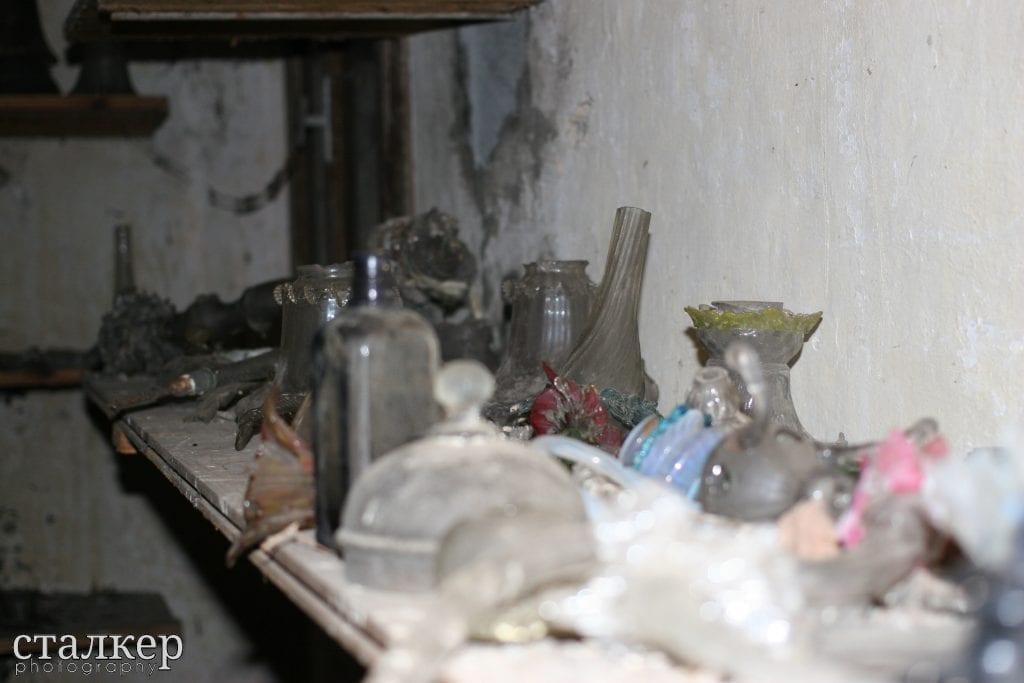 We reverse to explore the other building that we left behind, where statues from the bust or neck up were completely destroyed. Unfortunately, after this villa ended up in the newspapers of the whole area after the discovery of a young couple who had run away from home taking refuge here, many guys managed to reach this place and then vandalize it. The room contains not only statues, but also books, documents written in different languages including Arabic, other pots, antique furniture, tunics and clothes talari, frames and photos of the Madonna and Jesus and even three pairs of skis. In the next room there are remnants of boxes for dogs and a kitchen baste with stoves and tables. Leaving the structure we come across two dog beds, adjacent to the entrance stairs. 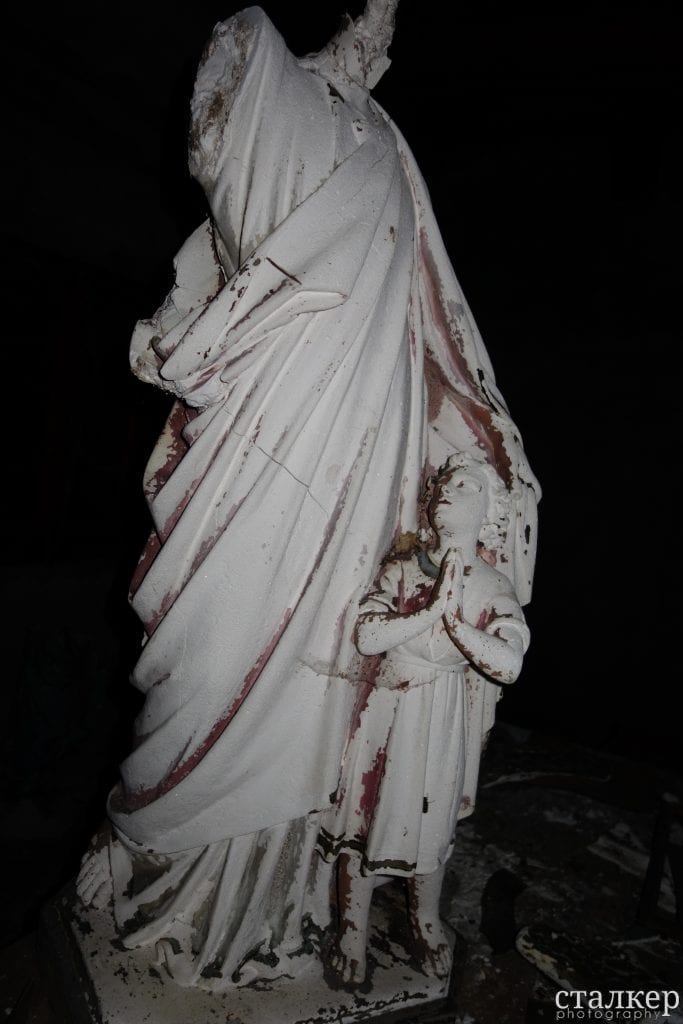 Now finally has come the turn to visit the villa. We are dazzled at the entrance to the sight of another piano with a coffee mocha on it. In the middle of the room an armchair with a statue of a severed head next to it, replaced by a beautiful bouquet of fake flowers. In the other rooms and in the second floor we witness various testimonies left by a past life of some homeless people. Shoes and slippers along the stairs, mattresses in a room on the second floor, pots, cutlery and other utensils in the kitchen, a slide and a drying rack for the iron. All in my opinion in good condition. If I were a homeless I would definitely choose to live inside this villa, as comparing it with other places we have visited, it is cleaner and in an area well protected from prying eyes. 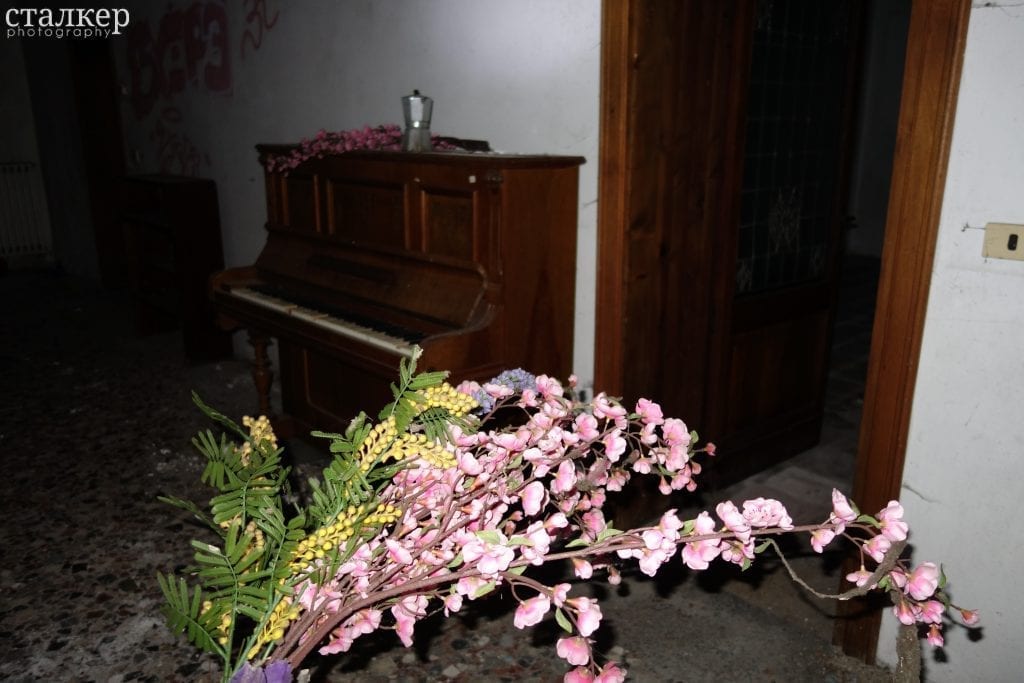 Let’s leave this splendor to venture into the oratory. The church is completely bare, deprived even of the water of the saints and probably of other ornaments which it had “decorated” long ago. The altar is the only thing that remains to his testimony. In the part above, in a kind of tower, we encounter again in some bivouacs positioned on the floor. In the basement of the church we find a beautiful trunk (unfortunately empty, who knows what kept) and the remains of animal bones. Enough creepy and mysterious I would say. Just outside the oratory we investigate and find a plaque, hidden by moss and some tree roots. A stone that was broken and subsequently rebuilt incorporating several other pieces of stone and concrete. Partly readable, in part no, we can not understand its meaning. 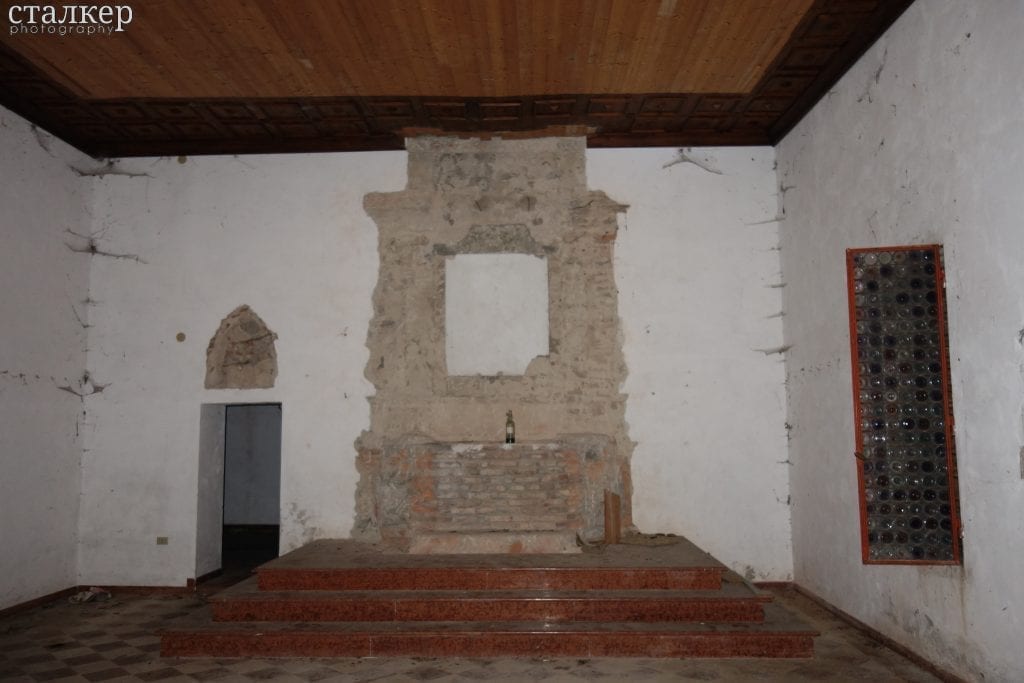 The last one is missing another beautiful building, with inside a third and last piano, decorated with Christmas decorations (at Christmas it was still a month, so it is probable that they took in advance). In the rest of the room, other decorations, colored balls and discarded gift packages. A beautiful wooden staircase leads to the second floor, where here we find a bed net, but without any mattress. Small room, with wooden floor and two small windows on the sides covered by ivy that tries to make its way through the pieces of glass still intact. Quite suggestive. 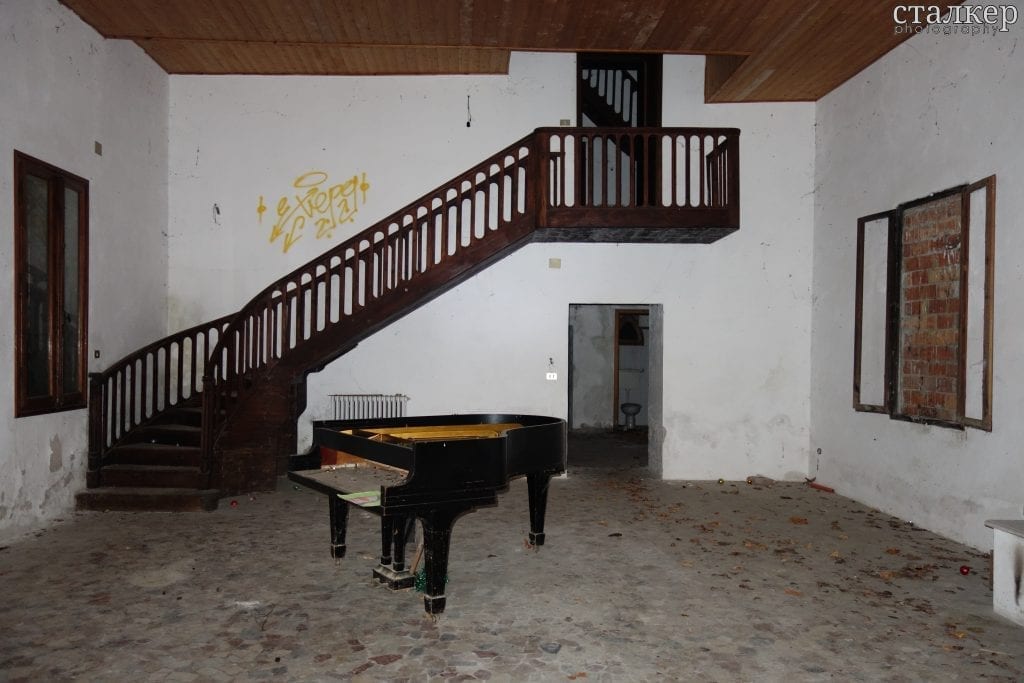 We leave the property in the same way we entered, leaving behind this magnificent historic villa and all its history.