The temple is located a few kilometers from the cave of Tham Cham in Vang Vieng, Laos.

What you need to do is essentially go against the current. With this I mean: do not follow the mass of Chinese who thickens in front of the ticket office but go in the opposite direction, and get closer to the local population.

Just behind the ticket office, near a small natural pool, you will find Laotians who take a bath. Refresh yourself for a moment and then continue. You will pass in front of a small cave and then through a narrow and wild path. 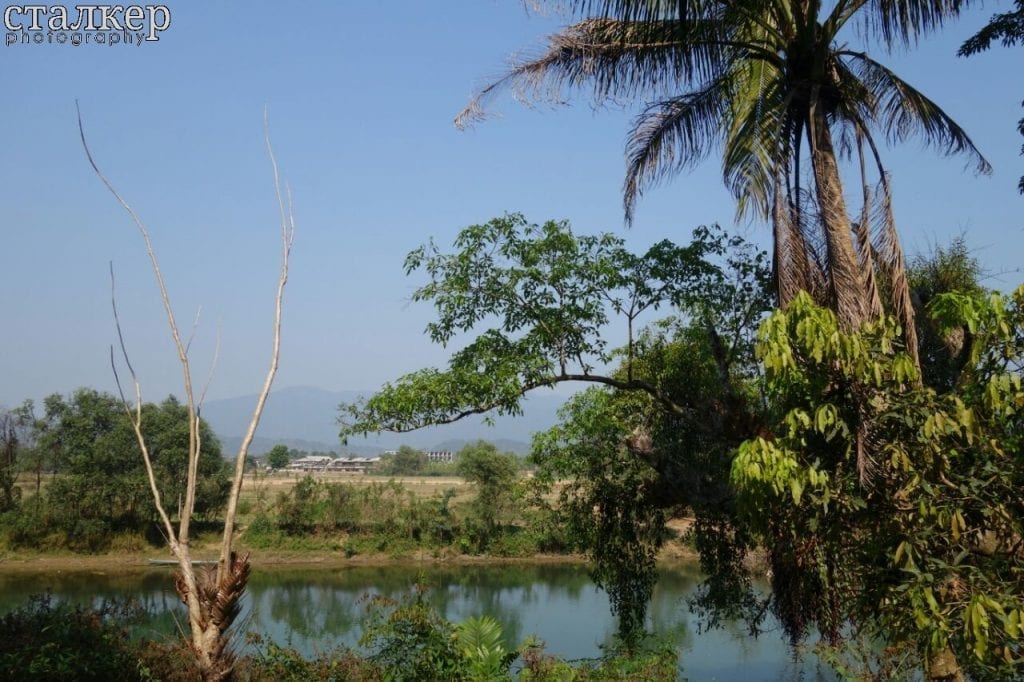 At the end of the path (only 100 meters) you will be in front of a fence. Go over it and here you will find yourself catapulted into this new dimension. 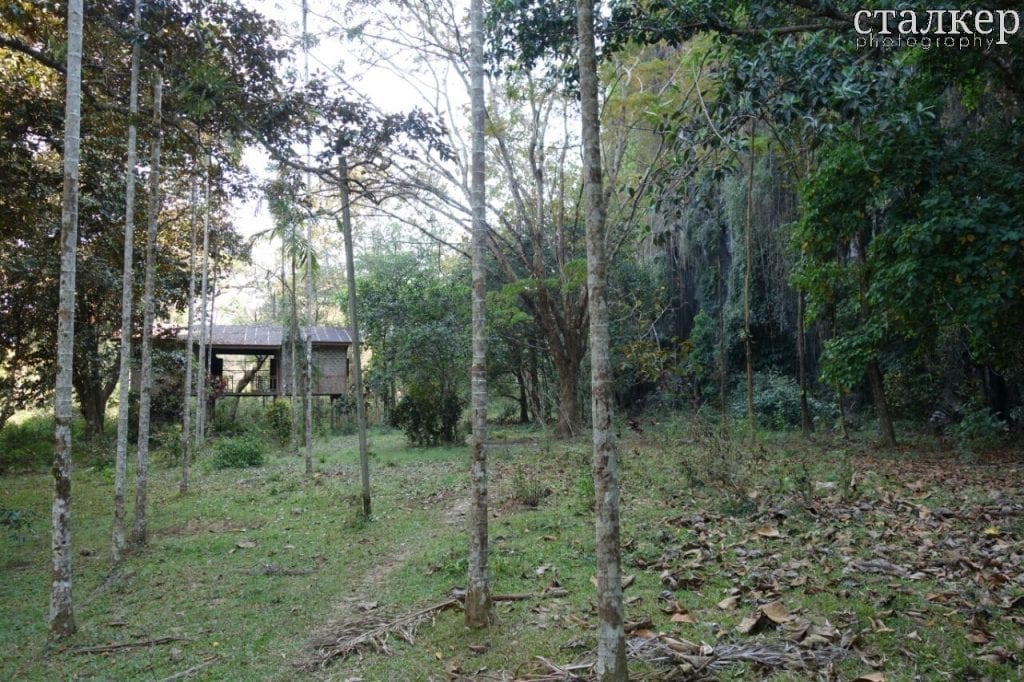 The rustle of the leaves, the whistling of the wind, the buzzing of insects and the voices of some Laotians echo in the distance, bouncing off the rock, coming to my ears almost with a dull and flat hiss.

My legs are immediately assaulted by herds of blood-thirsty mosquitoes. They understand that a white tourist is a rather easy prey, especially if not equipped with mosquito spray.

I fastly try to escape from their grasp, climbing in speed over an abandoned hut. Launch my camera, my wallet and my passport on the raised floor 2 meters above the ground. I put my hands on the damp and dusty wood and giving me a little push with the abs I find myself on top. 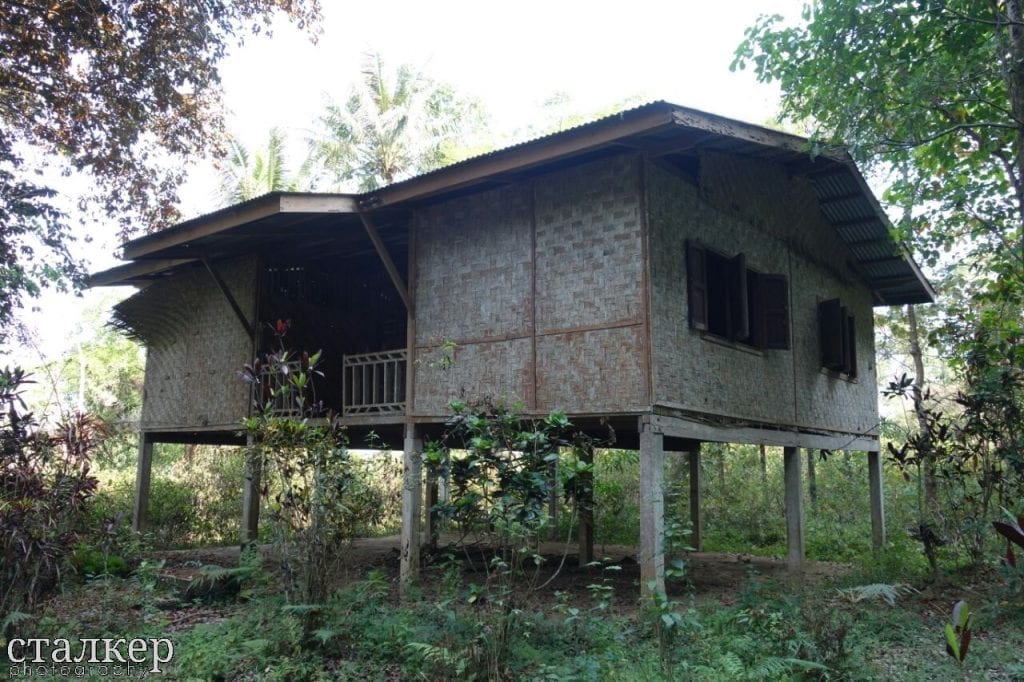 The wood creaks with every step, giving me the unpleasant feeling of always being on the verge of finding myself with one foot in the air. 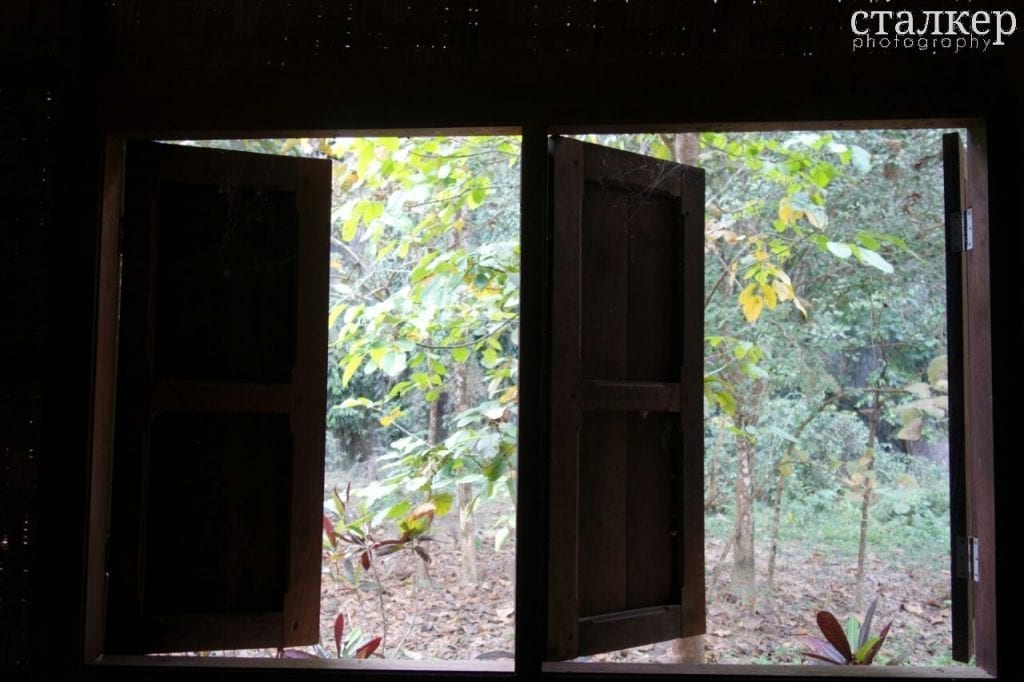 Throughout the rooms, the light struggles to enter, leaving a glimpse of the faint light of day.

The wooden windows are open and it is at that moment that I look out and see a kind of umbrella and small statues in the rock. I decide to rush down immediately. 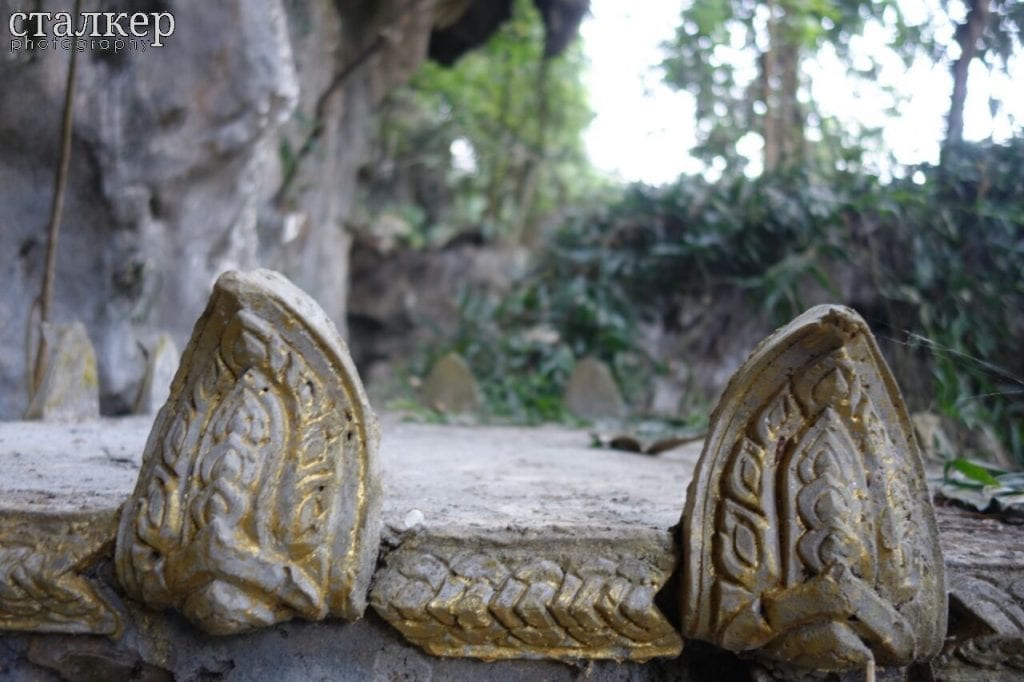 With a jump I land in the grassy lawn and with another 5 leaps I reach the entrance of this kind of cave. 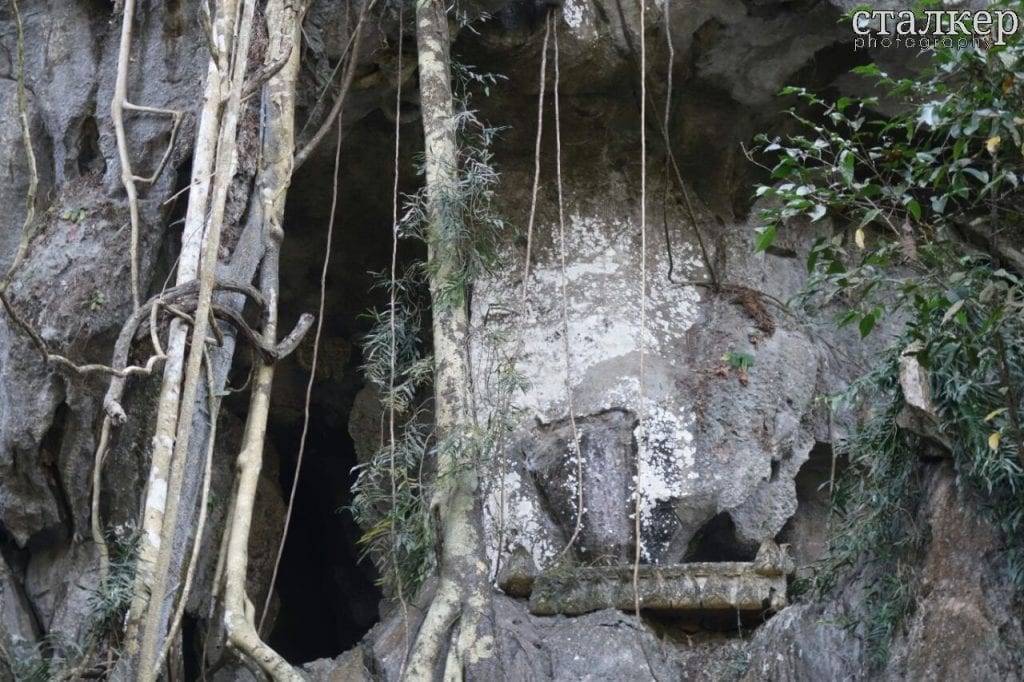 Just in front of the entrance there is an open umbrella, almost as if it was embedded in the rock. But what surprises me most – these four buddha statues, with a few concave plates beside them, usually used to collect offers or rice. 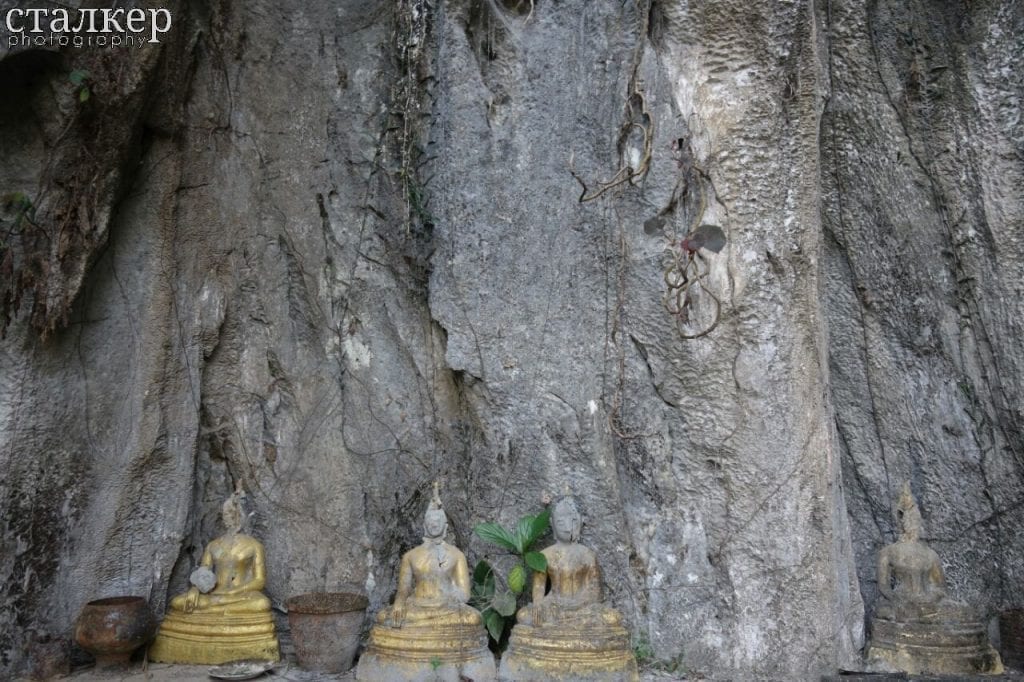 In another metal container there are some remains of incense. The faces of the statues are worn and smoothed by wind and weather, they reveal cracks throughout the central body. 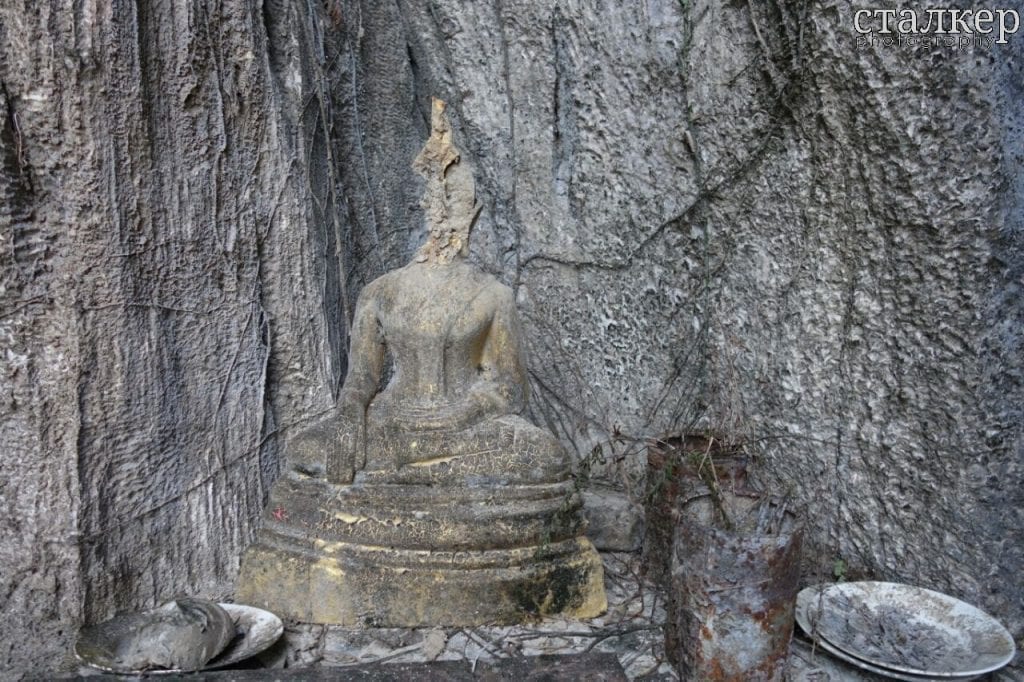 Despite all this, they resist and resist just as Gautama Siddhartha did when he sat before the sacred Bodhi tree of wisdom.

I stop for a moment, and even my mind stops thinking. I look from the outside and see a boy still unprepared, full of energy and unable to control it. In fact, soon after the thoughts return, my mind begins to work, the mosquito bites are felt.

“You do not have enough experience”, I whisper to myself.

On my right I see another umbrella, this time almost as if it was stuck in the rock. These types of umbrellas in Southeast Asia are not used for rain, but to protect people from the sun (they are large enough to cover two monks).

I move and start walking along the wall, attacked and covered by all kinds of climbers. Liane and branches intertwine almost jokingly invite me to take part in their game. 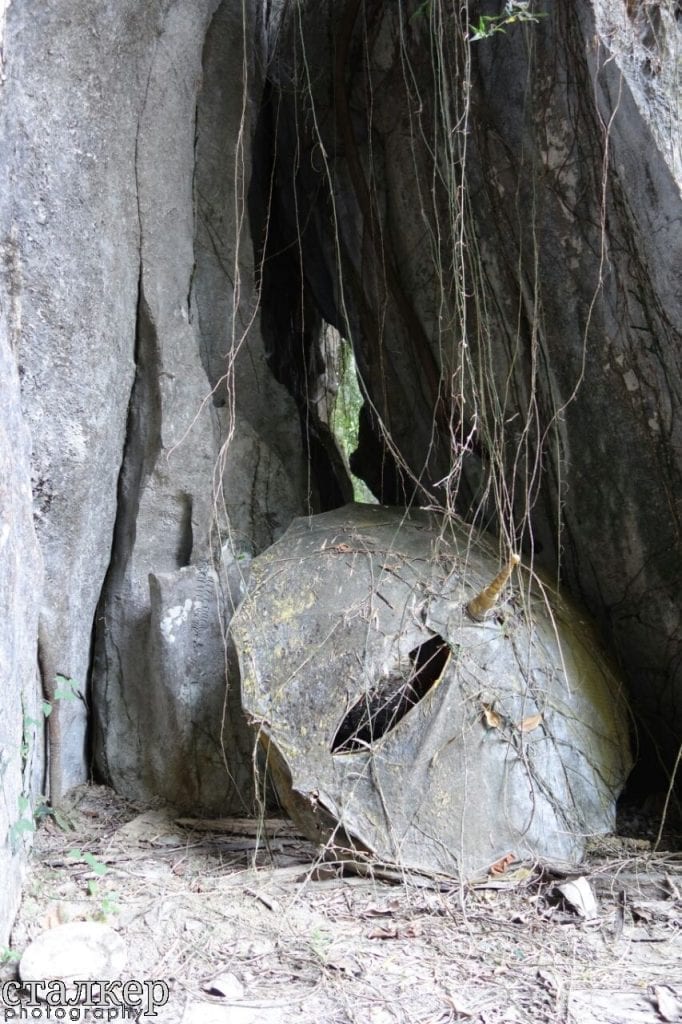 I accept the invitation and without thinking twice I throw myself into the adventure. 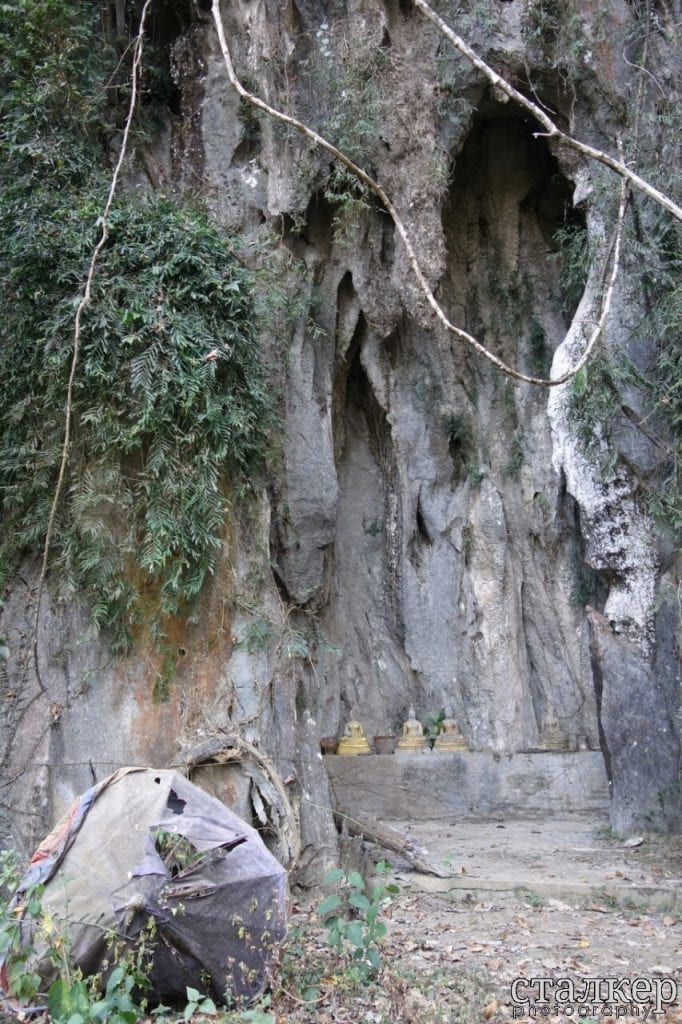 Here I am climbing between one wall and another, moving from liana to liana. I can reach some caves that end immediately after a few meters, others instead are too narrow and deep to be visited. 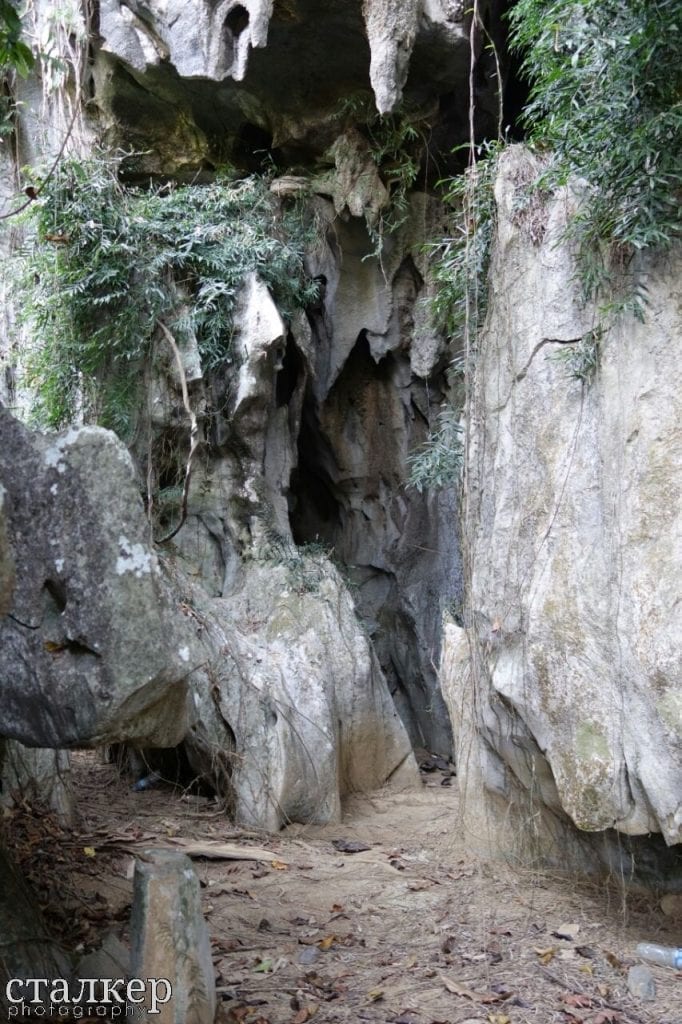 While climbing I see a wild monkey that almost drags a stone into my head.

Not far from where I entered, still in the rocky wall, I can see a kind of altar in the rock. Two meters from me another animal typical of these areas that crawls among the rocks. 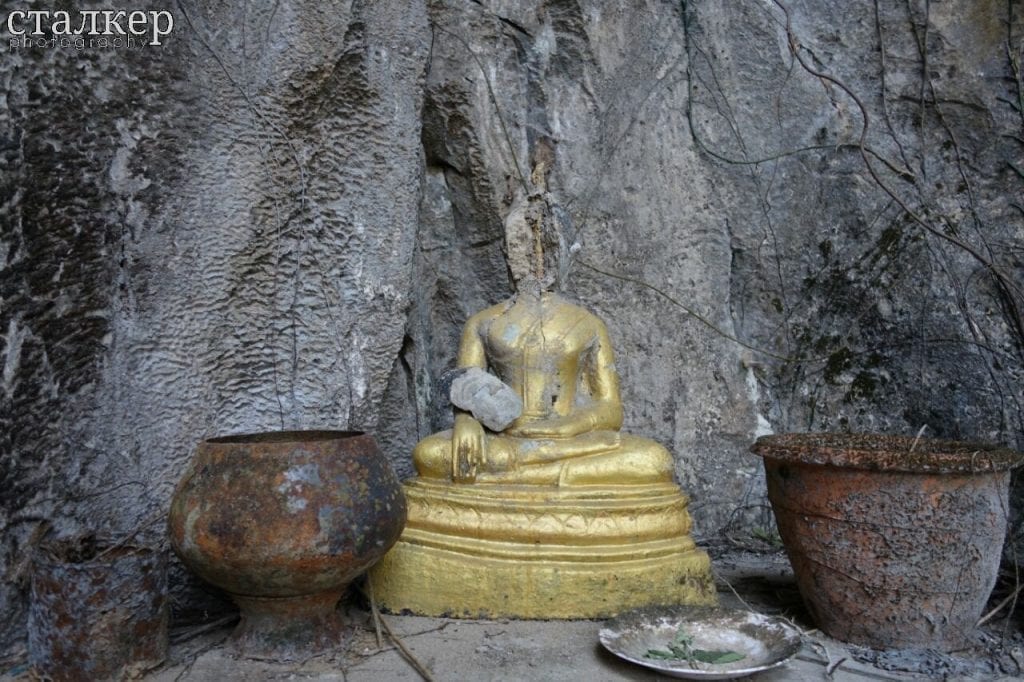 I decide to leave this magical place at sunset, when the bright orange fireball touches the highest point of the wall with its extremities.