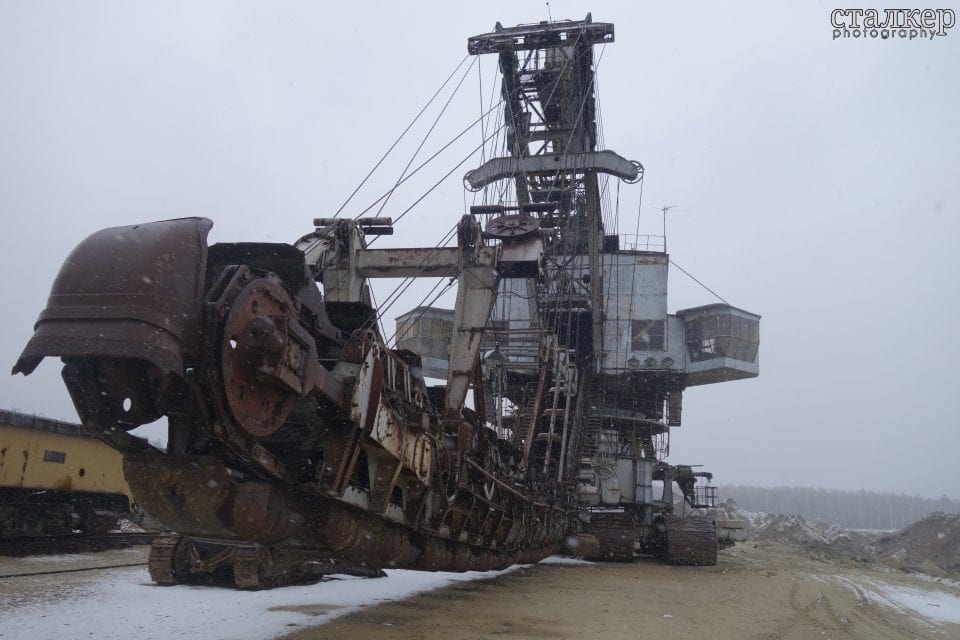 While in Italy the flowers have already appeared for quite a while, a group of young stalkers ventures into the middle of a snowstorm, in the depths of the Russian forest in search of the abandoned phosphorus mine.

The Lopatinsky mine is located 90 km south-east of Moscow. It occupies a large diamond-shaped area with its corners respectively in the villages of Lopatinsky and Phosphoritic and in the villages of Maksimovskaya and Bernyakovo, between the cities of Voskresensk and Yegoryevsk.
The phosphorus mine is 10 km (2 hrs, 15 min) from the Moskvoretskaya train station. To reach it you will have to pass through dirt and muddy roads, swamps and, following what were once the tracks that led the goods to the nearby town, you will arrive in front of the Abzettser Takraf.
The easiest way to reach this place is to download the maps.mes application on your smartphone and it will take you directly to the destination.
At the end of the article we will share the position as usual. 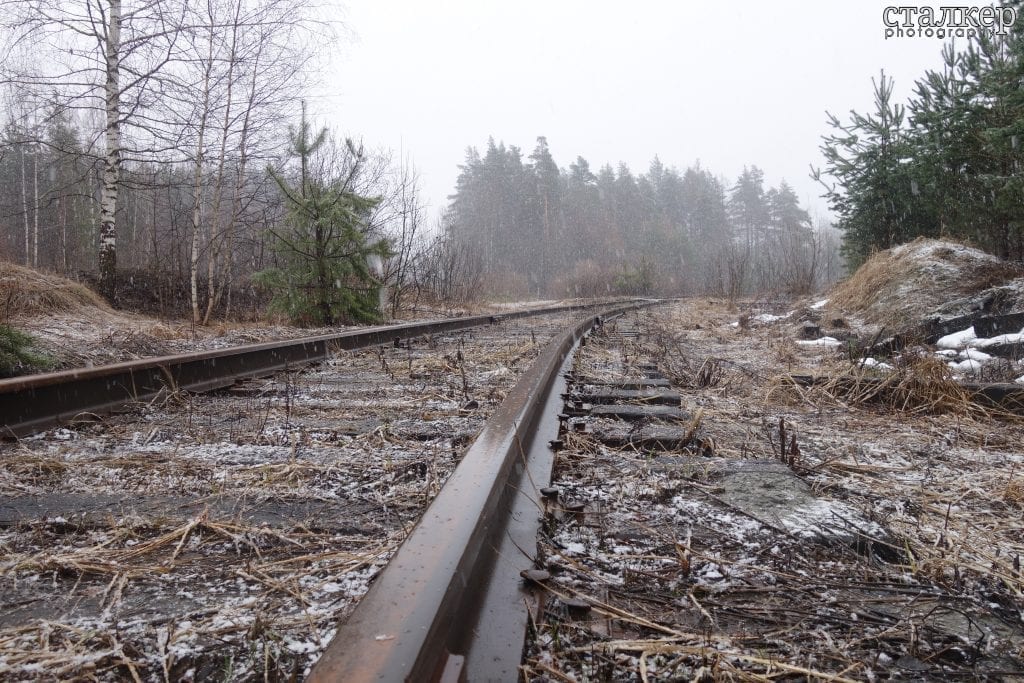 This area is the largest deposit of precious minerals and phosphorites in Europe. The first developments began in the 1930s. The peculiarity of this area was the superficial presence of relatively soft rocks, which predetermined the extraction method (open) and the type of equipment used. Based on the conditions of the Lopatinsky mine, so-called multi-bucket excavators (often collectively referred to them as “Abzettser”) have been used extensively with more productivity than any others. The most active mining activity took place in the 60s of the 20th century. 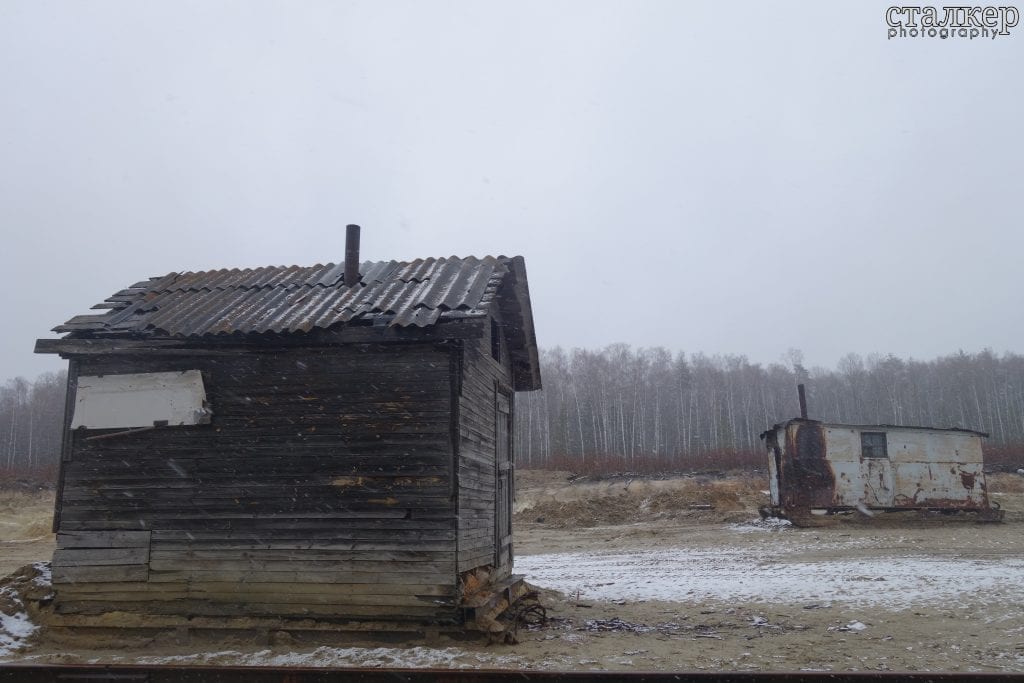 All the main types of multi-bucket excavators worked in the quarries, moving along the rails. Each mine was a long gorge that could reach up to 5 km in length, where, from one end of the pit to the other, parallel tracks were laid. The excavator moved along two of them. On the third – the freight train filled with ore. Through this procedure sand dunes were formed and they could even reach a height of 50 meters.
Since the early 1990s the mine has been almost completely abandoned. Most of the quarries are flooded, the expensive machinery imported from other countries rusts in the open air and gradually turns into scrap metal. The only functioning pit is located near the village of Phosphoritny, south of the Medvedka river, from which only quartz sand is extracted. From time to time the locomotive can be seen traversing the tracks.

Starting from September 2018, a multi-bucket excavator (absetzer) TAKRAF ERs 710 (produced by TAKRAF, Germany) is up and running at site no. 12. In addition to the latter, the NKMZ walking excavator (Novokramatorsky Machine-Building Plant, formerly USSR, now Ukraine) is also at work. 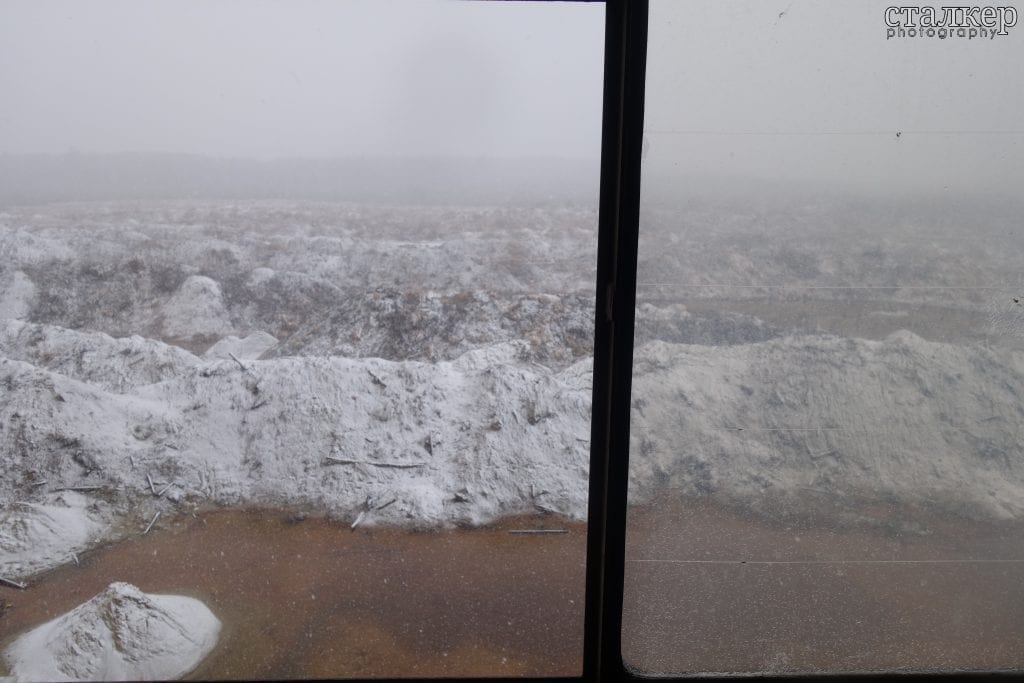 Winding roads, mud up to the knees and water right into the pants. This is what we expect and we will have to face in this adventure.

As soon as we get off the train we head quickly towards our destination, passing through some houses and reaching a dirt road. The clouds covered the sky as if it were a layer of foam. “Probably the sky is getting ready to throw something terrible at us” I think to myself.
The forest is hosting us on the road without ever getting in the way. A good escape from the chaotic Moscow and finally you can breathe pure air (or almost). Guided by our guide Svyat and his infallible and inevitable maps.me, we go all the way without ever losing ourselves and after an hour we find ourselves already halfway there. If first the snow gently rested on our shoulders, now it almost begins to beat on our head. The pits and holes in the ground begin to fill up with water, and there are many puddles popping up here and there in the soil. Suddenly we scan the tracks of the locomotive on the side of the road and decide to follow them. The sure thing is that they will lead us with certainty to the quarry.The road opens up and becomes wider, probably because it was once used for the passage of large. At the second hour we find ourselves in an open space, surrounded by newly planted young pines. In the distance we finally see the quarry. Taken by joy and happiness, we are going to quickly reach the enormous pit that characterizes the landscape. In our eyes appears a scenario that reminds us of the red planet, Mars! 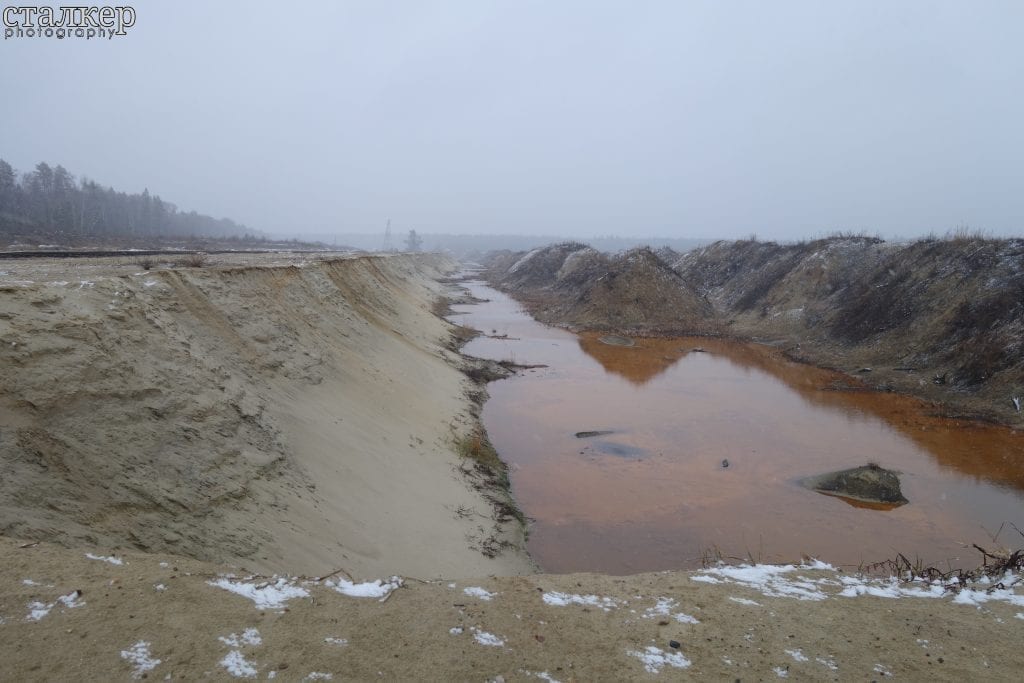 Almost as if from one moment to the next we await the arrival of the extraterrestrials, we scrutinize the surrounding area with incredulous eyes. The long and deep depressions of the quarries are interspersed with long and high sandy ridges, which gradually turn into flat-field sand fields covered with pines. Not far from the quarries, these fields resemble normal vegetable gardens: the height of the seedlings does not exceed tens of centimeters, but if one continues to move towards the center of the excavation area, the age of the plantation gradually begins to rise until to reach 60-70 years. The color of the water is a ferrous orange, almost close to the phosphorescent in certain points.

Slowly we approach the first excavator, very slowly and always looking around. Our shoes sink into the muddy and sandy soil, while from time to time we put our legs on the rails and try to do the acrobats without getting too dirty. 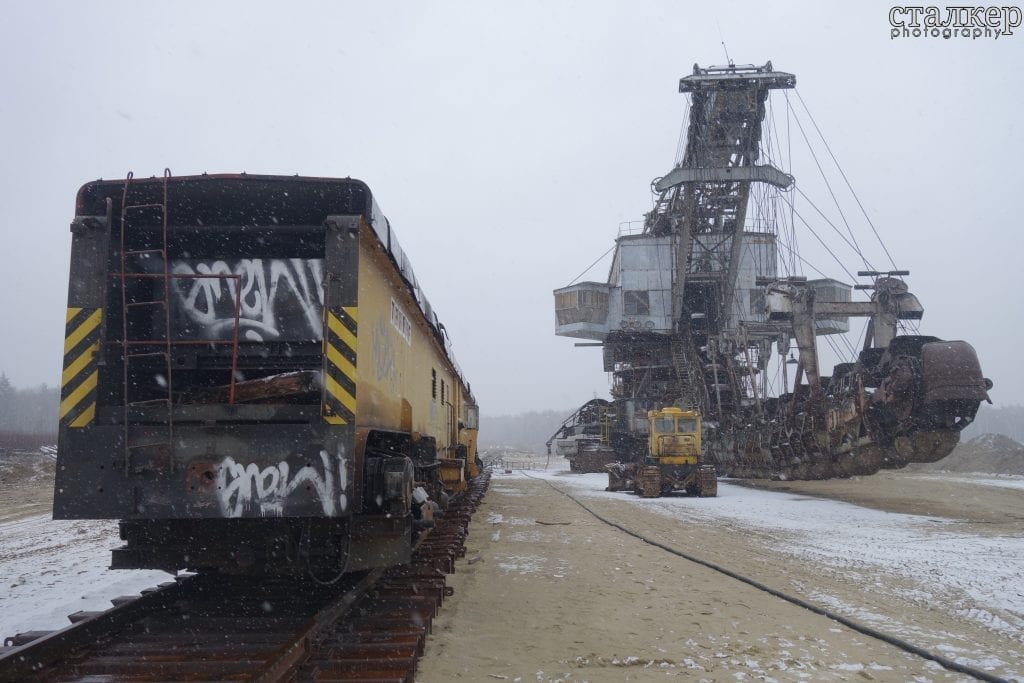 Only once we arrive under the huge beast we realize how impressive it is. The Abzettser almost roars like a lion with a steel mane. In front of him the freight train and the bulldozer are simple poodles.
All of a sudden a gentleman comes up from the top of the machine mumbling some phrases in Russian. In return my adventure companions ask him if a tour could ever be possible inside the monster and he agrees to take us with him.

Having said that we climb up the stairs until we reach the control cabin. It is here that we have the pleasure of getting acquainted with the two guardians of the machine, who, after asking us for the beauty of 100 rubles apiece, will make us sit in their kitchen / dining room / bedroom to enjoy a quite tasty lunch.
We open our bags and take out everything we need to pull out. Meanwhile, the two elderly gentlemen warm us up with borsch and coffee and, so as not to make us feel alone, they turn on the television: a show from the 90s, as entertaining as stupid. 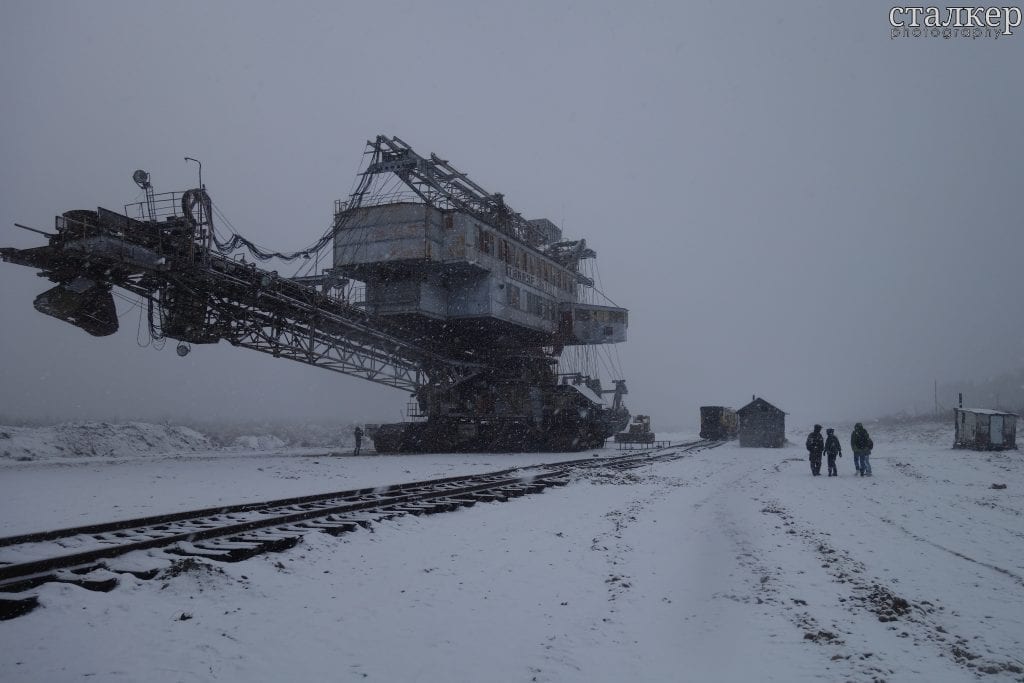 After our lunch, one of the two gentlemen decides to show us his house, his personal jewel. For an hour we go up and down in the meanders of the sand-eating machine, in one of Germany’s meanest diggers. Once we reach the roof we are hit by a snow storm. Everywhere around us was filled with orange liquid, which contrasts with the white of the newly fallen snow. The cold targets my poor and fragile fingers, so I decide to return to the cabin. 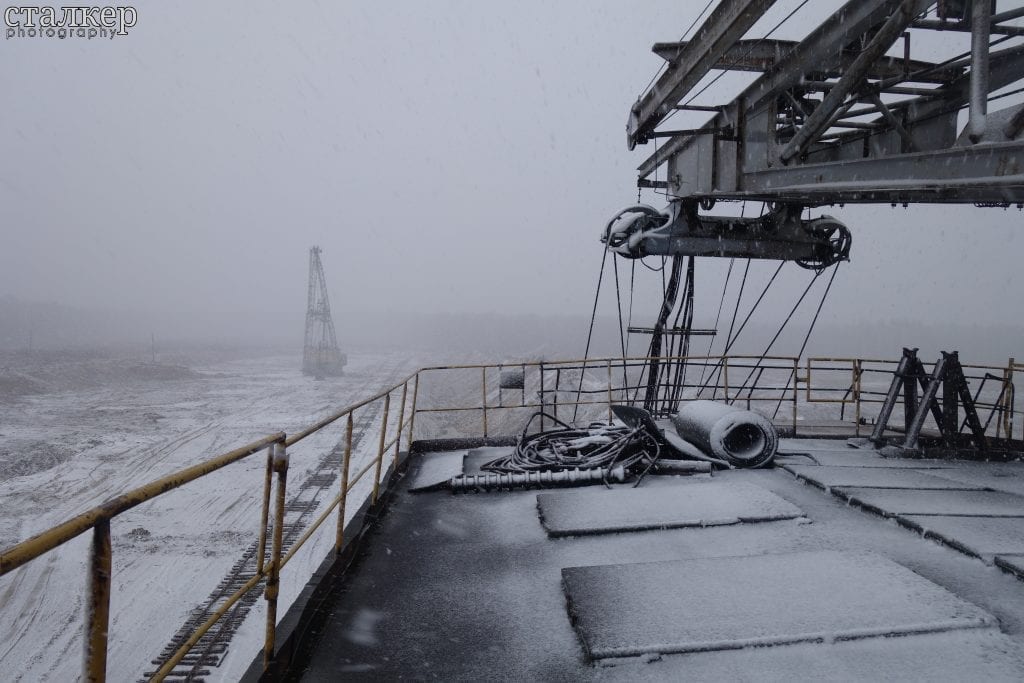 Two hundred meters away there is a second excavator, as tall as the first but certainly less impressive. I manage to climb up to half, not daring to go to the top using the ladder. The cold made my hands a block of ice, and touching the bare iron makes me feel a strong pain in my fingertips. 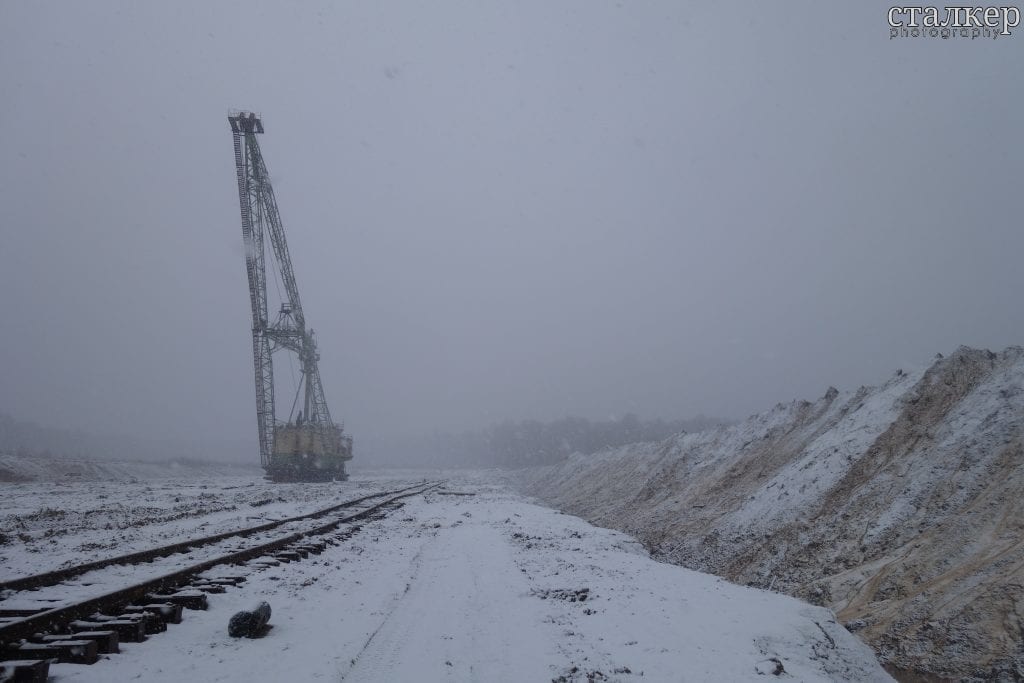 The return is one of the most difficult part.
The climate grips us and keeps us tight without leaving us an escape route. The walk puts a strain on our abilities, while water penetrates into every crevice and impermeability of our clothes. Wet and now with nothing to lose, we let ourselves be lulled by the force of the wind and the delicate but pungent touch of snow.
After two hours of walking we finally arrived at destination, where our return train to Moscow will be waiting for us. 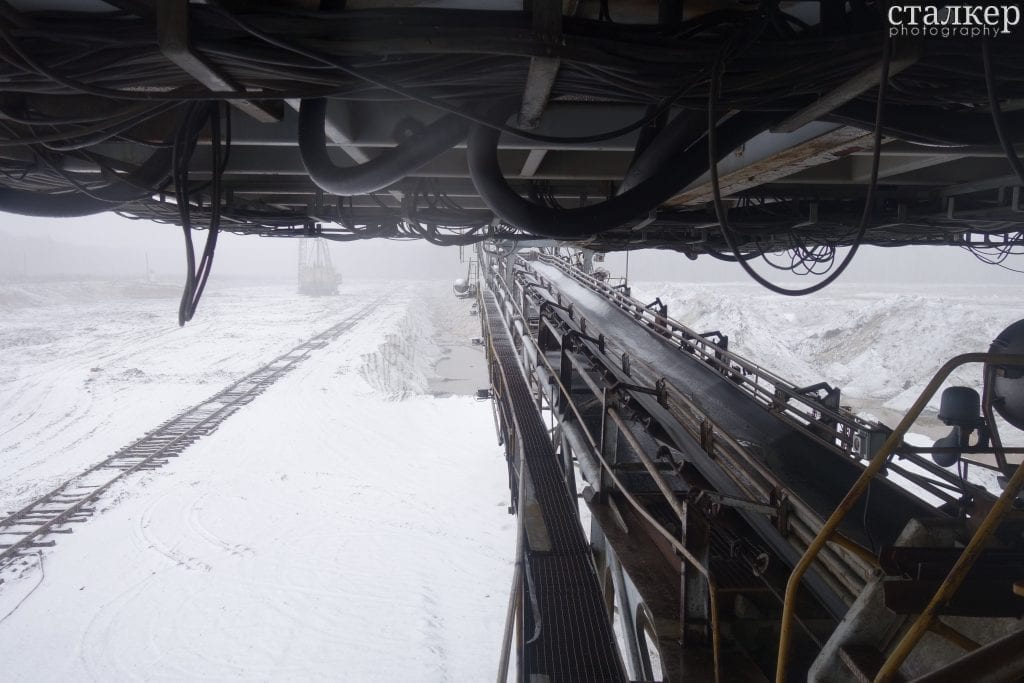 These otherworldly landscapes, where the monsters “Abzettserah” stand out and play a leading role, make the Lopatinsky quarries a natural and artificial reserve, one of the most interesting and unusual places in the Moscow region, which attracts more and more tourists every year.