The clear water, almost bright blue at certain points, flows down through a stream that starts from the mountains and drops it through a waterfall in the lake. The train station, almost as if floating in water, gives off something mysterious.

The abandoned Psyrtskha train station is located in New Athon, near the Озеро Псырцха waterway.
As we have already mentioned above, visiting abandoned places in Abkhazia is not a problem as you will not have to worry about any guardian or climbing over any fence. 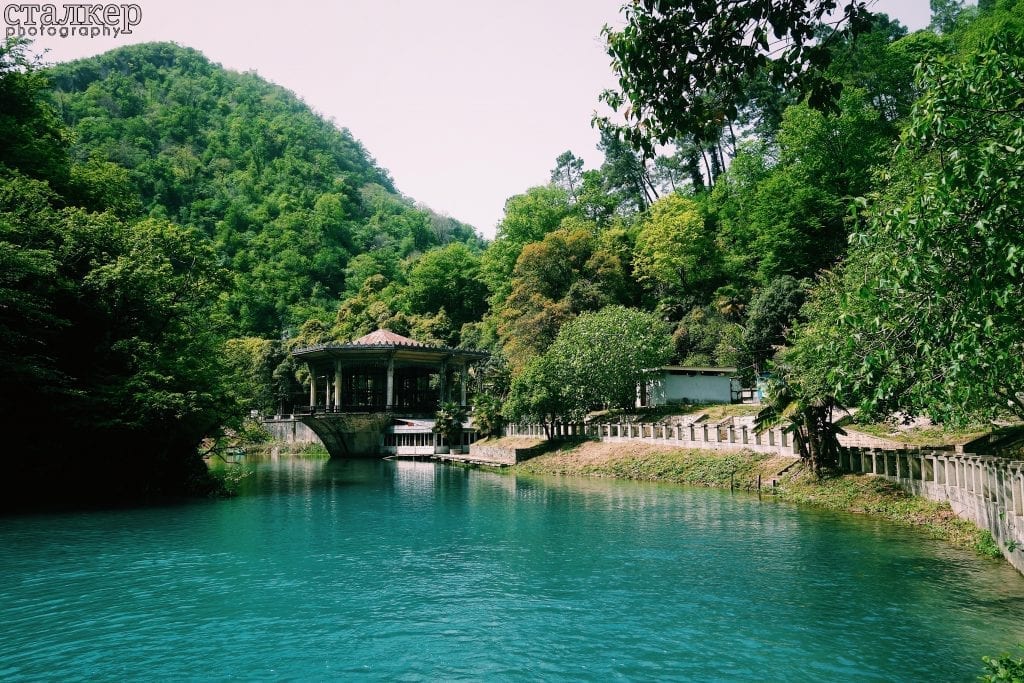 Psyrkha (abh. Ӡsyrӡkha, translated into Russian: spruce spring) is a stopping point of the Abcasa railway on Tskuara – the section of Novy Afon, located in the city of New Athos in the republic of Abkhazia.
The station was opened in 1944 with the name of “Dacha”. In 1951, the platform received the Georgian name – Agaraki. In 1967 the station changed its name again, and was renamed with the name of the nearby river – Psyrtsha.

In 1992, during the Georgian-Abkhaz war, ventilation systems were deactivated. Given the hostility also the transit of connecting trains ceased and only resumed at the end of 1993. From 1993 to 2002, the electric train with the Sukhum – Psou section reached Psyrtsha, and in December 2002 the route was extended to Adler. In 2006 the transit was reduced to the city of Gudauta. In 2008 they again decided to eliminate the Psyrtsha stop. A year later, during the Christmas holidays, the transit of the trains was restored even if the station still remains unused.

One of the places, if not the most famous abandoned place in the whole Abkhazia is the abandoned station of New Athos.

A sunny day accompanies my journey to the station, passing through several paths unknown to many. After about ten minutes I find myself in front of a small waterfall, and an annoying man with a beard approaches with a monkey on his shoulder. I cut him off, first insulting him and then pushing him away with his hand. In Abkhazia I have already seen enough of how they exploit animals for money. 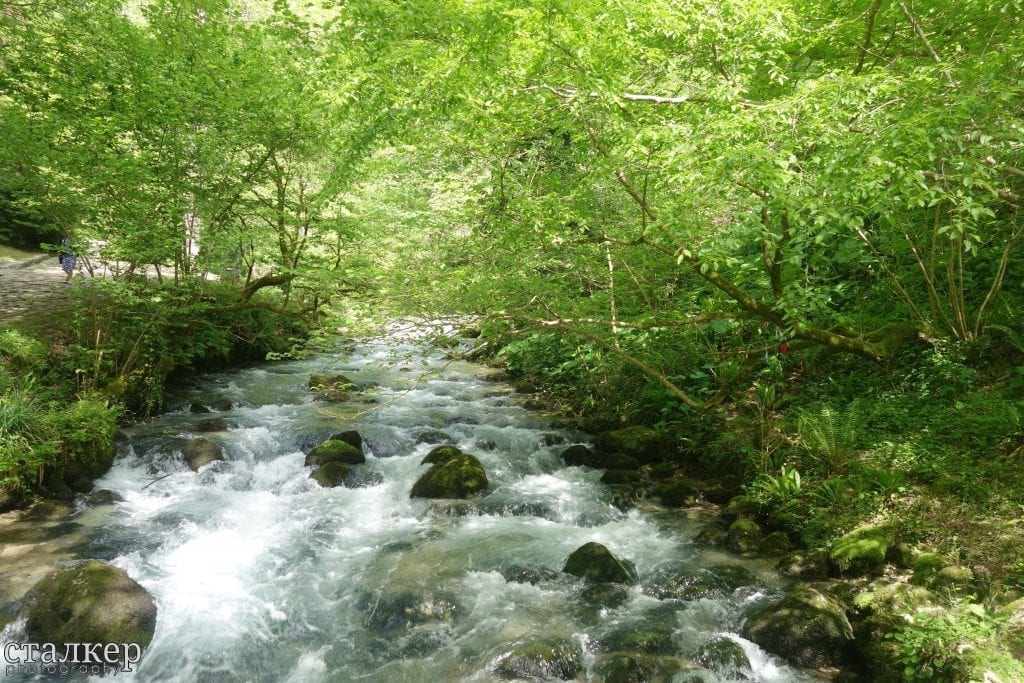 The river flows through the gorge between the mountains, where it is possible to take a tour, where near by there is  the cave and the cell of Simon Canaanite. In this place the river forms an artificial basin with the waterfall and here, between 1892 and 1903,  was born one of the first hydroelectric power plants of Russia. 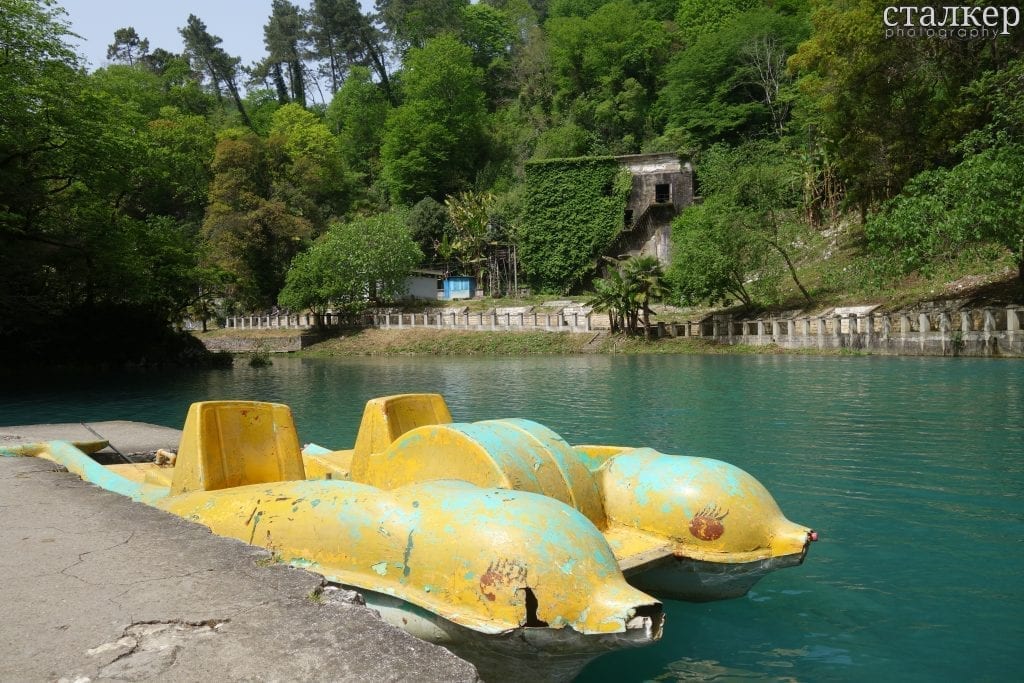 The splashes of water slightly wet my face, two beautiful black and white birds stand on the edge of the rock, a few millimeters from the water to peck for food. The water from time to time, moved by the motion of the waterfall, reaches to touch the tail of the birds that with a jump rise from the rock and then return to it.

I venture over the stone stairs and pass in front of a pedal boat left to die on the shore of the lake. Almost as to enter into a parallel world, I go through a stone door with numbers and inscriptions engraved on the upper part.
Suddenly I see the famous abandoned station, which in all its majestic beauty emerges as if it were suspended in the air. 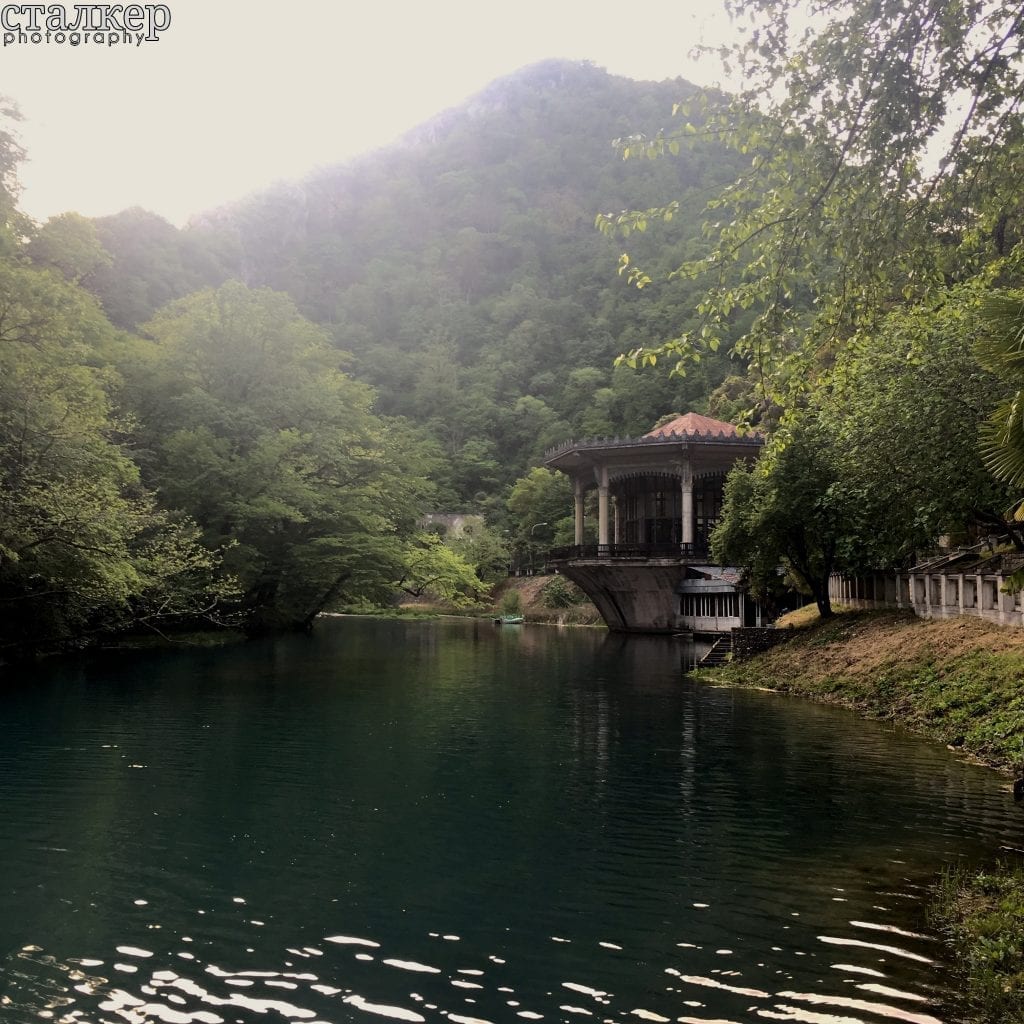 The platform is built on the left bank of the Psyrtskhi reservoir on a small stretch between the bridge over the river (towards Psou) and the tunnel (towards Sukhum). Behind the bridge another tunnel begins. At the top of the tunnel portals there is the engine room, where the ventilation systems are placed. The guard posts are located near the portals of both tunnels.
The abandoned station now in disuse is destination for curious tourists and souvenir sellers.

Some glasses are broken, but the walls, the roof and the typical molding and the stucco decoration are still intact. The surrounding landscape transforms this tiny train station into a magical place.

And in fact, the seven-pointed star drawn on the floor is considered the symbolism of the wizards, the divine fire and the thirst for freedom, the unity of the spiritual and the material. Since ancient times, Georgia has used a star in its emblems, and here on the floor of Psyrtsha station we can observe this mystical symbol.

After traveling back in time, I head to the cave of Simon Canaanite. I put my feet in the icy water of the stream, and then I stretch out in the grass sunbathing as if I were a cod. At that moment my thoughts begin to dissolve and I let myself to be guided by the current …
Despite the abandonment, the place itself is imbued with a natural and architectural charm, seasoned with a hint of magic.