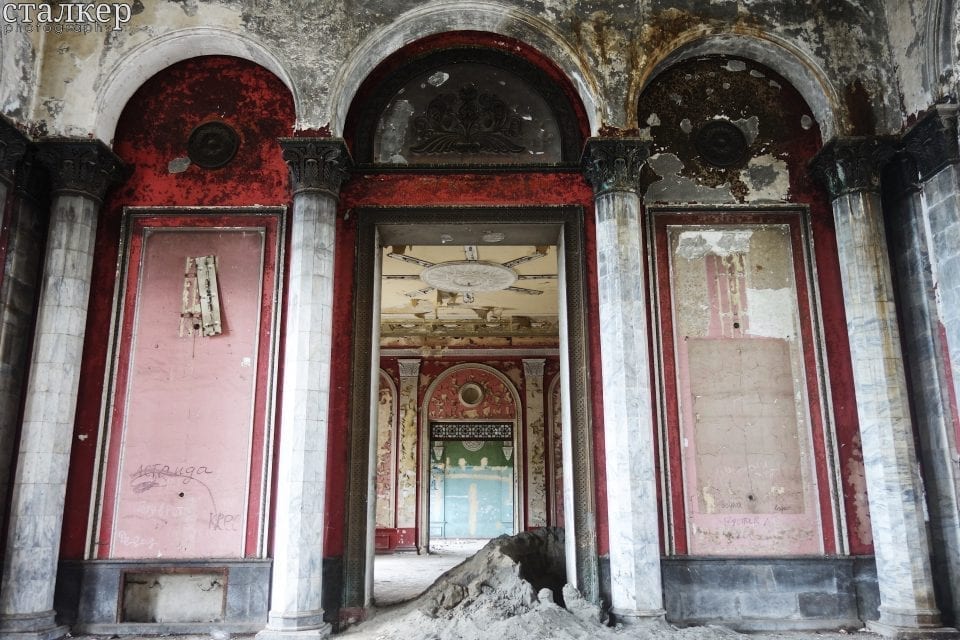 Here I am arriving in the capital of Abkhazia, completely exhausted, after an endless hitching ride and with the heat that hits my head.

The Sokhumi train station is well known to everyone. A few kilometers from the center, and easily accessible. After passing the myriad of taxis that pile up in the parking lot, you will be able to pass through sheets to enter the building. Unfortunately, access to the upper floors has been walled up and is still inaccessible. 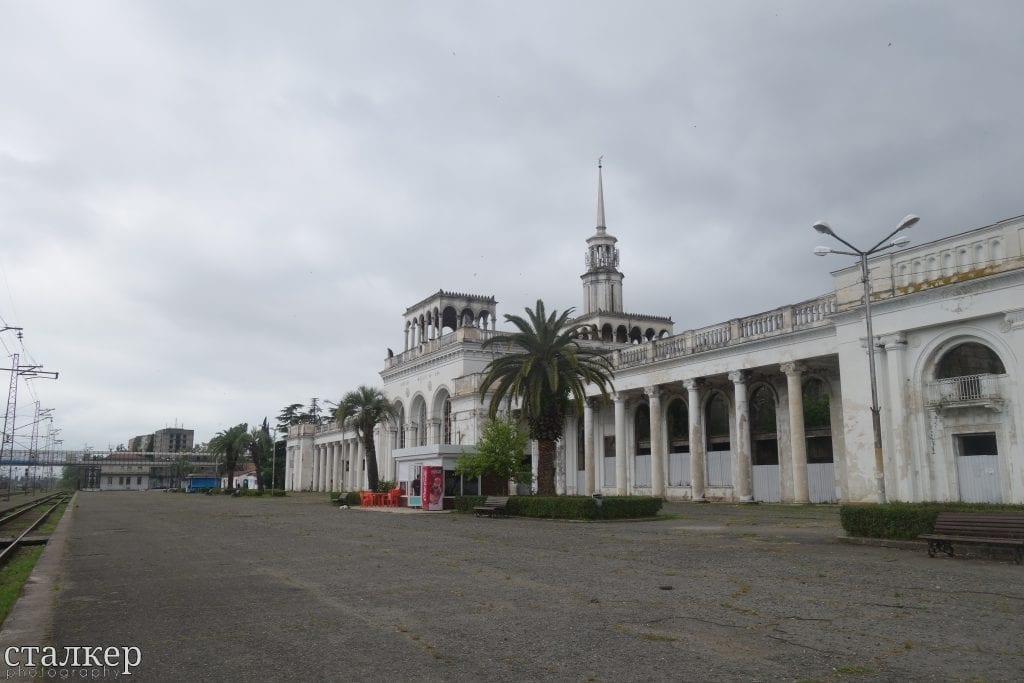 The history of railway communication in Abkhazia dates back to the 1930s. In 1940, the first section that was opened was the one that link Inguri to Sukhum, along with the Tkuarchal branch, and in 1942 the construction of the Sukhum-Adler railway lines was completed.
From that moment on, the direct train service began to operate through the Black Sea branch, which in 1949 became part of the “Transcaucasia“. The Sukhum railway station appeared a little later, on 1 December 1951.

At the beginning of 1992 the Sukhumsky railway station was again operative; there were 12 intercity trains and two suburban directions:

During the patriotic war of the Abkhazian people, railway communication through Sukhum station was stopped. The station building was used as a warehouse for weapons and ammunition. Although during the war the building was not severely damaged, in the years following the conflict it was abandoned and repeatedly looted.

After the end of the war, only two suburban trains traveled the Sukhum station towards the Russian-Abkhaz border: one towards Psou station and one, on the east, towards Ochamchyra station.

The modern history of railway communication in Abkhazia begins in 2002. In the same year, the train was launched on the Sukhum – Sochi route. With the help of Russian companies, mass restoration of the railways began in 2004. At the time of repair, the movement of electric trains to Sochi was suspended. On 10 September 2004, after completion of the repair work, the first long-distance Sukhum – Moscow train appeared. It was difficult to call it a full-fledged train; these were many wagons which, at the Veseloe station, became part of the fast train n. 75/76. However, a beginning has been made. Currently, the following trains arrive at Sukhum station from Russia:

The Sukhum railway station project was carried out by the architects Lola and Levan Mushkudiani. The station was built in the style typical of that time: the Stalinist empire. To give an example, the train station and sea port of the city of Sochi were built in the same style.

The facade was covered with marble and granite. The windows and cash registers were made of chestnut wood and the restaurant floor was covered with parquet. The cost of finishing works in 1951 cost the Treasury 315 rubles, which at that time was a huge amount of money. 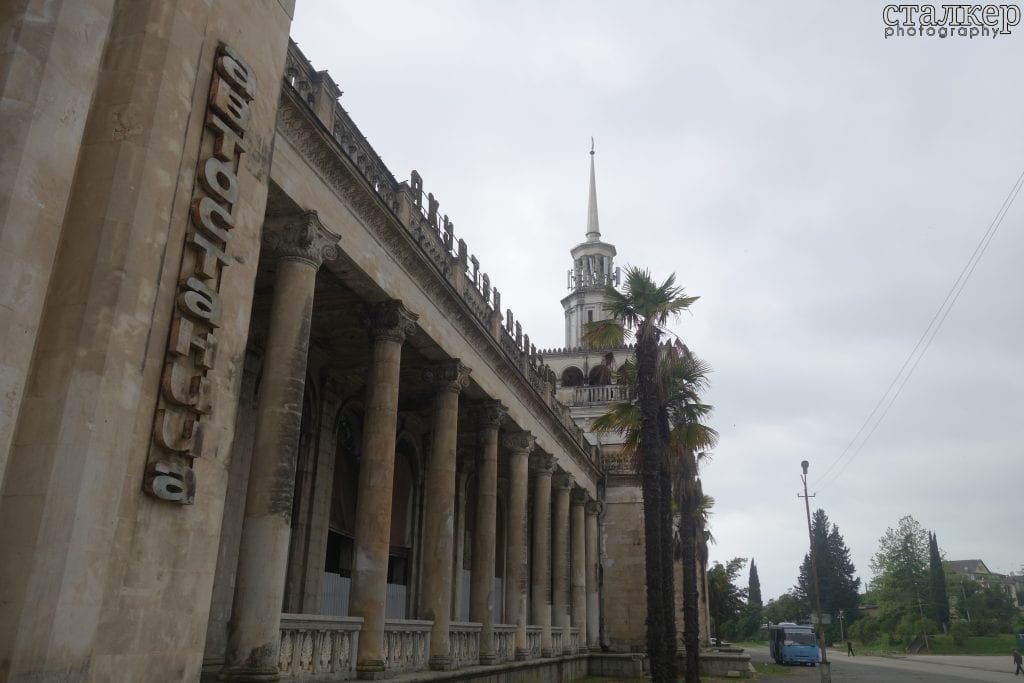 In the 1950s, Sukhumsky railway station could contain up to 1000 passengers simultaneously. In addition, it had separate waiting rooms for suburban trains and long-distance trains. The separate exits for the ramps represented an innovation at that time and were recommended for use in other cities of the Soviet Union.

In 2016, a reconstruction attempt was made, starting with the repair of the roof. The building was surrounded by a fence, but due to lack of funds, repairs were suspended. At the moment, there are only offices for the sale of cash-only tickets located in kiosks next to the station. 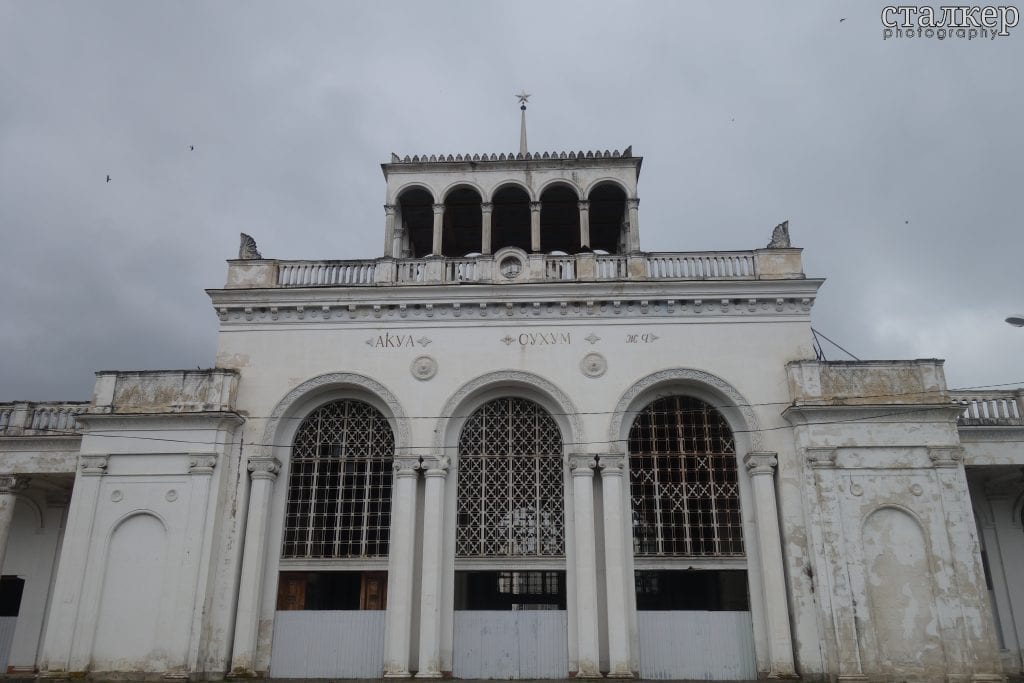 As soon as I passed through the sheet I put my feet in a sea of ​​bird droppings. A real pigeon house, where I am the guest (or rather the intruder). The abandoned train station reminds me a lot of a mix of two different films: silent hill and stalker. Everywhere I look, there are pieces of stucco that are now on the verge of coming off and falling to the ground.

The earth that has been accumulated at various points in the floor reminds me instead the final scene of the film stalker, where the protagonist reaches the room of desires.

The first room is where the ticket office was probably located, and is the largest of all. Several arches with Ionic style columns support the second floor. The red color placed inside some arches goes to make contrast with the greyness of the walls and the acrid black of the ceiling. 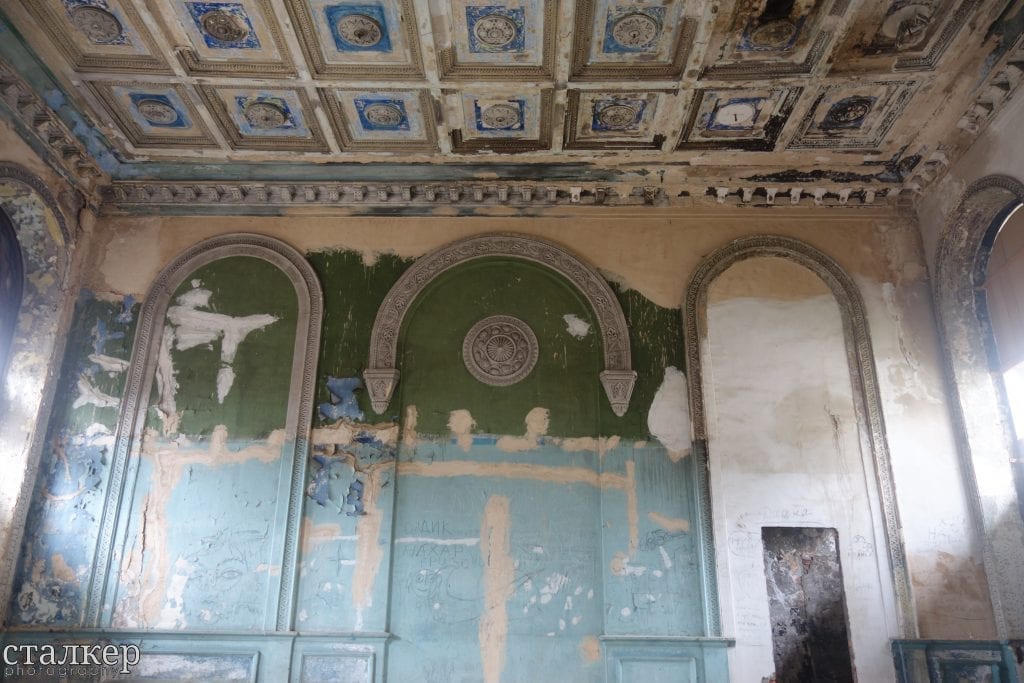 In the second room a paler red goes almost entirely to color all the walls. The ceiling is covered with coats of arms, but with a missing piece of the puzzle in the center, namely the chandelier.

On the other side of the station there is no ceiling, and the weed grows luxuriantly in some points of the floor. Some stairs lead to a second floor that allows you to have an almost decent view from above, but without having any chance of going further. 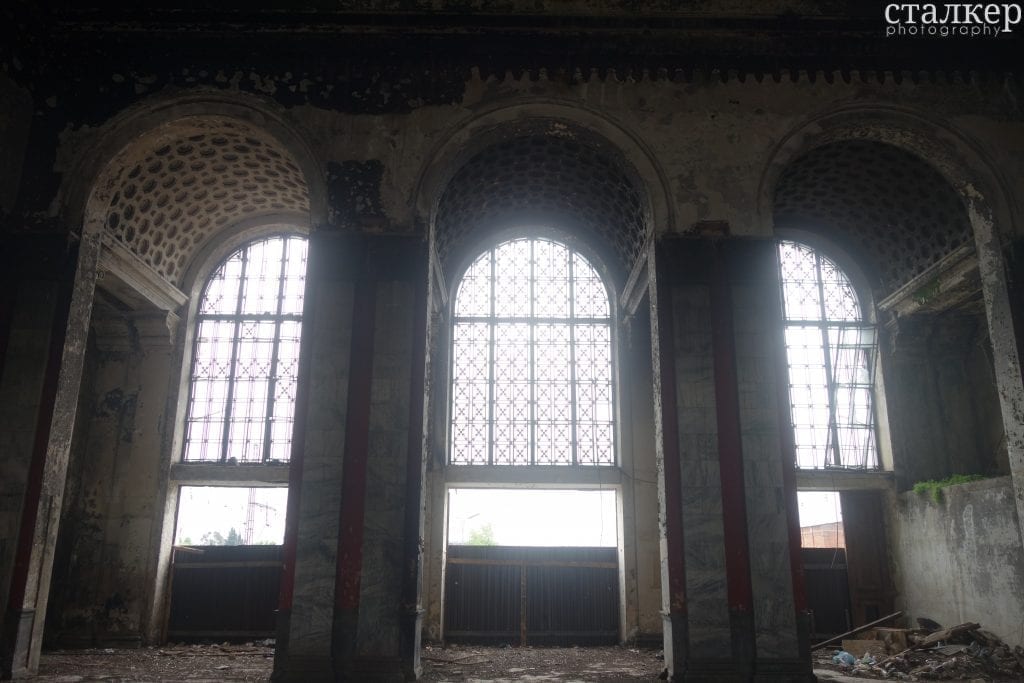 I move out of the station, circling it and reaching the tracks. Nearby there is a kiosk from which I try to get some information, but in the end I am not told anything except a bunch of words with no logical connection. The imposing station but at the same time powerless awaits an uncertain destiny, a guest rarely of some curious visitor, of some homeless pigeon, of drunkards and aimless travelers.