Finally, after hundreds of abandoned places, I managed to reach my final destination: Akarmara.

The abandoned city is located right in Akarmara, about thirty minutes away by car from Tkvarcheli, in the mountains of Abkhazia.

Akarmara was once a lively mining town built for coal mining by German prisoners captured during World War II.  Around 40,000 people lived in the cluster of villages and cities.

Since the 1970s / 80s the war, the economic crisis, together with the end of the USSR shortly after, emptied the city of the 5,000 people who lived there and the mines were closed. 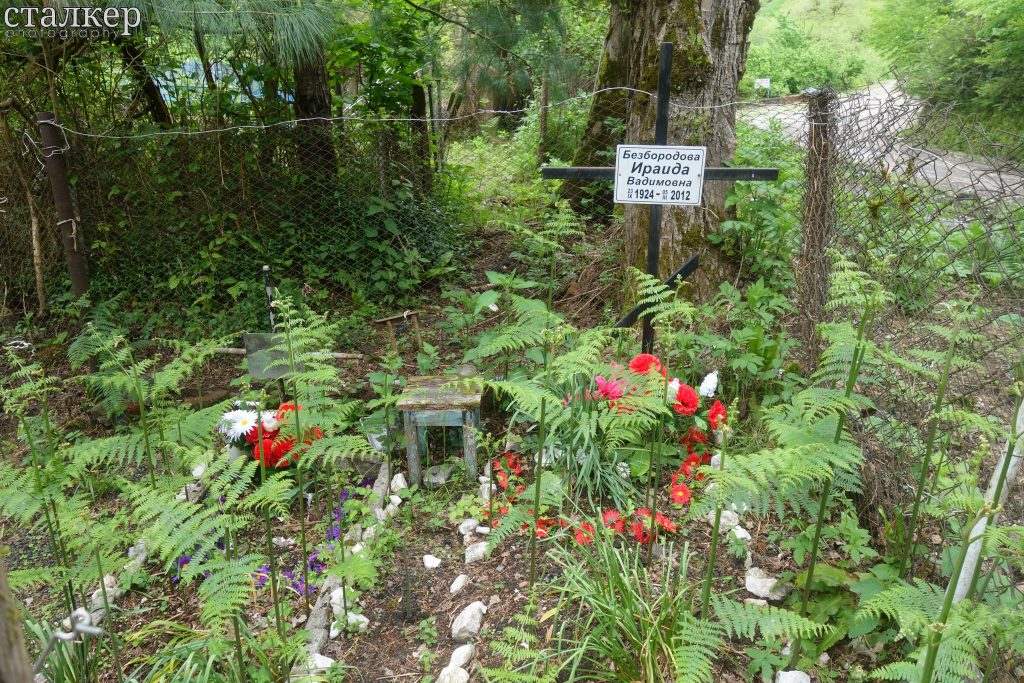 In the early 1990s the siege of Tkvarcheli meant that Akarmara was effectively cut off from the rest of Abkhazia as there was only one main road that cut straight through Tkvarcheli.  For 413 days the city could no longer supply itself so that it had to rely on helicopter supplies from Russian and separatist forces.  The siege of Tkvarcheli still remains the greatest trauma of war for the population.

During the Soviet period, different ethnic groups lived and worked together in the area: Russians, Greeks, Abkhazians, Georgians and Armenians.  Many of them left their homes during the war.  Today live here mainly Russians and Abkhazians. 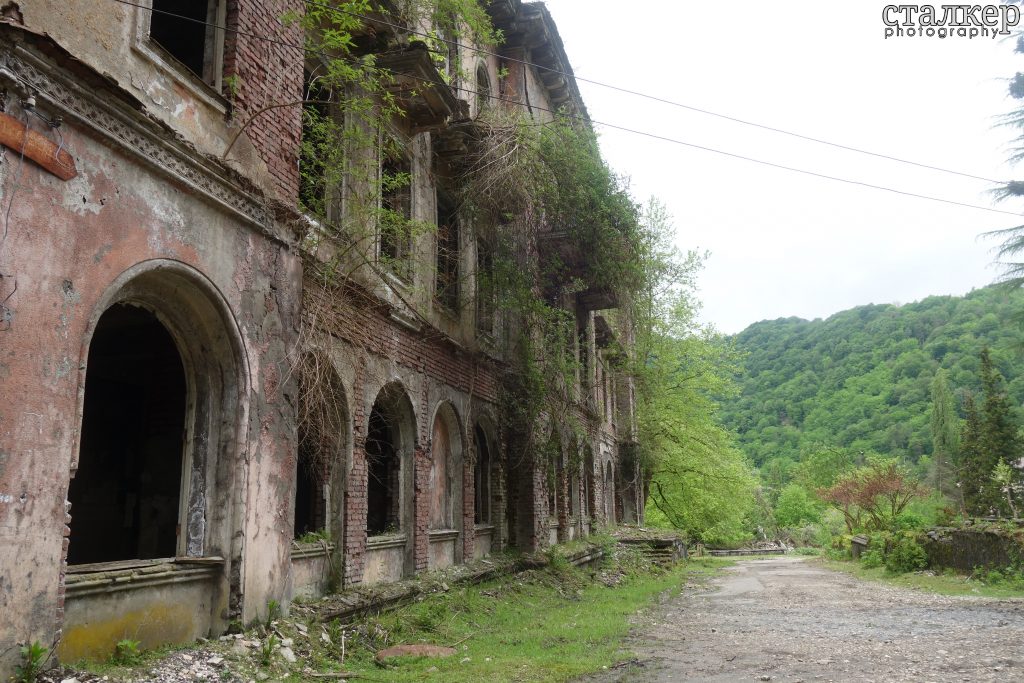 In the summer months there is a constant stream of 4x4s with loud music that takes tourists from the coast to the hills to see Akarmara and its mines.

There is talk of restoring the city to a resort to show its forgotten splendor, but this will require a lot of money and since Abkhazia is an unrecognized republic foreign investors are still not interested in buying. 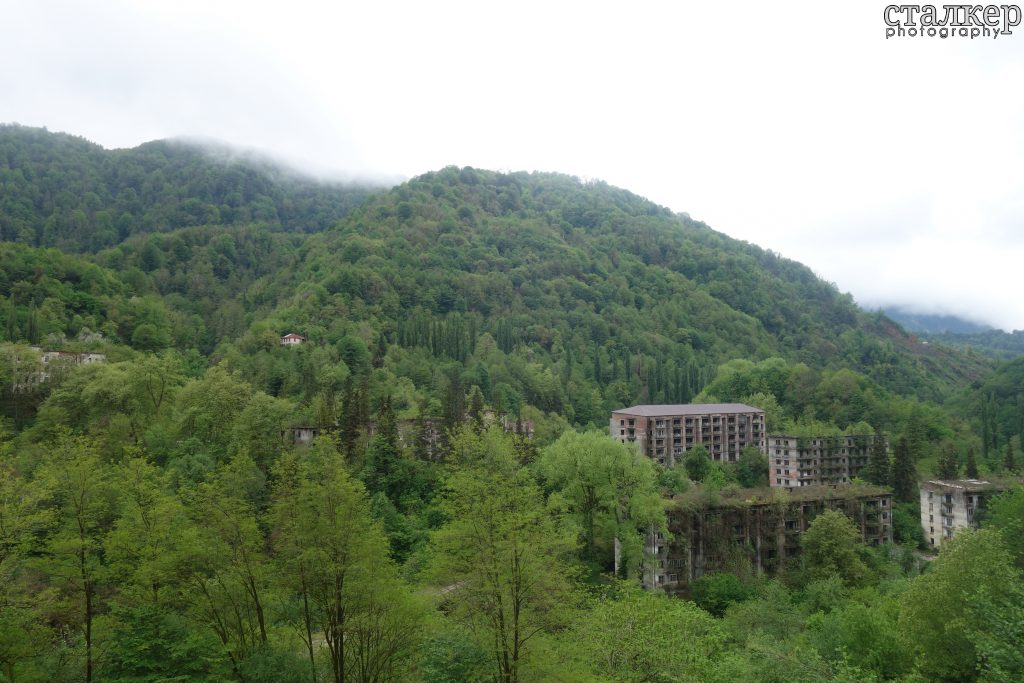 I am “picked up” by a couple, father and son, in the car just after I arrived in Tkvarcheli.

I close the door and off I go through the steep streets of the Abcase mountains, passing over bridges and rivers over and over again, meeting faces very surprised by our presence.  The physical features of the locals are close to those of the peoples of the Caucasus, Chechnya and Georgia.  Thick and black eyebrows, noses of a certain thickness, bushy black hairs with two deep eyes like endless wells.  In the half-hour journey that takes us to the gates of Akarmara, the oldest gentleman describes a bit about his life and the surrounding environment, including a mountain considered sacred by them and a place of pilgrimage.

After the last bridge the driver stops and shows me his home.  As usual in those parts he invites me to his house, but unfortunately I have to refuse because of the little time I have left.

So I begin to explore the city, starting with a staircase that almost seems to have no end. It takes me to a building of which I can only visit the ground floor.  In the adjacent courtyard two families live with their children and pets.  Life goes on. 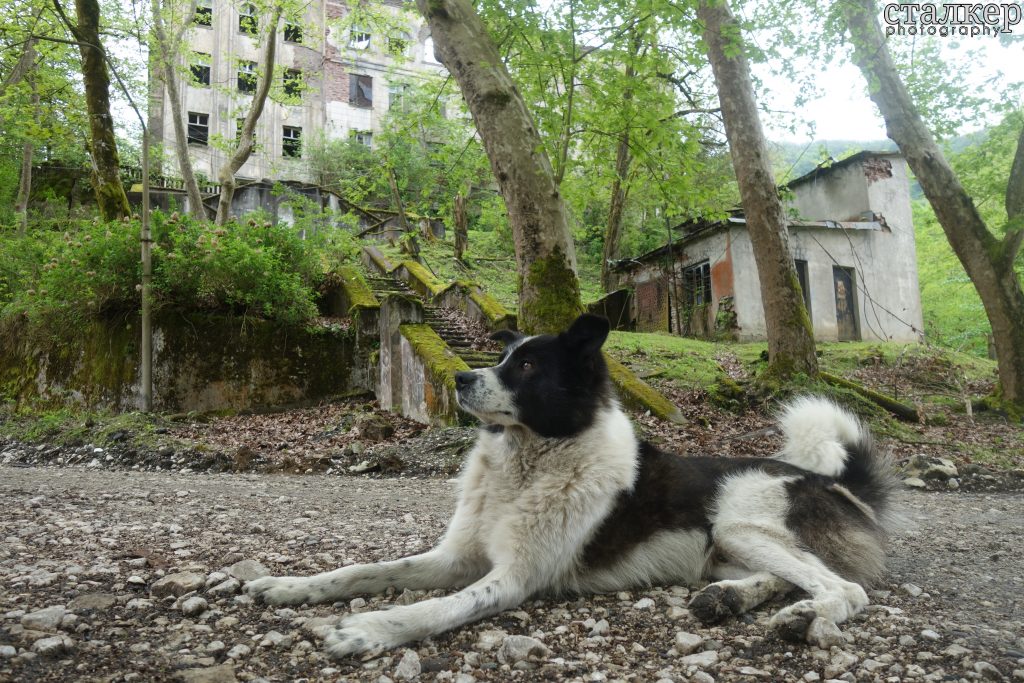 Large Soviet concrete buildings, khrushchyovkas (five-story buildings built in the early 1960s), are in ruins.  They are considered densely populated even if only one or two families live there.

Before the war, life in the village was lively, with community centers and nursery schools.  Even now, among the ruins are cobbled streets and magnificent buildings.  The people who once lived here and played a central role in the Soviet economy have now fled.

Most people work for a small Turkish coal mining company – Tkuarchalugol.  Each family grows vegetables and raises cattle, pigs, chickens on its own.  Before the war they did not usually cultivate and raise animals.  Now they are forced to do so in order to survive.

Demand for goods in the local store is low, so to buy food or household items, people must first call the shopkeeper, who lives nearby, and ask if he is at home.  In winter, the district administration provides candles and free bread to the villages. 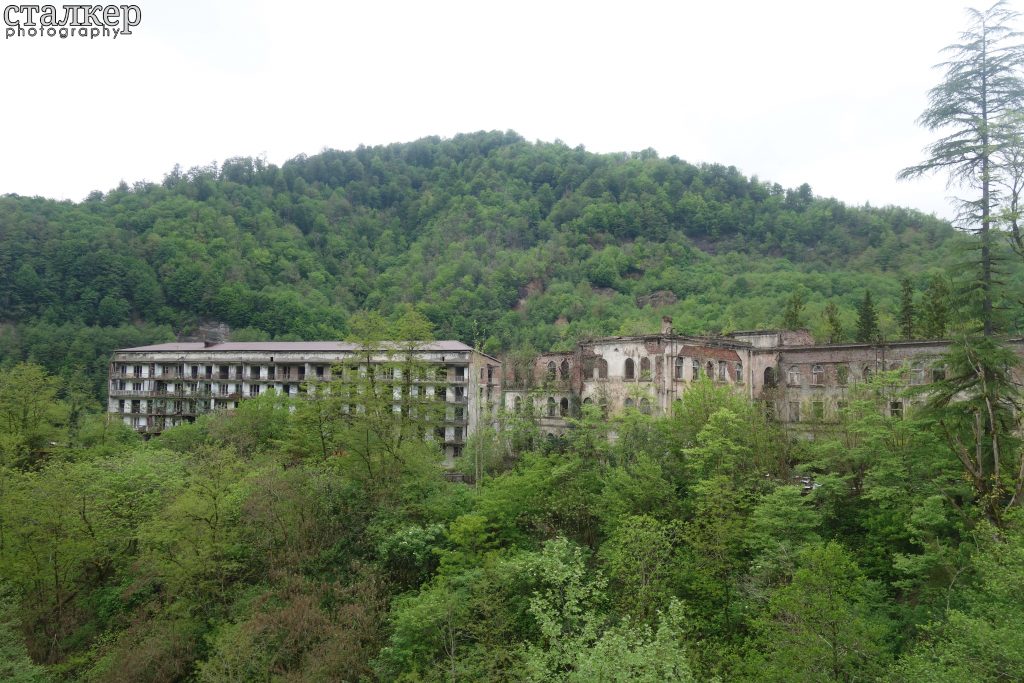 Once a week, residents go to the Tkuarchal market.  Twice a week a bus leaves from the upper part of the district to Tkuarchal.  A bus also takes children to school.

On the side I take a small road that leads me to two other buildings where, apparently, two families live.  The doors of the building are closed with a padlock and therefore I leave it alone.  Following a staircase I go back down and here locals chat without ever losing sight of each other.  A pickup truck passes by to give a lift and then disappears into the void behind an abandoned building. 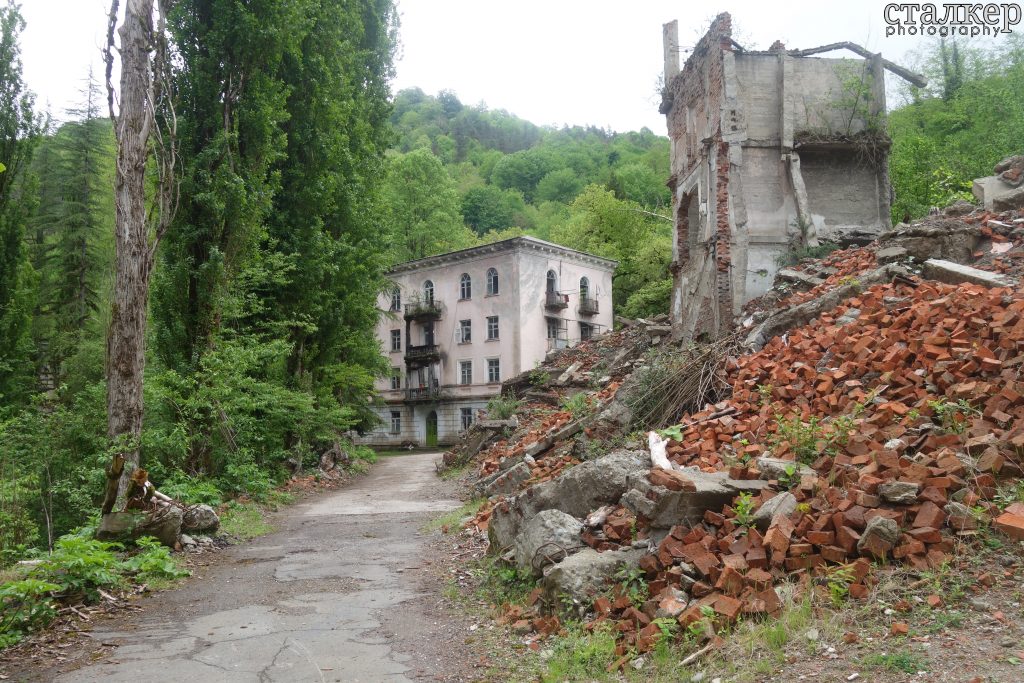 Return to my starting point and then continue downhill.  I meet some farm animals.  A family of pigs, turkeys, some dogs and goats.  All free to roam wherever they want.

Continuing to walk, I come across a wrought iron gate with a very special coat of arms.  As a curious explorer I approach and unroll the wire that keeps it closed. 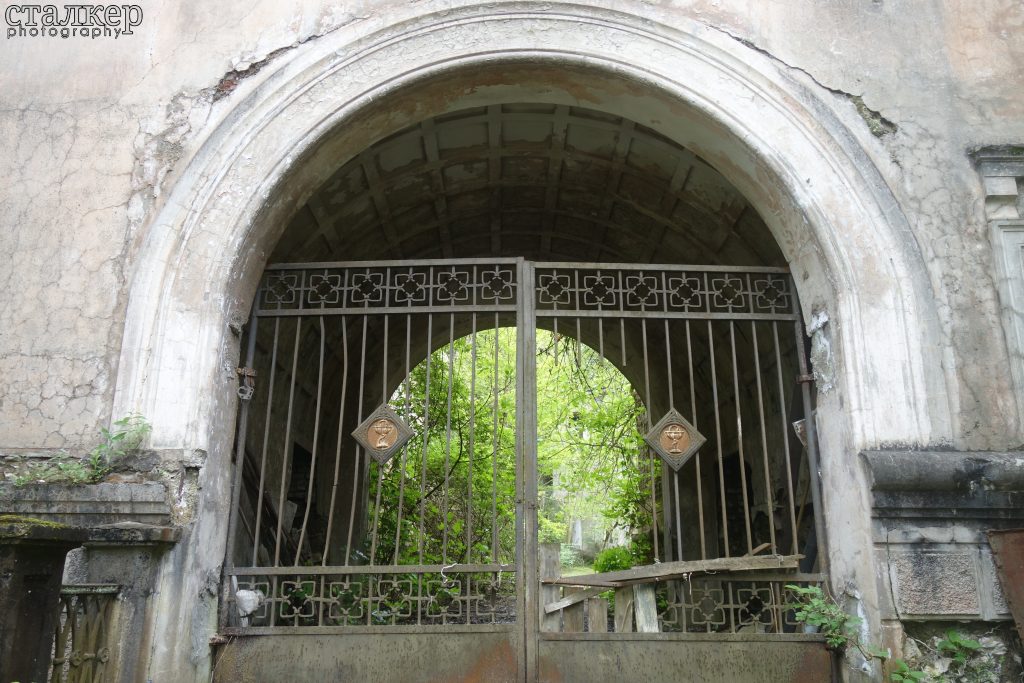 The interior is a simple condominium garden that now houses a beehive for bees.  In Abkhazia on my way I met many beekeepers and I must admit that the honey they make is very good.

Going on I bump into a little truck rusting but probably still working, a couple of scooters and a tractor.  Two dogs guard a house isolated from the rest of the apartment buildings.  They raise their heads, move their ears, bark and then get up.  One of them will be my protective guide for the rest of the exploration.

I turn to the right and I get closer and closer to the river in flood.

An apartment building, now without windows and doors, with lush grass growing on the terraces, invites me to go and explore it.

Rubble and garbage are everywhere and obstruct the passage.  The stairs are in very bad condition, with steel rods and rubble that are about to fall at any moment.  The rooms covered with moss, dust and debris.  In some there are still beds, in others there are ornaments and furnishings.  The upper floors being very unstable I reserve them for another time.  Coming out of the building I find the dog waiting for me impatiently.

I decide to let myself be led, and so we cross a bridge from which I have the sight of the impetuous river that crosses the city of Akarmara. 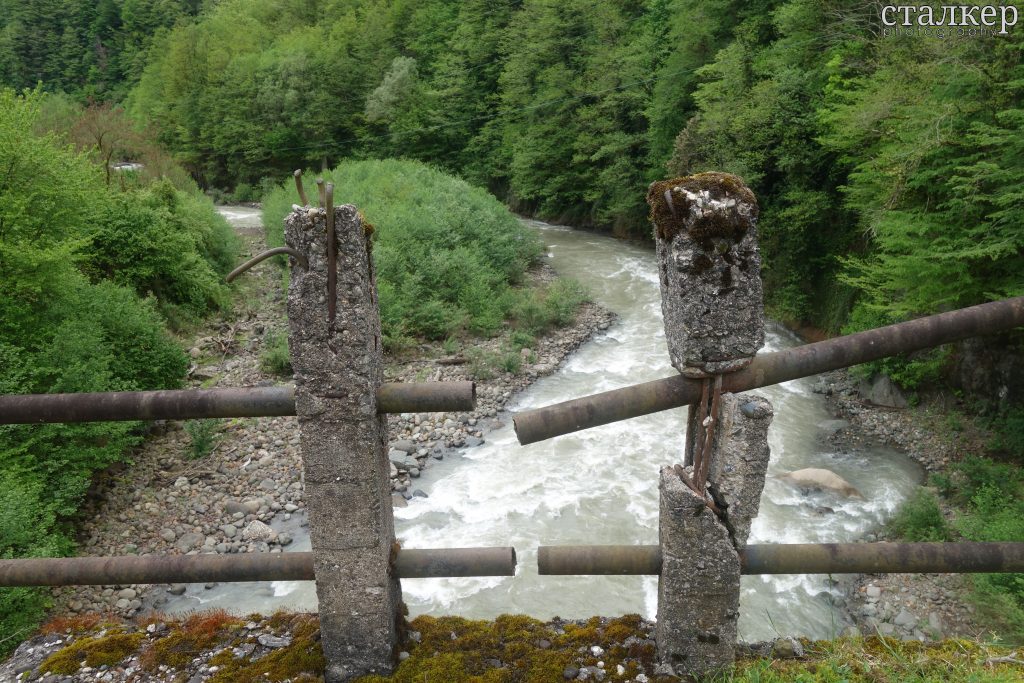 Going a little higher I have the possibility of having a better view of the surroundings and the city.  In the distance I see other establishments, and even more distant there should be the famous abandoned mines.  The city of Akarmara does not stop there, but gets lost in the thick vegetation, passing from village to village.  As mushrooms sprout the buildings, which brutally made their way into the mountain but now perish and die in silence.  The only ones keeping them on the death bed are the locals.