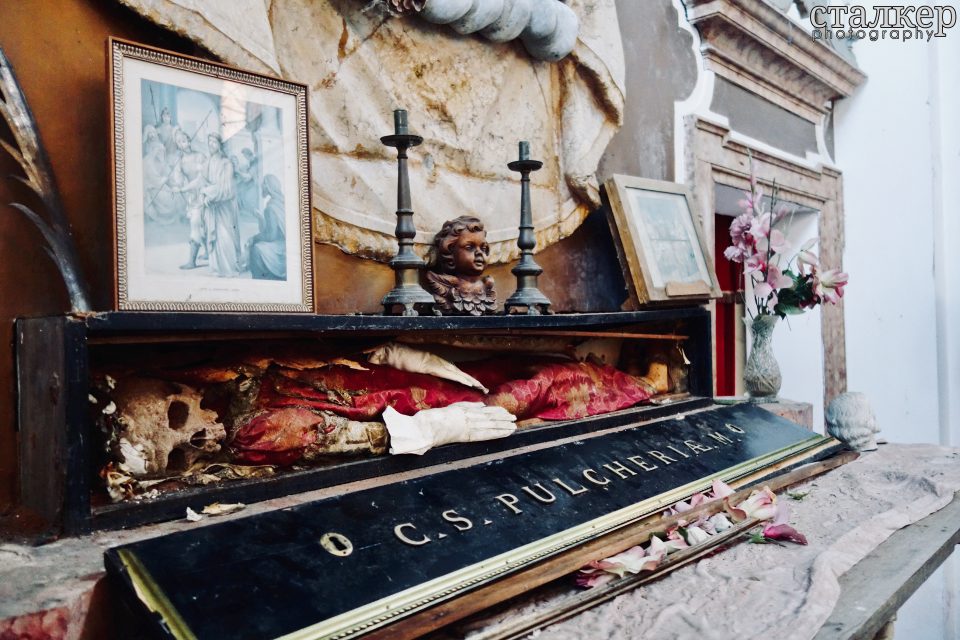 Exhumed from the Priscilla catacombs, the relics of an Empress of the Orient still lie intact inside this abandoned villa.

The Villa is located in province of Treviso. 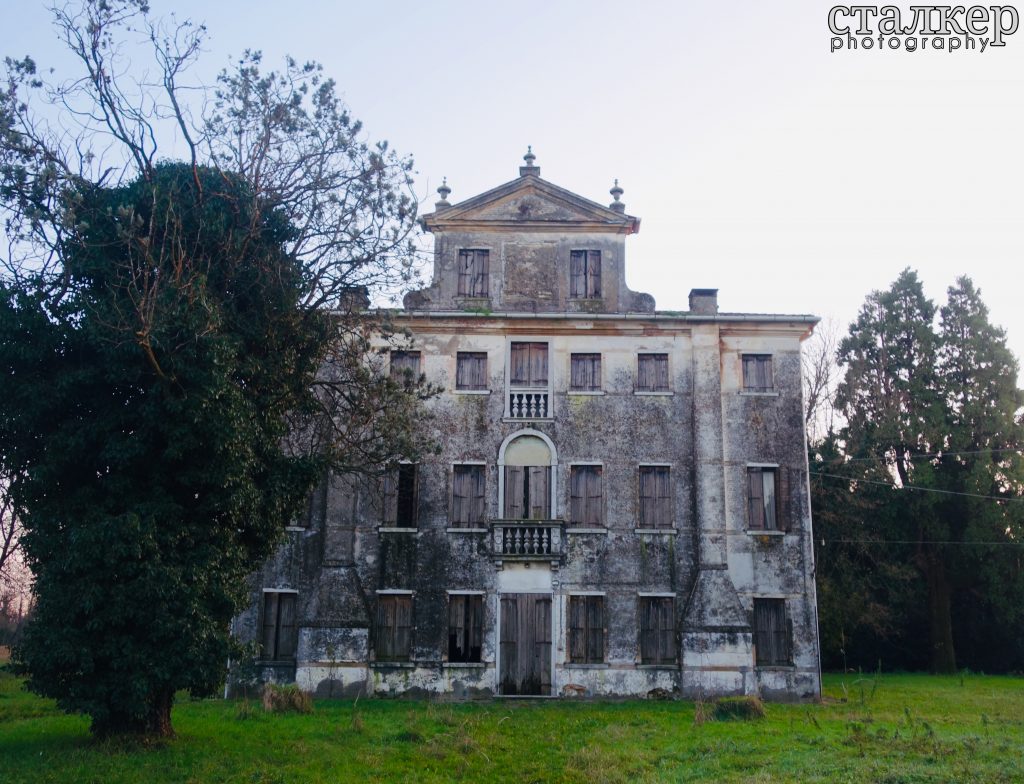 The owners of the villa are not known.
In 1700 it belonged to the Peruzzi family, then passed to the Coletti family and in 1920 to the Rigamonti family. Later it was purchased by the Cortellazzo family and finally by the Istituti Riuniti di Ricovero of Treviso.

The property consists of the seventeenth-century stately Villa and the Oratory of the Nativity of Mary (the latter was completed in 1758).

ELIA PULCHERIA, EMPRESS OF THE EAST

Elia Pulcheria belongs to the Theodosian Dynasty. Daughter of Arcadius and his wife Elijah Eudossia, and nephew of Emperor Theodosius I the Great, Pulcheria was the elder sister of Theodosius II. When the latter ascended the throne in 408 he was only a child: the regency was taken by the powerful prefect of the praetorium Flavius Antemius, but in 414 Pulcheria became empress and assumed the regency. She made a vow of chastity, to avoid being forced to marry a Germanic general, among whom, as the first suitor, was the Great Dane Ardaburio Aspare.

Conversion to Christianity and war against Persia

From 416 Theodosius II began to reign alone, but always under the strong influence of his sister. In the same year, Pulcheria had his brother remove all the pagans employed in the civil administration; she was a devout Christian, and under her influence, both Theodosius II and his wife Elijah Eudocia converted to Christianity. In 421 Theodosius II declared war on Persia because Pulcheria had suggested: persecution by the Persians against the Christians. Pulcheria did not oppose Arianism, the form of Christianity exercised by the Germanic tribes. 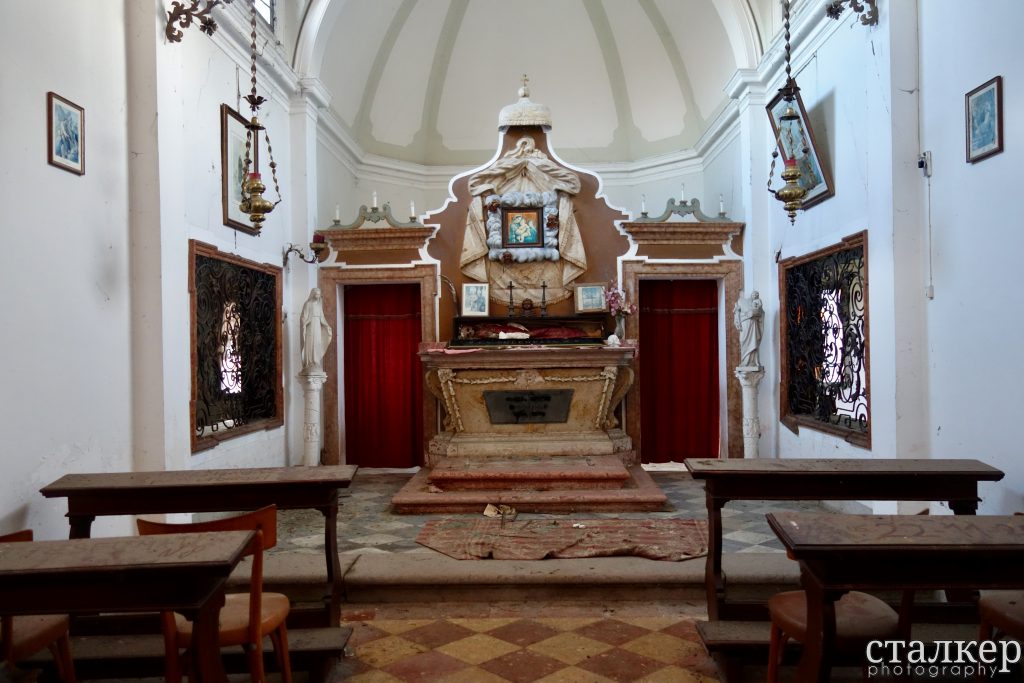 The empress also convinced her brother to drive the Jews out of Constantinople and to destroy the synagogues built there.

In 451 Pulcheria helped to organize the Council of Chalcedon to condemn Nestorianism.

Pulcheria had many new churches built in Constantinople, many of them consecrated to the Virgin Mary. The empress died in July 453.

Pulcheria was recognized as a saint by the Catholic Church and the Orthodox Church. In the Roman Martyrology, she is remembered on September 10. 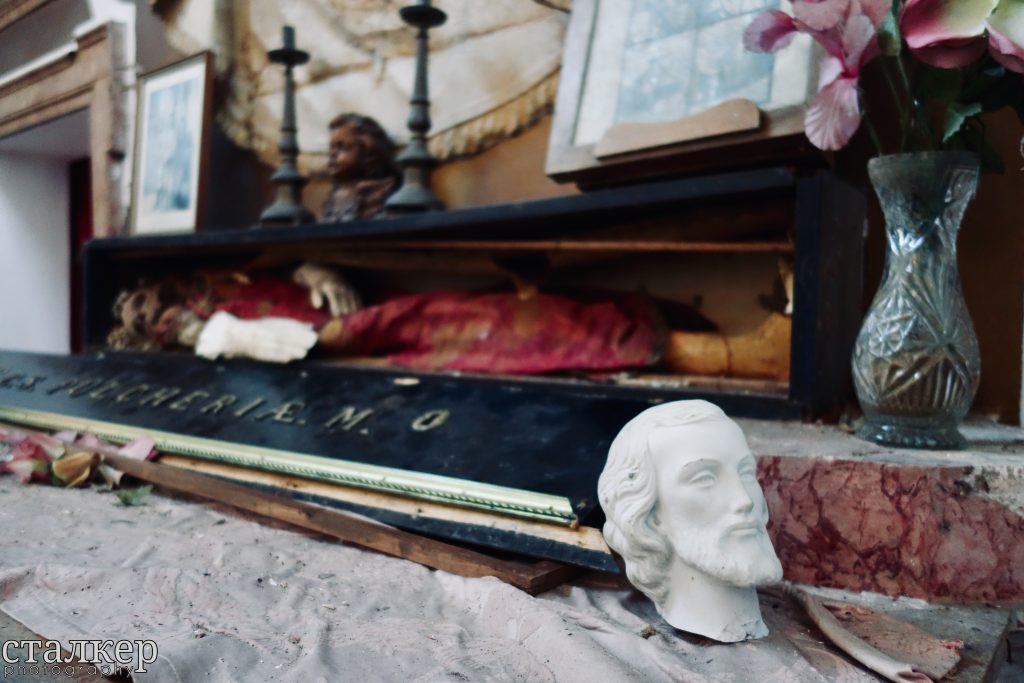 Late sunset,
we walk down the tree-lined avenue,
in search of the holy grail and the fairy oratory.

As if it were a meeting of Urbex, the Villa is crowded and assaulted by two different groups of explorers. The Villa, as if it were a model parade, shows itself in all its elegance. We all hurry to take photographs before the sunlight leaves us and the undead rise from the grave.

In the oratory, we still find the relics of Saint Pulcheria in good condition, although probably only half (or even less) belong to the empress. It was, in fact, customary to replace bones and skulls with others found in cemeteries or catacombs. 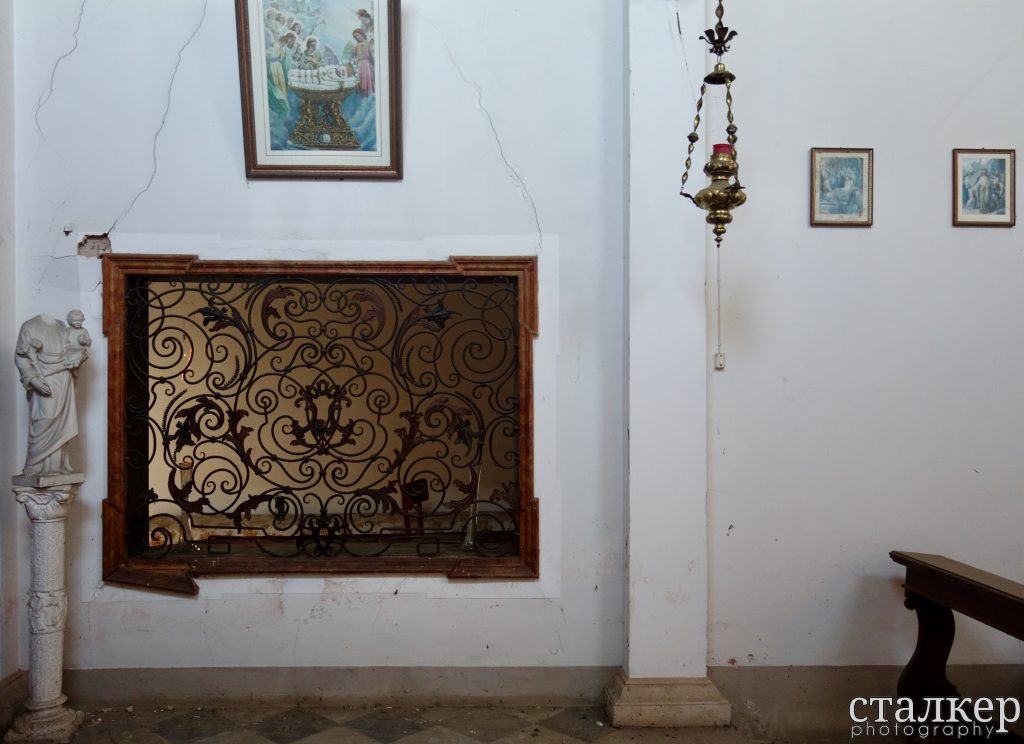 On the arrival of the second Urbex group, we have the opportunity to see an old exploration companion again, and to everyone’s surprise, we greet each other with great joy and exultation.

After the oratory, we head to the villa, where darkness has already taken over. It is our torches and cameras that bring light. The furniture and walls, almost under an allergic reaction, recede. Are we not welcome? Or are we not used to so many people at once?

“We must treat this place with delicacy,” I repeat to myself. 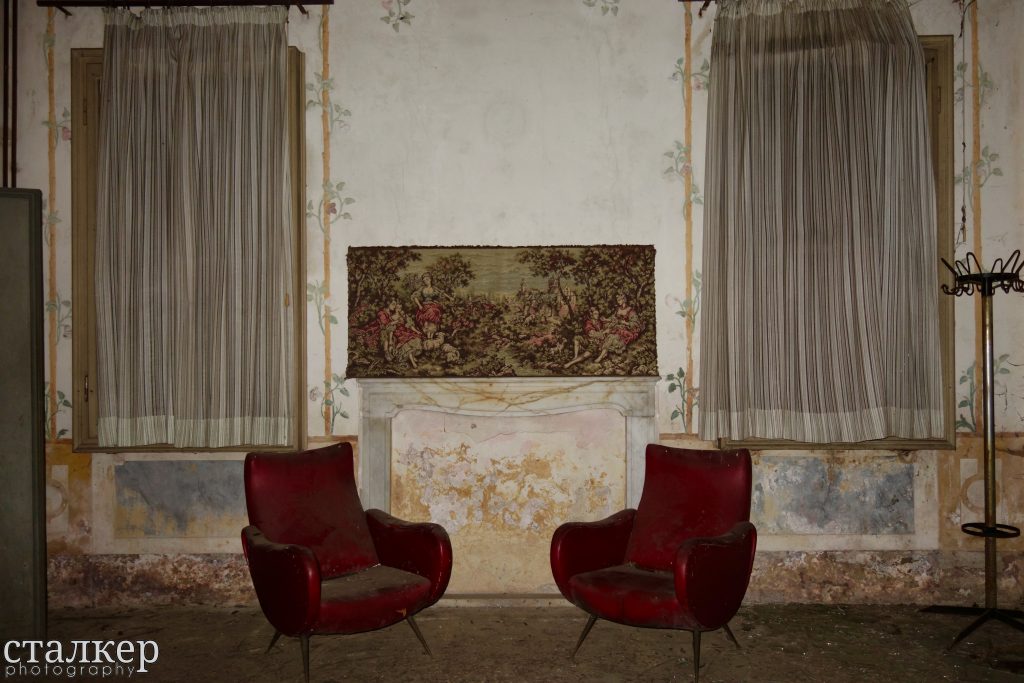 The furniture and furnishings are all still in good condition, even if covered with several inches of dust.
What remains of this Villa is a memory left by the Istituti Riuniti di Ricovero di Ricovero di Treviso. Everywhere there are beds for patients, saints, Madonnas and Jesus Christ various.

In the kitchen, we find embroidered napkins, teacups, and sugar spoons. In the wardrobes, there are clothes and pillowcases for the pillows, with beds and photographs all in order. Work of other Urbexer? Maybe.

In a room instead of a mirror above the sink there is a photo of Jesus Christ, just to make those who wash their faces in the morning feel like God. 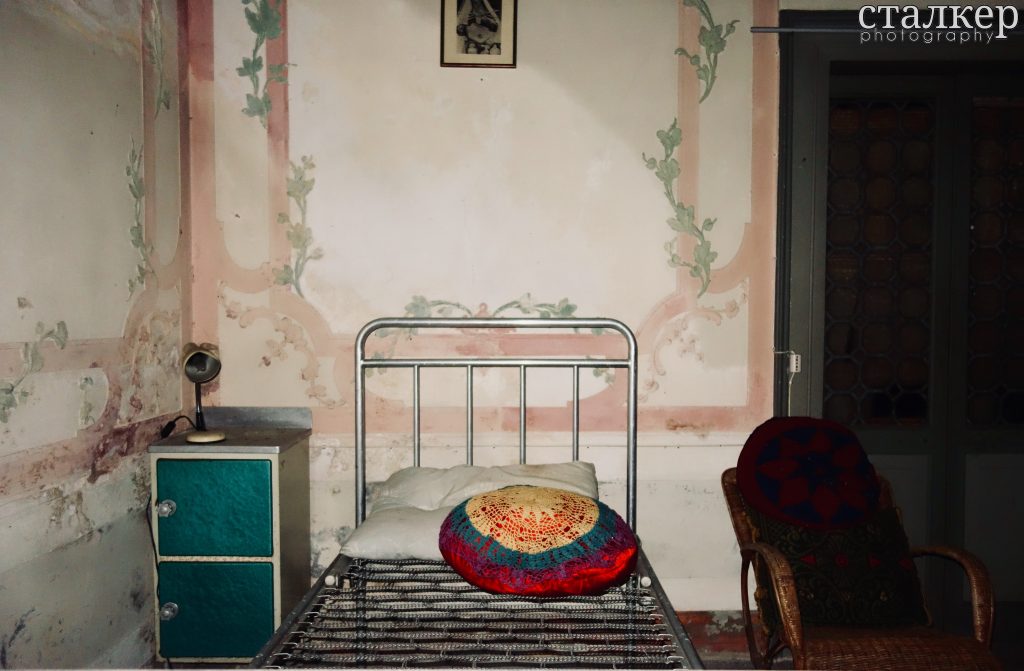 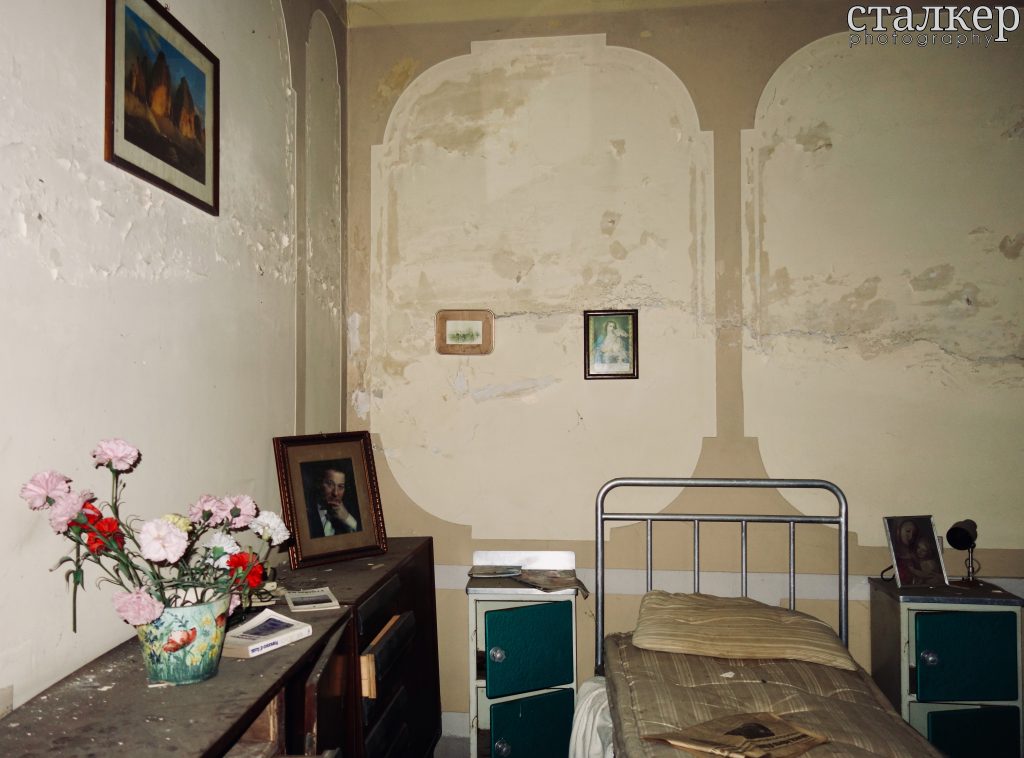 Vases with flowers are scattered throughout the building, and others stacked on the floor. To accompany the flowers are piles of books still in good condition.

About ten minutes after the advent of darkness, we decide to set off too, aware that we have started the New Year with a bang.