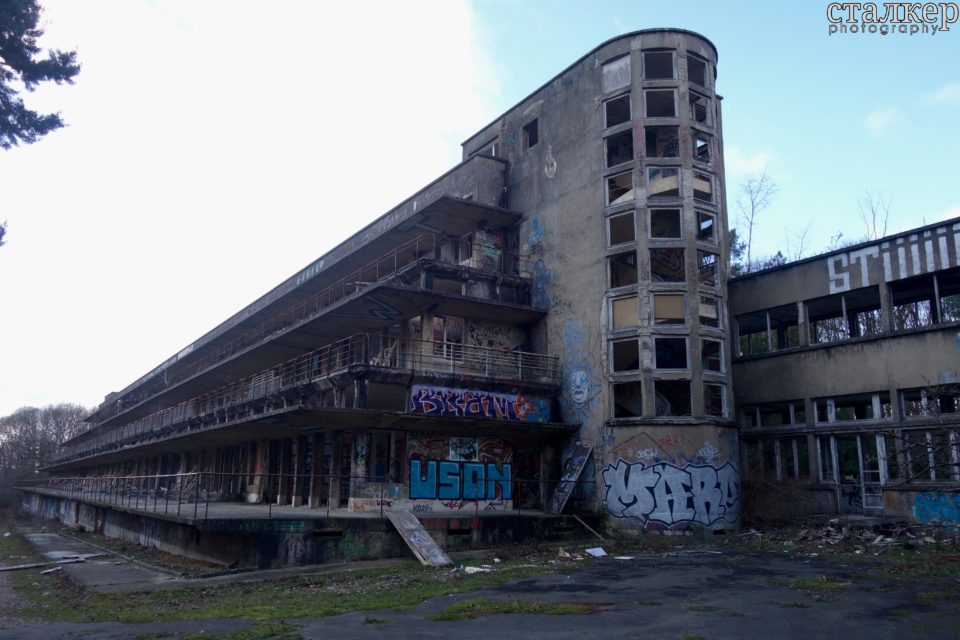 The sanatorium is located in Aincourt.
Aincourt is a French municipality located in the department of Val-d’Oise in the region of Île-de-France.
Access can easily be made through a gap in the network next to the main gate. 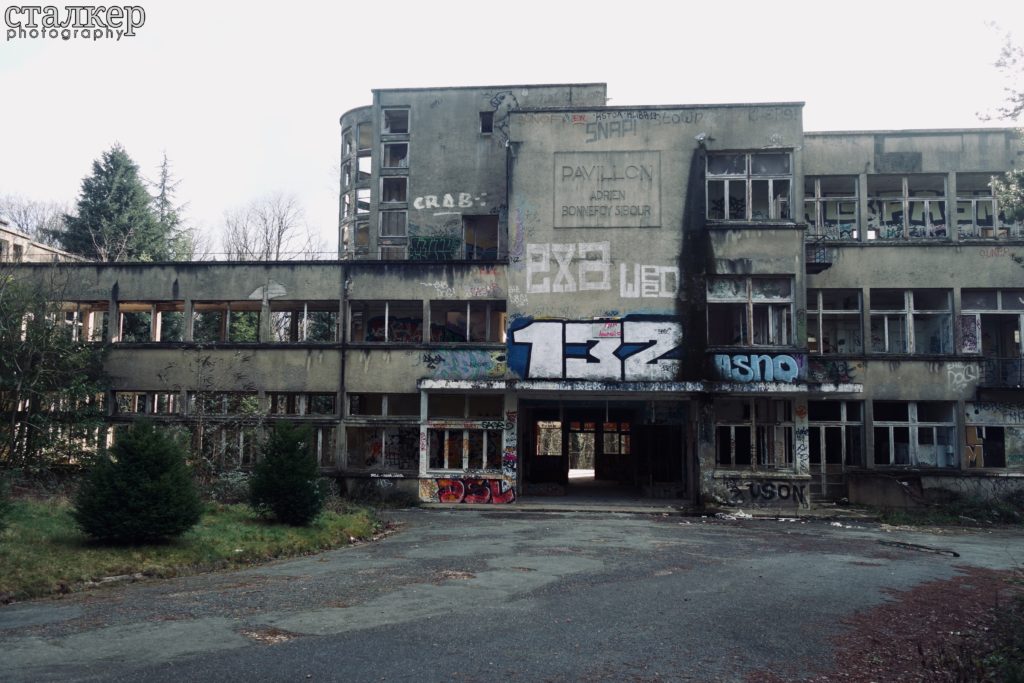 In 1929 there was a very serious epidemic of tuberculosis in France, which affected more than 700000 people and killed at least 10000. Even the urban centers of Paris were not safe.
In 1930, the General Council decided to open a “Maison de la Cure” (House of Curing) in the village of Aincourt. Fresh air, nature, hills, and countryside. It was the best one could wish for at that time for the treatment of TB.

The architects who completed the project were Edouard Crevel and Paul-Jean Decaux. Work began a year later, in 1931. Three pavilions were erected with adjoining terraces strategically oriented towards the south-east that allowed patients to enjoy maximum sunlight and breathe fresh air.
In order to avoid further epidemics, the three pavilions were built 400 meters apart. Each of them could hold up to 150 patients. The ‘Pavillon du Docteur-Vian‘ was intended for women, the ‘Pavillon Adrien-Bonnefoy-Sibour‘ for men, and the central pavilion ‘Pavillon des Enfants‘, as its name suggests, for children.

Completed in 1933, each pavilion consisted of three floors. The rooms were separated by a special glass to provide sunlight and maintain a certain degree of privacy. The ends of the building contained rounded stairwells in order to maximize sunlight again and look aesthetically pleasing. Although the concrete and plaster construction may appear somewhat brutalist in contemporary times, this style was quite popular in the 1920s. 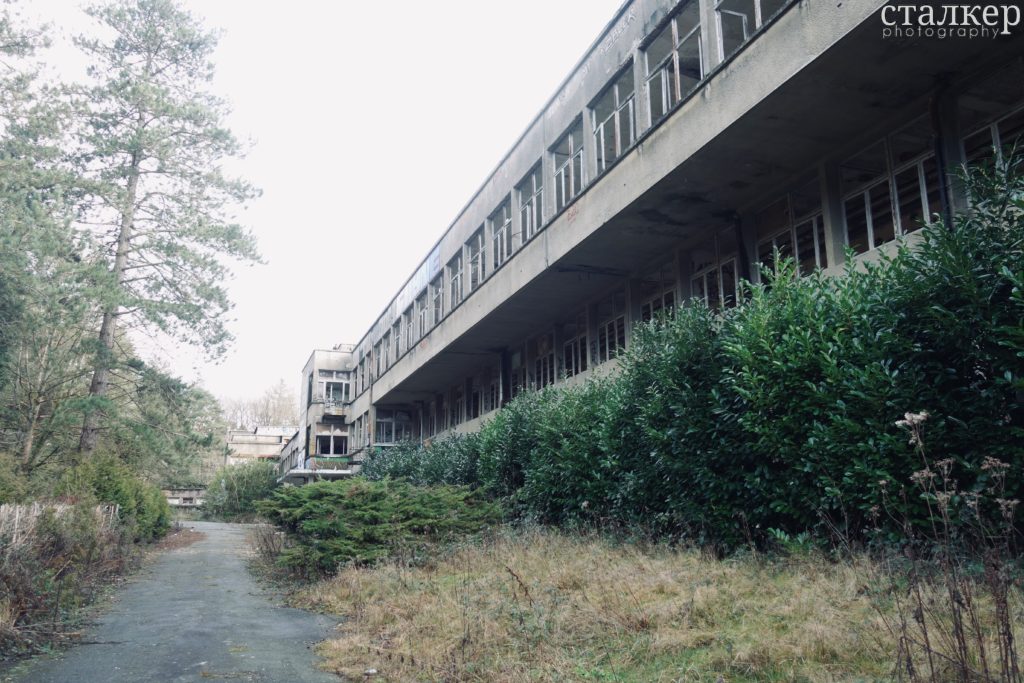 In addition to the three pavilions, there were laundries, schools, mortuaries, the residence of the staff and the administration. The entire campus was designed to recreate the alpine forest that was believed to have extraordinary healing powers at the time. Patients did not even need to reach the mountains as they had everything they needed on campus. Very special plants grew in the park, and sometimes the pavilions were renamed according to the various species (Tamarix, Poplar and Cedar). 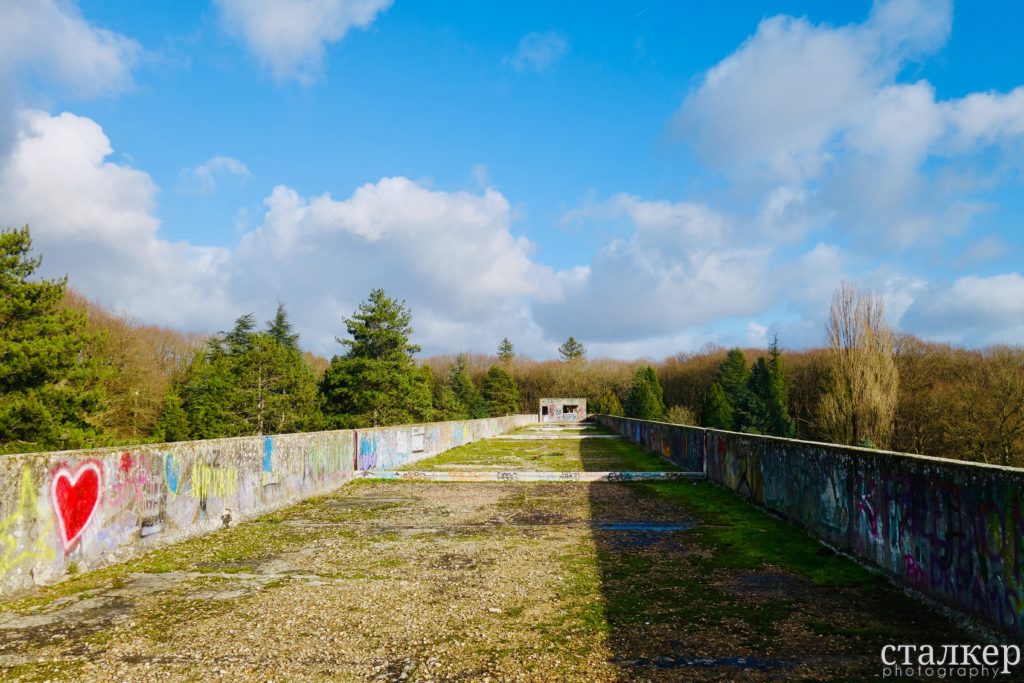 During the Nazi occupation in 40′ patients were relocated to other hospitals scattered throughout France and the campus became an internment camp. In May 1941, 667 prisoners were imprisoned, when at most 150 were supposed to be there. Hundreds of people were deported to concentration camps in Auschwitz, Buchenwald and Sachsenhausen and never returned. In 1994 a plaque was erected in honor of the fallen.

After the liberation of France in 46′ the hospital began to take care of tuberculosis patients again.
In 1970, after the advent of the vaccine, the patients began to decrease until the complete closure of the buildings in the 90s.
The buildings have been registered as historical monuments since February 1992.

Urban Exploration in an Abandoned Sanatorium

Arrival in this village in the middle of the French Regional Natural Park of Vexin in the early afternoon. As if nothing had happened, I go in first through the gash in the net, and then in the grass and wet soil. Slowly I catch a glimpse of the enormous structure in all its grandeur. What remains of it is just that the skeleton, the rotting carcass, where flies, insects and mice have managed to build their own dining room.

There are two types of human beings who come to visit this place, the urbexer and the softair. In fact, when I arrive, both are present. There are shootings going on from one corner of the rooms to the other, and the corridors look more like trenches. On the upper floors, they run like madmen in search of the enemy to be shot down. Heavy and sudden steps that make even the reinforced concrete tremble.

As if it were an apocalyptic scenario, in the basements I find myself catapulted into a set of pipes and electric cables. With every 10 steps, I arrive in a new room, and a new room introduces me to new creatures. Graffiti that animates and guide me. Creatures that scratch and bite, but it is still too early for them to awaken. We are day creatures, they are night creatures.

On the upper floors, I walk endless corridors covered in graffiti again along their entire length. Pandas, aliens, smoking monkeys, clowns, dementors. I get to know each and every one of them.

All of a sudden a space opens up, and here is the rehearsal room and the cinema. Plastic tarpaulins float in the air. Very pleasant if it weren’t for the noise that the rabble around us creates with every noise and jump. 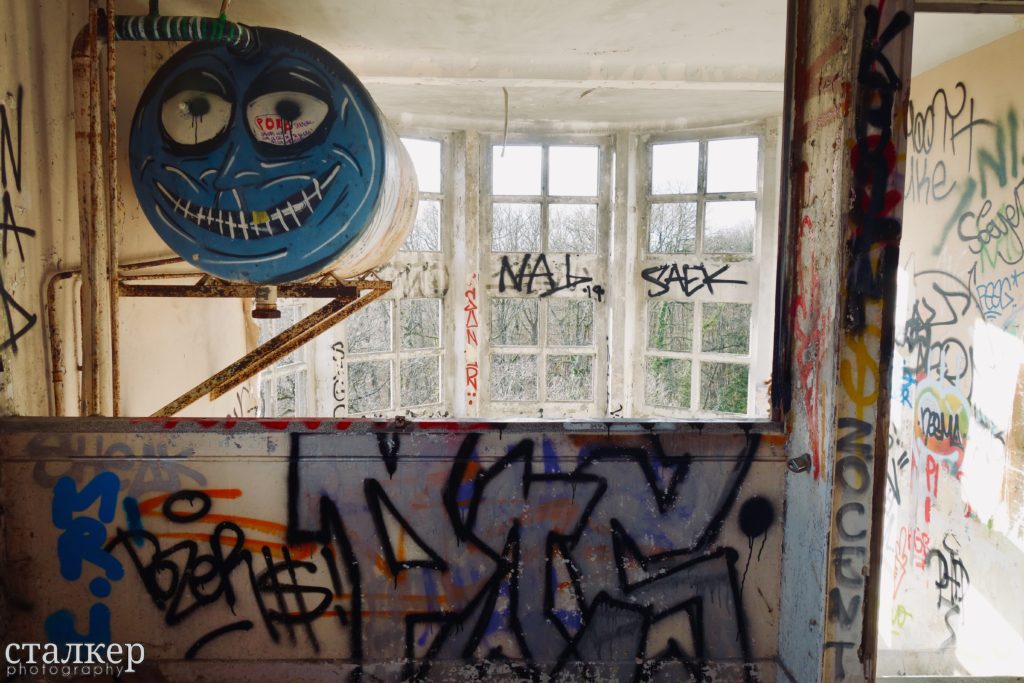 When I get to the top floor I have the pleasure of enjoying a breathtaking view. All around woods and countryside, and me above this pile of reinforced concrete, which was once an institution for the shelter of plague patients.