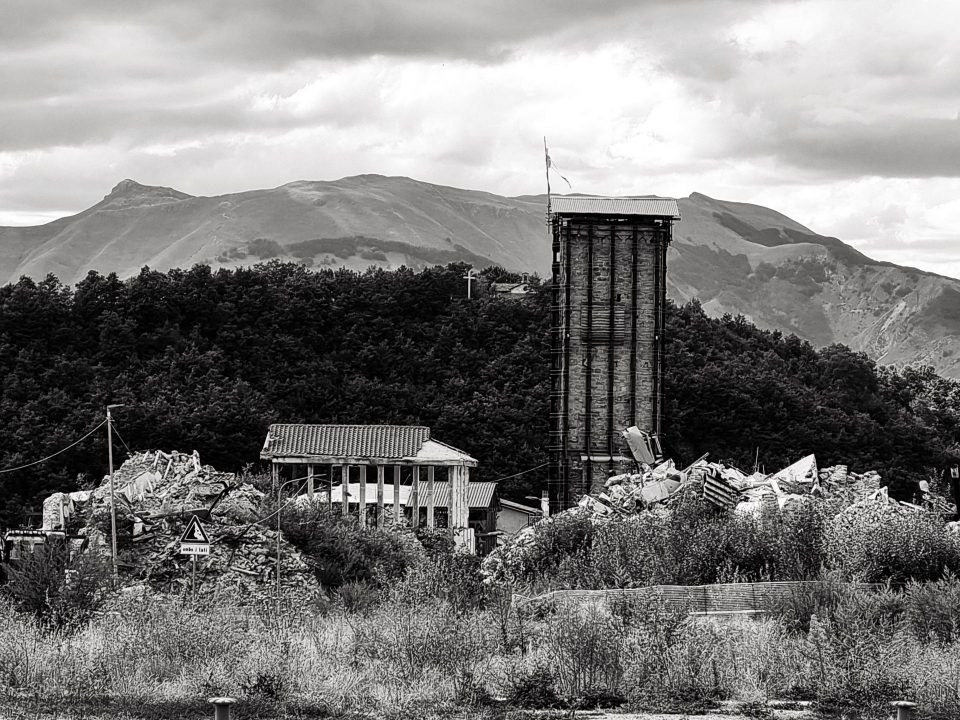 The earth opened, and as if it were a fiery mouth it began to regurgitate all its fury.

Since the 14th century, the city and the entire L’Aquila basin have always been subject to earthquakes of severe or medium intensity. In its history, two major earthquakes struck the area before 2009, with a periodicity of about 300 years.

The 2009 L’Aquila earthquake was a series of seismic events that began in December 2008 and ended in 2012, with epicentres in the entire area of the city, the L’Aquila basin and part of the province of L’Aquila (lower Aterno Valley, Monti della Laga and Monti dell’Alto Aterno). The name refers mainly to the main quake, which occurred on 6 April 2009 at 3:32 a.m. and had a moment magnitude (Mw) of 6.3 (5.8 or 5.9 on the local magnitude scale), with epicentre in the area between the hamlets of Roio Colle, Genzano di Sassa and Collefracido (locality of Colle Miruci in Roio), affecting much of Central Italy to varying degrees. At the end of the event, the final outcome was 309 victims, more than 1,600 injured and over 10 billion euro in estimated damage.

The collapse of the dome of the Anime Sante church and the destruction of the Prefecture building, which became the symbolic images of the event, as well as the collapse of an entire wing of the Casa dello Studente, were particularly significant.

Faced with this situation, the government launched both a subsidy for self-sufficiency for those who had lost their homes and an unemployment benefit for those who had lost their jobs. As a further countermeasure, the event led to a freeze on tax payments by residents in the affected area, as provided for in the government’s intervention and reconstruction plan and as has happened in the past for other Italian earthquakes. An attempt was then made to revive the local economy by relying as much as possible on local companies and cooperatives for the supply of materials and works useful for reconstruction. Help also came from the international community and many Italian companies.

On 24 August 2016, Amatrice was devastated by an earthquake measuring 6.0 on the Richter scale, which occurred at 3:36 am in the Rieti area with its epicentre in nearby Accumoli; it was Amatrice itself that paid the highest toll of human lives to the event: of the 300 total victims, 235 died in its territory, which saw most of its public and private buildings destroyed.

On 18 January 2017, a series of four new tremors with epicentre in the nearby municipalities of Montereale, Capitignano and Pizzoli hit the municipality, causing new collapses to structures already damaged by previous earthquakes and knocking down what remained of the bell tower of the church of Sant’Agostino.

Many thanks to Andrea Magon (©https://www.facebook.com/andrea.magon) for the photos.