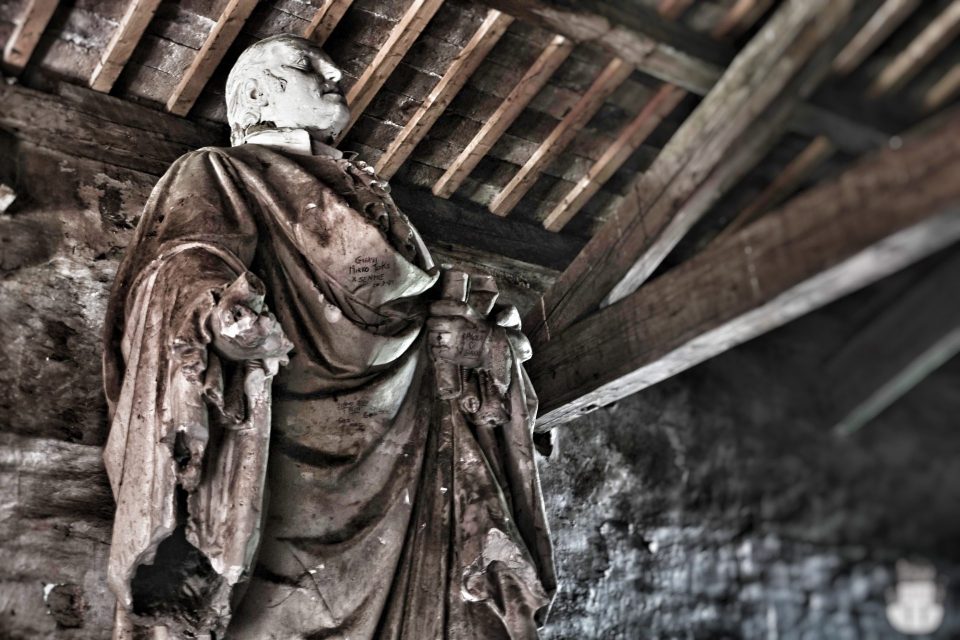 In the Veronese countryside rests an open-air art gallery, a splendid historic building from the 16th century.

Villa Moneta stands in the municipality of Belfiore, in the midst of fields and expanses of vineyards and fruit trees. The building is easily accessible. 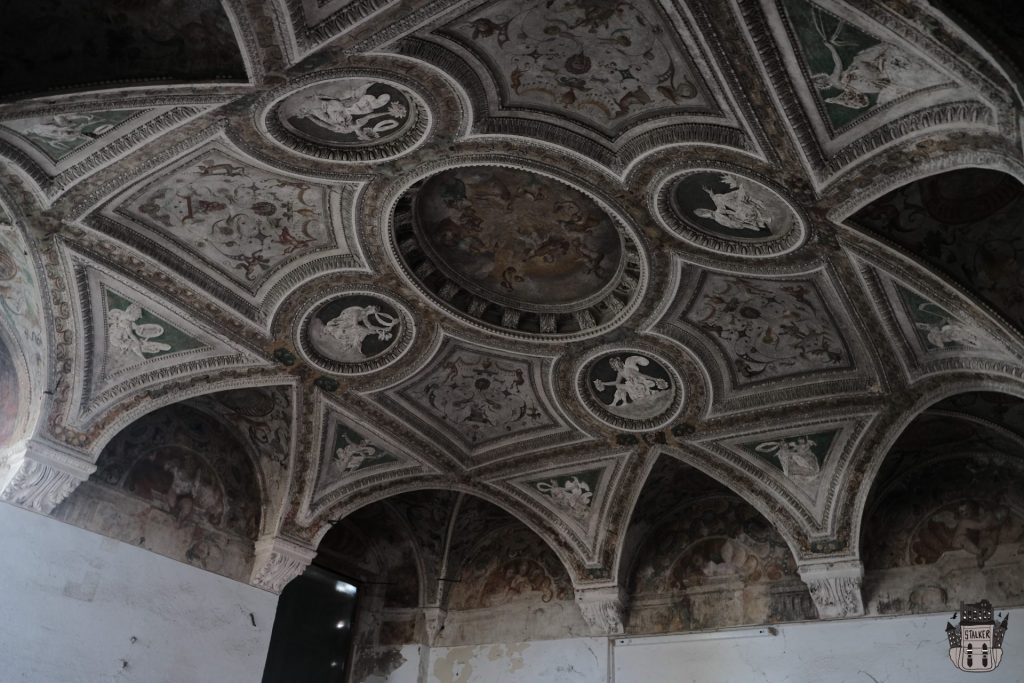 The complex stands alone on what was originally a property of the Verità family, which later passed to the Moneta family. In 1557 the banker Cosimo Moneta, who inherited the property, started work on the construction of the villa, which was completed in 1563, the date engraved on the sundial on the south side of the building. This date also marks the end of work on the interior decoration of the villa, as Bartolomeo Ridolfi, who did the stucco work, left for Poland in that year. During the period in which it was owned by Cosimo Moneta (who died in 1566), the villa was the scene of parties and amusements, and its fame reached as far as Giorgio Vasari, who in his Lives, speaking of the sculptor Bartolomeo Ridolfi and his work, mentions Cosimo’s residence, describing it as a “beautiful villa”. 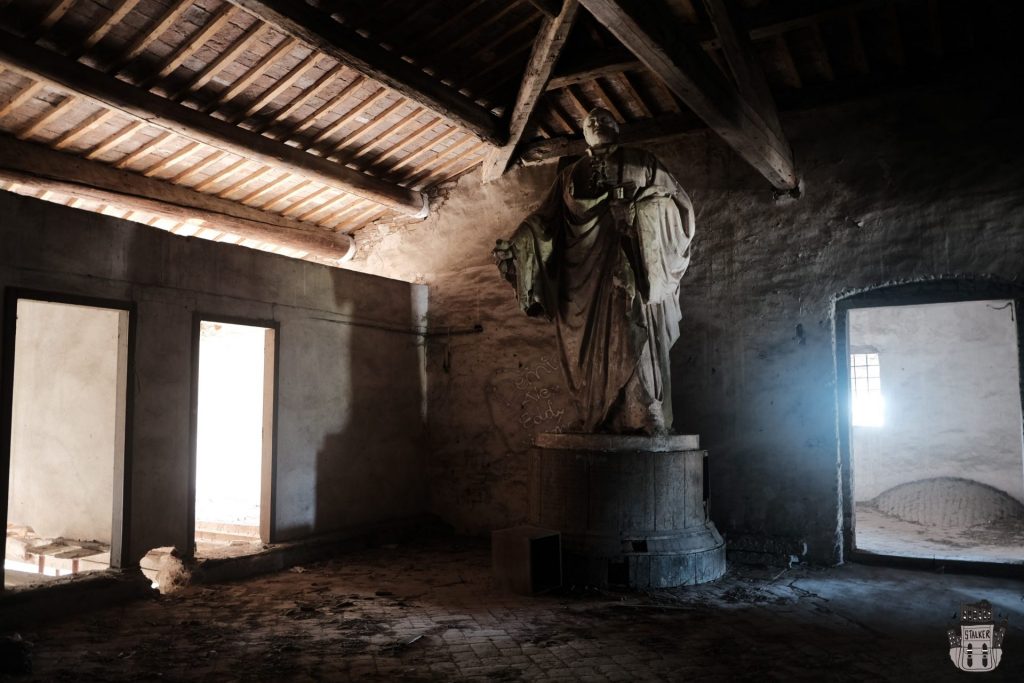 As early as 1577, however, the villa became part of the property of Federico and Antonio Maria Serego, sold by Cosimo Moneta’s sons, burdened by their father’s unpaid debts. This change of ownership, however, caused an internal clash within the Serego family, since Federico and Antonio Maria’s cousin Marcantonio had already been negotiating for several years with the Moneta brothers for the purchase of the villa in Belfiore, in the vicinity of which he had already begun to purchase land, intending to make the villa the centre of his agricultural holdings in the area. 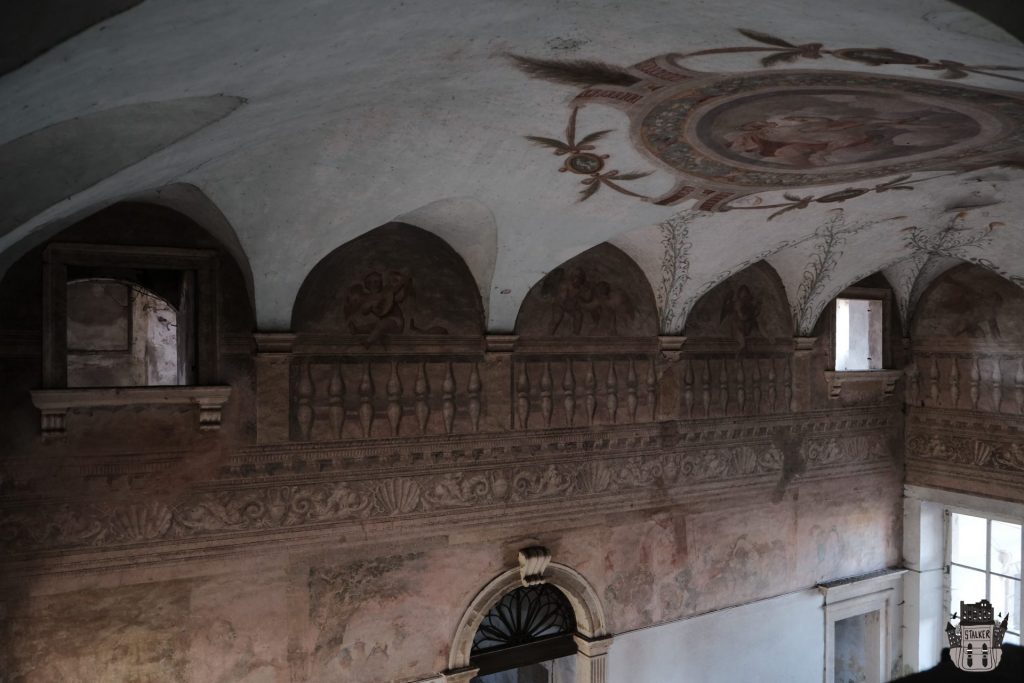 The Serego brothers had managed to obtain ownership of the complex through subterfuge and cunning, prompting their cousin to ask them for compensation for the failure to purchase the estate. The matter was only resolved in 1579 when Federico and Antonio Maria undertook to pay 2750 ducats in compensation to their cousin Marcantonio. Because of the long family dispute, the first evidence of the Serego family’s presence in the villa at Belfiore is a letter dated 1587, in which it appears that the villa was inhabited by Alberto Serego, Federico’s son. Despite this, possession of Villa Moneta must have been a source of pride for the Serego family even earlier, if the frescoes discovered in 1968 at Corte Ricca di Beccacivetta in Albaredo d’Adige, an ancient Serego property, depict a building with a serliana that looks very similar to the palace at Belfiore.

The Serego family made the villa the centre of an important farm, and it is probably to them that we owe the construction of the two enormous barchesse, a 17th-century work.

In 1966 the frescoes were restored by the Superintendence for Environmental and Architectural Heritage of Verona. In 1966-67, 22 frescoes were removed from the rooms on the ground floor and confiscated in 1982. In 1991, the Gip ordered the release of the frescoes from seizure with the obligation of relocating them to Villa Moneta, which never took place.

Today the villa, after an attempt at restoration in the early 2000s, lies in a state of serious disrepair: the window frames have been removed and the stucco and fresco decorations are suffering from serious conservation problems. One of the two barchesse (outhouses), however, has been recovered and divided into dwellings. 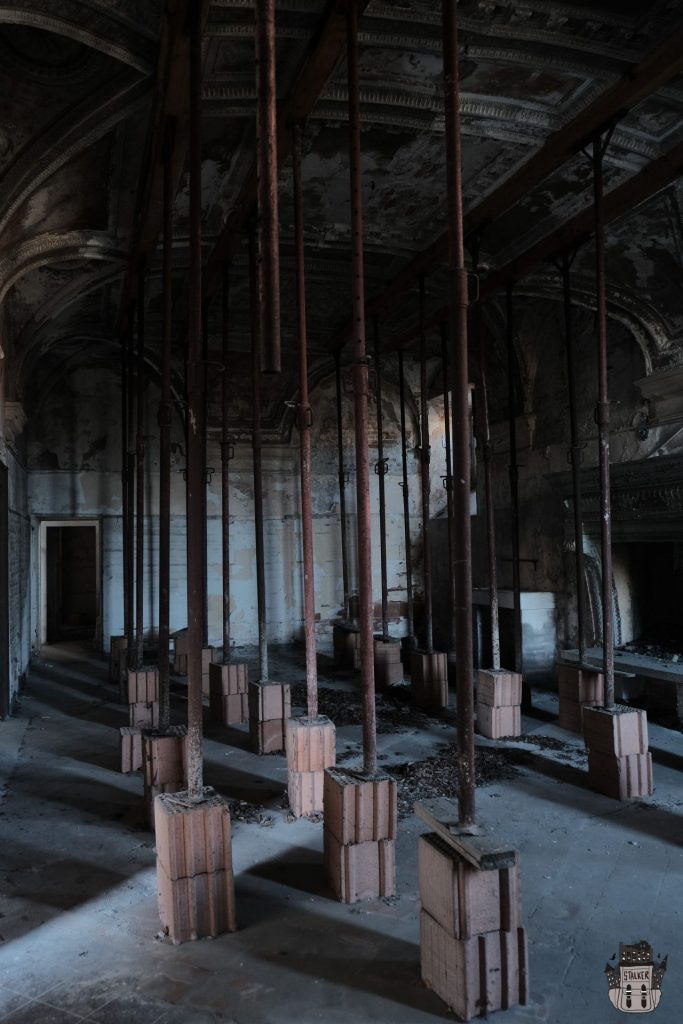 Palazzo Moneta has an external appearance more reminiscent of a city palace than a country villa: the building is a compact cubic structure, consisting of three floors, the ground floor of which has ashlar work that particularly highlights the access portals of the symmetrical north and south facades.

Inside, there is a rich decoration from the time of the construction of the villa, consisting of frescoes and stucco work by famous artists such as Paolo Farinati, Falconetto and Bartolomeo Ridolfi.

On the ground floor in the vestibules there are decorations with plant motifs; in an oculus in the centre of the room the ‘Rape of Europe‘ was visible.

In the double-height central hall, in the centre of the vault there is a shapely female figure, perhaps Jo loved by Jupiter. On the sides of the frame of the figure hang images of other divinities: Diana, Venus, Juno, and perhaps Cupid with Psyche.

Along the side walls, enclosed in lunettes, are numerous angels playing musical instruments sitting on the false balustrade surrounding the hall. On the main walls are two large battle and triumph scenes by Farinati, whose signature came to light during the restoration of 1800, as well as the snail motif, the painter’s signature.

From the central hall, through a corridor with a vaulted ceiling frescoed with a vine pergola and another with grotesque decorations, we enter the room “of the four seasons“. The stucco decorations attributed to Bartolomeo Ridolfi are remarkable.

Ridolfi, a talented 16th-century stucco artist, was introduced to the Monetas by Paolo Farinati, whose brother-in-law he was. The four stucco medallions depict the seasons and the grotesque representations in the panels show a vigorous popular culture, with real life representations, unusual for this type of decoration. 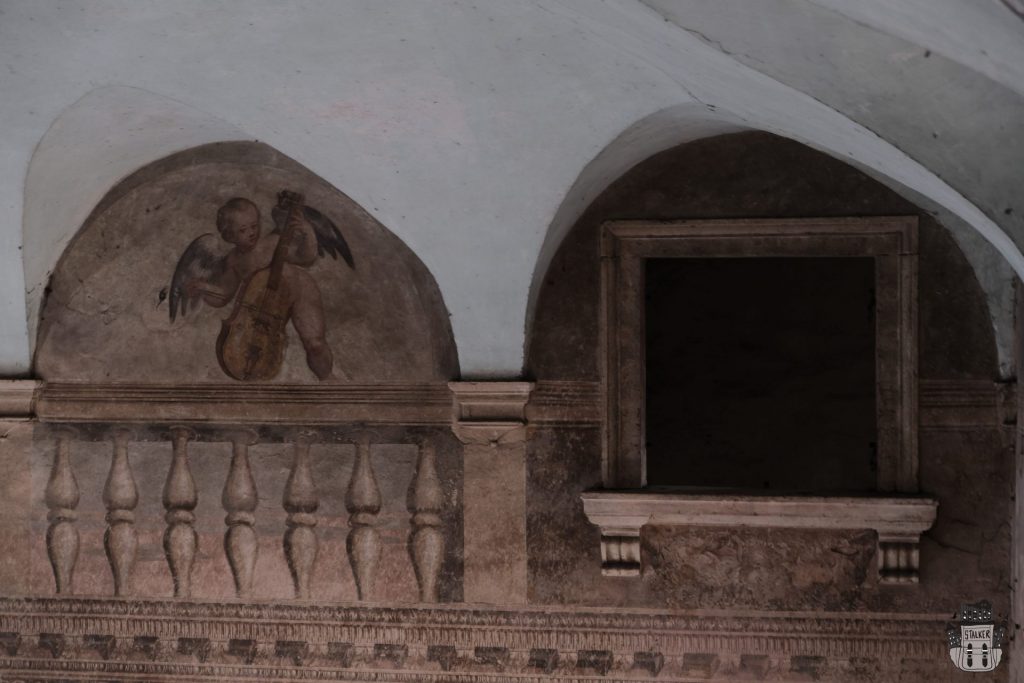 In the oval in the centre of the ceiling we see Apollo and the muses in the clouds, and all around in triangular frames are other Olympian divinities: Diana, Mars, Mercury, Jupiter, Saturn, Juno and again Apollo driving the sun chariot.

On the first floor, the room of the ‘illicit loves’ is famous for the theme of the representations: Venus and Mars in front of the alcove while Apollo warns Vulcan, the legend of Priam and Thisbe, two other lovers making love in the waters of a small lake. 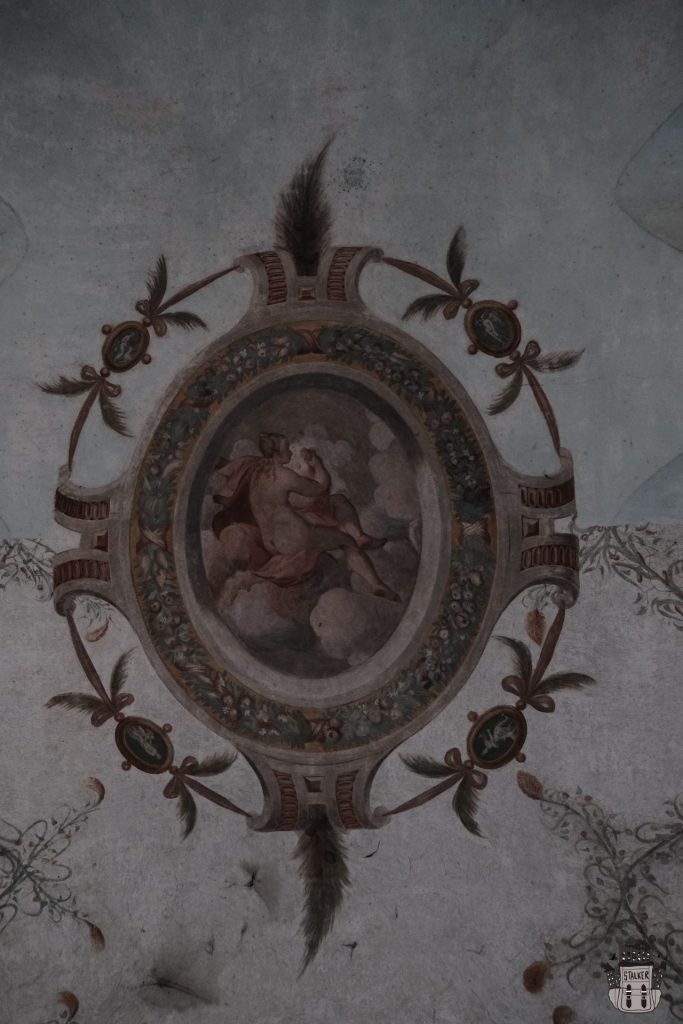 It is precisely from the legend of Priam and Thisbe depicted in Palazzo Moneta that some authors claim Shakespeare’s inspiration for his “Romeo and Juliet“: the tragic love story between the Babylonian lovers, later reported by Ovid, and then by Matteo Bandello, was probably reinterpreted by the English bard who drew the idea for the drama of the Veronese lovers.

In the palace, an original architectural detail is the “scala dei mussi“, a helicoidal brick staircase that the beasts of burden used to climb to the granaries with their loads to store.