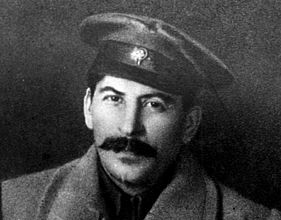 Be prepared because today we will be in the place where one of the worst dictator of all history was born!

Location and how to reach
Today we are in Gori(გორი). Gori is a city in eastern Georgia, which serves as the regional capital of Shida Kartli and the centre of the homonymous administrative district. Walk all along Stalin street, cross the bridge and, down on the left, you will see the abandoned train station. It’s exactly behind the real one.
History
One girl told me it was used before till 70-s. Then it was replaced by the new one. I didn’t succeed while trying to know more about it from locals as my knowledge of Georgian language was not good enough ahaha.

Description
From the up of the bridge my hawk eyes into abandoned places could catch some wagons immersed in the vegetation. Some stairs leaded me till the steep road, the “entrance” (I could say) of this former train station. Before of take the first step into the weed I decided to have a look on the big store building which was close to there.
The building from far away seemed abandoned but it wasn’t, in fact I heard some sounds coming from inside.

Except this, everything all around was calm. Close to wagons there were some old people sitting, chatting lovingly. After I said hi to them and I checked that the situation was OK, I jumped up on the wagon.
It was really old and full of spider webs and garbage almost everywhere. Meanwhile my nose inhaled strong smell of rust made deeper when it was mixing with the hot weather of the day. On the other wagons the situation was all the same, nothing left inside and unfortunately no locomotive was there:/. 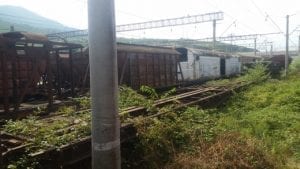 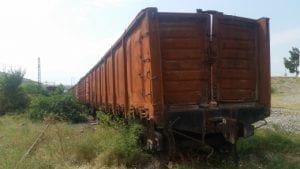 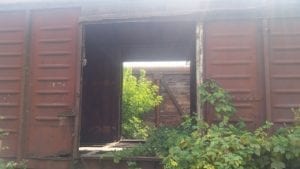 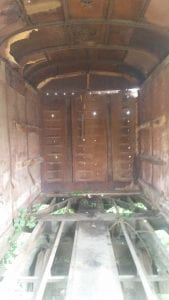