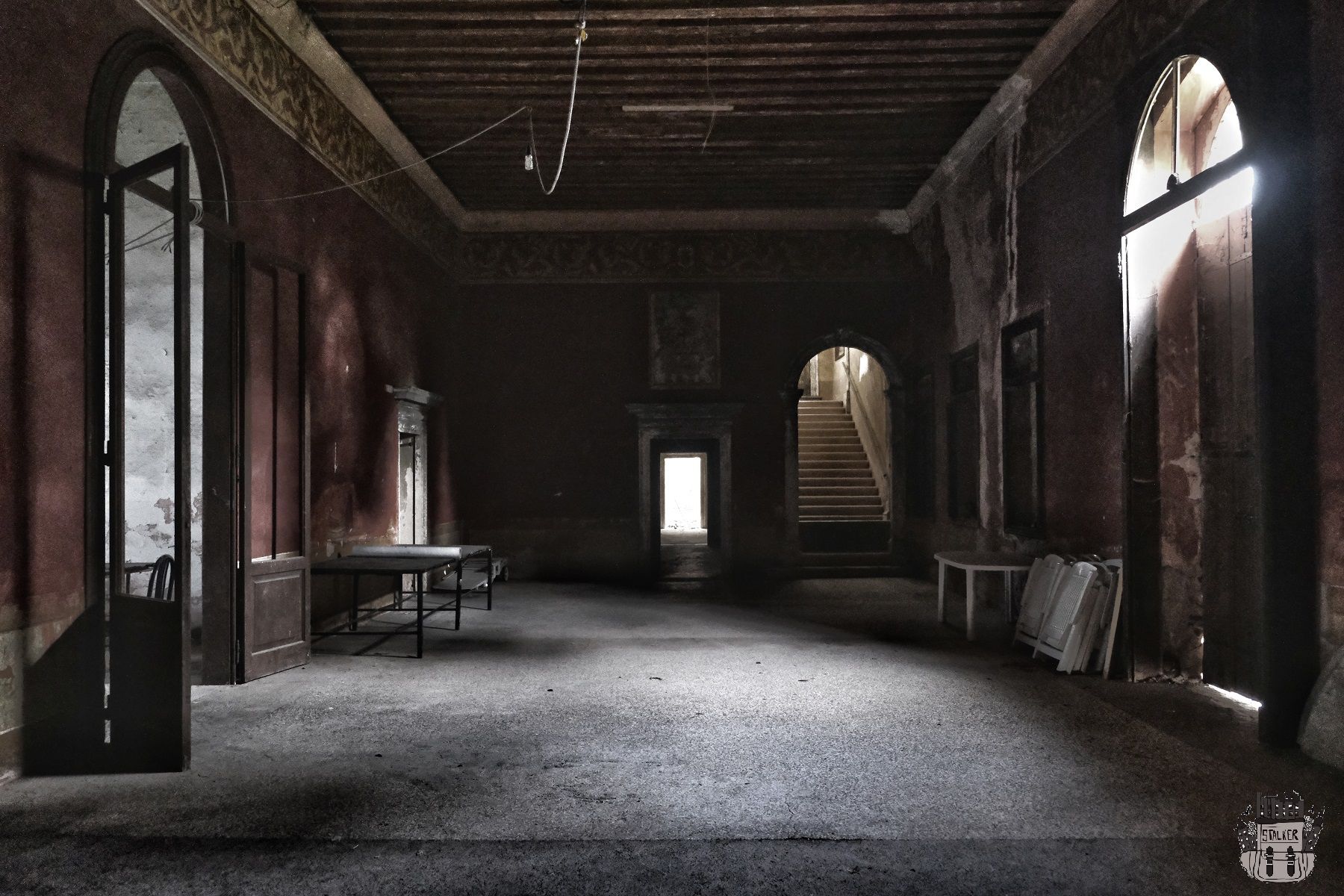 Villa Franzan and the Minor Seminary of the Diocese of Padua are located in Barcon, a locality to the north-west of the municipality of Sarcedo. In the 20th century, Barcon (a term meaning ‘large enclosure of fields’) defined the complex of the Venetian villa and seminary, currently in a state of neglect.

The Franzani (or Franzan) family, originally from Lake Como, moved to Thiene in the 16th century to make their fortune as cloth merchants (“merzari“). In time, they invested the money they earned in plots and surrounding land, acquiring the noble title of ‘Franzan’.

The villa is thought to have been built at the same time as the church of St. Anthony, 1666, if not earlier. Testifying to this is the declaration by Count Domenico Franzani that he owned in Sarcedo

“A piece of arable land, planted and irrigated with vines, situated in the above appurtenances in the Contrada of Barcon with a house on top of it, inhabited by me […], of one hundred and forty-five quarters of a field, one hundred and ninety-nine tables”.

In total in those years the count owned 395 fields in the municipality of Sarcedo alone.

The complex comprises a central body consisting of the noble villa where the Franzani family resided, the barchesse, followed by a long arched portico, the columbarium tower, the buildings to the south with the stables, barns and workers’ flats. To the north is the Oratory of St. Anthony and the kitchen garden. The entire rectangular plot, formed by the 57 fields, is surrounded by a boundary wall with two entrances to the west that encloses it along the four cardinal points.

According to Renato Cevese, an art critic and historian from Vicenza, the villa was designed by architect Antonio Pizzocaro.

The church of Sant’Antonio

There are a total of three religious buildings in the Barcon complex. The first faces the road and was the noble oratory dedicated to the Immaculate Conception of Mary and St Anthony of Padua. Inside we find the 17th-century altar, inlaid with marble, and a 19th-century altarpiece depicting St. Anthony to whom the Virgin appears. Positioned above the altar is a black marble slab engraved with the only remaining inscription of the Barcon complex:

“To God One and Trine – to the Immaculate Conception of the B. V. Mary and to the divine Anthony of Padua – Mr. Domenico the father and Cav. Angelo Franzani the son – of the Counts of Meduna – moved by devotion – having gained a fortune through their industriousness – posed – the year of the Lord 1666”.

This inscription not only tells us the date of the oratory and the presence of an important figure such as Cavalier Angelo, son of Domenico, a graduate in Philosophy and Law, but also confirms the wealth acquired by the Franzani family who became counts in 1661.

The archpriest of Sarcedo describes the oratory in these words:

“consta di legiadrissima architettura; ornato di statues sopra al frontespiccio con un bellissimo altare et antepetto di pietre macchiate et frà varijssimi intagli et quello che fa al caso meo con le fenestre et meze lune politissimamente vedriate con l’altare portatile sacro con tre nuove et belle tovaglie, croce, et candilieri d’ottone nuovi et Secreta. The Sacristy with its pew with five vestments with new gowns; a chalice not very large but gilded and beautiful; a beautiful missal, and one for the dead with signs; and other ornaments in the sacristy as well as in the Church. The vestments are made of silk and of five colours, that is white, red, green, purple and black with its accompanying bags and veils, corporal and purifying and white cord. There is a zenochiatory with a table for the preparation for the Mass, which I have found to be of advantage in order to be admitted to the service to be celebrated there; and this I testify with my oath, thus being the truth’.

Another place of worship was the private chapel located on the main floor of the villa, while the last and least interesting from an artistic point of view is another chapel built in the second half of the 20th century to accommodate a large number of worshippers at the seminary.

Mass was compulsory in this oratory as it was particularly far from the parish church of Sarcedo, commissioned by Abbot Don Girolamo Franzani, Domenico’s nephew, as per his will. Subsequently, the Pia Opera di Carità of Vicenza inherited the patrimony of don Girolamo.

The English ladies of Vicenza

From 1818 the villa followed a succession of changes of ownership after the last Franzani decided to sell the entire complex.

In 1877, English ladies from Vicenza bought the property. The latter are welcomed with great enthusiasm by the local population, and the following flyer is printed for the occasion:

THE OPENING OF THE COLLEGE/

ABANDONED TO THE DESECRATION OF TIME/

HERE THE FLOWER OF YOUNG MAIDENS/

THE AUSPICIOUS DAY WILL BE MARKED/

NOT TO PERISH IN MEMORY/’

With the help and advice of Sister Teresa Surlera, the new owners began massive reconstruction work to turn the villa into a summer resort and educational boarding school. Headmaster for some at the school was the poet and translator Giacomo Zanella.

The work required a great deal of financial outlay, but brought the building back to its original splendour: the external walls and the kitchen garden were rebuilt, and the palace was completely restored and adorned with statues, decorations and obelisks.

The Diocese of Padua

Thirty years later, the complex passed under the ownership of the Diocese of Padua, when the Bishop of Padua, Monsignor Luigi Pellizzo, decided to look for a new seat for the Bishop’s College right inside the Barcon. Negotiations with the Dames began in 1907 to extend the building and make some changes to adapt it to the new functions of the college. The building was purchased on 9 December 1907, for a sum of £150,000. In 1913 the 25th anniversary of the foundation of the college was celebrated, attended by important figures and the clergy of Thiene. At that time, the boarding school was considered one of the most ‘comfortable and hygienic’ institutes in the area, with 252 boarders and 10 externals.

The Barcon and its modifications

In order to arrive at the present Barcon (i.e. the entire complex of buildings constructed in the 20th century) some spaces had to be adapted to the boarding school first, and then to the seminary. The rustic adjacencies were demolished and the interior of the building altered.

Many of the interventions completely change the appearance and structure of the buildings according to the needs of the religious institute, and the complex loses much of its former prestige. The stately palace is used for administrative-representative functions, the ground floor houses the rector’s and visitors’ rooms, the kitchens and the porter’s lodge.

What was known as the main floor is now reserved for administration and accommodation. The long building that continues in line with the villa serves various functions: refectory and chapel on the ground floor, cloakroom on the first and accommodation for professors on the second.

During the First World War, the complex served as a rear post, a line of resistance, a materials depot, the direction of military operations and the reception of the wounded, becoming a military hospital in May 1916, with the subsequent transfer of the college to Padua.

In 1920, at the end of the war, the Bishop’s College once again became operational, expanding its functions with the addition of a minor seminary (up to the 5th grade) with the aim of educating the future priests of the Diocese of Padua.

During the Second World War, part of the complex was occupied by the Germans and used as a machine shop for repairing cannons, while still maintaining some of the seminary’s activities. Germans, priests and seminarians found themselves sharing the spaces of the Barcon in a balanced situation.

In 1944, after the bombing of Padua, the major seminary was transferred to Thiene and half the clerics took lodgings at the Barcon in an overcrowded situation.

On the outside of the buildings and in the courtyards the Germans installed cannons and machine guns to keep air traffic and the area near the mountains under control.

Once the war was over, the Minor Seminary returned to normal. In 1968 the community consisted of 230 seminarians in the three middle classes, 17 priests, a group of clerics and 7 nuns of St. Joseph Benedict Cottolengo. For the school year 1969-1970 the seminary was transferred to Palazzo Cornaggia in Thiene, the former seat of the bishop’s college, and the new site in Tencarola was opened.

On 14 December 1971 the Bishop’s College sold the entire complex to private individuals, and in 1992 the part of the Barcon without any historical or artistic value was purchased by a real estate company. Unfortunately, the latter area was soon abandoned as some of the company’s business ideas were not realised.