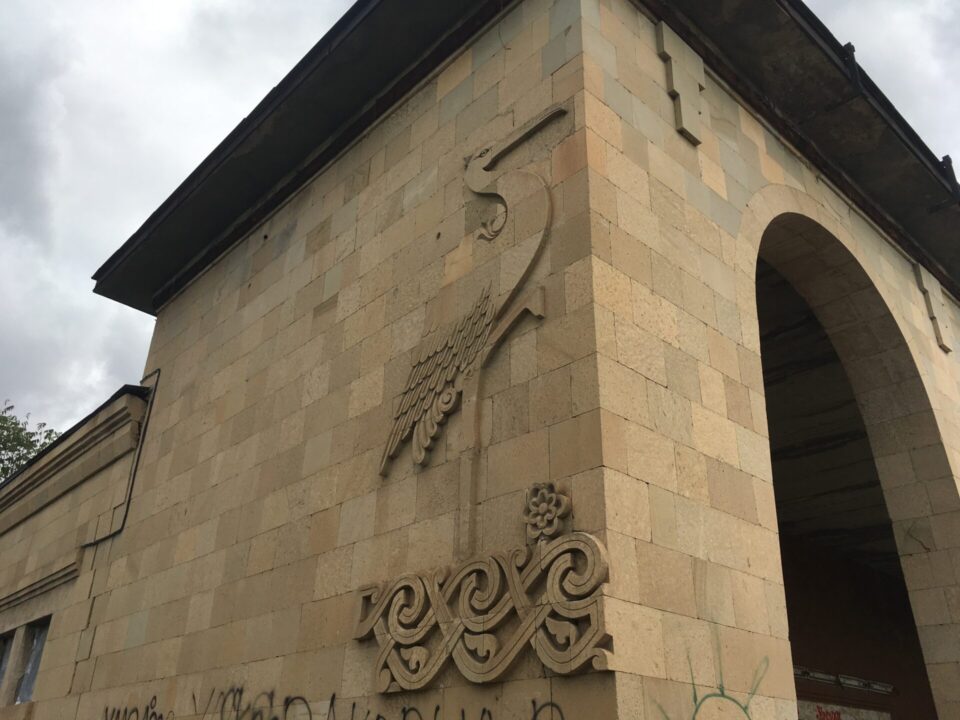 Could you imagine yourself at eating harissa or khash in one of the best restaurants in Yerevan and overlooked by Mother of Armenia from above of her 51 meters of height. Well till 30 years ago was possible…

Today we are in Yerevan, the capital of Armenia. The site is situated in Victory park and it is still pointed in Google maps as an Aragil restaurant. In order to reach it you need just to enter through the main entrance of the park (Azatutyan Ave), turn right and then always go straight on. After you pass the spring, go straight on circa 150 meters, and on the right in the middle of the vegetation you can find this abandoned restaurant.

Erevan park “Pobeda” (“Victory”) was opened in 1930, and was the biggest park in Armenia. The two main attractions of this park were artificial lake “Arevik” and the best restaurant in the city, called “Aragil” (built in 1964). For a long time it was the main symbol of the city, it was a must for foreign visitors to eat at this place, locals came here to show their belonging to the higher strata of society.

It was a little bit hard to get here: too far away, but the view from here was just magnificent…As well you could find here several attractions, eateries, cafes and a volleyball court.

There is no information in Internet how it happened that such a glorious restaurant, the symbol of the city, was closed. Though some locals told us that restaurant was shut down after the collapse of the Soviet Union. During the time of Privatisation, one millionaire bought this restaurant, and as long as among with it he bought some others restaurants, he wan’t able to pay enough attention for everything….and restaurant was left abandoned.

Some stairs will guide you till the landing where you will be welcomed by a stork (the bird, which by the legend is bringing children to parents). Stork is the symbol of this restaurant, as well as it’s name.
On the right there is a spacious terrace from where you can enjoy a beautiful view of Yerevan. On the left – a lot of places where people could drink and eat under the shadow of a roof.

Free and easy entrances are everywhere but personally I preferred the main one just few meters after the arches.

Inside, on the ground floor, nothing is left, except dust and debris of some machines. Down on the minus floor all was dark. Enlightened by small windows only the side where previously presumably there was the kitchen.

Small store rooms closed by iron doors, iron tools scattered on the floor and an iron washbasin in the middle of the room…
Some underground corridors links several rooms and, inside one of them, books and documents are left on the floor. A kind of pallet – probably home for homeless before, constructed by different layers of blankets superimposed- was hiding on the corner. On the opposite side – another room full of objects and tools: mirror (time for a mirror selfie ahaha), balance, oven, plastic and iron small stuff, a chair, some cups and a cattle.
Walking was wondering how this place could be years ago one of the best restaurants in Armenia, imagining people running from one point to another to cook or to serve costumers…

Suddenly on the other room, close to me, something was in movement. Came inside and…. Swinging up and down, left and right, there was a chandelier, this time not there to enlight but to rest; rest enjoying its last moments under the sunrays…