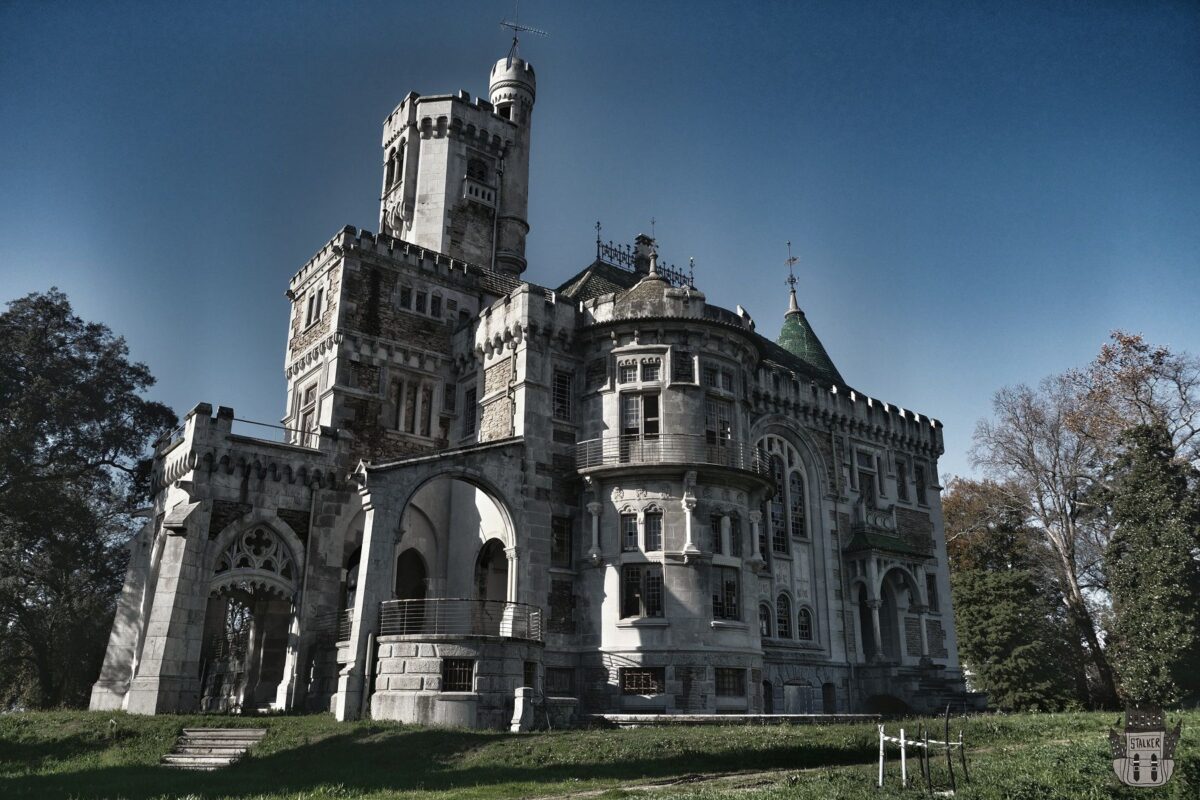 It is a palace with eclectic features in the Romantic style, designed by Swiss architect Ernesto Korrodi. It was classified as an asset of public interest by the Ordinance of 20 February 1985.

Francisco Peixoto de Sousa, born in the Braga parish of Merelim, made his fortune in Brazil through the coffee trade. When he died in 1913, he left his heredity to his daughter Francisca Peixoto de Sousa (Dona Chica), still in her teens. The daughter, born in Brazil, soon moved to Portugal and married João José Ferreira Rego.

The construction of the Castelo da Dona Chica began in 1915 on the initiative of Francisca Peixoto Rego. The name of the palace is derived from the patroness’ name, as Chica is the diminutive form of Francisca. Work stopped in 1919, when Francisca divorced her husband. In the following years, the owner changed hands several times and the work dragged on for decades, ending in 1991.

Currently, the property is in a state of neglect and decay, having faced a legal dispute over its ownership involving several entities.

Dona Chica does not confine herself to the conservative environment of the Portuguese countryside and soon starts squandering money on parties, luxury and the construction of the palace of her dreams for the sole purpose of hosting grand parties and her guests.

Dona Chica spends all her inheritance to build this magnificent palace but never lives in it. After being widowed twice and having a son, Francisca returns to Brazil where she remarries and stays until her death in 1960. Before leaving for Brazil, Dona Chica is said to have cursed the palace: “Come, Castelo, you will never be finished or inhabited!”

After being purchased by the Palmeira Parish Council in 1990 for around 95,000 euros, the local authority leases it to a tourism company, IPALTUR. The latter, in turn, made improvements, building a leisure area with a bar, discotheque, restaurant and meeting and conference rooms.

With the ‘consent’ of the local authority, IPALTUR mortgages the property for EUR 750,000 to the Caixa Geral de Depósitos. According to the agreement, the municipality would not receive any rent for ten years.

In 1994, IPALTUR went bankrupt and the property was sold in 1998 at public auction to Caixa Geral de Depósitos. The financial institution managed to recover part of its credit, while the other creditors, about 20 of them, had to go to court to get their money back.

In 2001, the Braga court ruled that CGD had to pay EUR 2,250,000 to the other creditors for the improvement works carried out by the bankrupt IPALTUR in the building. This decision, in November 2002, was annulled by the Court of Appeal of Guimarães, which was then confirmed by the Supreme Court of Justice in June 2003.

The property was purchased in 2010 by a real estate developer and resold in 2019.

The building, which measures 84 feet long and 122 feet wide, is mostly made of granite. It stands four storeys high and is characterised by a wide variety of materials and languages and mixes popular and erudite references in an extravagant eclecticism in which Art Nouveau, Renaissance, Romanesque, neo-Gothic, neo-Arabian and ‘rustic‘ styles of neo-Romantic architecture are blended.

Isolated, the volumes have their own image and establish a connection through materials and decorative elements. The windows are made of wood or iron, or even both. Iron is also used for the railing, the crowning of the roof and the windmill. One can notice the repetition of the ‘ivy leaf‘ as a decorative element, both in the design of the iron railings and in some of the marble mouldings, as well as in the application of different floral motifs in the capitals of the various colonnades and geometric roses in the closures of the ogival arches. The tiles are coloured green.

The surrounding woods are characterised by exotic vegetation including Brazilian almond, pau-santo, Brazilian pine, palm, eucalyptus, japonica and many national varieties such as oak, plane, cedar, maritime pine, chestnut, willow, mimosa and cork oak. Within the property there is a lake with a cave with fake stalactites to bring a romantic vision in imitation of the medieval period, reproducing nature, preferring the ‘forest’ to the geometric Baroque garden.

1919 – Work is suspended, at a stage when the interior of the building is reduced to its basic structures; unfinished, work is budgeted, at the time, for 370 contos de réis;

1938 – The building is sold, for 165 contos de réis, to an English nobleman who later resells it, for 80 contos de réis, to the Count of Vizela’s accountant, Alberto Torres de Figueiredo. Francisco Joaquim Alves de Macedo bought the property and began work on it, without any plans for its restoration, in an attempt to revive the idea of the previous owners. This attempt was thwarted due to multiple disagreements that arose during the works, particularly with the local municipality. During the restoration, the little that remained of the interior decorative elements was destroyed along with the ceramics (azulejos, tiles and roof tiles), in addition to the removal of all the wood, the structural basis of all the floors.

20th century (second half) – Acquired by the Palmeira Parish Council, which granted the property to IPALTUR, Investimentos Turísticos, S.A. through a long-term, renewable contract;

1985, 20 February – Classification Order, with approval as a Property of Public Interest (IIP);

1992 – Adaptation, described as a transformation, into a cultural and recreational space, as well as a restaurant and other social and hotel services, with design by architect Paulo Tonet;

1992, November – Joaquim Costa, director of IPALTUR, sells the building to the company ‘Veloso – Empreendimentos Turísticos e Residenciais’, in order to pay an alleged debt, not wanted by the other creditors;

1993 – Filing of IPALTUR’s bankruptcy petition, by the Caixa Geral de Depósitos, the company’s main creditor, and uncertain ownership of the building, as it is mortgaged;

1998 – Acquisition of the property by Caixa Geral de Depósitos;

2004 – Caixa Geral de Depósitos sells the property at public auction for approximately EUR 2 million to the real estate company Europovoa – Construções e Imobiliária,Lda. based in Póvoa do Varzim and led by José Campos.

2013 – The property is classified as a monument of public interest by order of the Secretary of State for Culture, a decision that confirms that it is “a cultural value of national importance” and whose definitive deterioration represents “serious damage to cultural heritage”. The decision places Palmeira Castle under special protection.

2014 – It is purchased by a contractor from Póvoa de Varzim (PMA Construções).

2019 – The castle is sold to two brothers, one emigrated to the United States and the other residing in Portugal, who intend to carry out some adaptation works in the surrounding space, in order to turn it into an event venue.

2022 – Announcement that the owners are preparing a project to convert the building for tourism purposes, with different values, including that of a charming hotel.