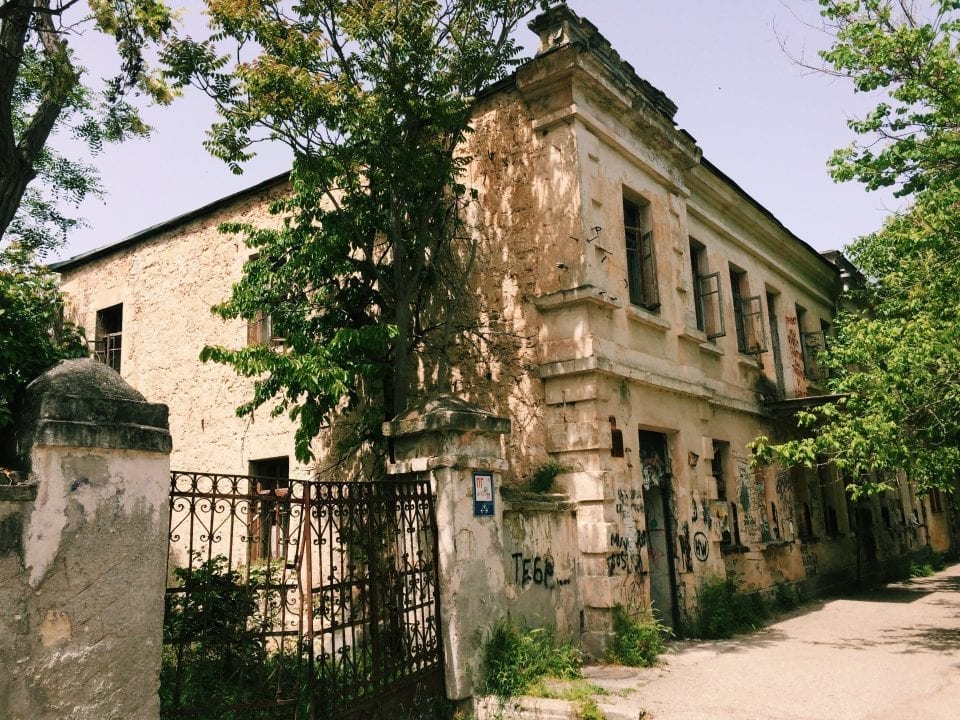 Almost every building in Sevastopol is somehow connected with the war. The defense of the city lasted exactly 250 days, so the Hitlerites during this time were occupuing some of the houses in the city, leaving their traces… “Haunted House” in the heart of Sevastopol isn’t the exception.

The building of the former mine-torpedo department of the Red Banner Black Sea is located on the central hill, right in the center of the city. Nearby, just 200 meters away, there is the best school in the city – the First Sevastopol Gymnasium.

The windows of the building are blocked, but the entrance gate is open, so it will be easy to get inside.

Originally, the building was built in the 80s of the 19th century. The construction was started by Mikhail Kazi, who was at that time the head of the city, the organizer of the Russian shipbuilding and the captain of the 2nd rank.

The building was miraculously preserved after two revolutions and civil war. After the revolution and until the Great Patriotic War, the building housed a military department, particularly the mine torpedo department of the Red Banner Black Sea.

During World War II, there was a department of the field gendarmerie of the Third Reich, led by Lieutenant-General of the Military Police Ernst Schreve. According to rumors, prisoners were tortured in basements of the building. And in the courtyard they shot communists and other people disliked by the fascists. In the courtyard you can still find a wall with bullet marks.

After the war, everything returned to its places and the building was again occupied by the mine torpedo department, which was there until 1997.

There is a legend, according to which in the house there is a room under the number 13. It is there, but no one can find it. And the one who managed to do it, disappeared.

Inside the building there are several graffiti. The most interesting and most sad is the drawing of three little men. On the second floor, one man is drawn, and on the first floor, the other two, who hold the hand of the first one. It is said that the graffiti is dedicated to the three friends who hanged themselves in this house.

The building itself today looks very miserable. The house stinks, a lot of rubbish is scattered around, the boards, from which the floor was laid, are damp.

The only one visitors of this place are homeless and young people who come here to get a bit of extreme. Until recently, on the balcony of the second floor, there was a beautiful iron frame, today it does not exist: apparently, it was taken to scrap metal.