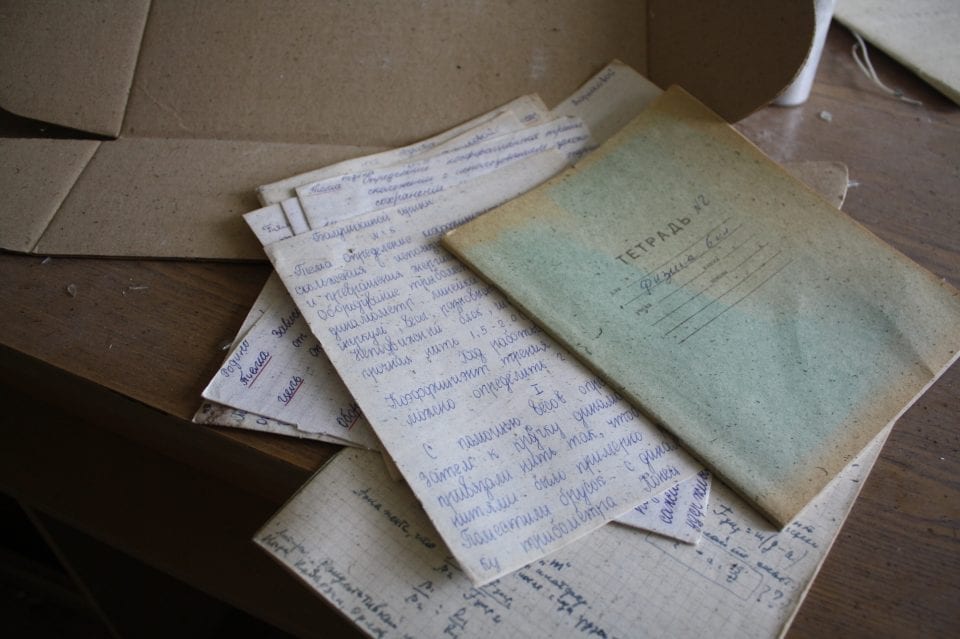 In Russia, there are incredibly few abandoned buildings in which at least something has survived. Therefore, when you find one, you need to take your foot in your hands (or rather, charge the camera and take flashlights) and immediately go to the place. That’s what we did today after yesterday’s hint about one school in Moscow region.

Abandoned school number 2 is located in the village of Aprelevka. To get to it, you need to get off at Pobeda station (platform of the Kiev direction), go a little deeper into the village and here you are.

There is no guard at this school, you can get inside through broken windows or directly through the open door.

The settlement with a beautiful name “Pobeda” (Victory) began to be populated right after the finish of the war. Mostly there lived workers who worked at the local factory “Proletarian Labor”, which produced nails. A water tower appeared in the village, columns were installed in the courtyards, wells and cesspools were dug. At the same time, there was established a local secondary school number 2.

No date for the appearance of the school, as well as the dates of its closure – completely nowhere. The institute was just opened and then suddenly closed without any reasons. Even the site of the school doesn’t say anything about it. Happened that just stopped to be updated and that’s all.

On the forums you can find information that the school was built on a swamp.

“As I now remember the adjoining territory of the school represented and represents a continuous year-round mire with the world swarming in the warm season. The same marsh is presented under the school floors. In general, it is not clear why in 1972 there was no more dry place for the construction of the facility. Not less surprised was the complete lack of sewage system of this institution. Cesspool located somewhere in the backyard of the school in (the swamp) was a terrible place,” writes one of the graduates of the school. 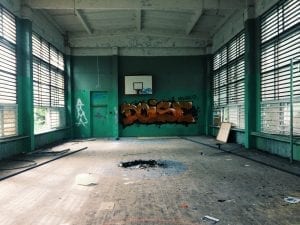 Local residents said that the school was finally closed about five years ago after a new school №1 appeared quite near. However, the new one does not cope with the number of children in the village, so to solve this problem, it was decided to begin building an extension to this school (didn’t start yet).

Also local residents themselves hope that the construction of multi-storey residential buildings near the village will lead to an increase in the number of schoolchildren, which will open school number 2 anew. The construction itself was frozen several times and it is not yet clear about its restoration.

But back to school. To date, it is a pretty sad sight. It is clear that the institute is living out its last days, so we advise you to visit it as soon as possible.

The building consists of two floors, many offices, a medical center and a sports hall. The second floor was significantly spoiled by the recent fire. In the remaining offices you can still find maps, textbooks, school notebooks, and flasks.