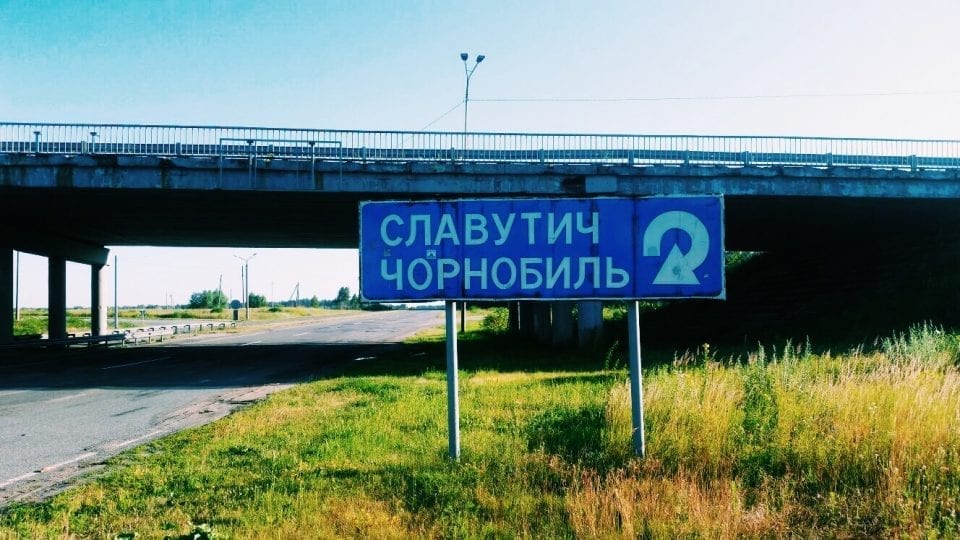 Few of you know, but the Chernobyl Exclusion Zone can be visited for free and even legally. Today we will tell you about one of those ways.

When we have heard that in the city Slavutych, in northern Ukraine,  there is a train to Chernobyl, we immediately went to this city. This trip helped us to gain a lot of new information about the tragedy of 1986, and also to hear from the first mouth, how is there, in the Zone, today?

The city of Slavutych, whose name we did not even hear before, we reached by hitchhiking from Kiev. Already in 100 km from the city, we began to be taken by drivers who have already been in Chernobyl nuclear power plant or whose friends work there. And only after arriving in the city itself, we realized where we were…

The town of Slavutych is a satellite of the Chernobyl nuclear power plant, which was built after the tragedy, instead of Pripyat. Now mostly the workers of the power plant and their families are living in the city.

We came to this city to take the train Slavutych-Semihody, which should bring us exactly to the Zone. The train leaves the station five times per day. Similarly works in the opposite direction. Every day it carries to/from the work engineers, guards, contractors, scientists. The current train schedule can be found, for example, here.

And here we are at the station, literally at the last-minute we run into the train at 07.41. We really wanted to get on it, because otherwise we would have to spend about five hours at the Semihody station to wait for return train.

We are coming inside and do not believe our eyes: the train is almost full, all people around are talking, smiling, there were ladies with bright lipstick and in beautiful dresses who were chatting about something. We stumble a bit and asked:

-Is this train really going to Pripyat?

Everyone is nodding happily, one man even calls us to play cards, somebody is laughing at our big backpacks with a tent and mattresses:

-Do you plan to sleep overnight under the reactor?

“No way”, is what we are thinking to ourselves.

It turns out that about 3 thousand workers take this train every day to reach their work on power plant.

A man who is sitting next to us was very happy to talk. He sais, he has been working at the Chernobyl nuclear power plant for 25 years. He adds that the majority of those who travel with us in the same train worked both during the construction of the nuclear power plant and during its operation. Later they were attracted to the liquidation of the accident. Today, their help is needed for the final elimination of the consequences of the disaster. The workers are happy to have this job. They were proud to tell us that there will be work for them  for at least next 100 years (they were happy even despite that fact that for such job they are paid just 500$ per months).

Every year they undergo a medical examination. They say that health is in order, there are some deviations, but all of them are within normal limits.

What we have seen

What can give you this trip except the interesting communication with workers? In general, you can see quite a few things, but they are also quite interesting.

During the trip we stopped just once, at the station of the village of Lesnoy. Further, we twice crossed the border of Belarus (naturally without stopping, so there was no border control), and then arrived at the station Semihody, which is located near the fourth reactor and the city of Pripyat.

On the Belarusian territory we passed the station of the Peresadochnaya (Interchange), which is now inoperative, and also the abandoned train TE3-6746 near it. The transfer station was built in the first years after the Chernobyl disaster in the area of ​​the former Kaporanka road: four platforms with items for decontamination and washing electric trains. Employees of the Chernobyl nuclear power station, traveling from Slavutych, not only moved to the “dirty” electric trains that followed from the transfer station to Semihody, but also changed their clothes. Clothing was also changed in Semihodes. The same worked in the opposite direction. The station operated until 1991.

The border with Belarus ends after crossing the Pripyat River. From here already we could see the unfinished fifth and sixth blocks. On the right side of the window in the distance, the ghost town of Pripyat loomed (we have seen it closer in two days). Already at the entrance to the station we saw the first, second, third blocks, and also the fourth, hidden under the sarcophagus.

The trip lasted 45 minutes. Exit from the train had a closed type: without a special permission you will not be allowed to enter the Zone. Also it was not possible to jump from the platform.

When we left the station and tried to approach the checkpoint, a policeman immediately came to us and asked for the documents. Realizing that we are ordinary tourists, he immediately set us on the return train at 08.40 and asked the soldiers returning from the work to look after us.

In this article, we told you about one of the opportunities to visit the Chernobyl exclusion Zone. About the other two ways – with the help of the tour and illegal penetration, we will tell in our subsequent articles.

PS: in the previous article we have talked with stalkers who have already illegally visited the Zone and now share their impressions. Take a look!