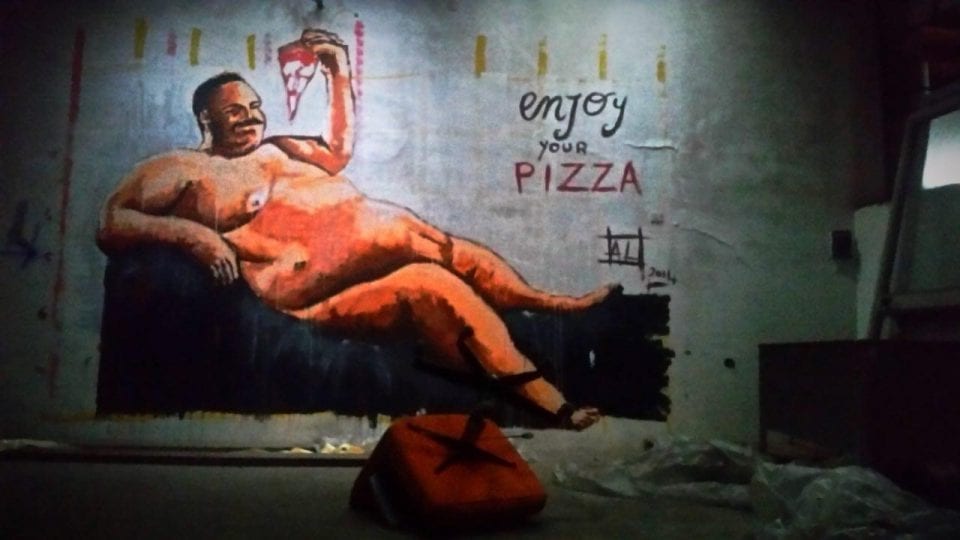 Today Stalker jumps the fence to enter the Chiari and Forti plant in Silea, province of Treviso. The former industrial area is large enough to be seen two, three km away. To enter you can easily go to the side of the main gate, leaving the car in the parking lot next to the bus stop in via Cendon. When you enter, you need only pay attention to some truck driver who parks nearby.

Chiari & Forti was born as a molitor in 1920 in Parma thanks to the spirit and the entrepreneurial vocation of the families Chiari, Forti and Medioli. In 1937 the Silea mill was purchased and eventually became the industry and the seat of the whole group. During the war, the plant works on several cereals, including corn: the demand for fat is high. In 1941 the first oil squeeze press was installed, at that time very precious,derived from grinding corn through the germ.

In 1957, Chiari & Forti has the merit of launching a canned seed oil first in the market: Topazio. In 1959, was born oil Heart, the first dietary corn oil that, still today, is the leader of the category.

The 1960s are very frantic years: everyone works with great enthusiasm and the Silea plant is getting bigger. In 1970, after the purchase of Pandea di Parma, the marketing of simple flours switch to a finished product destined for the consumer.

In 1974, some market events cause a slowdown in all development programs. It happen to have really hard years for the company.

In 1975, thanks to the help and entry of Giulio Malgara, through crossing sacrifices, struggles and hard work, he managed to put things back to the best. During the same period, the first contacts with the Quaker, the American Food Company, were taken.

Since 1978, Quaker has become a partner of Chiari & Forti, with capital ever increasing until 1980, when almost all of the capital is in the hands of the American society. In 1981, the Castiglione plant was purchased and later expanded to become the largest Italian petfood manufacturer.

In 1991, a specific plant was installed at Silea to produce Gatorade, a product that has been widely successful in the US.

In 1992, Giulio Malgara, after reaching the top of his career as Quaker’s European President, leaves the company to embark on a new entrepreneurial venture. Some “pieces” of the Quaker Chiari & Forti are purchased by Giulio Malgara, while the oils, petfoods and Gatorade remain at Quaker.

In 1995 Malgara decided to buy Chiari and Forti and in 1996 through an agreement the company returned to be Italian. From that moment on there is an intense flourishing of initiatives and activities. New companies are being acquired and new brands are added.

In 2001, President Malgara became a sole shareholder. The area of Silea follows the company’s fate. Debt amounts to 175 million euros and a breakdown of disposals is taking place.

In 2004, years when we begin to think that there is no future for the company, Malgara offers to finance the upgrading along with a consortium of real estate entrepreneurs.

In 2006 Malgara sell in block of 25 million the entire conglomerate on the Sile to Francesco Bellavista Caltagirone, publisher of the Gazzettino thanks to Acqua Pia Antica Marcia, a Roman society. Objective: to open the construction sites in 2007 and finish the work in 2010. Judicial inquiries and the arrest of Caltagirone in 2012, combined with a completely unsustainable debt of Acqua Pia Antica Marcia will do the rest.

The auction is auctioned with auction base set at 12.3 million. Nothing. Second attempt: desert. Shortly before the third there will be a stake at Mulino Toso. Silea could thus greet any hopes of seeing one of the most extraordinary examples of recovery in his territory realized.

You walk down the main road, still under the unceasing rainstorm. To our right, behind the safety net, the immense stable brick-red dusty colour. The place is gigantic and in that short time that we have left, our exploration will only be incomplete. All of a sudden, in the middle of our path, we are in front of a stroller, abandoned and left in the middle of the street. A frame of the Chernobyl Diaries movie goes through my mind.

Continuing along the street, you can see the offices where various documents and practices of the company are included, as well as scale models of the retraining project.

The big cheese is the part where the fire occurred. We leave the offices and in front of us we find this huge building destroyed by flames. We come in and look up: there are steel irons and beams half folded out because of excessive heat during the devastation. Under us rubble. We pass the first brick building to venture into the heart of the former company. Inside, there are machines of all kinds: from huge transformers to giant engine, from computer to control halls, from graffiti to model posters. That day apparently we were not the only urbex to visit this place. Other young boys tried to get in to get in, so our companion invited them to join us but, by misbehaving the situation, they decided instead to run for the hills. It is likely to be the fault of our friend uncompromising aspect. Walking on the upper floors you have to pay close attention, since the beams are partly or totally burnt and dug out of the water. Going up to the top floor you can enjoy a marvelous view. Everything around the building is surrounded by the river where you can spot swans and ducks. Further on the fields and greenery, even further down the mountains …