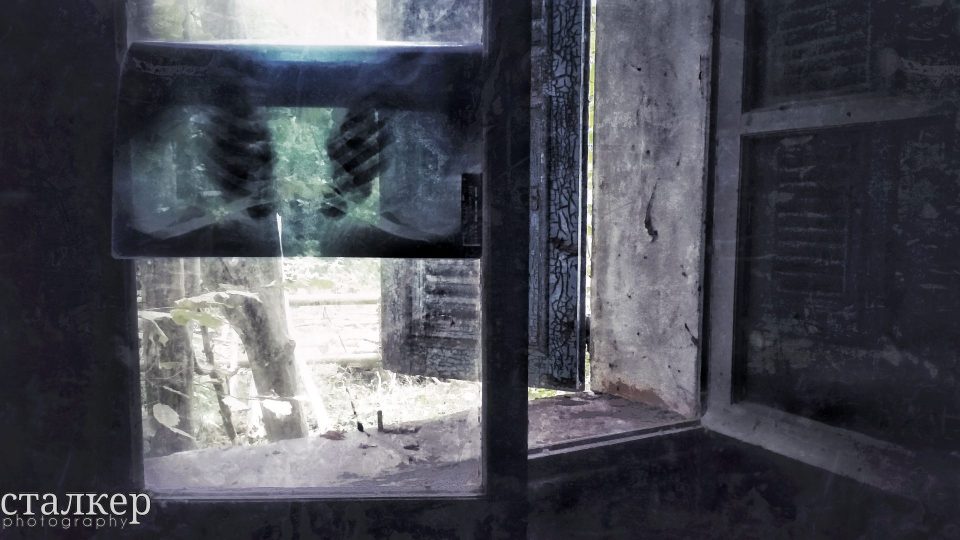 The entering in the institution from the patient involves the immediate loss of certain references: “a series of self-humiliations, degradations and profanations” that gives rise to a radical change in his/her moral career.

Granzatte’s asylum is located in Via Vincenzo Chiurigi, Rovigo. The perimeter that delimits the area is huge and surrounded by a channel: accessing it can be as easy as difficult, it depends entirely on the entry you choose. You can skip the two main gates through the bridge (be careful because you will be very much in sight as the cars will pass and behind you there will be a row of houses) or opt for a stealthy entrance. Being stealth means going through a condominium area and with nonchalance jumping a rope that forbids passing over the bridge and the access to the fields. From there turn left and go straight until you get in front of a closed gate with a simple lace.

The asylum has a semi-circular structure due to the channel that delimits it all around. Its circular disposition made it unique in its kind. The architecture of the buildings is neoclassical, with the exception of the neo-gothic church – externally – and eclectic style -internally-.

The project of the asylum dates back to 1906 in order to bring together all the Polesians madmen who were scattered in 41 hospitals of Italy. After many events, suspensions and use of the area during the First World War by the military administration, the opening of the asylum is officially held on March 20, 1930. Built to accommodate an average of 400 patients will go to welcome many more. 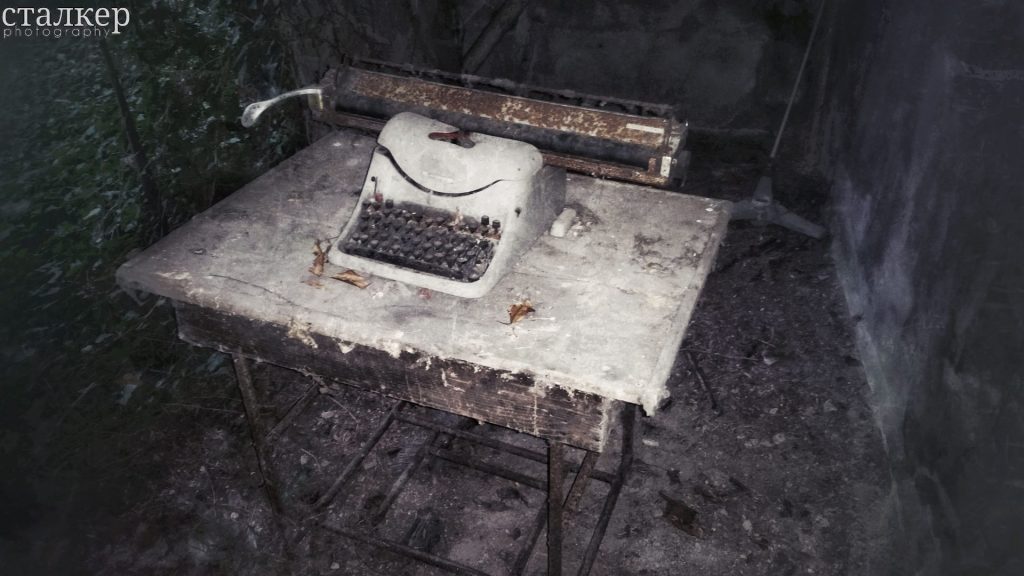 The years 1940-45 represent a period of great difficulty for the asylum of Rovigo: the lack of recruited doctors and nurses, the restrictions of war, overcrowding, the economic crisis – there was only a doctor in charge, no nursing staff and the use of religious staff, 15 nuns, to replace the medical staff – made this situation unbearable. To further aggravate the situation was the introduction of the electrotherapy machine on May 5 1941, dictated by an act of Provincial Administration. The psychiatric hospital was later used by the Nazi-fascists to lock in prisoners and place some machine-gun and anti-aircraft on the roof of the buildings. 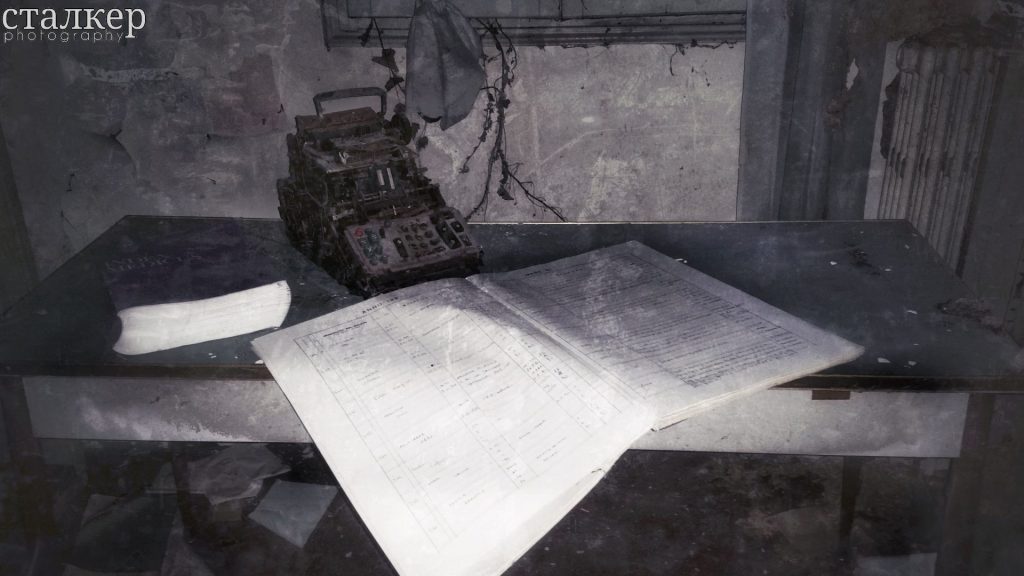 From 1930 to 1980, the Psychiatric Hospital of Rovigo has “hired and treated” mental patients throughout the province of Rovigo “accepting” thousands of patients. A function of “hospitalization and treatment” practiced with coercitive and violent methods such as electroshock and insulin therapy. Thanks to the Basaglia Law, the structure was finally closed on 31 December 1997.

Nowadays some pavilions have been closed, the documents are cataloged and collected in special spaces, and guided tours are organized once a month to relive the history and memory of this abandoned place. 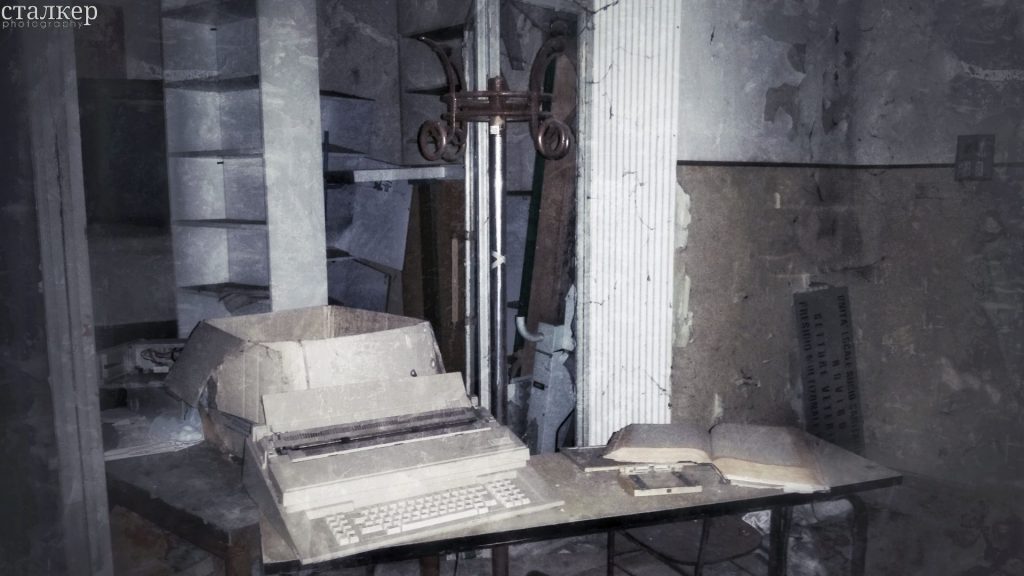 The Treasures of the Germans

In the period from 17 to 26 April 1945, among all dead bodies of German soldiers in the river Adige, a woman would recover a note addressed to Hans Mayer in which the asylum of Granzette was mentioned several times with the word “gold“.

Voices tell of a group of German invaders who, during the retreat in April 1945, worried about facing the Adige River swimming (the bridges were destroyed) would have hidden a treasure chest in the asylum of Granzette, previously used by German troops. 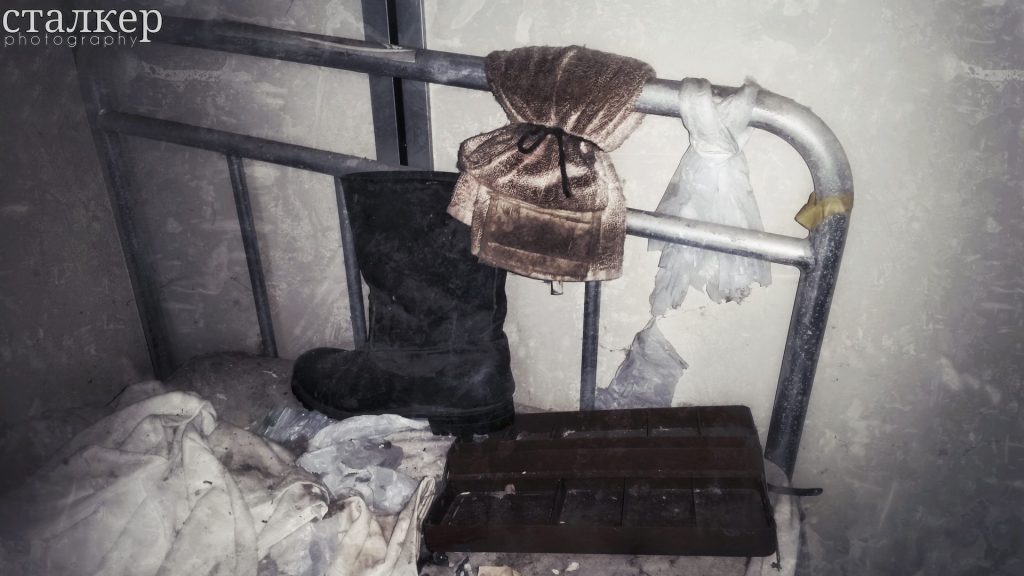 The mystery of the underground deposit

A statement by a retired infirmary and the former director of the asylum affirms the presence of an underground deposit located inside the area of the asylum. It is a stock of explosives and weapons dating from the First World War. 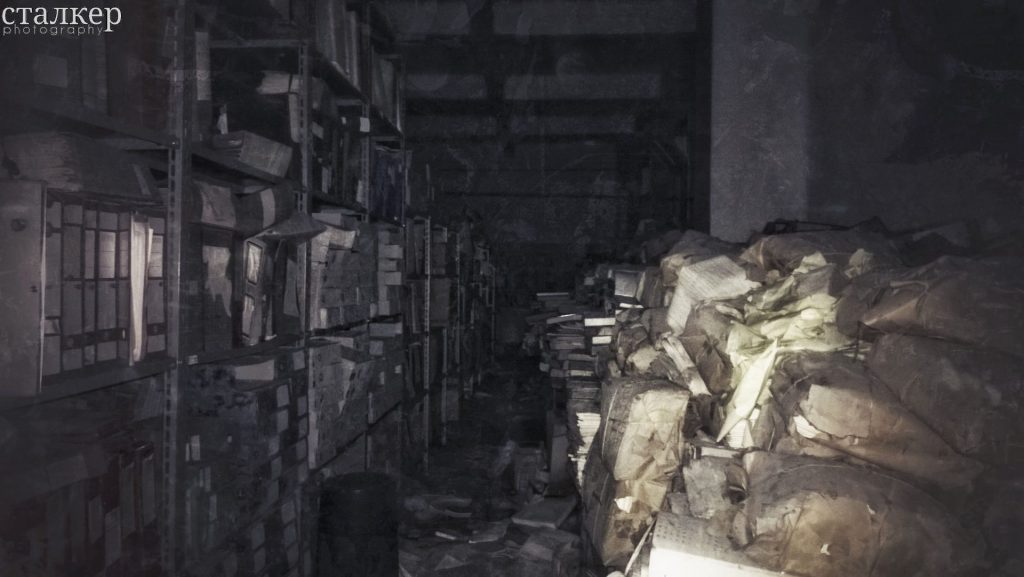 Luigino was born in 1945 in women’s baths, from a patient affected by mental problems and unknown father. His destiny was to go to orphanage but instead he was protected by Nurse Teresa who took him personally into custody. Being an adult, after an experience in a hospital in Milan, finds work in the very same asylum where he was born. 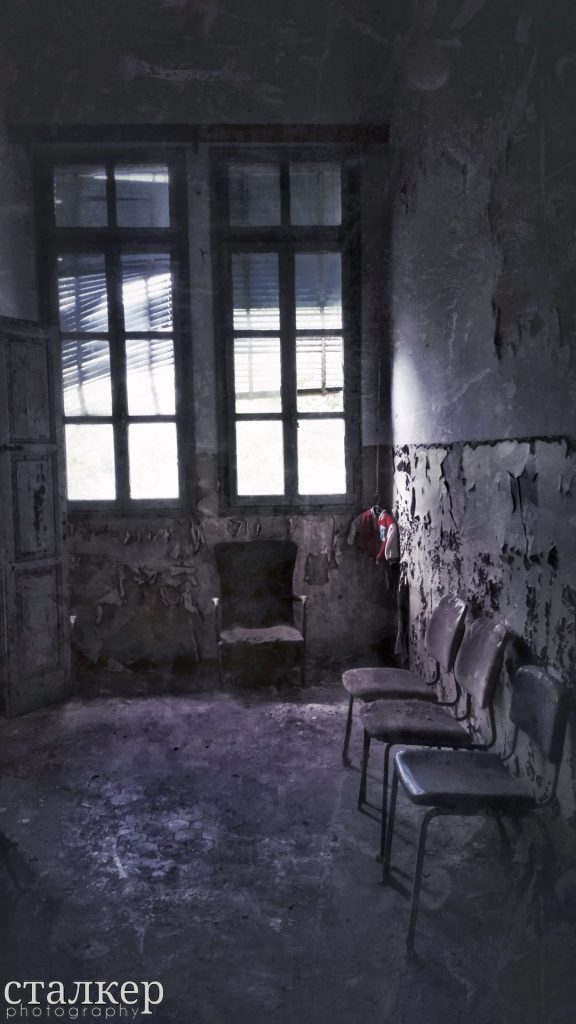 We are talking about a story of a patient, or rather an artist, who during his stay in the psychiatric hospital painted the beauty of 48 wall paintings (3×2 meters) in various departments. By this he could open doors and windows in reinforced concrete walls, pass through steel bars, and open his mind in complete closure situations. 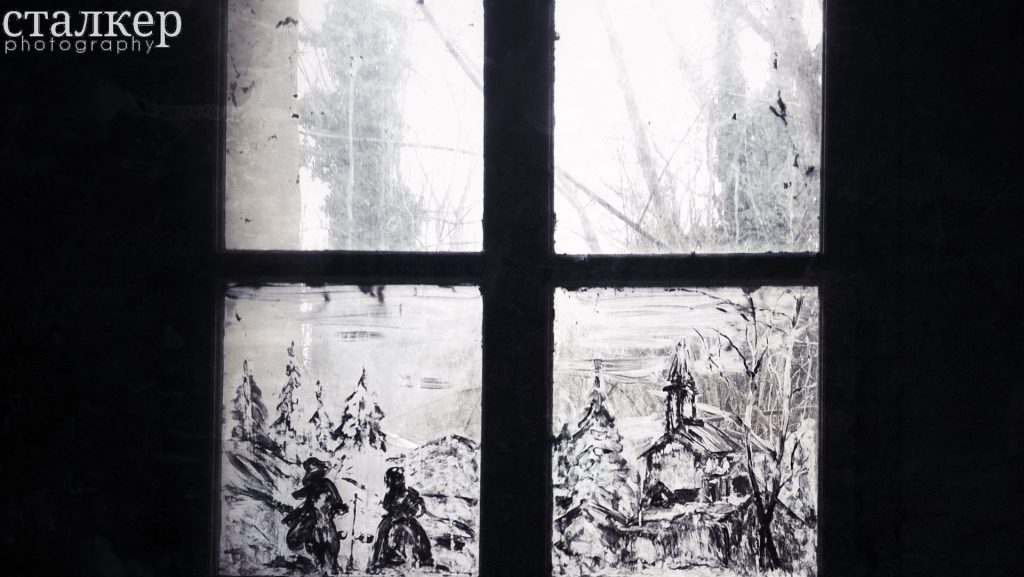 An emblematic and thaumaturgical place of the asylum is the seashell fountain located in a pitch at the side of the management. Its shell shape recalls the semicircle structure of the asylum and revoke a moment of reflection. Two putti with a cornucopia in the hand make fruit and flowers come out together with the sufferings of the interns of the asylum. Also the fountain was designed by the artist of the asylum. 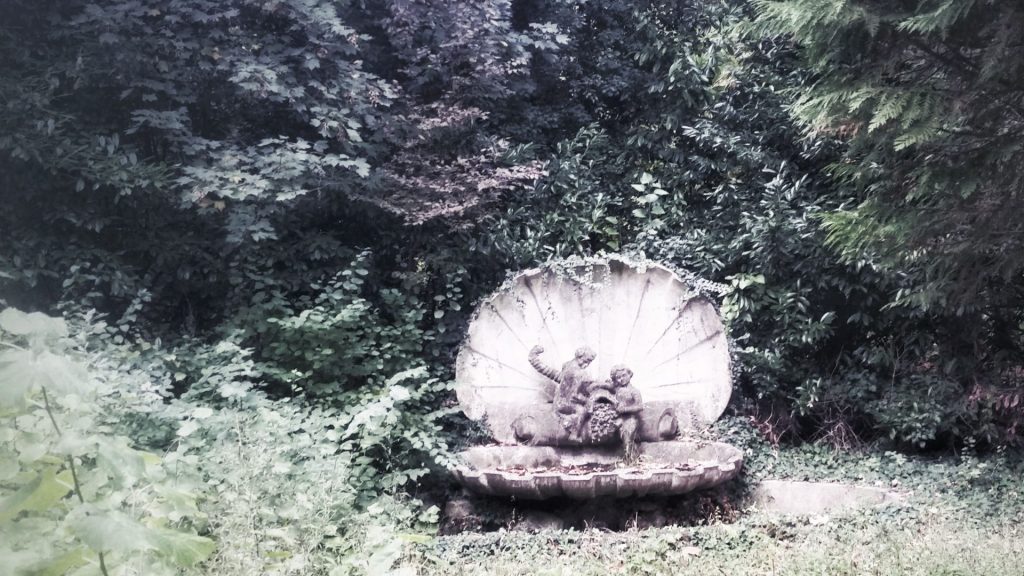 From the top, positioned above the laundry, stands the statue of the virgin Mary who protects and blesses from the center of the semi-circular structure of the asylum all throughout the surrounding area. Underneath the statue you can find a plate affixed to the wall with written: “November 7, 1945 (in Roman numerals). The image of the Blessed Virgin of the miraculous medal, which from the top of this building blesses its faithful, was raised by unanimous vote of the hospital staff and hospitality, for the grace of having preserved it benevolently from the destruction of the war 1940-45 which around here largely sowed ruins and death. Ave Maria gratia plena “. 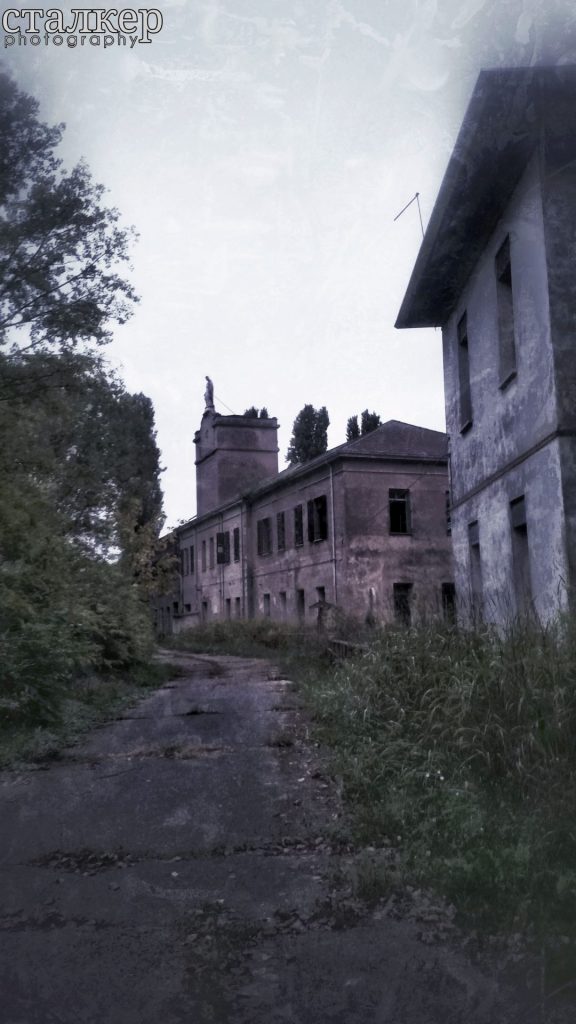 Rumors that rise over the night – especially if full moon – screams and moans echo in the area of the asylum. In addition to this is possible to hear the names of people who, repeated one after the other, as if they were a mantra, set up a cantilene. In particular moments of the night, patients awaken and make their voice heard, their sufferings and what they have not been able to express in total closure moments. Their screams have crystallized over time and slowly get released. They will stay forever here, within the perimeters of the institute, until one day someone will not bless the souls of these damn poor.

A Malleghem * covenant, dating from the Middle Ages, meets in time set in front of the neuropsychiatric department. During full moon or solstice nights, they perform rites of passage and exorcism at a moment of utter carnality: trains of joy, conningulus and fellatoi, numbers from acrobats with contortions, kamasutra positions, coitus and spasmodic screams.

* In the Flemish language of the ‘500, “mal” is the crazy, while “ghem” generically indicates a place of residence, so the witch is in a crazy country which, according to tradition, were extraordinary consumers of all kinds of potions or medicines and so easy prey to charlatans. In this case, people are running by the witch to get the stone of madness out of their heads. Even tradition, in fact, claimed that folly was in the head of people in the form of stone, and that extraction of the latter would have resulted in complete healing. The witch, positioned at his work table, shows to the trepidatious crowd the stone she has just extracted as evidence of his abilities while one of his accomplices, hidden beneath the table itself, springs into a basket to pass new stones to show off to inmates. Her lips are locked by a padlock that alerts to the secrecy necessary for the good outcome of the scam, and the villagers who have not noticed anything show off stonewalls of varying sizes to prove their foolishness.

A threatening figure, with the characteristics of a long, white-haired crazy man, stops occasional visitors and threatens them with various contraband tools with the aim of getting them run away. Granzette is nicknamed “Piccià”, Retired Postman, who lives in Experimental Station, a closed private road. The guardian claims to have had a “delivery” by a Ullss referent and a doctor from the former Psychiatric Hospital, so that no one is allowed to enter. 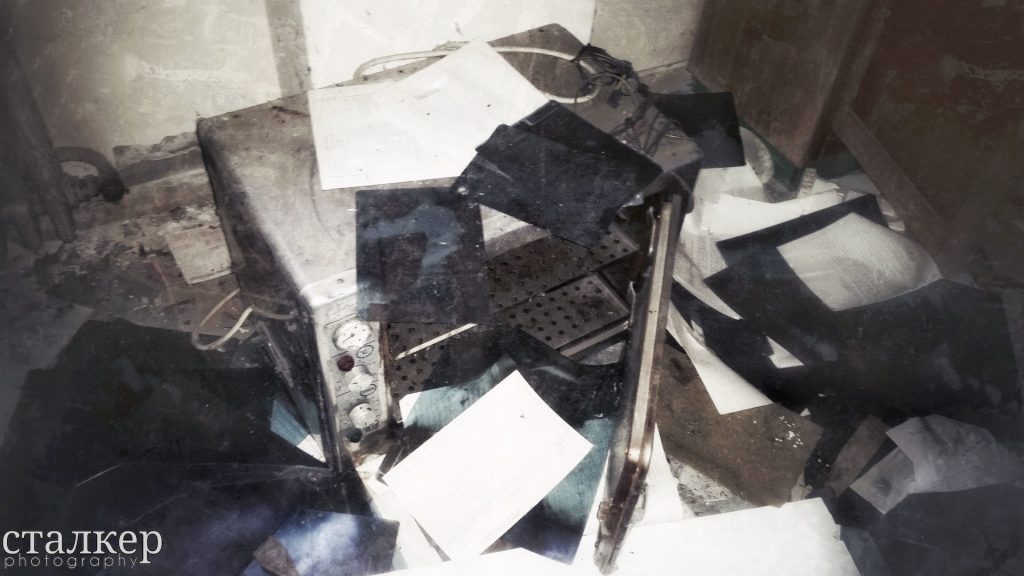 A little of sociology

The same admission procedures involve the substantial loss of everything that the individual possesses and its replacement with standardized and uniform objects owned by the institution. The deprivation of every object tied to the previous social status is easily transformed into the symbol of the new situation of personal inadequacy. The name, replaced by a serial number, is accompanied by real obedience tests that serve to communicate the advantages of a deferent attitude towards the authorities. There is a “not-inculturation process”, that is a lack of training that makes the intern unable – temporarily – to handle some of the typical situations of everyday life in the outside world if and when he returns. The mining of the new environment is above all the autonomy of action: one of the most explicit ways to do this is to oblige the sick person to seek permission or to seek help for minor activities. The “questions” have the immediate effect of undermining the self-determination, autonomy and freedom of action that any man is used to have. The institution’s daily life becomes the only temporal reference and the internship becomes part of another deeply structured world. The patient is forced to participate in already established dynamics regarding the definition of one’s own membership in one of the two opposing groups (one or more subgroups of which he / she is his / her reference group). 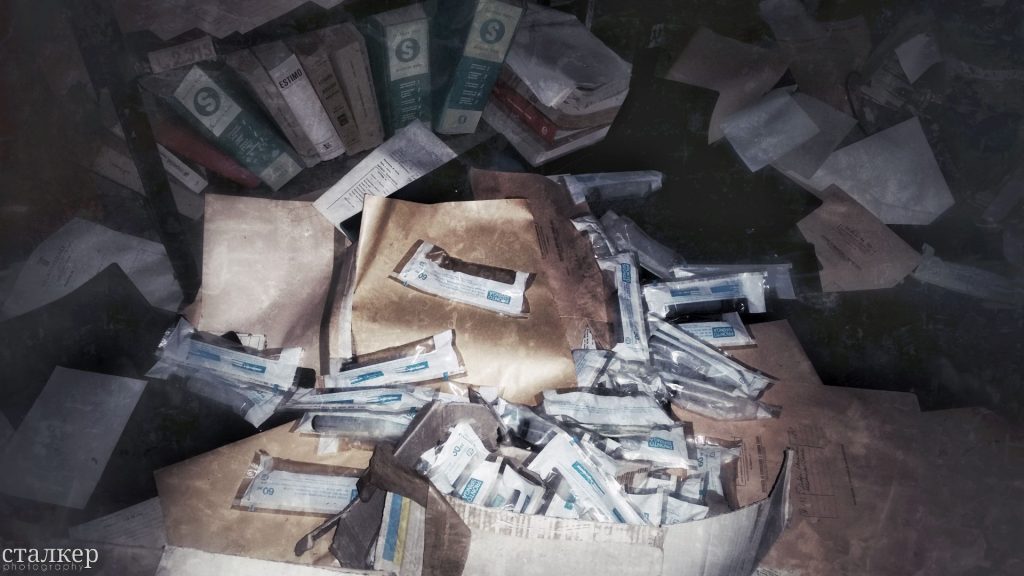 A place full of history, able to communicate much more than any other place I visited before. The first time we came to the asylum (4 years ago), everything was covered with a very foggy, almost impenetrable mist. The feeling that gave us this place, the pavilions, the immensity, the tragicness of what happened was something of unequivocal. An asylum enclosed and embedded in its own story that can’t have voice except through explorers. Wherever we went, it was as if this voice followed us, whispering in our ear and making us understand that we were not alone. Other times, the voice felt more distant and through a crackling echo came to our head, skipping auditory duct and infiltrating into our minds. The dust under our feet and the fog that covered the rest made the outlines and spaces we were visiting even more indefinite. The droplets of water formed by moisture leaned on our hoods and jackets, exponentially increasing the feeling that something, at that moment, was watching us and could take shape. It was winter and it was cold. The wheelchair in the stairs, skeletons of beds, encrusted walls, dark and endless corridors, reports of patient operations, electroshocks, syringes … all immersed in 20 hectares consisting of 9 pavilions, courtyards and agricultural colonies. The road we went to get out of this dimension has been pretty impervious. Several times we were lost in the midst of trees and branches that seemed to want to grab us and ask us to extend our stay. “I’m sorry but we are just passing through, we have no intention of stop here because, shortly, we have our last train to return home. We have collected what we wanted, without causing the slightest disturbance to you souls. I hope you can rest in peace. ”

**Historical Photos from the archive of redazione Biancoenero.