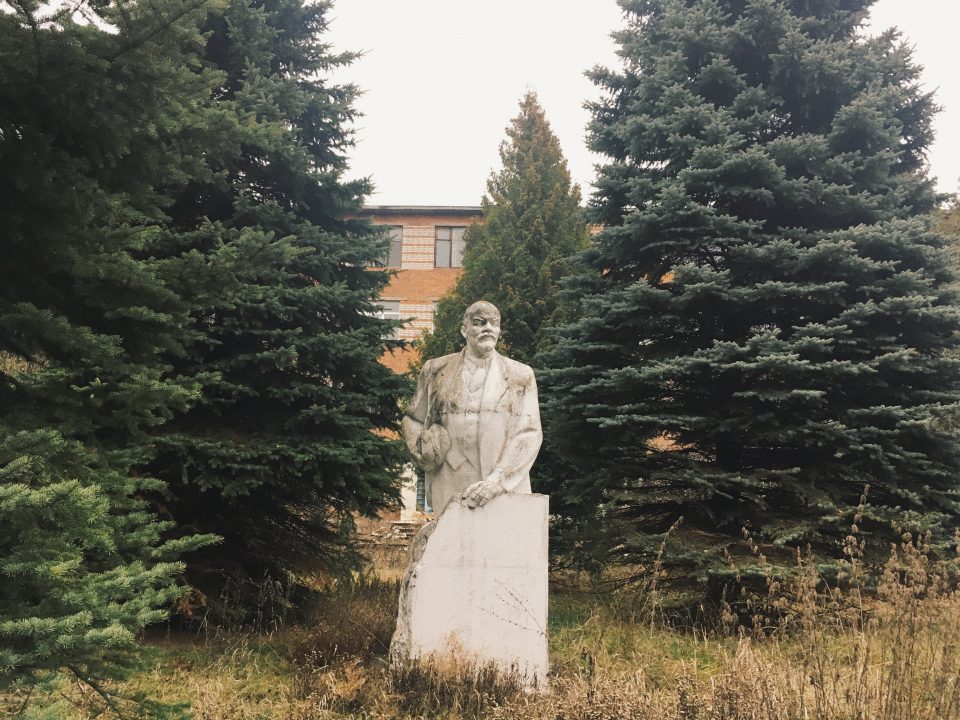 It is very hard to find in Russia some good abandoned places, that’s why when I saw in one Instagram account abandoned college in a good condition – I immediately turned on the engine of my car and here I am – in front of an ex-branch of RUDN University somewhere in Tula region.

An abandoned college is located in the village of Bogoslovsky, Tula region. It is most convenient to reach it by car, the road is quite good so no need in SUV. There are no guards or evil dogs – so just calmly go in and start your exploration.

The theological agrarian college appeared in the Tula region in the late 19th – early 20th century. In 2008, the institution celebrated its 90th anniversary. This is the oldest educational institution in the region, and it was originally created as the only church and school complex in Russia, combining 5 types of church schools that existed at that time. 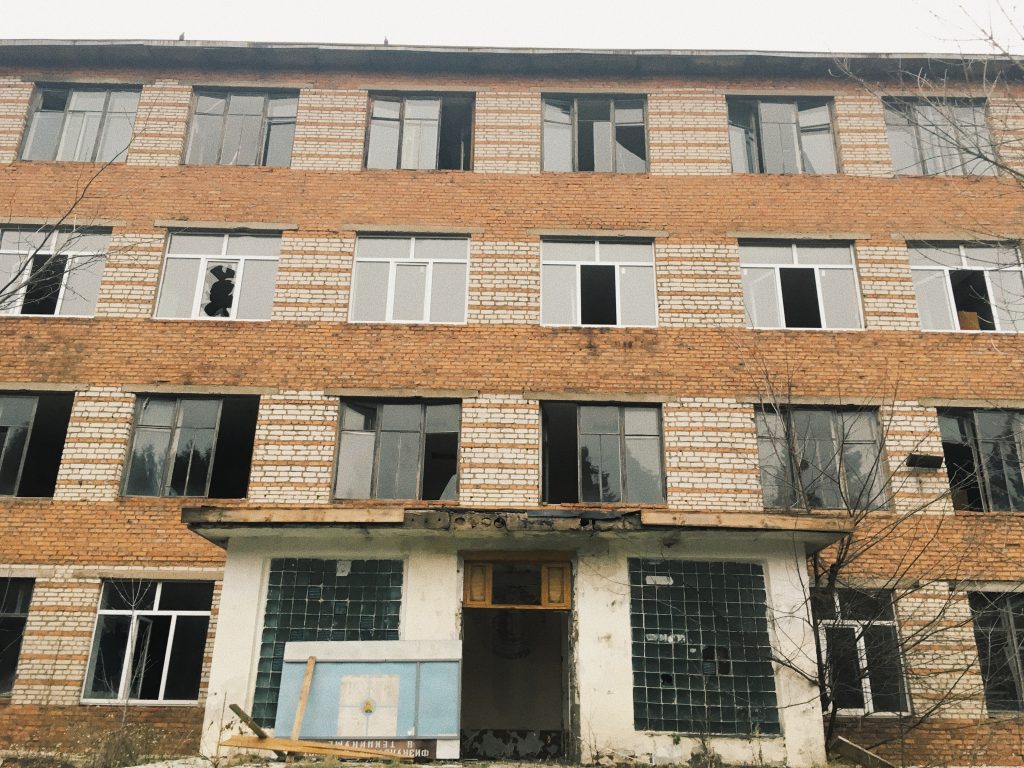 Soon in 1918 the October Revolution took place in the country and the complex was redone in the Kashira Agricultural College named after V.I. Lenin, from where the agronomists and livestock specialists were graduated. Later in 1934, the industrialization of the national economy was going on at a rapid pace in the country, and so in the college was opened the branch “mechanization of agriculture”. The zootechnical department was eventually transfered to Volokolamsk. 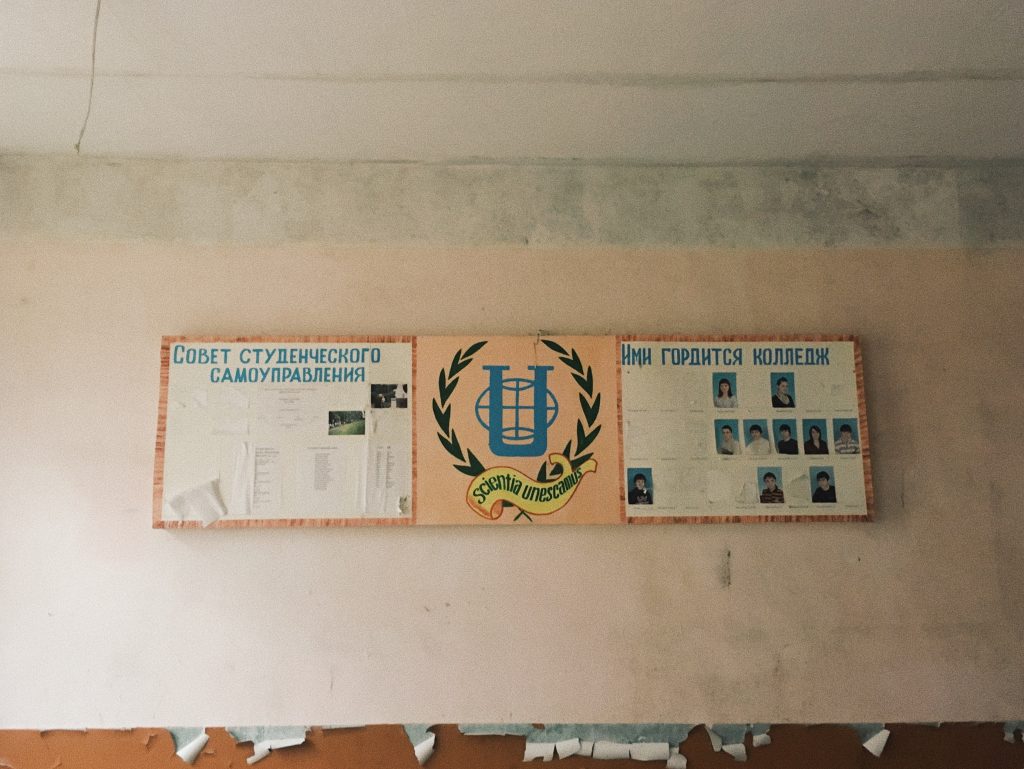 Like any other higher educational institutions that survived the tsarist and Soviet times, the college changed its name several times, while it always remained a “forge of cadres” for agriculture, and cultural center for the surrounding villages.

Already in 1996, the college became a branch of RUDN University (Peoples’ Friendship University of Russia, Moscow), and in 2002 – the Theological Agrarian College – a branch of RUDN University. Since then, many students, including foreign ones, went to Bogoslovskoye village for practical training. Recently, the following specialties have been trained there: “maintenance and repair of automobiles”, “mechanization of agriculture”, “land management”. 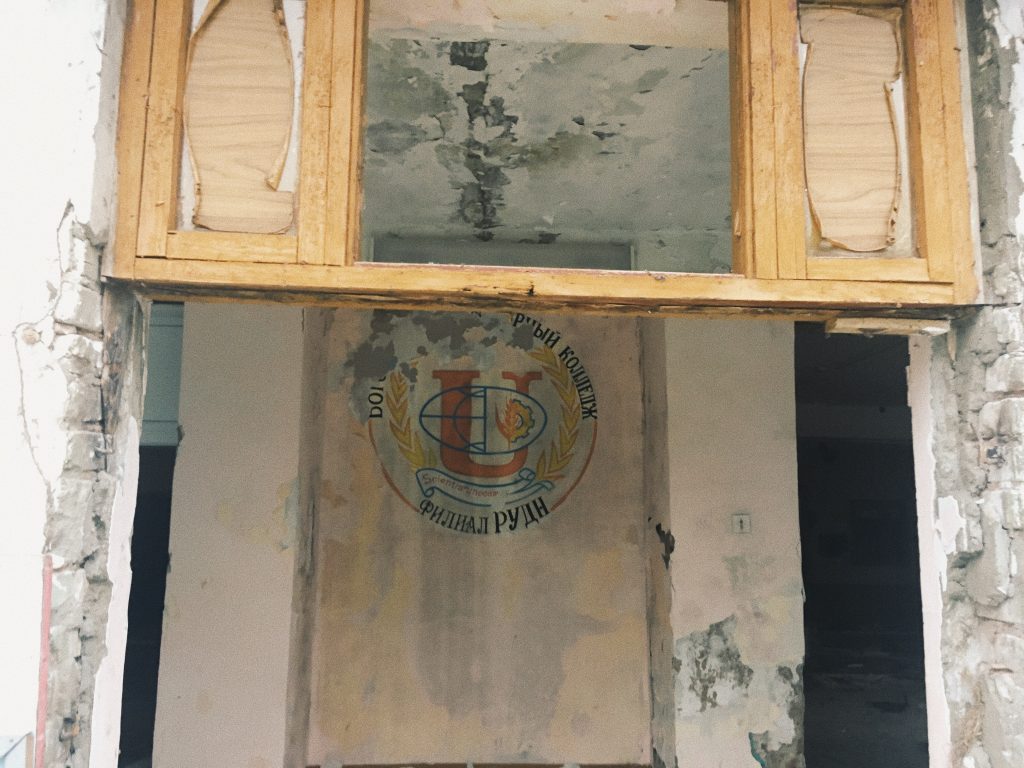 College became abandoned in 2010. Everything stopped abruptly: the order of the Federal Ministry of Education passed, according to which the institution was reduced, and the teachers were fired. Now almost 5 thousand hectares of land, 3 educational buildings and dormitories are abandoned. According to the decision of the local authorities, they decided to accommodate people in need there. 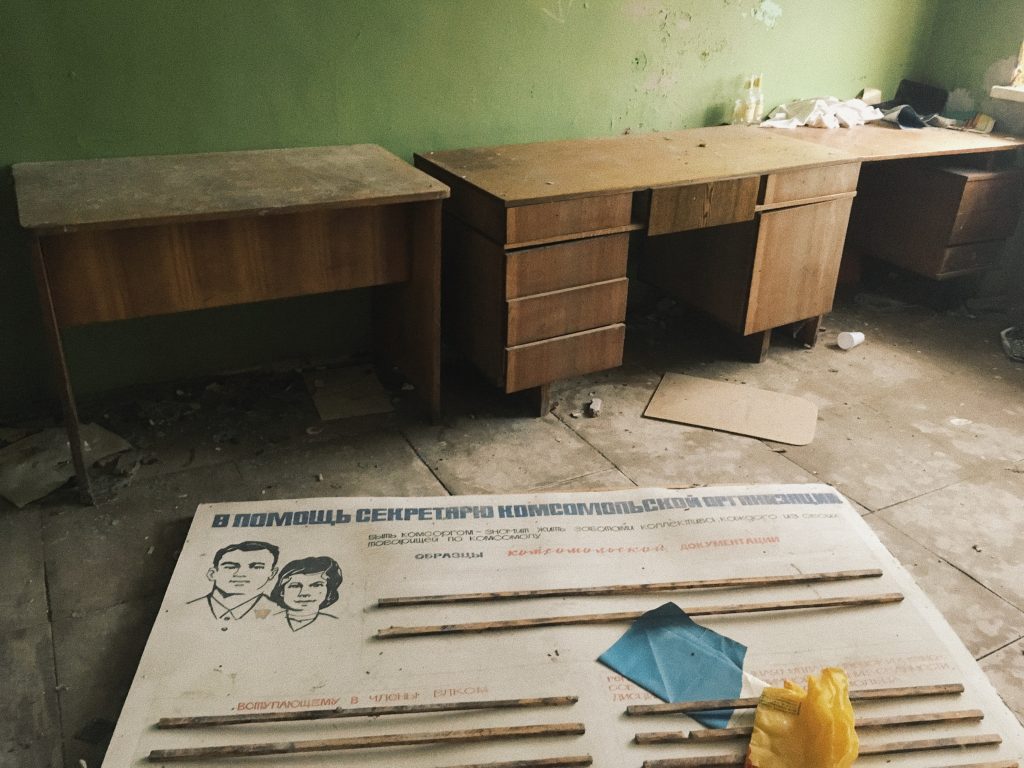 The abandoned buildings are visible from the road and so I immediately turn to them. Initially, I see some abandoned building with broken windows, where I decide to go immediately. I go in and understand: people live here. Part of the building is really abandoned, but you cannot enter in any of the rooms – because they are locked. I think that this is where the dormitory used to be located, and later the authorities decided to move some people here. 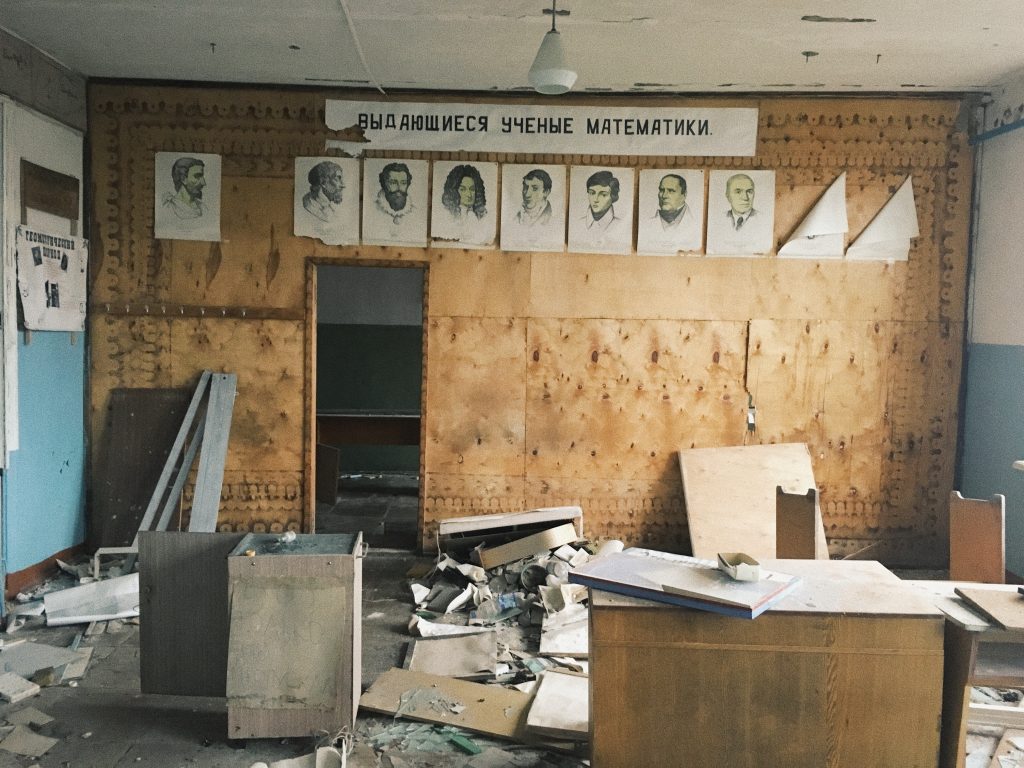 I go out and go further, this time where I need to – directly to the educational building. Yes, this is probably the first time that happens to me in Russia – I can find here many things!

I go in and I can’t stop looking there and here – so many beautiful things! But I must hurry – there is my doggie waiting me outside, whom I did not dare to take inside as there are many pieces of broken glass. 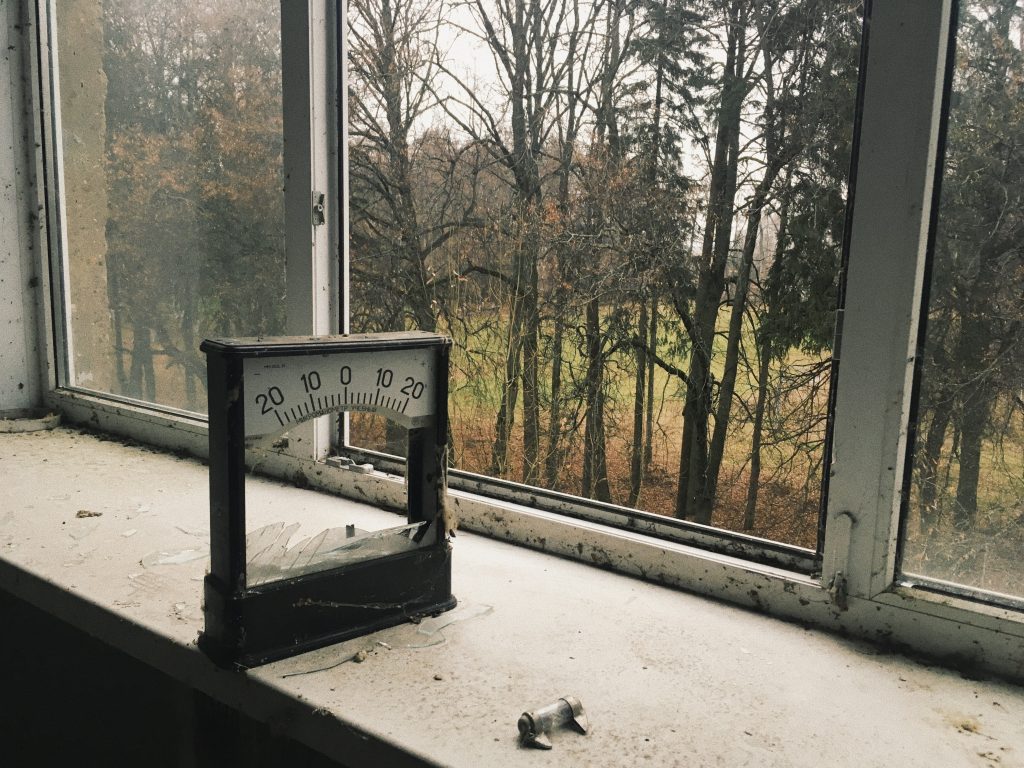 I go into one room – there are desks and old training posters lying around, in another – a collection of geological stones, in the third – painted walls. All this is so interesting and amazing! There are 4 floors ahead and each one has its own wonders – there is a huge sports hall, and there is an audience with scattered chemicals. 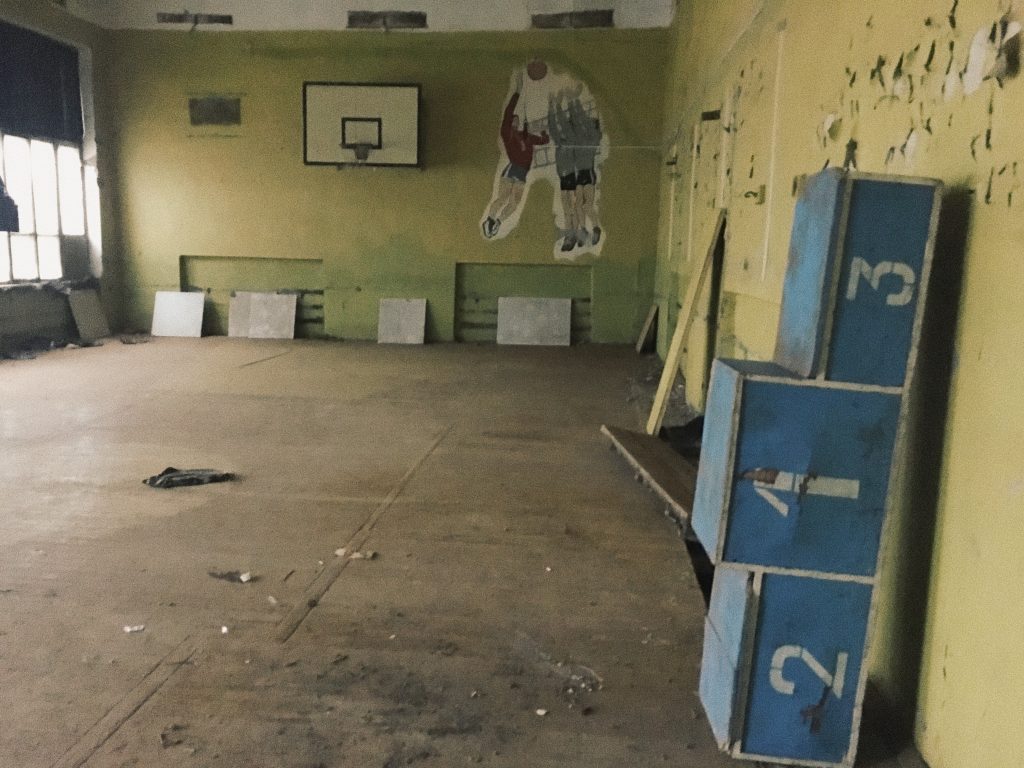 It is heaven and I am happy to discover it! On the top floor, I get scared – suddenly a couple of doves, who apparently live here, start to move. Someone is frightened of me and flies away, someone rumbles and continues to stay here. I quietly leave the room to not disturb them, and run down to my puppy. 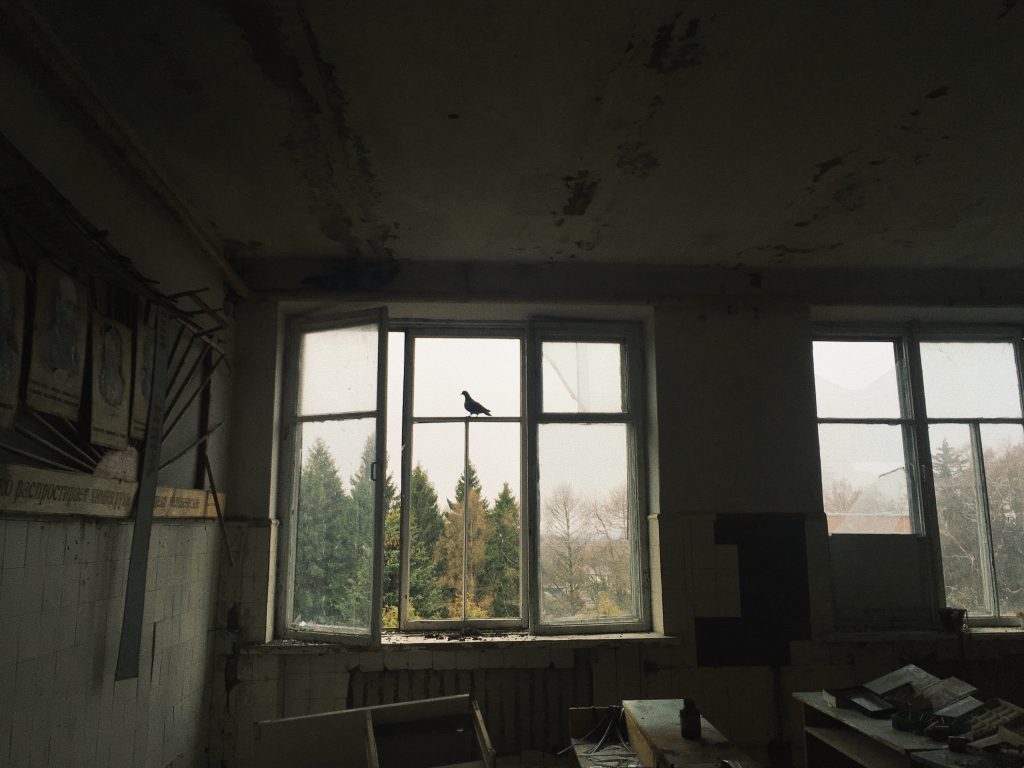 It is worth noting the design of the building itself – very fashionable, made of red brick. At the exit there is a statue of Lenin in the middle of overgrown trees, and on the side there is an inscription “Glory to work”, near which I decide to take the last picture of my second baby – beautiful Niva.