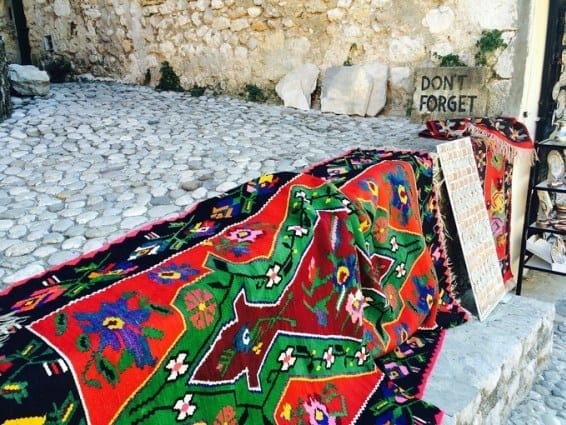 What is the war usually leaving behind? Ruined families, some heroes, and of course abandoned buildings… Some cities are still not recovered from war, even though it was more than 20 years ago. Mostar in Bosnia and Herzegovina is one of them.

Mostar is located in the south part of the country: Herzegovina. You can reach it from the capital of the country Sarajevo by bus or by train, the ride will take approximately 3 hours.

The Siege of Mostar was fought during the Bosnian war first in 1992 and then again later in 1993 to 1994. Initially lasting between April 1992 and June 1992, it involved the Croatian defence council (HVO) and the Army of the republic of Bosnia and Herzegovina (ARBiH) fighting against the Serb-dominated Yugoslav People’s army (JNA) after Bosnia and Herzegovina   declared its independence from Yugoslavia. It ended in June 1992 after the success of Operation Jackal by the Croatian army (HV) and HVO. As a result of the first siege around 90,000 residents of Mostar fled and numerous religious buildings, cultural institutions, and bridges were damaged or destroyed. As the conflict matured and the political landscape changed, the Bosnian Croats and Bosniaks (Bosnian Muslims) began to fight against each other, culminating in the Croat-Bosniak war. Between June 1993 and April 1994 the HVO besieged Bosniak-concentrated East Mostar, resulting in the deaths of numerous civilians, a cut off of humanitarian aid, damage or destruction of ten mosques, and the blowing up of the historic Stari Most bridge. Hostilities ended with the signing of the Washington agreement in March 1994 and the establishment of the Croat-Bosniak federation.

The streets are in such poor condition due to the fact that by the current law any destroyed building of historical value must be recreated in its previous form. And as all the houses were built in a really rich way,  and the war has caused the serious damage, restoration of the houses now requires a lot of money, which the government at the moment doesn’t have. Demolition of buildings is prohibited by the law. That’s why other people need to live around this ruins which always echo the war.

In Mostar almost each 3rd house is abandoned. It is really easy to come inside most of the buildings, as they are not fenced or protected. There are some signs with a warning of the danger of collapse, with the ban of penetration or parking the car nearby. But nevertheless, the people are still parking their cars just near the ruins.

The tower before was the bank, but during the war it was used as a base for snipers who would hide in the tower to take aim at their targets below. The building was the tallest one in the area and was also positioned in a way that separated the city.

Today the tower is used by some street-artists who draw some beautiful graffiti here. From here also you can find the most beautiful view on the city.

It is easy to get inside: just jump over the fence. It’s better to go during the day time, just to see where are you going, because there is so much debris, shattered glass and old office equipment.