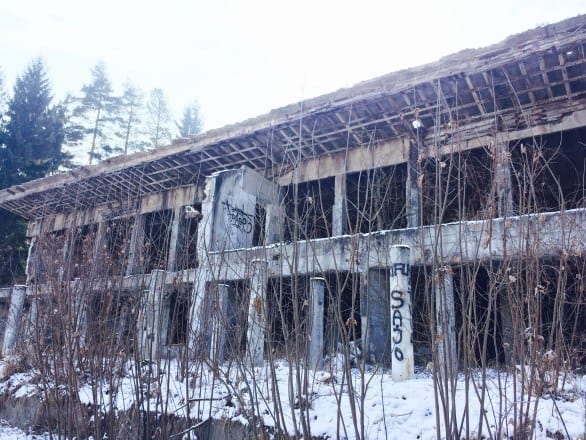 What comes to your mind when we say the palace of president of Yugoslavia Josip Broz Tito? Elegant building, painted ceilings, mosaic, gardens…. We also were thinking like this. Though when we arrived to place, all we have seen were ruins and graffities.

How to reach it

Because of lots of vandals we would like to save the location of Tito’s palace in secret. Though we can say that it’s located not far from Sarajevo, in the park of Stojcevac city.

Well, if you really want to reach it you can always ask locals in the park where it is. They are supposed to know. (Though people from Sarajevo itself rarely heard about it.)

Because of the big secrecy of the palace you can’t find in Internet any information about when it was built and by whom. Locals were also failed to answer on these questions.

Though from what we know is that this palace was built for security purposes: to save Tito from enemies in case of the war. His official residence was located (and still is used by president of Croatia) in Zagreb, Croatia. The building was formerly known as Villa Zagorje or Tito’s Villa.

As we have mentioned before – first what we have seen after arriving on place was ruined and burnt house that completely doesn’t look like the royal palace of the great president of Yugoslavia. Only wreckage dominate the landscape from the up of this hill.

We go a little bit inside the building and what we see behind is a small indentation. There we can notice that there are stairs going down-down-down(maybe 1000 stages).

After we have finally overcome stairs we were swallowed by the darkness. Thanks to the excellent acoustics we were hearing the voices of our travel companions: the only one way for me not to fill completely scared in this place with the strange atmosphere.

Down was the tunnel, really long, about hundreds of km. I think for one hour that we have spent there, we have seen just quarter of it.

Inside you can find lots of pointers of where to go, and how to return. Though we have never trusted them, and have used our own by putting simple bottles pointing from where we came.
In fact the ground – not floor – was almost all covered by every kind of garbage. Meanwhile dark, winter cold and humidity were doing their best to test our mind and our bodies.

After half an hour inside we have found out that tunnel has the second exit that leads to the park and other ruins. Nevertheless we have decided still to return to find something more…

After one of the corners we have found the small room with the stairs up. The stairs were really old, and really high, that’s why we didn’t dare to go up. Our friends later said us that their acquaintance once went up, and the ascent took him like 20 minutes, and what was waiting him up…..Helipad!!!

Also in this room with the stairs we have found some strange dead animal. People say that it is a dead wolf which was sacrificed, though for us it looked like a normal dead dog.
[metaslider id=1854]