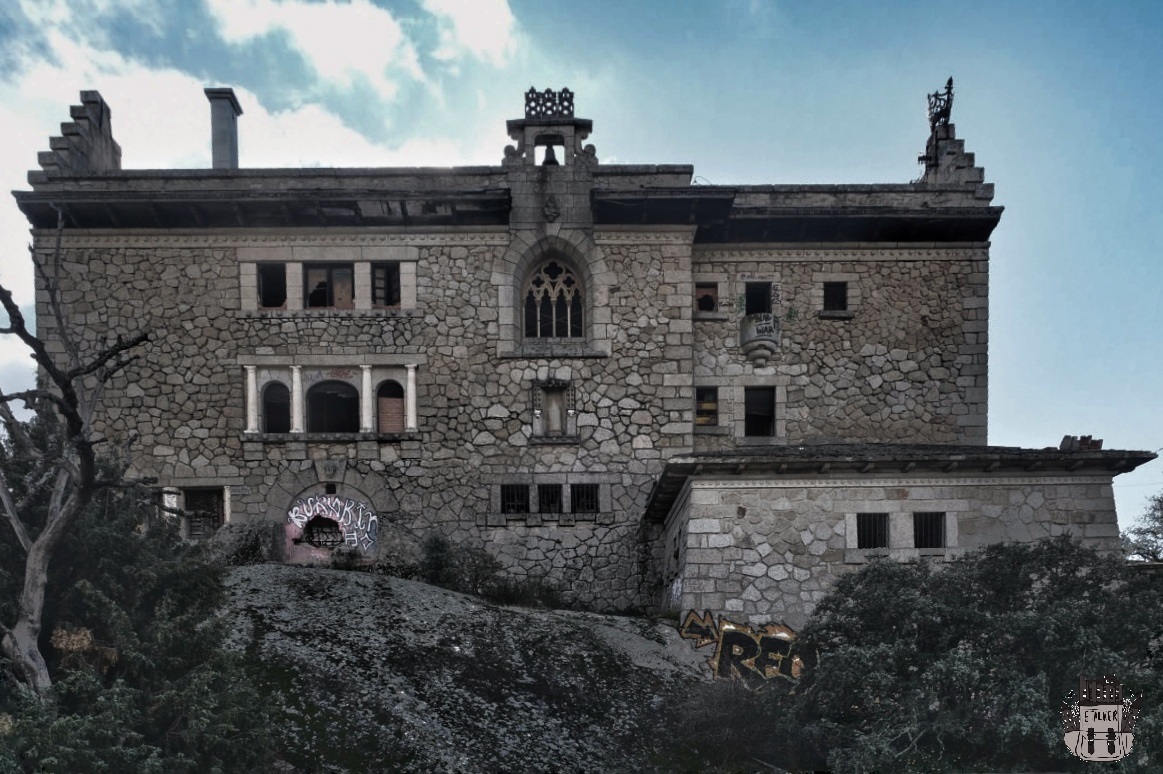 In the Spanish countryside, just a 20-minute drive from the cosmopolitan centre of Madrid lies the jewel of the Canto del Pico Estate.

This property of 100 hectares and a 9 km perimeter is located between the Sierra de Guadarrama and the capital and connects the two districts of Madrid: the agricultural area of Guadarrama and the metropolitan area of Madrid. The entire plot is currently bordered by a stone wall about two metres high.

Families and groups of friends often enter the property through the long winding paths that lead to huge granite boulders and centuries-old pine trees. There is a rock-climbing opened gym not far from the estate and following the paths one can reach the town of Torrelodones. Within the estate, one can find trees and shrubs characteristic of Mediterranean vegetation, including holm oaks and cork trees. The estate on which it is located is a hunting reserve belonging to the Community of Madrid.

The Canto del Pico Palace is an eclectic style building, representative of Spanish art from the 12th to the 17th century. The Gothic columns and capitals come from the castle of Curiel, the doors are taken from the Salesas Reales convent in Madrid, the wooden ceilings come from Curiel de Duero, Toledo and Teruel and several ornamental motifs from the Collegiate Church of Logroño and La Seo de Urgel.

The building also housed the Gothic cloister of the Casa del Abad, from the Cistercian monastery of Santa María de la Valldigna (Simat de Valldigna, Valencia). After a long claim process (started in 1998) by the Generalitat Valenciana in 2006, it was purchased by the company and a year later moved to its original location, leaving no replica in the building.

About 500 metres from the building are the ruins of the garden, also designed by José María de Palacio y Abárzuza. Inside this space, several architectural pieces belonging to the count’s art collection are still on display.

In addition to the main house, there are other buildings, such as the Casa del Guarda, the Peña Bermeja, stables and a building used for beehives. In the recreational areas, there are some remains of fountains and ponds decorated with sculptures, stairs leading to viewpoints and terraces with columns.

The mountain on which it stands is also known as Canto del Pico and the building takes its name from a granite cliff in the shape of a bird’s beak that stands nearby.

The palace was designed in 1920 by El Conde de las Almenas, third Count of Las Almenas and first Marquis of Llano de San Javier, as a house-museum to house the art collection of José María de Palacio y Abárzuza (1866-1940). The building, constructed mainly of granite, was worked by local master stonemasons such as Mazarredo. Work lasted two years, from 1920 to 1922, and was directed, according to some sources, by engineer Antonio Ramos, a personal friend of the owner, and Torrelodones master builder Prudencio Urosa.

The Count of Las Almenas, a famous collector of antiquities, reused in the design of the Canto del Pico a large number of architectural elements he had collected throughout Spain.

Numerous personalities from Spanish history have passed through the palace’s walls. On 13 December 1925. the statesman Antonio Maura (1853-1925), according to a commemorative plaque installed inside the building (“Descending this staircase, Don Antonio Maura ascended to heaven”) on one of his visits to the estate died suddenly while descending some stairs.

Death of his wife

On the death of his wife, a member of the very rich Maroto family, the count drastically reduced his expenses, having by then exhausted a large part of his capital. In 1928, his worsening financial situation forced him to auction off part of his art collection in New York.

In February 1930, the Academy of History, at a session presided over by the Duke of Alba, declares the Canto del Pico Palace a Historic-Artistic Monument.

During the Spanish Civil War, the building became the temporary headquarters (from 6 to 25 July 1937) of the Republican Military Command and a privileged observation point from which troop movements could be seen in advance. Indalecio Prieto (1883-1962) and General Miaja (1878-1958) used the building as their headquarters, directing the military offensive to free Madrid from the pressure of rebel troops, leading to the Battle of Brunete.

In the war, the Count lost his only son Ignacio del Palacio y Maroto. This event caused him severe depression, leading him to bequeath the estate and palace to Francisco Franco Bahamonde (1892-1975) in 1947.

In 1955, the Supreme Court granted the estate and house exemption from urban land tax, as it was in fact a state museum.

After Franco’s death, the estate passed to his heirs. His niece, María del Mar Martínez-Bordiú, Merry, and the journalist Jimmy Giménez-Arnau settled there in the late 1970s. Subsequently, the building was abandoned for thirteen years, a period during which the property fell into a state of semi-ruin, as recorded in the 1988 property register. In this same year, the English company Stoyam Holdings Ltd. purchased the building, which was by then completely stripped of all furnishings, furniture and valuables, vandalised and defaced.

Since the 1980s, the building has suffered a multitude of thefts, robberies and destructions of its sculptural and architectural elements and all the works it housed. On 24 July 1998, a fire partially destroyed it, although in the end only the roof was affected. In vain was the attempt to bring the book collection into the municipal building.

The palace is declared an Asset of Cultural Interest and is included in the Red List of Endangered Heritage that the association Hispania Nostra started to draw up in 2006, given its delicate state of conservation.

According to some government sources, the palace should have been rehabilitated along with other buildings on the property, such as the stables, fountains and sheds. The company is still in constant dialogue with government agencies and those responsible for planning and development to convert the palace and surrounding buildings into a – alas – luxurious and exclusive boutique hotel.