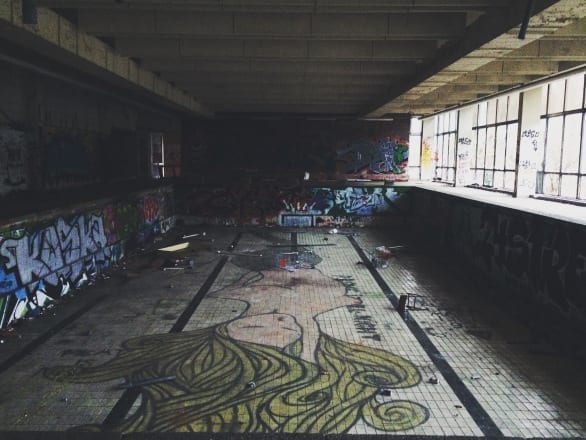 The pool is located near the metro station Pankow. Get out from metro, walk by Berliner street, and then turn to Wolfshagener street. There is a fence around swimming pool, go around and try to find the hole to come inside. The building itself is not barricaded at all, so it is easy to come inside.

Pankow Schwimmhalle was built during the heyday of the GDR times. It was opened in the 1970s as the most modern swimming pool of entire East-Germany (it had a modern water filtration system and energy saving appliances). But after reunification of Germany for some reasons the number of visitors started decreasing. The last visitors swam here in the beginning of millennium, and then in 2001 swimming pool was closed.

As always there were many argues about reopening the swimming pool, though… the main obstacle to this are money, which Berlin government does not have.

The swimming pool has its own atmosphere. It would be great to come here with friends and drink some beer inside, though I myself came here alone, and it was also cool.

On the ground floor there are two swimming pools: one for kids, another for grown people with a water depth of 1.80 m. In addition to the swimming pools there is the modest Sauna in the sellar!

In 2013 the swimming pool has come under an arson attack, that’s why many windows and glasses are broken. As well as building itself is in really bad condition now.