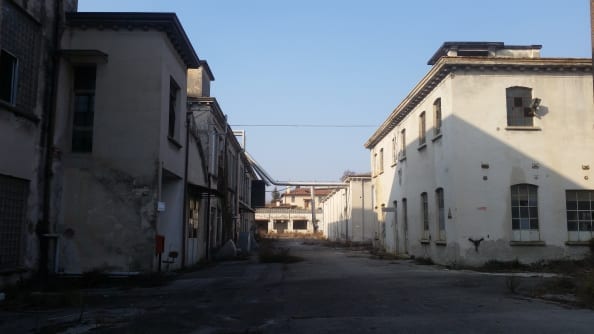 The large red brick tower stands motionless, holding the breath, in all its height pending recovery from humans who left her alone….

Today we are in Montebelluna, town and comune in Veneto, Italy, approximately 67 kilometres northwest of Venice. The spinning is situated between Via Risorgimento and the train station.
History
In the case of the former spinning Monti, the story should be read going backwards. It all began in 1934, with the purchase of the factory in order to support the entire cotton processing cycle. A happy period before the Second World War. Economic growth and love of country, as reported with the motto of Gabriele D’Annunzio: “Even with the tiny daily work you can make great the homeland” chosen by the owners. In its heyday hundreds of workers were working and kilometers of cotton and synthetic threads were produced.
Shortly after, the conversion to synthetic fiber yarns. Since 1950 then left abandoned. In 2003 the production was transferred in India and workers moved there. Many redevelopment projects were tried but, for over 10 years, the factory is left in decay.
Description
A road cut in horizontal way the factory in 2 parts.
From one part the stores, from the the other one buildings (the factory) used as working place where previously was produced cotton.
1)STORES
Most of the sheds are empty, in one is not even possible to enter because of a locked door.
Just one building is opened to “visitors” and what you can find inside are objects, tools and papers everywhere. In a room there is a narrow passage which leads to the undergrounds but closed by a “wall” after few meters.
In a metal box on the door there are lot of keys with their respective numbers and name of the rooms. Then, right next there, some chairs, tables and even a pair of boots are left by now suffocated by the dust.

Another entrance from outside let us to reach the 1st floor. Tools, gears, equipment… a room full of objects! Left on the floor or still resting on  shelves and tables there are paint cans, electronic and mechanical components, electrical wires and not, documents, wheels, tool box … in short, a paradise for a mechanic or an electrician ahaha.

On the floor a big hole fortunately signaled by the orange cones.
In the next room there is the electrical system reported by a yellow sign written on: “danger of death”.

2)FACTORY
Also this part has undergrounds with some stairs which guide you till down but, nothing of special. All walled and the only passages let free are too small to squeeze through. The main building has easy entrances everywhere, from windows and from gates. It is built on 4 floors and on the top there is a roof ( kind of open air floor) from where you can enjoy a spectacular view of Montebelluna. It seemed they even tried to have a roof garden on the 3rd floor with trees and grass :D.
The factory is mainly divided in 3 corps: 2 big rooms at the sides and a central part used as space for the elevator and in order to separate.
Most of the places at the ground floor are dark so you would need for sure a flashlight or a torch. In what you will come across are big, enormous and spacious rooms. In one of them is completely dark and, on one side of the wall, only red doors shade lights reflecting that one from our torches.

Behind the doors a huge machine – maybe 25 meters long – and other stairs leading to the underground. Many different machines used for the manufacturing of cotton are situated in all the site in different rooms. Big and small doesn’t matter, all of them share the same destiny: the time doesn’t spare no one.

Each of our step lift enough dust to make us sneeze every 5 minutes.  Going upstair we bump into containers, cleaning objects, broken phones, maps, floppy disk, documents, springs, carts…
Meanwhile, from inside the plant,  we observe the lonely red tower positioned in the middle of the whole factory, waiting for the next use.
A huge abandoned factory which deserves at least half day to be visited all.