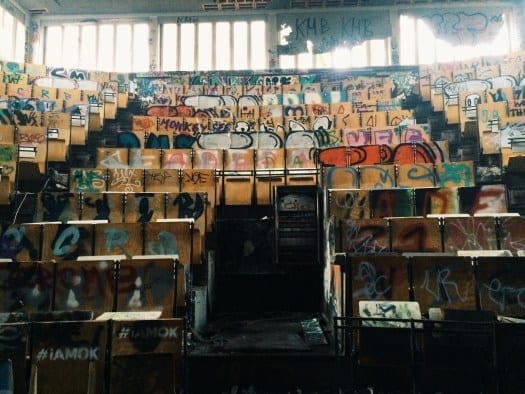 -Good morning, pupils! Today after lessons we will  go to the morgue and will carve corpses for your first time. Prepare your scalpels!

Today STALKER is in Berlin, one of the most interesting cities for abandoned lovers. And today we will explore abandoned Anatomy University that is located in front of Freie Universität. You can reach it by metro Dahlem-Dorf. Go out from metro, and keep on walking by Königin-Luise-Straße till you see beautiful university, turn your head right –  and here it is.

Be careful of people around (we are still in Germany), they can easily call to police. Though when we have just jumped the fence over, there was one police car in the near, but it seemed like they didn’t care much.

In 1929 it was decided to build the present building of the Institute of Anatomy of the Freie Universität Berlin (FU), and just in 1948 the building was opened for students. It consisted from the auditoriums, offices, laboratories on the upper floor, and in the cellar there were the secession tables and cooling chambers. They wanted to create here a place where students will not just get theory, but at the same time lots of practice. Students were taught here for everyday life, in addition to the tasks of a pathology.

In 2003 the facilities of the medical faculties of the Freie und Humboldt-Universität merge to the “Charité – Universitätsmedizin Berlin”, that’s why already from 2005 the Anatomy University lays abandoned…

In 2008 big German company bought the land to build the huge discounter market here. Though when concrete plans were announced in 2010, the district made a dash for the plans and forbade the investor to approve them. Both sides went to the court, and in 2012 the company has lost. After that peace is given to this place…

All the windows as well as doors of the building are broken that’s why everything is really easy accessible. The building itself is big as, well, any university should be. It consists from 3 floors up, and one floor down.

The biggest interest of the building can cause the lecture hall, where still chairs are staying. Though some of the chairs were burnt by some vandals, but the rest of the room is quite in a good condition.

In other rooms you can’t find any chairs or desks just couple of wardrobes, and some papers.

Other interesting place – demonstration cabinet. In the middle there is preparative table where teacher was showing to students some practical things, and students were staying around him.

Another room is completely dark, probably here was photolaboratory. Though you can find here an inscription that dead people were here, probably somebody’s joke.

Going further we have found the exit to the roof, though we didn’t risk as the building is really old, and even inside it is a little bit dangerous to stay as there is a possibility of ceiling being collapsed.

The most interesting part was ahead…the cellar. Here were some sinks, probably where organs were washed before preparation. After that we have found room with a huge thermal insulation door. Inside was dissecting table in mint condition, and some fridges for three corpses. In other rooms we have found more fridges. But luckily we haven’t found any chopped bodies here hahah. As well there is no more putrid smell, all is gone.

The place was really strange for me, I could never imagined that students could so easily study together with the dead world downstairs… Though, it was like this.