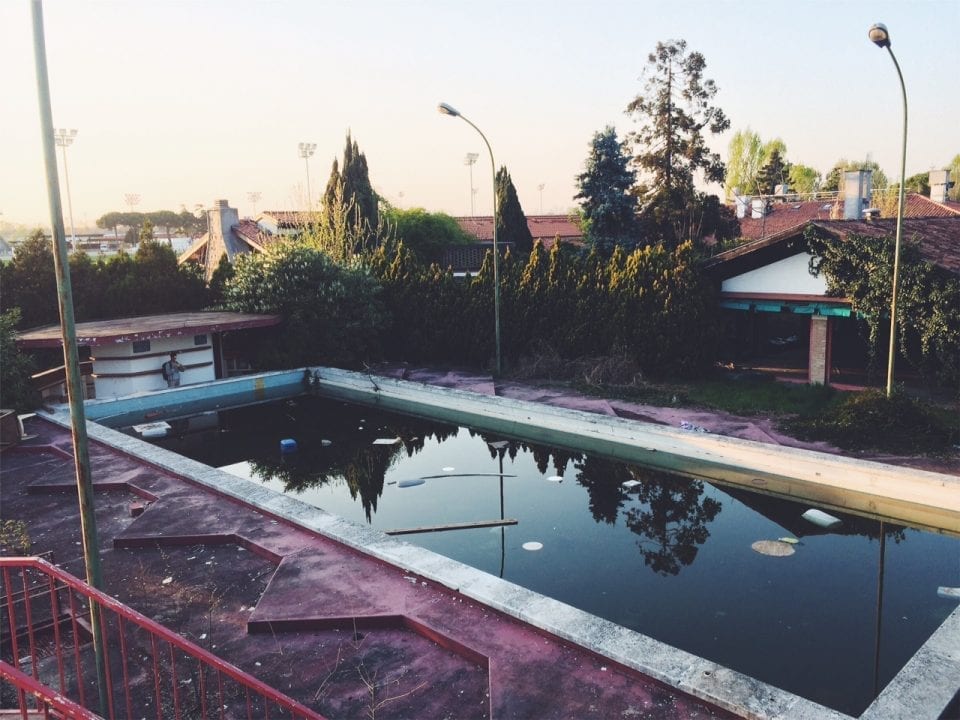 Furnished bedrooms together with bathrooms, outside and inside swimming pool, tennis court. This is what waiting for you in the hotel “La Padovanelle”, which used to be one of the best hotels in the city, and now stays abandoned.

Hotel is located on the street Chilesotti, a little bit out of Padua. You can reach it by bike, as we did, or by bus. Hotel is not fenced, so you can get inside through multiple holes in the windows.

The hotel-restaurant “La Padovanelle” was built in 1966. It was one of the most beautiful hotels in the city, many famous people, such as the Benetton family, the Marzotto family, or one of the richest man of Italy Leonardo Del Vecchio, stayed there. As well as some former politicians.

The hotel included 40 rooms, swimming-pool, tennis court, restaurant, sauna, gym… Everything, that made this place very comfortable to stay in.

Though, to some incomprehensible reasons, less and less people started to stay in this hotel for a night. Due to the lack of customers in 2008 the hotel was closed. Though it is closed now, you can still book the room in several sites in internet.

The son of founder tried to sell the hotel for a total value of 14 million euro, though nobody seems to be interested in such a deal.

Today hotel is a home for homeless people, drug addicts, and some misfits, who are looking for a place where to stay for a night. Actually, it is the best place for them! You can still find inside beds in a good condition, and even with matrasses, some sofas, and tables. Unfortunately, there is no more light inside, but they are using candles instead. (What a romantic!)

The police have identified that this place could be dangerous and made several controls inside this abandoned area. When we were inside the hotel there were already no homeless, though their traces are still there, and maybe they return back when the sun goes down…

Outside there is hippodrome that is still alive. People are riding their horses, compete, and most likely not notice that so near is located an abandoned hotel. Not more the best one in the city.