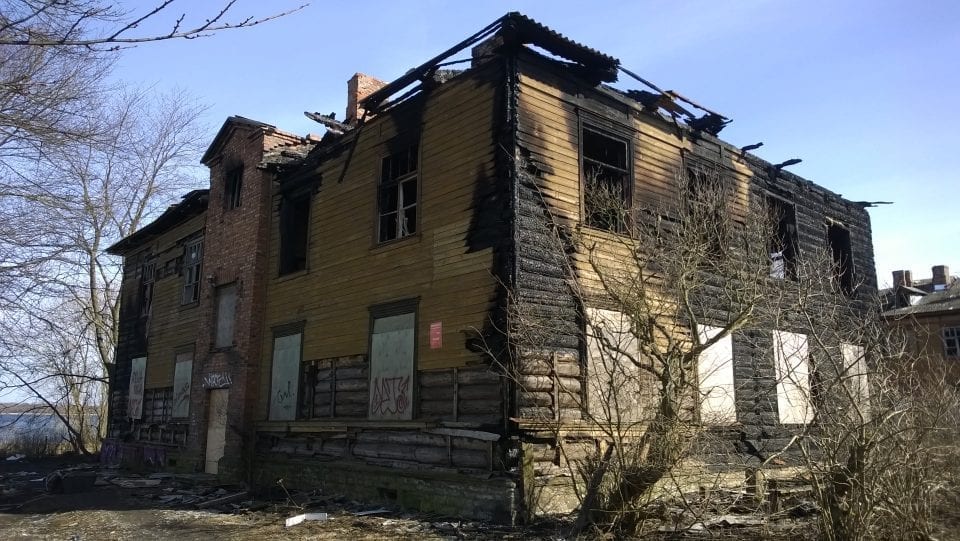 1953-1985, Soviet Union, Tallinn, Estonia….it was not many years ago. Thieves, murderers, rapists, in short, people of the worst mold, Kopli liinid brought all together the outcasts of Tallin.

Location and how to get there

After the old Manor in Lithuania, and the secret town Skrunda-1 in Latvia, today it is the turn for Estonia.

Kopli is a residential area of Tallinn in the northwestern part of Kopli Peninsula. It is very easy to get inside:  no fence, no gates, no guards – just an open space where everyone can come.

Kopli peninsula has a powerful history. In 1912, Russia announced its empire and Tallinn became its main naval base. Right in Kopli they began to build the empire’s largest shipyards. Wooden houses, which now look like half-burned, were built for the factory workmen and masters.

In 1916 the first three battleships were ready. This urban region was very advanced for that time, and it completed one project after the other: a hospital, a sauna, a canteen, shop, clubhouse, schools, churches, police stations, post offices, theater, laundry and other various services.

After the yard asumiks was built, Kopli citadel had many others roles. It became the burial place for Russian soldiers who had died because of typhus, and haven for escaping Russian intelligentsia, who fled from the Soviet terror to Estonia.

Starting from 1930s, after Tartu Peace Treaty in 1920, Kopli peninsula became one of the most beautiful districts in Estonia, plenty of events and initiatives took place here. This district was later called professors village because here was located the Technical University, and professors were living inside houses of plant managers.

But then came the war, and once again Estonia became the republic of Soviet Union. Repair base for military ships was restored in 1947 under the authority of the Ministry of the shipbuilding industry. In 1951, it was given a new name to the plant, Mailbox No. 1083, like the name of one Vonnegut novels, and at the same time streets deportation began, which was called later Kopli lines.

Initially this place was used for repairing warships but later, starting from 1960s till 1990s, mainly fishing vessels, tankers, cargo and passenger ships were repaired here. Resettlement of this area increased crime changing North-Tallinn’s reputation and now, at distance of almost 30 years, we have become accustomed to hear news rather about house in fires and homeless families in this area.

Last inhabitants were put out from Kopli lines in 2015, and from that time a demolition started. The company Fund Ehitus plans to build a new neighborhood for 12 years. It seems that new area will be really modern and chic. Lucky Kopli lines, finally!

Stuck between the line of the tram and the Tallinn Bay a big open space plenty of half destroyed, roofless and burned houses appears before my eyes.

Firstly, I had a walk all around the rows of houses…. one, two, three times till when I convinced myself to enter inside a random one. Door was not barred, so I was able to easily explore what was a landfill in miniature. Garbage on the floor, on the tables, broken chairs, burned walls, bad smell. The dwelling, as all the others, had ground and first floor. The first one was not safe, with a floor mostly burned, happened more than one time that I sank into the wood with my foot. Tools, bed, cots and poster were a mark left by the homeless life.

What was not enough clear is why, up all this garbage mixed with empty cans and clothes, even books (mostly written in Russian) were there. “A book could be a multipurpose object!” that phrase I remembered from an apocalypse movie, but in this case I was wondering for what could it be used here. Corridors remembered me the movie Silent Hill, with all the wallpaper dropping down and some even floating in the air. Meanwhile a rat run out quickly from an accumulation of garbage, wondering why, at this time of the day, there was someone at “home”.

Going out from the house I have met two other professional photographers, explores as me of this abandoned place. They would write about Kopli Liinid on the local newspaper next week. Alongside all this decay, however, colorful doors and colorful rags left dropping out of windows, stood out as violets in the underbrush.

Peluches and dolls, half broken half dirty, seemed to be the only “living beings” among the few tourists and homeless who were there.

The coast, which skirted all along the district, was a world apart…silence, waves, sun and seagulls. Sitting on a rock and with my foot immersed in the water, I was thinking at how could be the life here, and how was it in the past.

The slum is being transformed for very different reasons into a ghetto accommodating for low-income townspeople, who consider themselves out of society and have a behavior toward foreigners who prefer to repel them.
[metaslider id=1872]

The endless degeneration of the Kopli Lines as a living environment has led to a situation that there is nothing significant here to save anymore, at least in terms of the community.