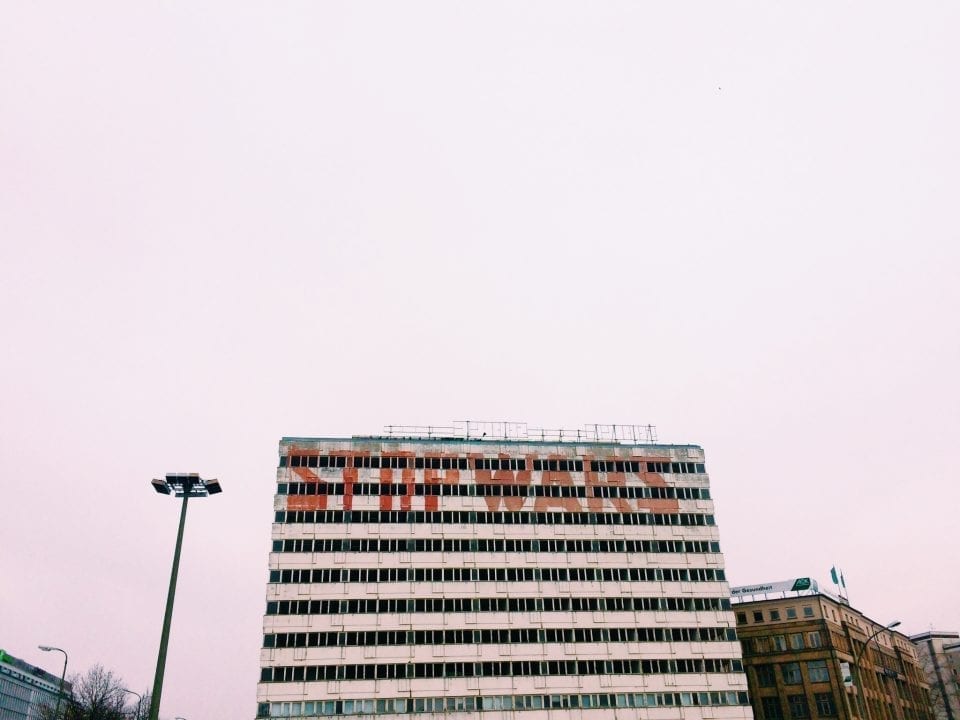 Today STALKER will talk with the creator of the most famous and the first blog, which writes about abandoned sites in Berlin. It bears the same name – “Abandoned Berlin“.

Irish blogger Ciarán Fahey now celebrates the ninth anniversary of his life in the capital of Germany. From the beginning he started to collect material about countless abandoned sites in Berlin that later were displayed in his blog: abandonedberlin.com, and in his book “Verlassene Orte/Abandoned Berlin”. Ciarán and his blog are quite famous in Germany. While travelling around some abandoned sites in Berlin, we have met some other stalkers. And there was always just one answer on the question how did they get there: “Abandoned Berlin”.

We decided to talk with Ciarán, who is the pioneer of blogs about abandoned places who is one of the biggest connoisseur of abandoned Berlin, who knows almost everything about places he visited: their past and how do they change in future. About this in our interview.

-I wanted to ask you about what do you think: put or not put the location of abandoned place? Why have you in the end decided to put?

I initially published the address of the first place I wrote about, Spreepark, the abandoned amusement park, because I wanted to share it with other people who would get as much enjoyment from it as I did. I thought it was a shame to have this wonderful place all locked up and hidden, with no one to take advantage of it. I really just wanted to share it.

I continued like that because I think the lifetimes of these places is finite and I believed they should be enjoyed while still possible. I don’t subscribe to this notion of keeping places secret – knowing about a place and hiding it from the world as if it were mine to keep.

I don’t own these places, nobody does. They’re free, abandoned, accessible to all, and I feel they belong to everyone too.

If you have a beautiful painting, is it better to keep it locked away from the world in a hidden room, or do you show it to the world for all to enjoy? I think it’s better to show the world. So I tell people how to find these places. I consider it a public service.

-Do you have any doubts about your decision? I have been in some places that you advised, and some of them now are ruined, or significantly destroyed by vandals. I know that there is no direct link between your blog and these destructions. But do you by yourself sometimes regret that you put the location of the place, and later, when you visit the place for 2d/3d time, you see how it changed after that due to some visitors? If you will find a really-really beautiful abandoned castle, with things that could be 200-years old…will you put a location of that place? Or will you be afraid that it will be destroyed?

I’ve no doubts at all. I did consider it for a long time, I thought about it long and hard, but I believe these places are all doomed in some way or other anyway. The vandals who wreck these places don’t look up their targets on the internet – they’re too stupid for that – they just wreck what they find.

Of course I see how places change too, and it pains me to see how they deteriorate, or if some idiot has wrecked the place. However, I think it’s a risk worth taking.

To give you a recent example, I didn’t post the last place I wrote about for a long time. The houses were too full of personal memories and treasured items that I didn’t want them to get wrecked. I hesitated a long time. But on my last visit, even though I hadn’t published its story or location, I found it badly damaged by vandals. A piano was all smashed up, everything was thrown around. Then I learned that the other house is to be torn down so apartments can be built its place. So I didn’t hesitate anymore. I posted the story and location and advised people to go see them before it’s too late. All these places are doomed, as I said before. I think people should see them before they’re gone.

-You are visiting some places that are forbidden to visit, and your name is not a secret for anyone. Have you ever had problems with “officials”/ police because of that? If not, are you afraid that you can have them in the future?

No major problems yet. I don’t consider what I do to be a crime as all these places are abandoned, literally thrown away by their owners. They’ve given them up and they belong to the world now. But of course I’m aware that I could get in trouble with officialdom at some stage. Officialdom is always looking for ways to make life difficult for us.

-Why overall Berlin, except the reason that you live there? Is there any so much interesting city with abandoned places as Berlin in any other cities of Germany (Europe/world..)? Do you have a plan to discover them and write about them a new book?

I wrote about Berlin and its surroundings simply because I live here. It was a lucky accident for me to discover so many abandoned buildings after I moved here. But Berlin’s history also means it’s full of amazing stories, many of that stories some people would rather forget. Its turbulent past, the Nazis, war, Cold War, partition with the Berlin Wall and then the massive upheaval when it came down all provide a rich mining field for tales of tragedy and sheer waste.

Every abandoned building is a waste, a lost opportunity, unfulfilled, and Berlin is absolutely full of them.

-For you, what is the most important in abandoned place: it’s history, architecture, “available” things inside? Or something else?

The most important thing for me, as a journalist, are the stories, the tales behind each place. Who lived/worked/loved here? What happened? Why was it abandoned? There is nearly always a tragic story behind it, like the story of the old man who was half-starved to death by his nurse in the last house I visited, or the Jewish family persecuted by the Nazis (and then later East Germany when it refused to acknowledge their crimes) as Richard and Else Lehman were murdered. Their story is here.

Then there was the woman who told me her grandfather’s story after I wrote about an abandoned villa in Berlin. I didn’t publish the location here because she asked me not to, and she was so grateful to share her tale and tell his story. She even sent me pictures of him and the house. You can find that one here.

The stories are without doubt the most important thing in an abandoned place for me. I want to document the stories before that link they have – the abandoned place itself – is lost forever and their history is forgotten. Abandoned Berlin is my way of preserving that past and their memories.

Yesterday we have also published our top abandoned places in Berlin. In case you have missed – you can read it here.