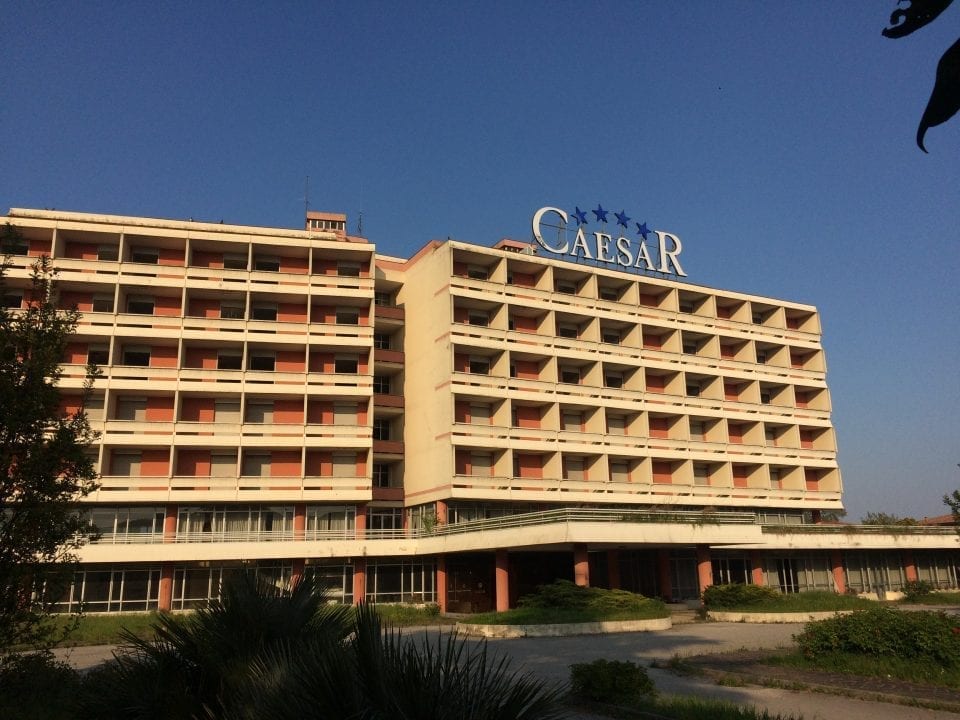 Have you ever had a strange dream to visit a popular city where half of the hotels will be abandoned? What a strange dream, which of course you never had. But such city really exists, and you can find it in Italy.

Today we are in the Italian city Abano Terme. City, which is famous for one of the hottest in Europe springs (the temperature of some could reach up to 87 °C!!!). No doubts that such city attracts lots of tourists who want to treat themselves. The hotel chain is very developed in this city, but on a par with working hotels there are around ten abandoned (in a city where just 20 thousands people live!).

In today’s trip, we will visit three different hotels. All of them are very easy to access (just never go in if there are people around. Though they are abandoned, they are still under private property), as well they are located really close to each other. 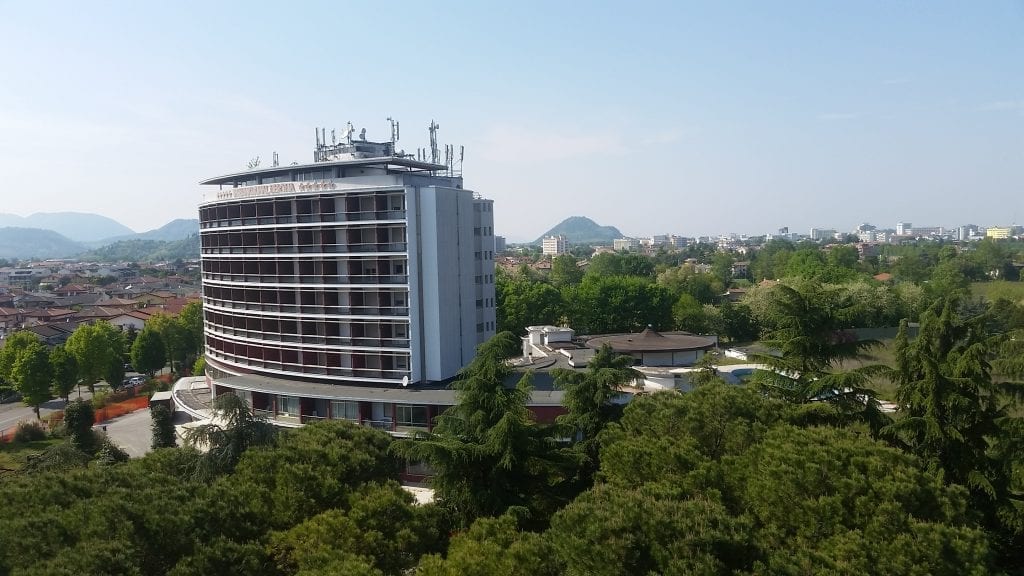 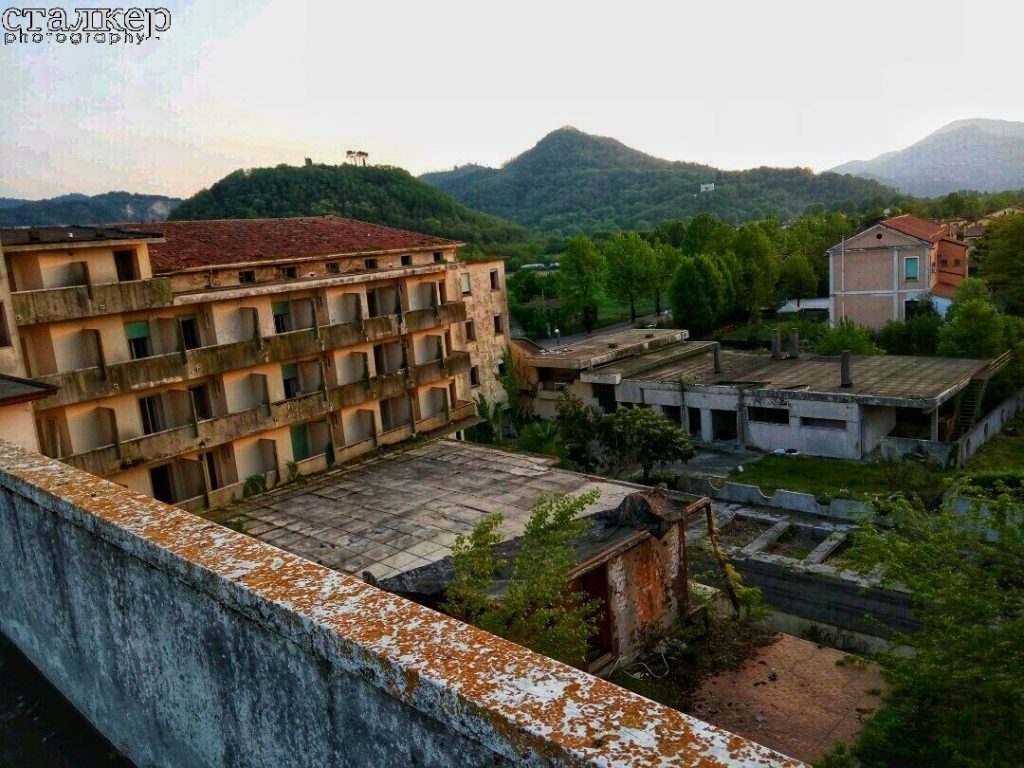 All three hotels have the same reason of failure: the financial crisis of 2008. Most of the hotel owners have become bankrupt, and that’s why they couldn’t continue their business.

The four-stars hotel was owned by Enpam (the National Medical Assistance Body), and just a few years ago it was a pride of the center of this city. It is located just in front of the central park where people are gathering together with their children.

If you search in Internet for a place to stay in Abano, you can still find the description of this hotel…. “An elegant hotel with 135 rooms surrounded by a park of 40 thousand meters in an enviable and evocative context”. There are still some references that you can find. 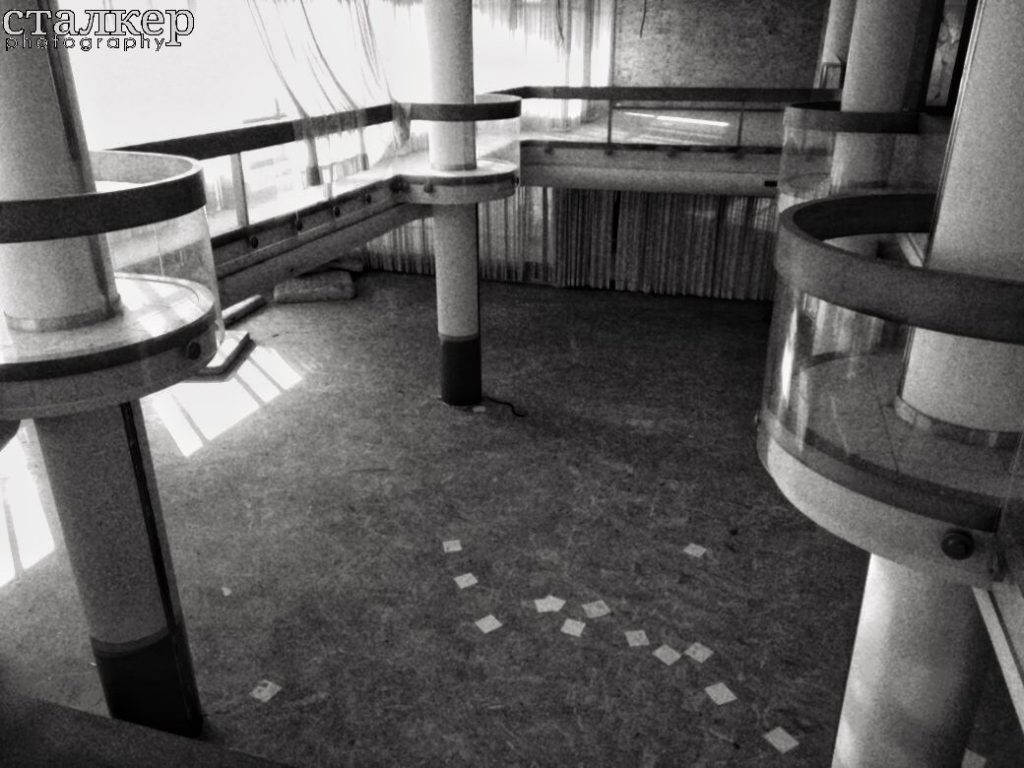 “I have stayed with my husband in this hotel for a month in summer every year from 1982 to 2007, and also every Easter and Christmas. I liked it not just for the care but because the staff made it the best hotel in the world. I knew him when he was luxurious, I loved him even when he became deprived. Someone wants to reopen it and customers will come here from the first day,” said one of the visitors.

There is even the site of this hotel, where you can find, how it looked like 10 years ago.

In 2014 there were some talks to transform the hotel into the new home for the hotel “Pietro d’Abano“. Now the cost of hotel is estimated at around 4.91 million euros.

But let’s explore this hotel and see what is left. First of all – the big swimming pool, full of the rain water. Not the only swimming pool because, right close to the main one, another smaller but covered by a roof.

From there we moved inside the hotel… In total there were six floors and a long and endless scale. Phew worth the run till up from where we had an amazing view of Abano Terme: the park and all other abandoned hotels were easily visible! Be careful my dear stalker because also you will be particularly visible! The only shelter given was the enormous Caesar script: a letter for each of us:D. 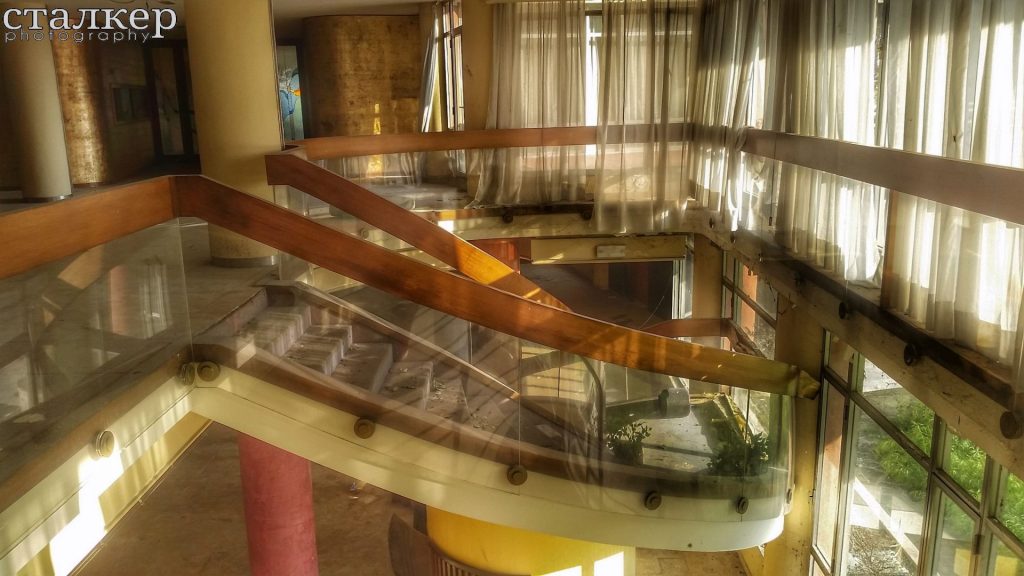 Inside the “glass corridor”, which was running right out of the main building, we ended in the salon, were also an amazing sauna shaped as a cave surprised us. Time finally to relax and enjoy the life!

We have found then a room full of new and old TV’s: we can see how the progress developed. In the same room many keys strewed on the floor used to open the almost 300 hundred doors of the hotel.

There were also some mattresses – ex-traces of homeless in this hotel. Now there is no more, local people are very strict against them.

The hotel, which was owned by the Gottardo family, firstly faced with problems in May in 2005. It encountered the financial loss of 5.2 million euros. Two years later hotel was sold and reopened by Im.gest Srl.

In 2012 hotel was bought by two entrepreneurs just for 472 thousand euros (even though before price was designated as 6 million euros). Though even after that the establishment is left as a monument to degradation. New owners never announce their plans about the future of this hotel. The restructuring will cost millions of euros, let’s see if the new owners will have such amount of money. 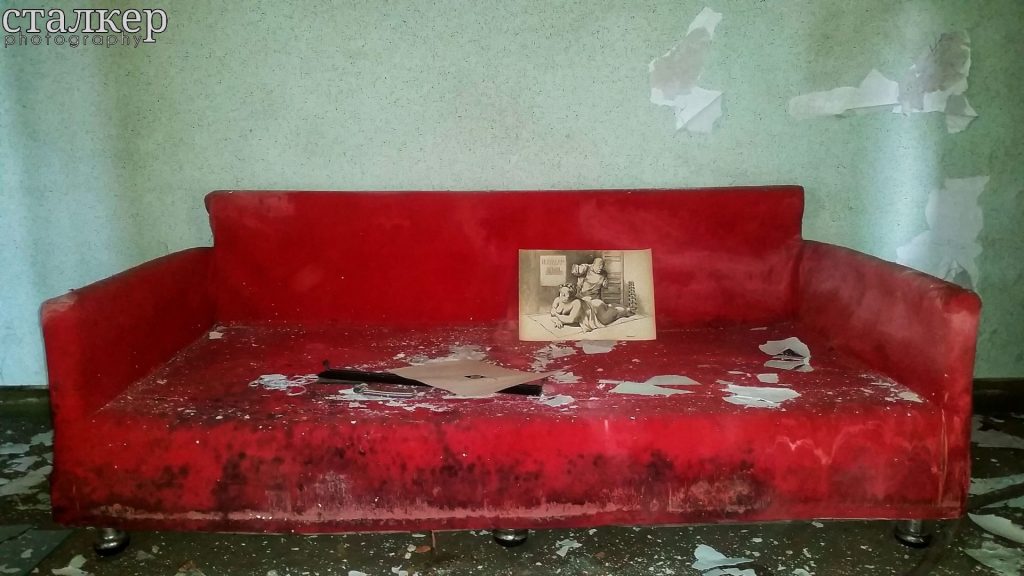 This hotel to a contrast of Hotel Caesar had much more things to advice for young stalkers. On the ground floor, we have found a mirror room with three chic armchairs (time for authentic photos!). In the next room that before was reception you meet lots of documents, old books in German, postcards from the old visitors of this place, keys from the rooms. So much interesting to study it and try to guess, how it was the life here just ten years ago, when we were kids.

After reception, as traditionally, time to check the room that they gave you! We are going up by stairs that have no pillar.

Following the stairs, we arrived at the first floor. To cross it all, we needed to come through lots of mattresses, pillows, wardrobes that were chaotically left in the corridor. We were passing rooms where we saw the total mess. Beds, wardrobes, chairs, mattresses, food, all was heaped there.

We checked the second, then the third floor and all was the same: lots of trash, but at least zero bad smell.

The most beautiful part was up! When we came to the roof, it was exactly the time for sunset… All Abano Terme was as in the palm of your hand… mountains, trees, flowers, people, and a bunch of abandoned hotels over all that.

The hotel is property of Enpam (National Institute of Social Security and Medical Assistance) and business activity managed by Golden Italia Srl. There were many times fake news about a “reopening of the doors” and the hiring of its 80 employees. Anything like that never happened.

Comparing to the previous two hotels visited before this one was looking much more luxury. Many things, memories, books, archives were left to their own devices. Even food and drinks, expired already 5 years ago, still looking in good condition. The kitchen, refrigerators, dining room, hall and reception were on the ground floor. A set of alcoholic drinks and glasses stood on the counter but no bartender was there to serve us.

Minus one floor there were the archives store where all accounts, revenues and staff were registered. Wages for workers were not bad at all. An example could be given by the porter who was earning 4600 euros net per month. Under our foot a ground scattered by old photos of the hotel during its glorious days.

Reached the first floor we found the unimaginable. Machines of all kind used for the treatment and the oxygenation of the body standing there, untouchable and immovable. All along the corridor, behind every door was waiting us something that would amazed us. At the end of the corridor another amazing swimming pool with a wood roof. Wellness paths, cold and hot showers, hydromassage….so pity that we forgot our swimsuit! 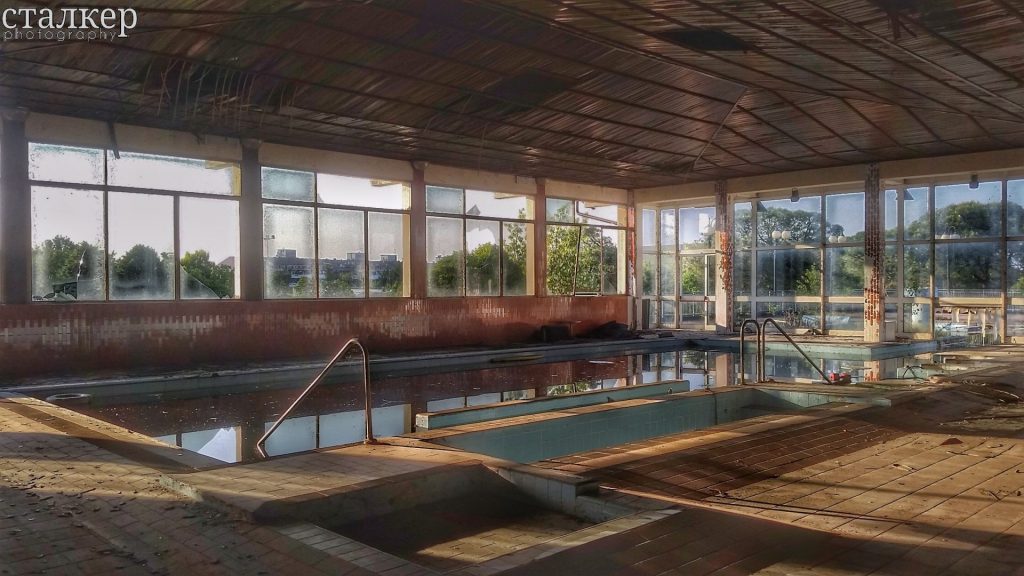 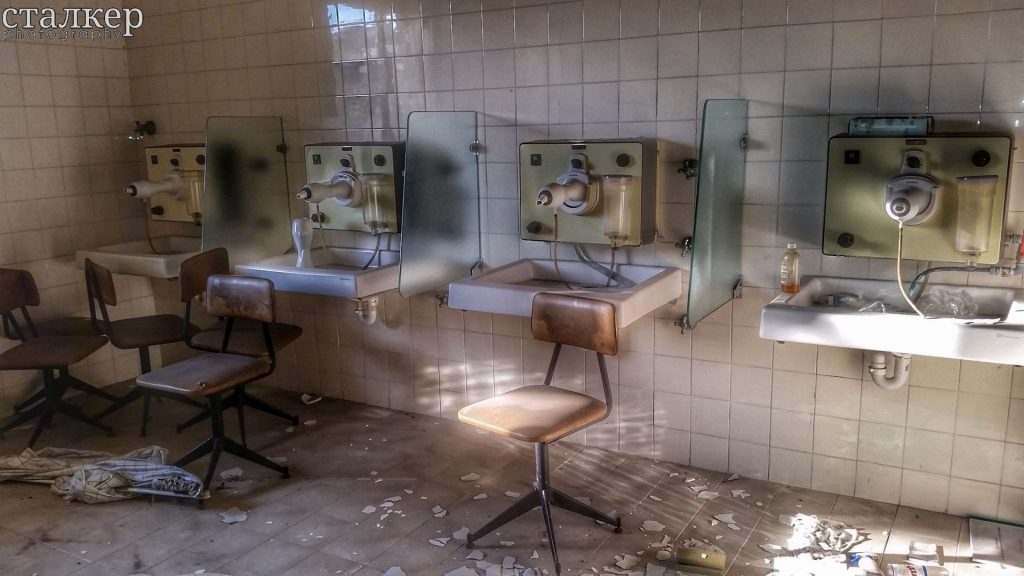 Time for rooms now! On the next floors mattress and furniture were still intact even if dirty. In fact now all room were “rented” by homeless people. Signs left by them were everywhere… At least one time per day police is checking inside the hotel looking for “unauthorized guests”. Happened many cases of theft and, an epoch one was when two thieves while stealing copper wires, blasted electricity into 3 other hotels.

Who would be interested in booking a room can check the website here…Italian, german, English languages are available. 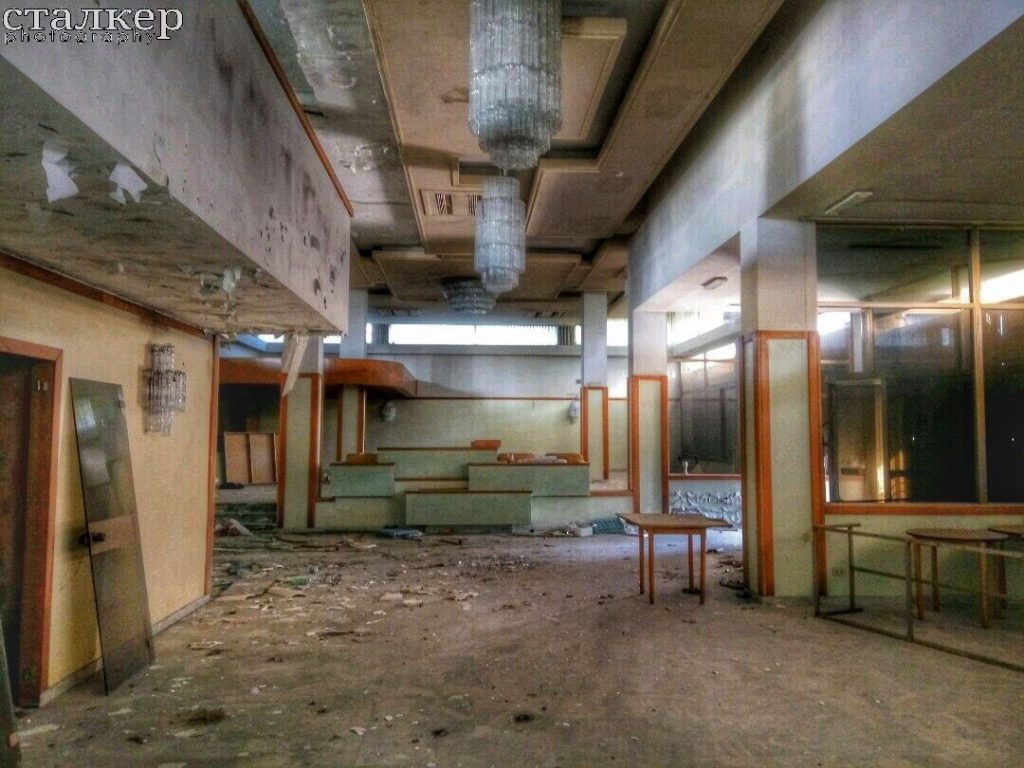