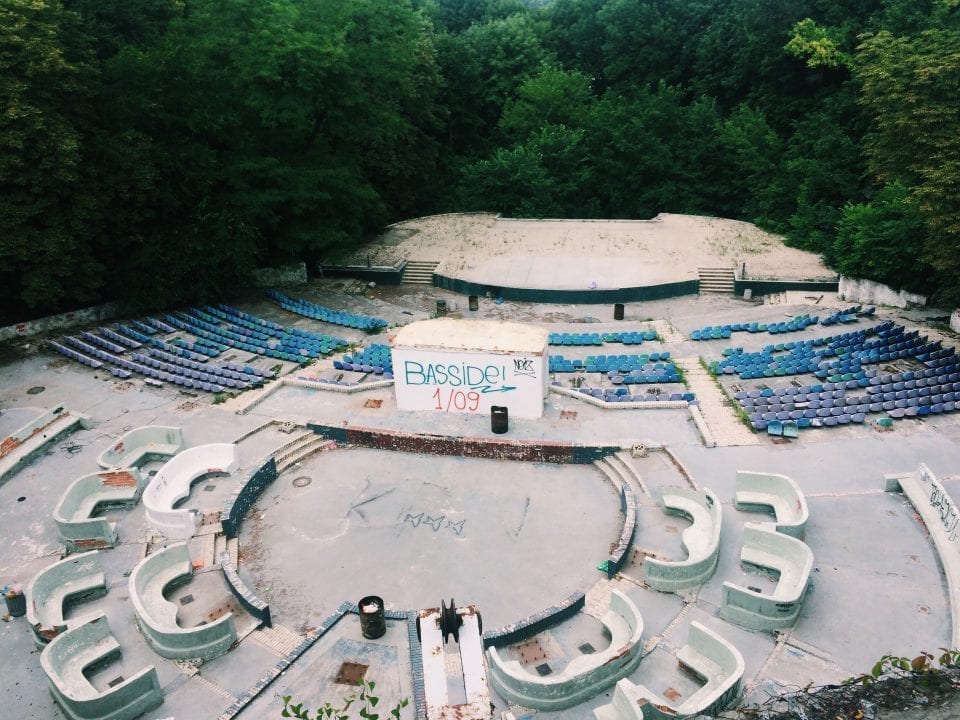 Music, history, mysticism – all is merged inside this quaint place, the history of which originates in the 12th century. Today we will visit Green theater, which is located in the heart of Ukraine – inside Kiev.

Green Theater is located near the Arsenalnaya metro station. Exit the station and walk towards the Dnieper River.

The place itself is not fenced and is not guarded, so getting inside will not make any problems.

The walls, upper and lower, appeared here in 1856 as fortifications around the Pechersk fortress, to close the water pump on the banks of the Dnieper. Both walls have internal galleries, guns and a pair of artillery loopholes.

Through both retaining walls passed an underground passage, connecting the workshops to Arsenalnaya and the water-pumping station on the banks of the Dnieper. Under the dungeon cast-iron water pipes were laid.

Also in the galleries could be placed hundreds of soldiers. In general, they tried to make the defense from all sides. The enemy would not be able to pass if he had decided to do it.

Though the enemy never appeared here. The walls have never been involved in any military operations. So gradually the erected fortress began to be used as a warehouse.

This place was used again only after the Second World War. The war was over, gradually people began to recover, started to forget the war. The government began to search for ways to entertain people.

Before the war, all the entertainment was in the center of Kiev, on the main square – Khreshchatyk, which was destroyed during the war. It would take a lot of time to rebuild the city center, that’s why the architect Alexander Vlasov proposed to build an entertainment center on the slopes of the Dnieper, in the place where the fortified point used to be.

So here they built an amphitheater for 4 thousand seats. Around there was an amusement park.

But gradually the center of Kiev is being restored, all the main entertainment facilities have been returned there. Already in the 60’s for the youth there is a new recreation area – Hydropark.

Though Green Park still operates at that time, up to the 80’s, when it finally was closed. In the 90’s the theater burnt. In 2000, it was purchased by a private company that brings life to this place: already in 2011 the theater was turned into a club that was one of the most popular places among young people. But already in 2014 the place was closed by the decision of the Prosecutor’s Office.

This place for all time of its existence has acquired several rumors. The most popular of them says that the place was laid back in 1161 year and has nine levels deep underground. True or not, but under the theater there are often guided tours through the catacombs. Psychics and bioenergetics say that these courses, along with the Kiev-Pechersk Lavra, have been and remain the center of underground communications since the foundation of Kiev.

Another myth tells of a certain “Master” who likes to frighten young people. Therefore, at the entrance to the building it is obligatory to greet him, otherwise he will be offended for such disrespect to his person. But however we did not know about this story and got out of this place alive and untouched. But many regular visitors of the theater say that they saw the Master, and some even managed to communicate with him …