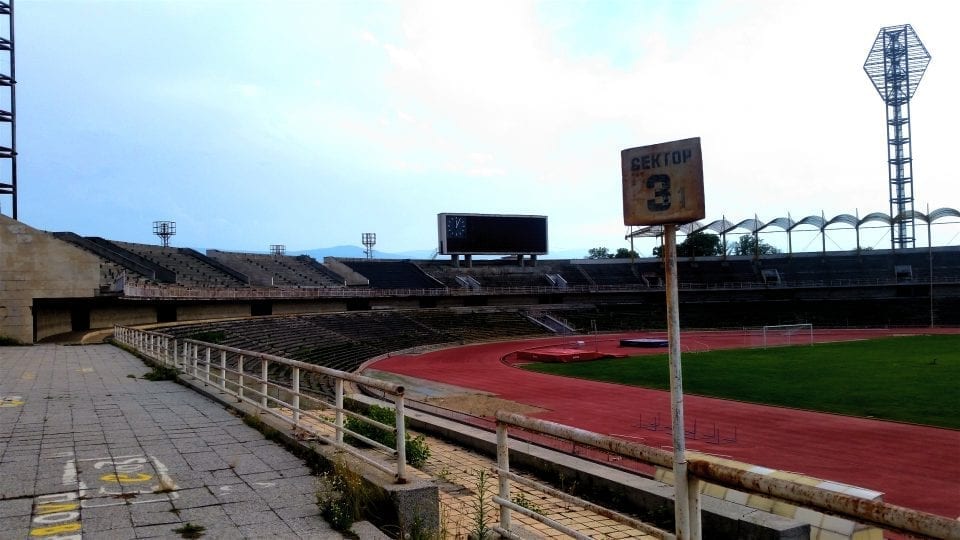 Is it abandoned or not? What will you say if I would tell you that we found an half abandoned stadium in Plovdiv?

The abandoned stadium is located in Plovdiv, the historic capital of Thrace and the second city of the country after Sofia’s capital. The stadium is out of the center, next to the “sports complex” and you can calmly get there with an half-hour of walk from the Roman theater.

Getting inside is not difficult, just you need to climb. By walking around the stadium, you can decide which route to take.

Plovdiv Stadium (Bulgarian: Стадион Пловдив), formerly known as 9th September Stadium, is a multi-purpose stadium in Plovdiv, Bulgaria. It is currently used mostly for athletics championships. The stadium holds 55,000. The stadium was built in 1950.

The stadium initially had a capacity of about 30,000 spectators and had lights. Near the end of the 1980s a substantial renovation and expansion began, but was never finished due to the lack of funding. The stadium’s present condition is dire, with no UEFA licence, no lights and only a few games played there (mostly junior teams). It is the only stadium in Bulgaria with two-storey stands. The biggest events held in the stadium were the 1990 Lepa Brena, 1999 Metallica concert and the Athletic World Championship for Juniors in 1990.

At a distance of 100 meters we see the stadium, surrounded by scaffolding and in some parts taken from the ivy. Many of the normal revenue was walled, others closed directly with padlocks. After taking a trip to the huge sports complex that surrounds the stadium, we get in through a “close-up” entrance.

We climb fast and in few seconds we are already inside. What we will see is only a quarter of the whole stadium. Many of the rooms – some of them really huge – are used as a storage room. Others, however, are full of rubbish and white bags that we do not have any idea of what could be. We climb the stairs to a corridor that will go all the way around the stadium. From there we get to the booths. The grass of the soccer field is cut off and in the distance we see someone running. “Is it seriously abandoned or what?” We ask to ourselves. In the booths the various chairs are covered and immersed in the weeds that make their way in the cement. Let’s try to reach what appears to be the main entrance, following the girl who mysteriously disappears from those parts. In a small building there seems to be a guardian’s house, with sloped doors and windows lined with railings. Inside a television, pots and sports equipment. We hear noises nearby, so slowly we approach the source to find out what it is. A motor noise suddenly shakes our heads and, without thinking twice, we move away quickly. We go down the same side from where we went up, checking that no one is in the area. We do not want to be surprised by anyone to have been inside the stadium at watching the game, without buying the ticket.