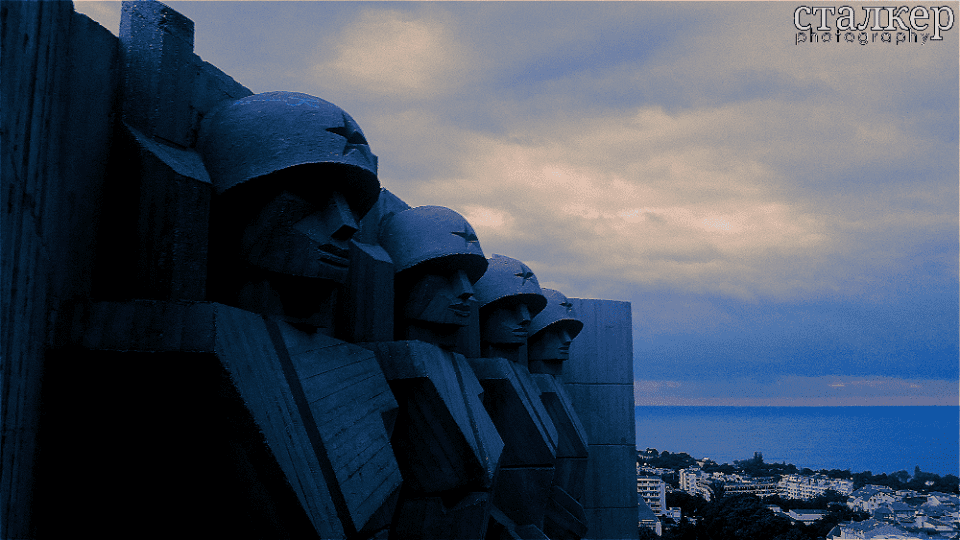 The giants’ voices leaped in the air to a height that none of us had ever dreamed of. They ran down the hill, cheerful, to the rhythm of Dimitri Shostakovich’s symphony № 7. Until the center of Varna they runs through stories and moments that some have never forgotten.

The Bulgarian-Soviet friendship memorial is located above the Turna Hill, about an hour’s walk from the center. When you ask for directions you will have no problems as the monument is known to anyone in the city.

In front of you you will find not something abandoned, but something alive. The area surrounding the monument is full of tourists who, for curiosity, came to take pictures. Often you can find someone jogging up and down the stairs.

The entrance is just behind the monument, passing through the bars of a gate. Often they tried to close the various entrances (yes, there were more than one) with bricks, concrete walls, ironed but all in vain. Someone has always been able to breach and create new entrances. Even here inside, as you are outside, you will have the pleasure to get acquainted with many people. In the time I was in, I became acquainted with a group of young bulgarians who were smoking weed, a urbex group from Belgium, an elderly gentleman, a couple of Polish and another large group, but as soon they have seen me and the Bulgarian boys, they run away. 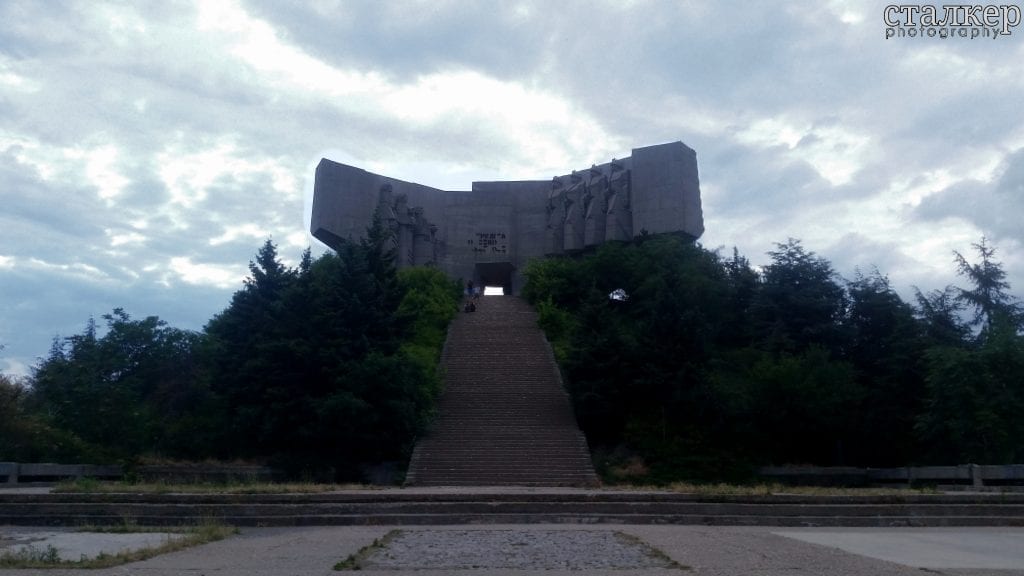 The idea of building the monument began in 1958 to commemorate the support provided to Bulgaria by Russia during the Russian-Turkish War of 1828-29. During that conflict, Varna’s siege had lasted two months. After landing on the north coast of the city, Russian forces established their own camp on a nearby hill called Turna Tepe while fighting the Ottoman forces who asseded the city. The monument had to be built at the same point where the Russian forces had been settled, then became a cemetery for all those who fell into battle.

The designers of the monument in Varna were an architect and two sculptors. Its construction began at the end of 1974 and 27,000 volunteer workers worked for four years to create the 400 square meter structure and platform on which the architectural work now stands. More than 10,000 tonnes of concrete and 1,000 tonnes of iron have been used. The monument remembers a bird of peace looking over the hillside across the sea, reaching Russia. That is why the base is so narrow, while the “wings” are wider. In front of the structure a large bronze cube had been raised, which would have to burn forever with a flame powered by some diesel pipes. Above the bronze sculpture were engraved some huge bronze letters. The main door alone weighed three tons. Under the main stairs leading to the monument there was a library and a bookshop. A total of 180 projectors were positioned to illuminate the monument at night so that could be seen far from the ships that were seeping into the Black Sea. Meanwhile, a megaphone system installed in the park welcomed visitors with the symphony № 7 by the composer Russian Dimitri Shostakovich. The monument fell into disuse after the 1989 political changes.

In front there are seven statues (each 11 meters high with a weight of about 25 tonnes): four Russian soldiers (right side) saving three Bulgarian women (left side). Women tighten in the hands some gifts: bread and salt, as well as Bulgarian national flower, the rose. The metallic letters on the façade, now heavily decayed and partially missing, could once be read as follows: “Friendship for centuries through the centuries.” The “scale of victories” has a width of 15 meters with a total of 305 stairs. In the surrounding area there are more than 20,000 decorative trees which have been planted to represent the fallen Soviet soldiers.The main theme of the monument itself is the welcome of Russian soldiers who have come to liberate Bulgaria’s siege of the Turks.

High 23 meters wide and 48 inches, there are innumerable underground rooms and tunnels, originally used for museums and memorials. The “embedded” star room at the bottom of the wall contained a museum dedicated to the Russian-Turkish War. Inside the left wing, the room with seating and steps, served as a small meeting room. A monumental plaque, located above the entrance gate (now almost unreadable), made a quotation from Georgi Dimitrov, Bulgaria’s first communist leader: “Friendship with the Soviet Union is as essential as the sun, the air and the water for all the living creature. ”

A large anti-aircraft shelter was built inside the hill. It is said that Varna has a very large and complex network of tunnels passing under the city, linking the various key points. You can easily see it by walking along the beach, keeping the park at your left. You will notice the entrance to these galleries once a while, wide enough to let us pass a car. You can sneak inside the tunnels that descend into the bunker through a tiny hole in the floor, crouching for several miles, passing through dust and dirt. Unfortunately, the doors at the end of the tunnel have been welded and sealed, preventing further exploration. 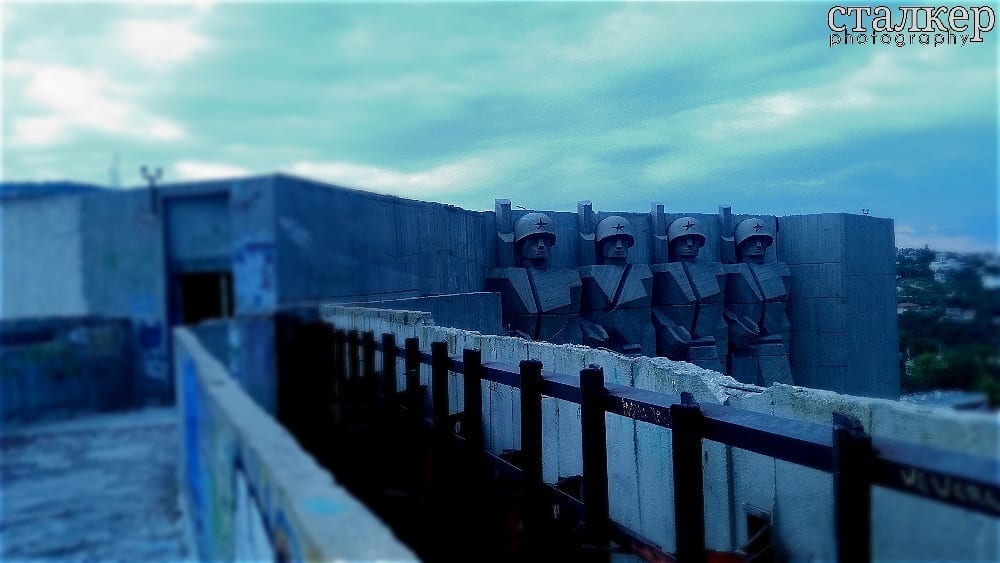 With you, you will definitely have to carry a light because inside the monument the sun does not penetrate. You will also need to be very careful while climbing the stairs and where you put your feet even when you are in the different rooms. The air you breathe is saturated of smelly odors. Vandal acts are present everywhere. Garbage is wherever and there is no wall that has not been graffitied. Often young, toxic, and couples looking for some adventure come to visit this place overnight. The purpose of anyone entering this concrete cluster is to get to the top and observe the statues “face to face”, talk to them, and occasionally, even some selfies. There are several ways and stairs ramps with which you can reach the summit more or less quickly. Upon reaching you will enjoy a 360 degree view of Varna. In the west the Black Sea, stretching your eyes and  your mind you can even reach mother Russia.