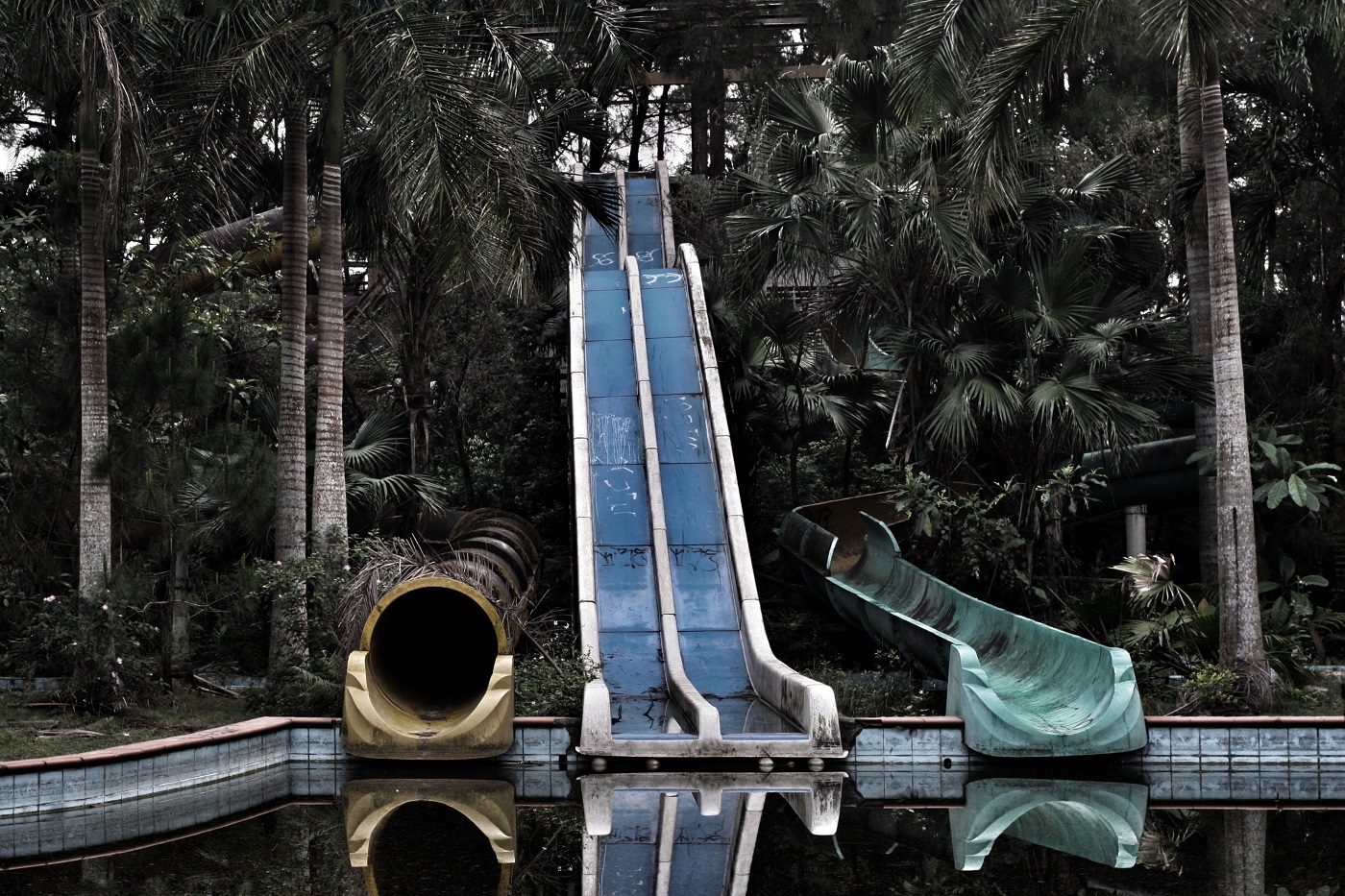 It was 5am when the bus dropped me out somewhere outside Hue, an ancient city in Vietnam.

It dropped me far from the city center but near the place which I wanted to visit. Today Stalker welcomes you to visit one of the most famous abandoned places in the world – Ho Thuy Tien abandoned water park.

After having a short breakfast, at 6am I was already in front of the entrance to water park. Fast glance to maps.me and I understood that here is “official” entrance to the place where they take fee to enter inside, while unofficial and free entrance is from another side, so I went there. 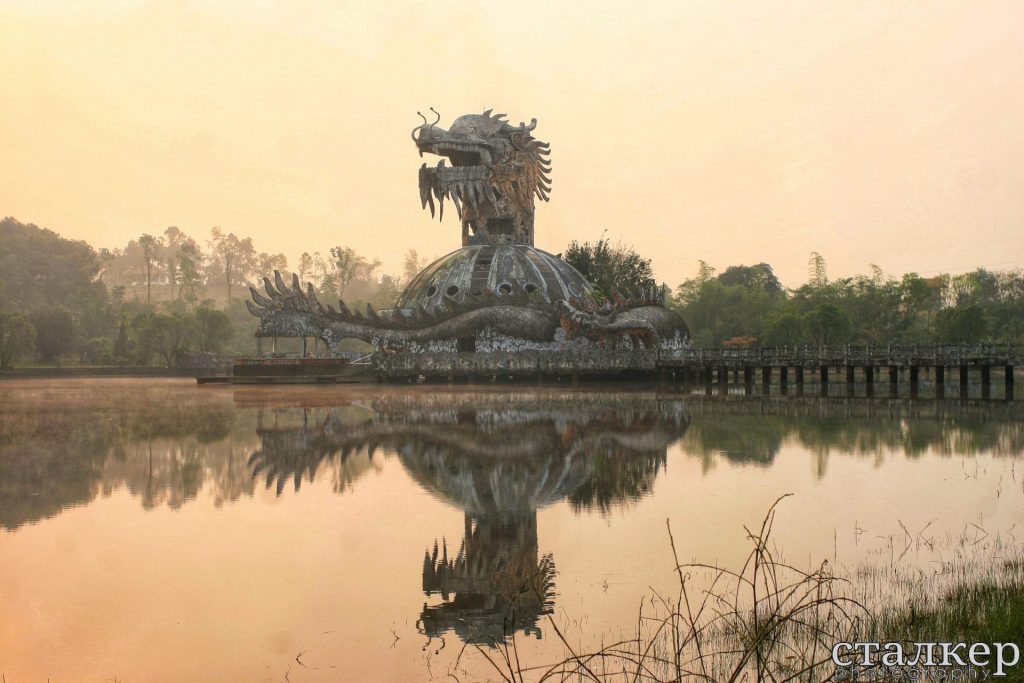 It was not a real entrance but just a normal road, used by locals who already woke up by that time. I asked one of them if I can leave my backpack inside his house and the man understandably allowed me, meanwhile pointing to the water park and asking if I want to visit it.

-of course! I tell him and after that disappear in my exploration. 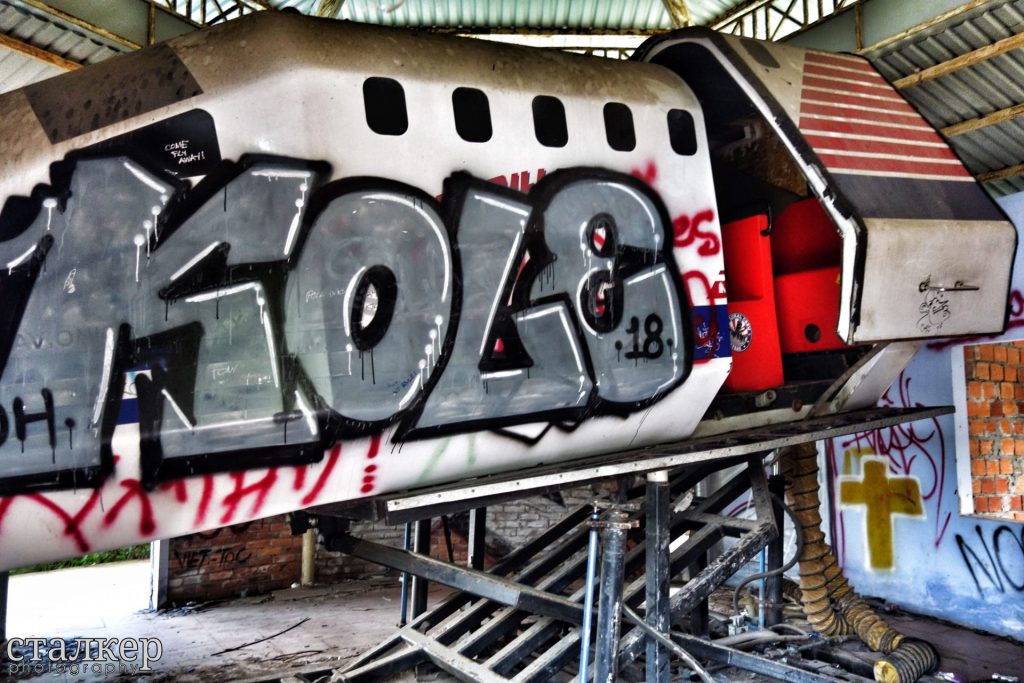 …beautiful sunset meets me on my way. Huge lake, forest and lots of statues – these was what I saw first of all when entered this place. Birds were singing and cows were mooing while I was taking photos of abandoned water park. The atmosphere inside was absolutely peaceful and I was enjoying my time there! 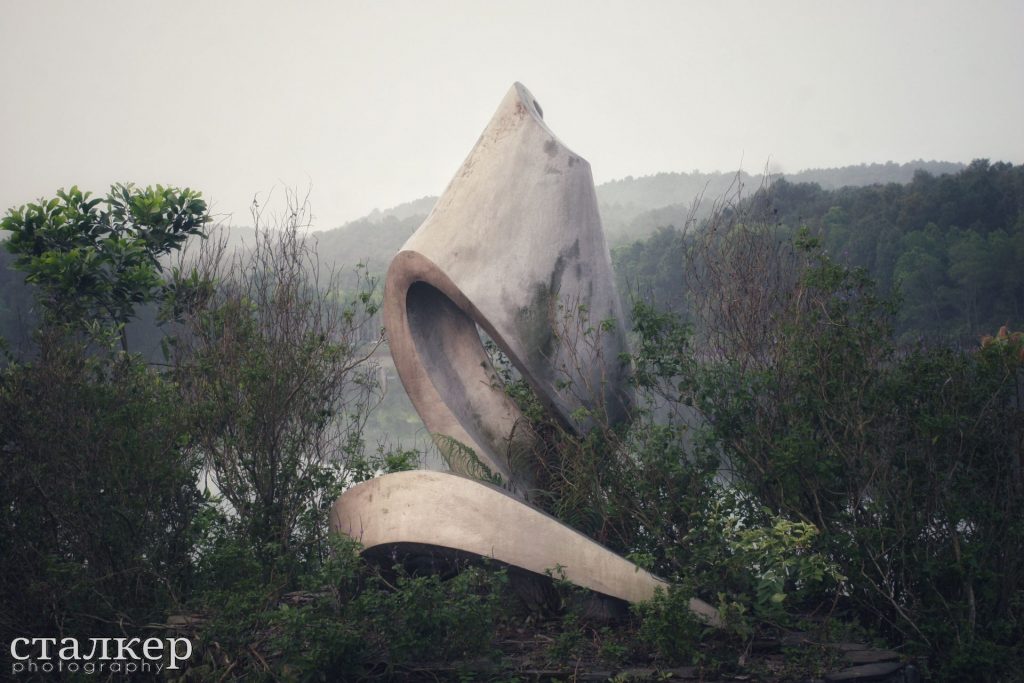 The abandoned water Park was built in 2004, and its cost was around three millions dollars. The initial idea was to create a family water park with amusement rides, slides, pools, shows and an aquarium. But that didn’t work out and soon after opening the water park was shut down. 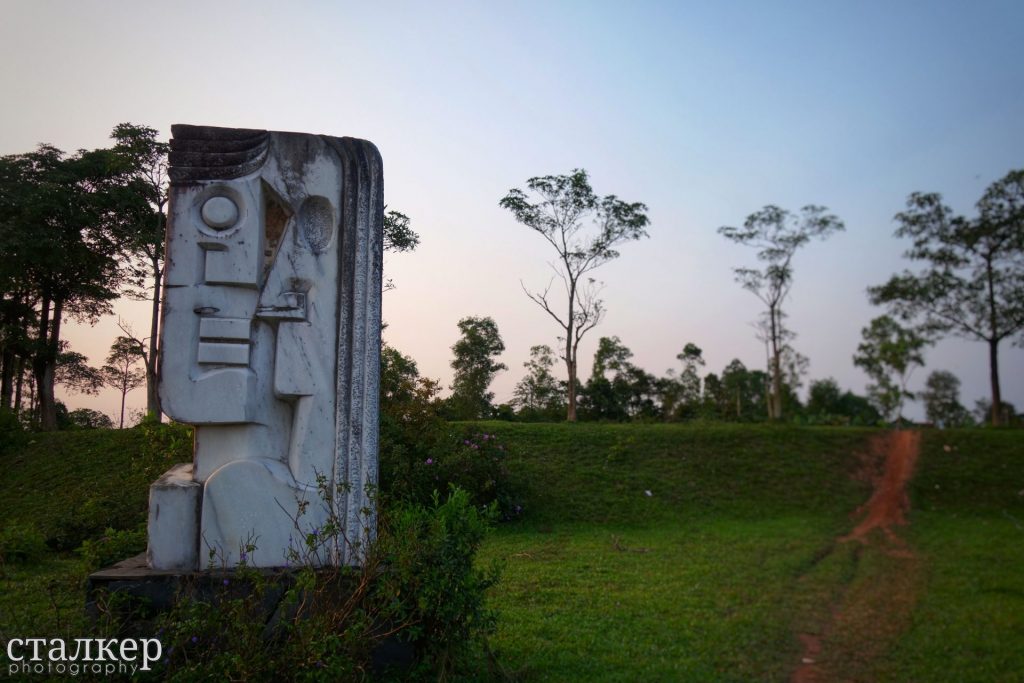 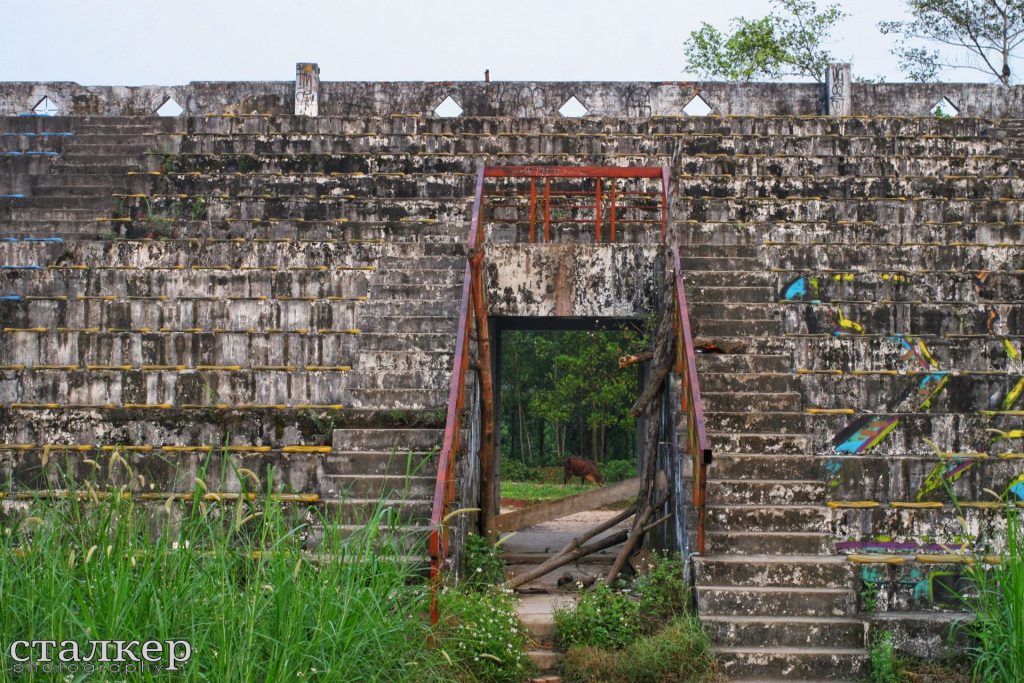 There is not that much left from this place nowadays and every of its “attractions” are pointed on maps.me.

The first one was water park stadium where probably they planned to have some performances with sea animals. 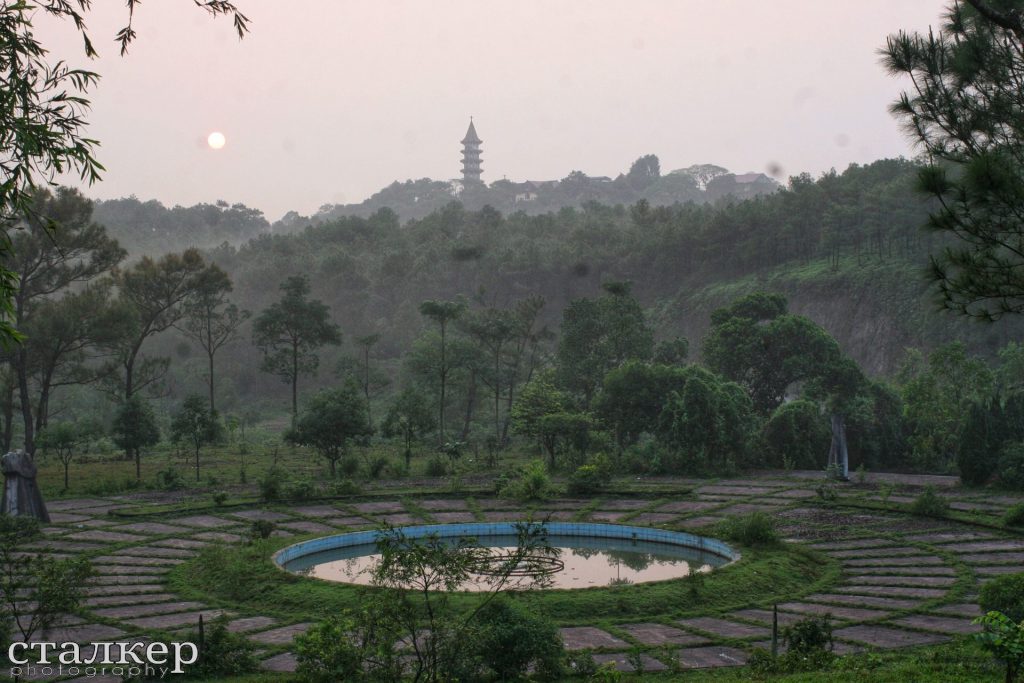 There is a lot of glass there so be careful while moving. Here I’ve heard some people noises and hurried to hide somewhere without noticing the glass so I injured a little bit myself.

Next was a “crocodile” swimming pool with three slides and pools. Long before here after abandonment by legends were living crocodiles but then government put them away.

Dragon aquarium is the main point of this place. This is what you usually see in the reviews of trying to search the best abandoned places in the world. It was amazing, it was stunning. I took like 1000 of photos of it from far before even being able to reach it.

And then I reach it. It’s so huge! I come inside it and here I can observe the entrails of the dragon. His tail, his lounges and his teeth. Inside was dark so take your light in case!

When I come up by stairs, following the dragon from tail to head, I reach the highest point of this water park. From here I can observe all the park, it was absolutely spectacular view! I stay there for a while to do some photos of me inside the dragon mouth and then go away, absolutely happy to being able to visit such place. 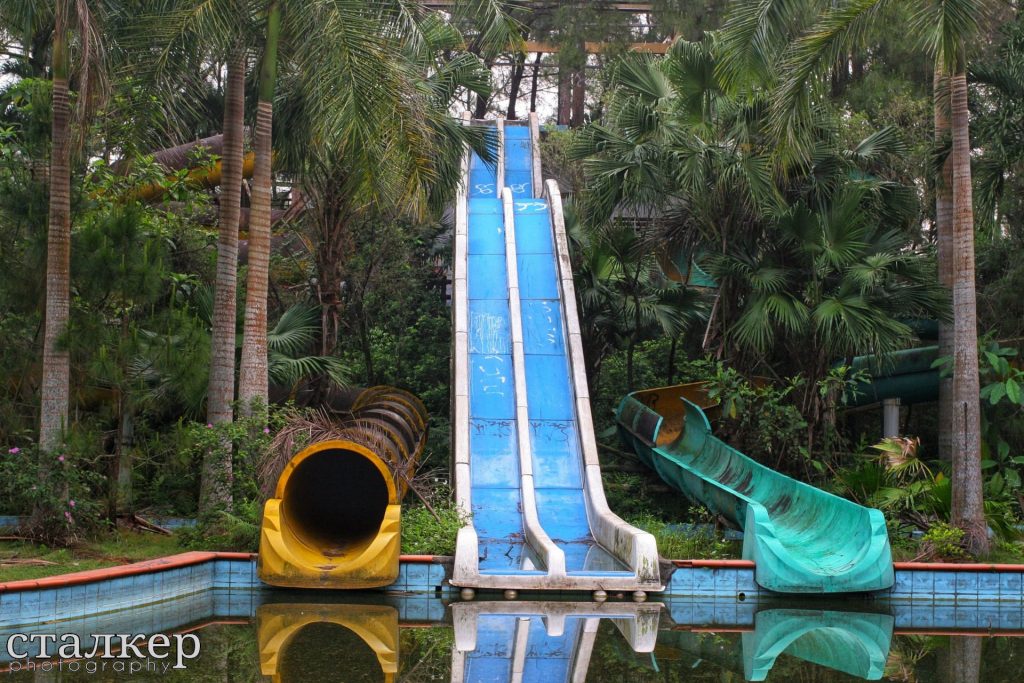 We return here together during the evening. This time is sunset and the atmosphere is absolutely different. This time here we see tones of snorkeling here and there European tourists on their motorbikes. We feel a little bit disappointed and we stop one and ask why are they here? Do they also enjoy urbex?

-You can do here lots of beautiful photos and it’s so creepy here, was his answer.

We smile inside ourselves and thank him for answer and continue our own exploration. This time we meet even with guardian but he doesn’t ask for money just says us that in 20 minutes the place will be closed. We laugh again:

-How can you close something without a fence?

But when the time passes he starts to bother us and make us to go away even though we didn’t have time to visit everything we wanted one more time! But he is depth. So we leave this place one more time, but this time not so happy as the place with lots of tourists lost all its sharme…