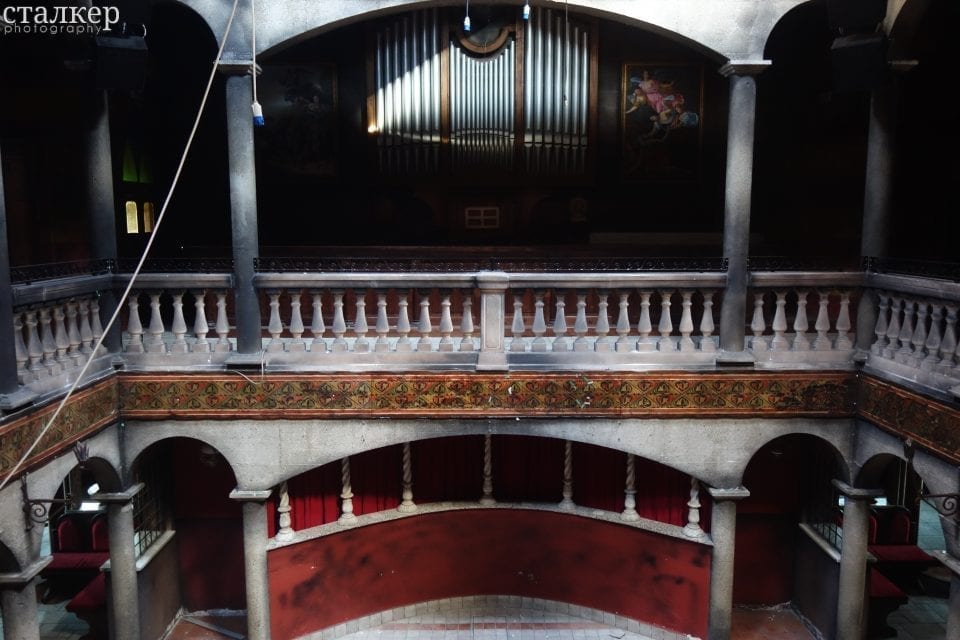 It was the 2000s when a master brewer, in the “Bassa Pianura Veneta”, had the unique idea of opening a restaurant in two airliners.

The place in question is located in Villamarzana, near the Transpolesana highway. It is possible to park your vehicle in front of the entrance gate or even better in the side street.

Any entry into the restaurant area is possible through a gate left open. As for the first building – whose interiors closely resemble those of a church – it is easily accessible through a broken window in the back.

To reach the planes you can play a game of nets, and go through a hole previously opened by some explorer. The latter are very well visited, and the glass doors destroyed. So just go up the stairs and you’re done.

As for the second building – which houses a copy of Michelangelo’s Moses -, you can safely pass through a door with the broken glass. 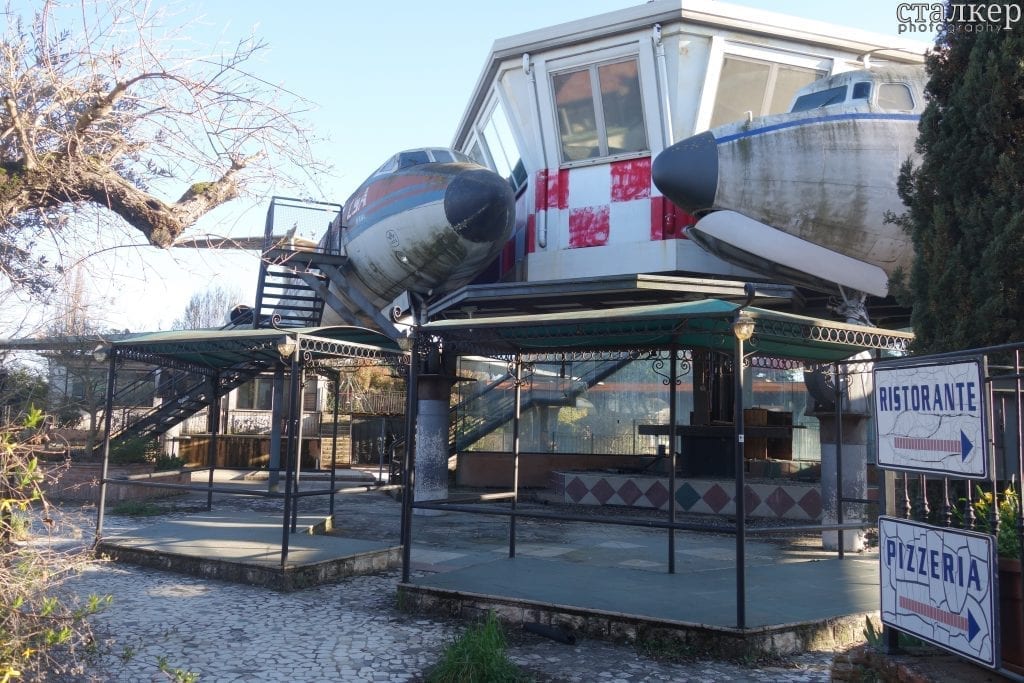 A master brewer and his dream

In 2000 a master brewer fulfilled his dream: to open a restaurant housed inside airplanes so as to allow to anyone, entering it, to feel the thrill to be on a plane at least once in their life.

In addition he decided to open two restaurants with annexed replicas of the works of masters such as Michelangelo and Leonardo Da Vinci. So he opened the catering spot inside a Douglas DC-6 and a Tupolev TU-145.

After 14 years of legal battles with the municipality, he was forced to abandon his dream. The catering point was closed and the aircraft wrecks still lie motionless in the battlefield.

The “legal battle” began three months after the opening of commercial activities, on November 14, 2000. The municipality contested a building abuse by Michelangelo Da Vinci Srl. The entrepreneur defended himself by saying that everything was only for the purpose scenic. That said, they imposed a fine in the court that has the exorbitant: One billion 252 million and 480 thousand lire. 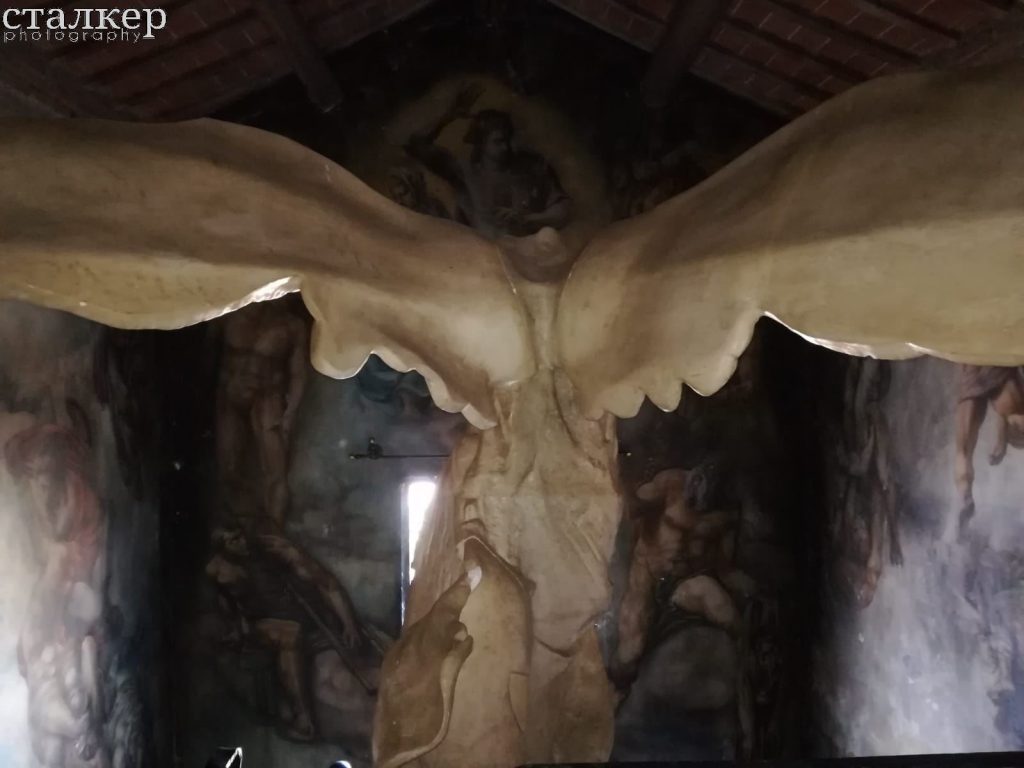 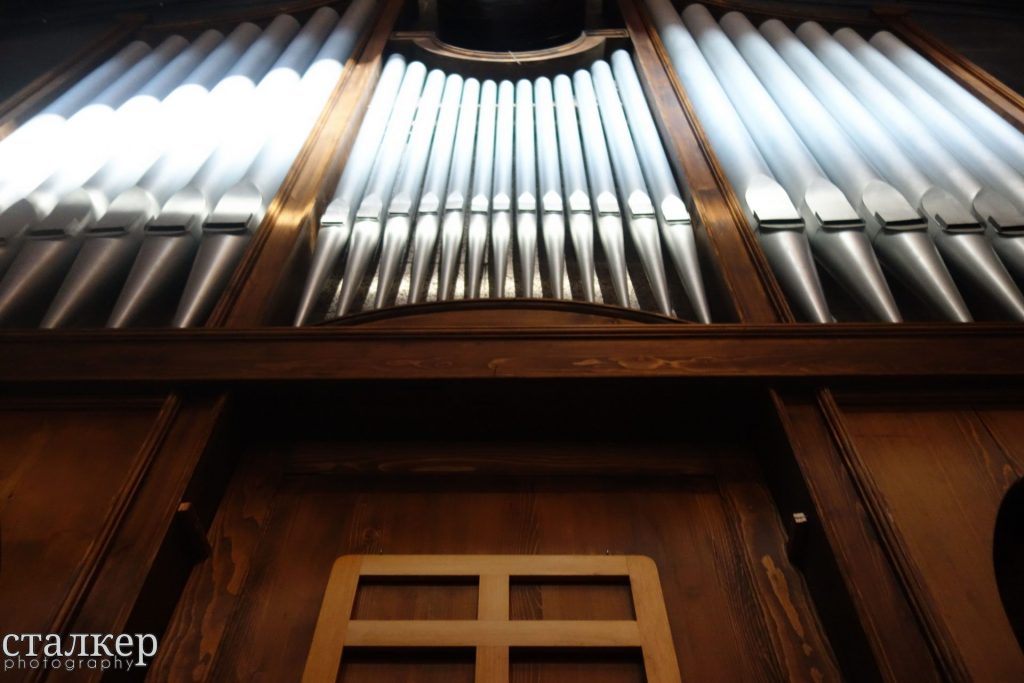 A negotiation began between the two parties that led to the regularization of the premises. The municipality succeeded in collecting part of the fine, remaining just over half a billion (280 thousand euros).

After 15 years the company no longer exists, and the municipality has nothing to do but sit empty-handed without having collected the remaining cash. 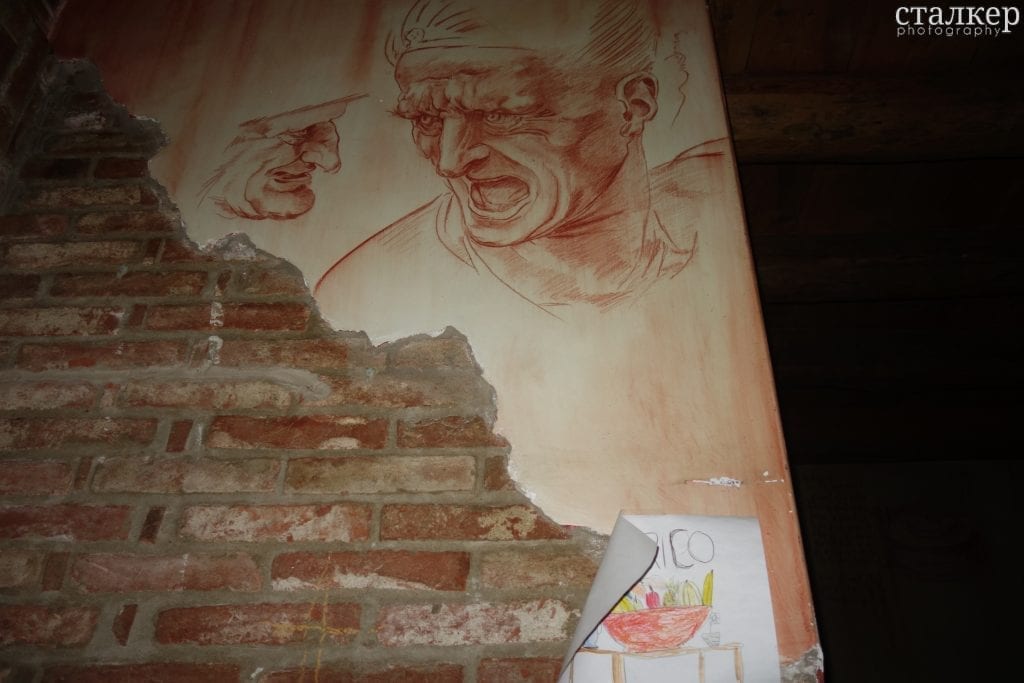 It is a very fragrant spring day, with the heat that barely touches the head, and the wind that blows gently. We arrive in the early afternoon, and leave the car in front of the entrance gate.

Without any hurry, and following the rhythm of the day, we pass through the gate. About ten meters ahead we find ourselves facing a probable entrance: a window that lies in pieces. A game of legs and here we are. What awaits us surprises us somehow. Having only the photos of the two planes, we entered this restaurant waiting for a completely bare building. Instead the extravagant mind of the owner of this former restaurant has included some particularly unusual and a bit “trash element” in a restaurant area. 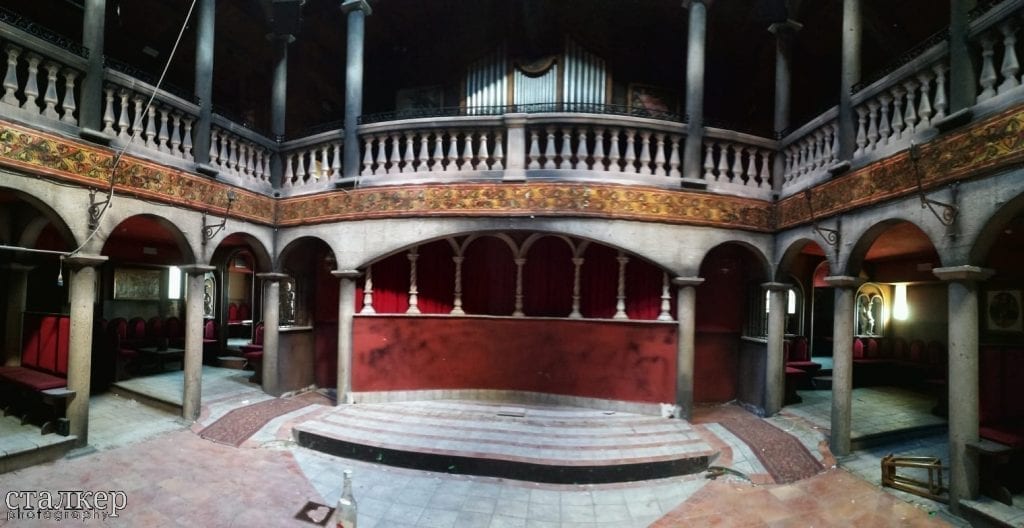 Images of saints, walls painted with scenes from the Bible, armchairs in faux red velvet, cherubs placed here and there in the various rooms. We raise our eyes to the sky and we find ourselves before an organ. Yes, a church organ. This becomes more and more unusual and atypical once the first floor is reached. Here we encounter confessionals, the altar and a face-to-face meeting with the organ. The atmosphere becomes sacred and ecclesial, mingling with the “culinary” atmosphere of the tables and the bar table hidden behind the red curtains. “How could a customer ever feel comfortable in such a place?”, I ask to myself. We leave the first restaurant by going backwards, stopping for a sip of wine at the only table in the middle of the central hall. Time for some scenic photos.

We go slowly through the window from which we entered and, trying to find a way to reach the planes, we look at a gate left open nearby. We cross it and here we are in the most photographed area of the entire catering point. The two planes that go to form a triangle lie motionless, almost as if they were models, ready to receive another daily dose of photographs. Near a swimming pool full of brackish and rain water, there are some floating toys abandoned in the center. A little further on a series of mirrors runs along part of the perimeter. We dedicate ourselves a moment to adjust our image. 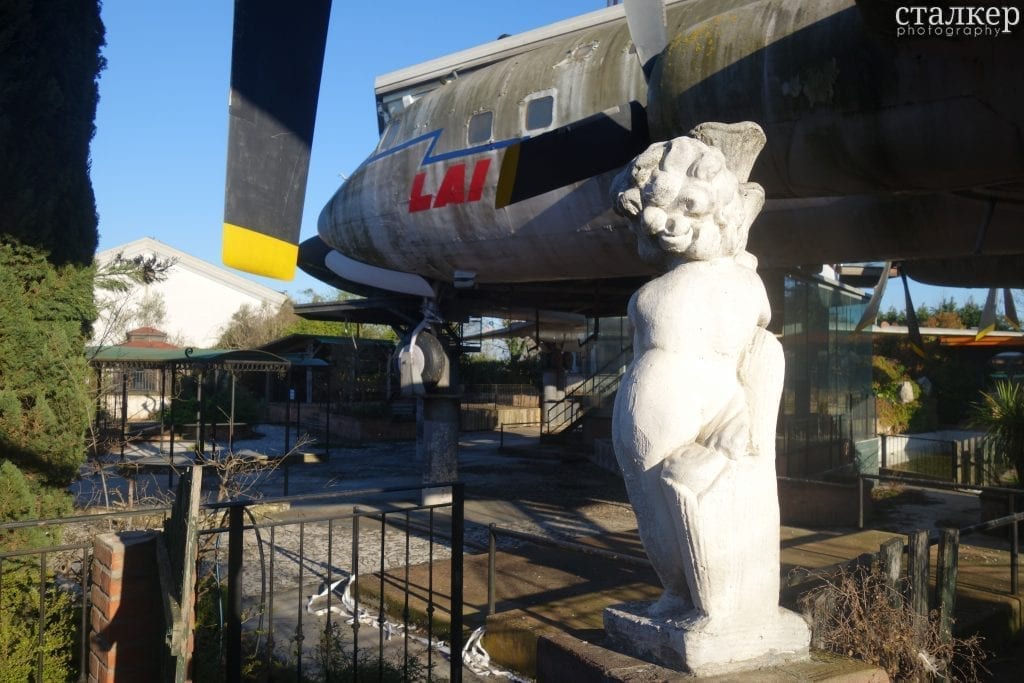 Continuing along the same road and passing next to a side gate, we arrive in front of the gazebos, where below there are some benches. A sign shows us a shop nicknamed “Ca ‘degli Ingordi”. Just at that moment we get a certain hunger.

Marching in front of all the replicas of statues that are positioned a little here and a little there we prepare ourselves to reach the summit. Here we are, in our moment of glory going up the ramp to reach the two airplanes. We pass through a broken glass previously and we can finally say we have taken the flight! The interiors are in all respects equal to those of any airplane, with only the addition of a few tables positioned between the seats and the others. The cockpit remains completely identical, without any modification.

We leave satisfied the two planes, when we still miss the last restaurant to visit. We reach it by passing through a glass door, then sneaking through a semi-open wooden door. Here we are in another dimension, where the works of Michelangelo and Leonardo come to life. Also here, as outside and in the previous restaurant, various replicas and paintings dominate and rule. Some glass tables are supported by busts and horse heads, while in one of the dining rooms there is a statue embedded in the table glass.

Near the entrance door that leads towards the garden there is a sort of hole dug into the ground with a grate and a statue inside. Everything reminds me of and think of ancient Rome where, before a battle in the Colosseum, the gladiators were locked up and waited for their turn to fight. Not far away is the kitchen, where dishes and cutlery lie in absolute silence.

On the second floor we come across the most spectacular “frescoes”. Here we can enjoy the “Last Supper”, and sit at the table with the apostles and Jesus ready for a photo together. Not far away we find the confessionals again, where we can finally confess all our sins with the only problem that the priest is missing. A nearby table was structured so as to have a hole in the center with several human-sized brushes inside, and different colors on each side of the table. In the middle of the other room, imposing and colossal, in all its beauty we glance at Michelangelo’s Moses. He invites us to sit with him, giving us two chairs and discussing what lies beneath his thick beard. Behind him another masterpiece of art by Michelangelo, or rather “The Creation of Adam“. Here we remain dazzled, and we repeat once more between us and us that a weirder place than this we could not have found.

After this journey into the fake Italian Renaissance we retrace our steps, thanking the surrounding place for giving us such a memorable exploration. 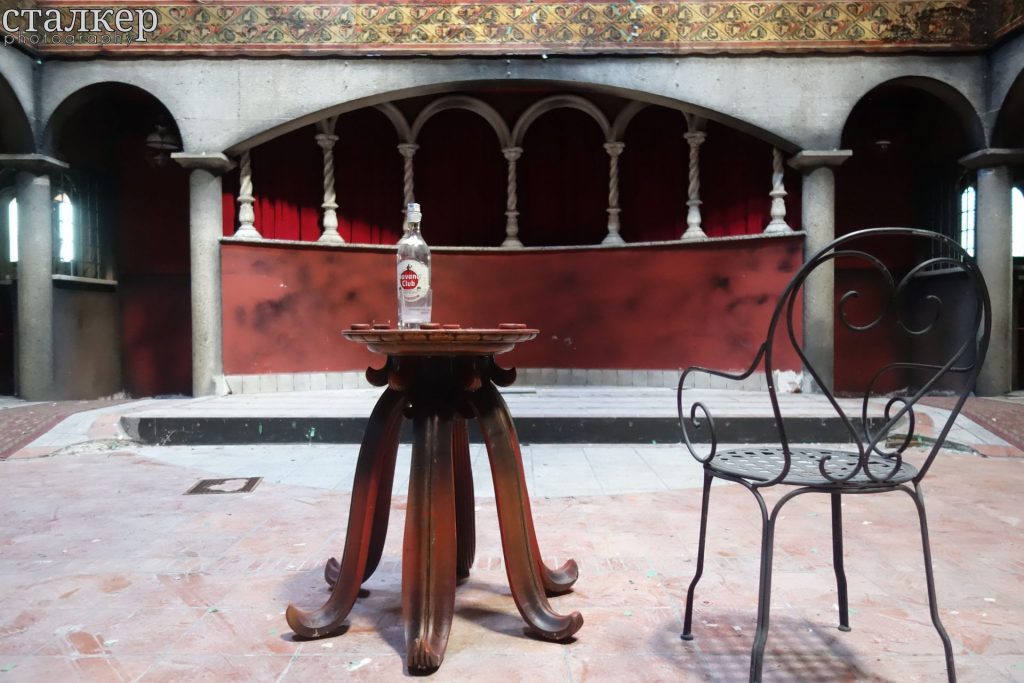