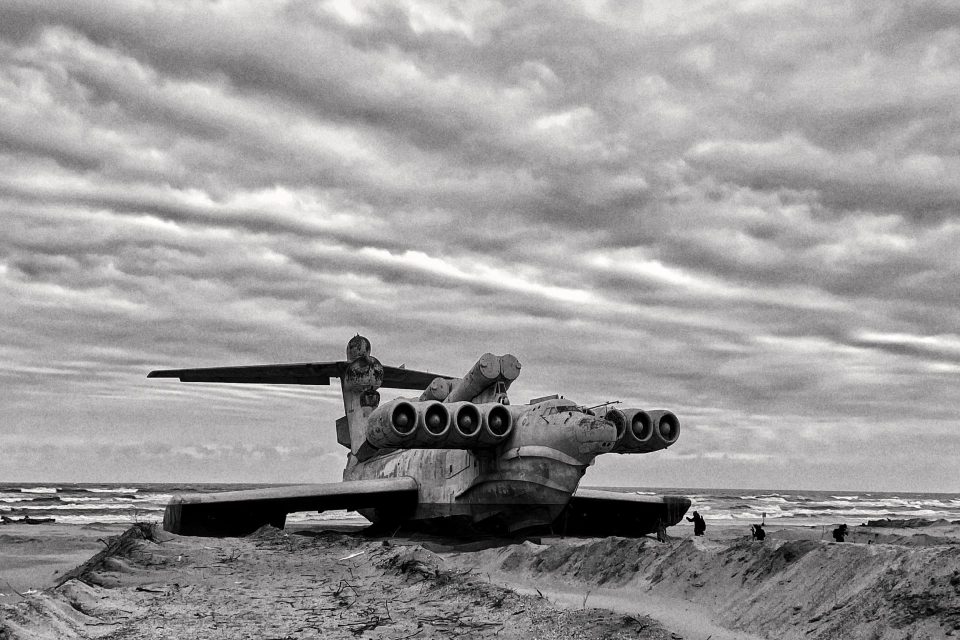 The ekranoplane, the Soviet pachyderm of the skies beached on the shores of the Caspian Sea.

The massive Soviet-designed and built ekranoplane (Lun-class ekranoplan) is located on the Caspian Sea coast near the city of Derbent in the Dagestan region.
On July 31, 2020, it was transported to the Caspian port after decades of neglect along a beach in Dagestan. The trip took about 14 hours. The Russian Ministry of Defense reported that the aircraft will end its days at this port, where it will be dismantled.

Lightning fast and invisible to radar, he was considered a formidable war machine before being discarded forever. An ekranoplane (экраноплан in Russian, ekranoplan) is a type of aircraft that can be considered the link between the seaplane and the hydrofoil.
Lun Model
Lun’s model is quite unusual: 74 meters long and 19 meters high, it is equipped with 8 turbojet engines and 6 anti-ship cruise missiles; it could reach a speed of 550 km/h and an autonomy of 3000km or 5 days.

This type of aircraft moves by flying a few meters above the surface (usually over water, but also over ice or land), exploiting the so-called “ground effect”. Basically, once the medium has accelerated, what can be defined as a dynamic air cushion develops underneath it. It is able to land above any surface even without a runway.
This aircraft was to be used to combat enemy aircraft carriers, as it was assumed that its ability to fly close to the surface of water or land would allow it to evade the enemy’s radar systems.

It was designed in the ’80s by the Soviet Alekseyev Central Hydrofoil Design Bureau, but this type of vehicle was developed by the Soviets since the ’50s. Their inventor was the Soviet naval engineer, Rostislav Alekseev, and an Italian from Fiume, Roberto Bartini, who emigrated to the USSR in 1923 for political reasons, also contributed to the work.The Lun version, launched in 1986, was the only one to be built.

Collapse of the Soviet Union

After its launch, this extraordinary aircraft was transferred to the Caspian Flotilla of the Russian Navy for final testing. The project was ambitious, but did not find in practice the success it promised in theory. Management costs were high and the collapse of the USSR in 1991 took the designers and the military by surprise. The tests were suspended, the ekranoplane was removed from the fleet and parked in the city of Derbent, Dagestan.

Already during the time of the Soviet Union there were questions about the proper use of the Lun. After the accident of the Soviet submarine Komsomolec, in 1989, which resulted in the death of 42 sailors, it was decided to build a new model, which would take the name of Spasatel and would be equipped for search and rescue operations of missing at sea. It was therefore expected to be unarmed and the engines, from eight, were reduced to six. It would have had a human carrying capacity between 150 and 500 people. This project was also abandoned with the dissolution of the USSR, although the aircraft was now almost finished and ready to become operational. It is still in the Nizhny Novgorod shipyard and Russia, in 2017, announced that it would put the ekranoplanes back to work, but no developments have been seen since then. Moreover, both examples, while well preserved, show the signs and damage of nearly thirty years of neglect.

Before Lun other ekranoplanes had already been put to work. The most famous operated in the sixties. It was called KM, or Корабль-макет, which translated from Russian means prototype ship. It was a secret defense project, so much so that the Soviet Union made it fly only at night, in order not to be seen by American spy satellites.

It was later renamed the Caspian Sea Monster, after an episode that involved the CIA. The secret project of the Soviet KM was discovered by the United States in 1967, when photographs taken by satellites showed it taxiing during tests near Kaspiysk. The strange aircraft baffled Western intelligence agencies, noting its small, stubby wings despite its large size, as well as the KM markings and the Soviet Navy flag on the fuselage. It was the CIA that labeled the plane as the Kaspian Monster after seeing the KM markings, later becoming known as the Caspian Sea Monster while KM meant something else entirely. The discovery, at the height of the Cold War, greatly concerned the CIA, which set up a dedicated task force and developed a purpose-built unmanned drone just to determine what the secret behind that vehicle was. Initially, the KM was thought to be an unfinished conventional aircraft, but it was quickly determined that the vehicle could not fly high. In the 1980s, after the KM had already been destroyed, the United States discovered that it was a large ekranoplan. The development of ground effect vehicles was not as widespread in the West as it was in the Soviet Union.
This video shows the actual size of the aircraft compared to the boats:

Many thanks to Sofya (https://www.instagram.com/flempymagique/) who kindly passed the images on to us.