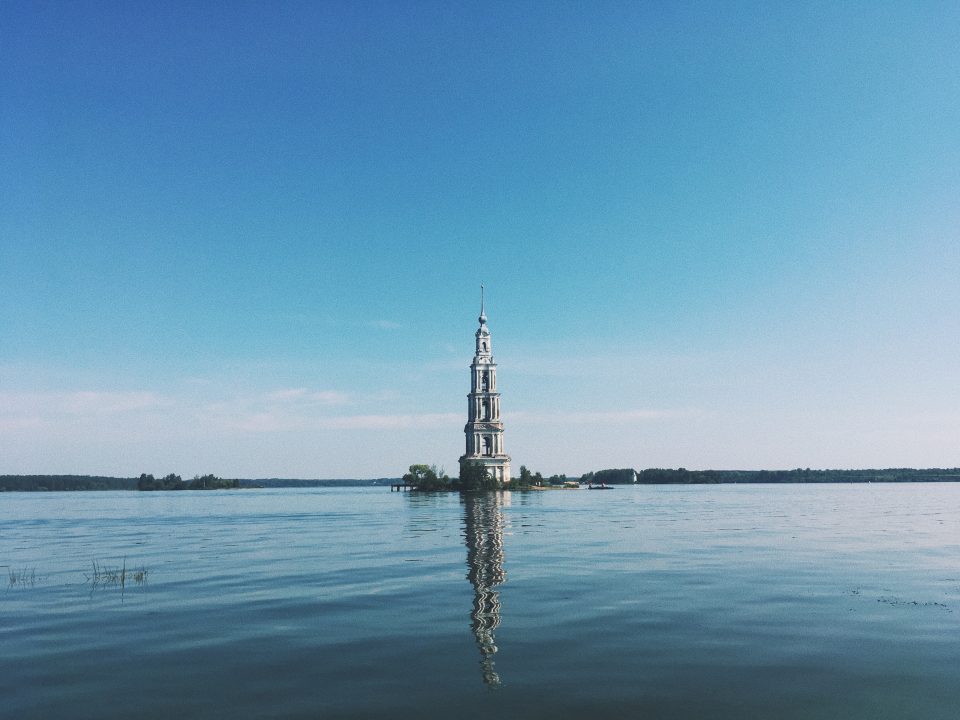 It was lovely end of July when in Russia finally came summer and I decided to explore some small cities nearby Moscow. It was this belltower that I always wanted to visit and so it was decided to make my dreams come true.

Belltower is located in Kalyazin, small city in Tver region of Russia. You can get there by boat (circa ~10 Euros), or by swimming as did I. Unfortunately the belltower itself is closed so it is impossible to get inside.

The steepled belfry was built in 1796—1800 as part of the Monastery of St. Nicholas, with a pentacupolar katholikon dating from 1694. Of its 12 bells, the largest weighed some 17 thousands kg. It was cast in 1895 to commemorate the coronation of Nicholas II of Russia.

By the 1940s, the Volgostroy project was approved. It provided the artificial expansion of the Volga River, the creation of hydroelectric power stations in its water area. When creating the Uglich Reservoir, the old part of Kalyazin ended up in a flood zone; the cathedral was dismantled, and the bell tower was left as a lighthouse. As soon as the loaded barges began to walk along the Volga, it became clear that it was impossible to focus on other signs, since a very sharp turn of the river lay here. In archival documents of that time, the bell tower appears as a lighthouse (hello Soviet atheistis times!!).

In Soviet times, there was talk that the bell tower should be demolished. It was said that it was advisable to disassemble it, since it tipped slightly due to the weakness of the foundation, but in the late 1980s the foundation of the bell tower was strengthened, an artificial island with a pier for boats was created around. On May 22, 2007, a divine liturgy was performed in the bell tower. Since then Orthodox Christians hold a Divine Service in the belfry several times per year.

As it happens with some abandoned places…somewhere in Berlin, it becomes popular among normal tourists. The same story happened here, in Russia! I didn’t expect that, though when I come to the “view-point” I see around some tourist souvenir shops. People were selling even magnets with this abandoned bell tower! As well there were some other typical Russian souvenirs, that someone was bying.

Already before I decided that I will reach this bell tower by swimming, though when I stay there in my swimming suit in front of all these tourists who want to reach the “site” by boat, I doubt for a little bit. But then I put away all my worries and start coming inside this dirty green water of river Volga.

20 minutes that seemed like infinity and here I am, proudly staying on the small island. The bell tower nearby looks more interesting. Unfortunately I couldn’t take camera with me so I try just to remember this moment. Here and there around me while sunbathing sneak some tourists with camera. I try to not notiсe, turning instead my face to the sun’s rays, which were so rare this summer. A long-long journey back to the continent is waiting for me and soon I will be ready…